US basketball star Brittney Griner’s wife has called the situation ‘really difficult’ ahead of Griner’s trial in Russia for possession of narcotics after she was found with a vape cartridge containing hashish oil in February.

Griner’s wife Cherelle spoke about Griner’s detention to CNN and said it is ‘not a situation where the rhetoric is matching the actions.’

She said she does not think the ‘maximum amount of effort’ is being put forward to get Griner home.

Reports indicate that Griner’s fate in court is linked to notorious Russian arms dealer Viktor Bout, who earned the nickname ‘Merchant of Death’ after selling weapons around the world.

Bout is currently serving a 25-year federal prison sentence in the US, and Russian officials have indicated they want him returned to Russia.

It appears that Griner’s arrest may be an effort by the Russian government to force the US to exchange Bout for Griner.

Prosecutors said Griner is being charged with intentionally transporting narcotics after Griner was found with the vape cartridge at Sheremetyevo International Airport outside Moscow in February.

Griner wore a Jimi Hendrix t-shirt and was placed in a cage in the courtroom as three members of the US embassy looked on. The trial had a limited media presence at Griner’s request.

Griner’s trial was adjourned on the first day after witnesses failed to show.

Griner’s wife said Griner called the US embassy 11 times and did not receive a response, saying ‘you don’t have my trust at that point, until I see actions.’

When questioned about the idea of a prisoner swag involving Viktor Bout, Griner’s wife supported the idea, but says she never thought Griner would be involved in something like this.

Calling her Griner by her initials ‘BG’, her wife said ‘Can they get something in return for BG? Yes they can? Are they willing to do that? Yes, and at this point I want them to.’ 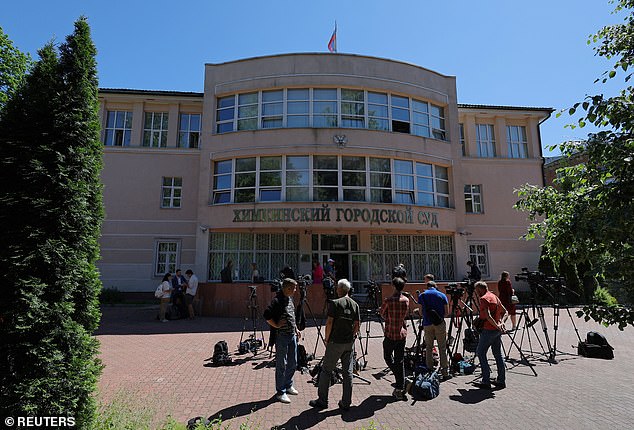 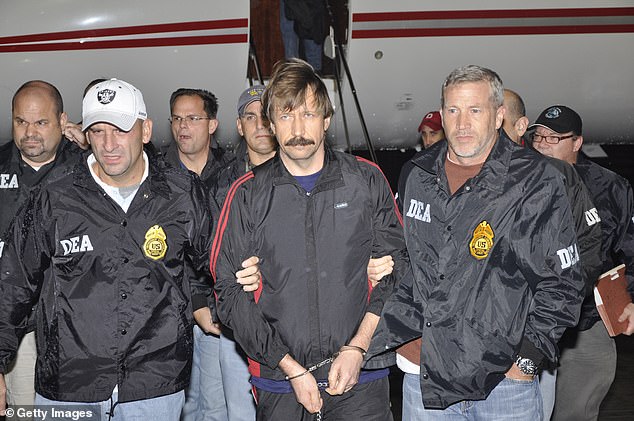 Viktor Bout, a Russian arms dealer known as the ‘Merchant of Death, after being extradited to the US in 2010. Russia may want Bout released in exchange for Griner’s freedom

In May, the US State Department said Griner was ‘wrongfully detained,’ hoping to put pressure on the Russian government to release Griner, who’s case has attracted considerable media attention in both countries.

‘The Department of State has determined that the Russian Federation has wrongfully detained U.S. citizen Brittney Griner. The U.S. government will continue to provide appropriate support to Ms. Griner and her family. We will continue to ​press for her release.’

Instead of having a jury trial, much of the outcome of Griner’s trial will be left to the judge, who will review prosecutors case files and question witnesses. The judge can also ignore any of the evidence presented by Griner’s defense if the evidence is left out of the prosecutors files, which often happens.

Elizabeth Rood, Deputy Chief of Mission at the US Embassy in Moscow, spoke to the media at the trial, saying Griner asked her to ‘convey that she’s in good spirits and is keeping up the faith.’

But Rood echoed the sentiment of the State Department and called Griner’s detention ‘unacceptable’ and added that wrongful detentions ‘endanger the safety of everyone travelling, living, working and studying abroad.’

‘I can assure you that the United States government at the very highest levels is working very hard to get Miss Griner home,’ she said.

But Griner’s wife Cherelle, who just finished law school, said she is discouraged by the efforts of the American government, adding ‘I’d love [President] Biden to tell me he cares.’

She said Griner voted for Biden in the 2020 presidential election and ‘took that conscious decision to trust in him and his administration.’

The basketball star was heading back to the US at the time of her arrest, after playing with UMMC Ekaterinburg of the Russian Women’s Basketball Premier League.

Griner is a highly successful basketball player in the WNBA, being voted an all-star eight times and leading the league in points-per-game for two seasons. She has also won two Olympic gold medals.

She was a standout player in college at Baylor University and first gained widespread attention when she dunked in a game, becoming the seventh woman ever to do so.

After being picked first in the 2013 WNBA draft, Griner came out as lesbian and signed an endorsement deal with Nike, making her the first openly gay athlete to do so.