The infuriating decision that sums up Knights’ horror run: Newcastle kick a penalty goal despite being down 26-0 after woeful first half – and things got FAR WORSE from there

Down 26-0 just before halftime after a shocking display at home, the Knights were given a penalty and a chance to launch an attacking raid, score a try and give their suffering fans something to hang their hopes on.

Instead, they decided to kick a penalty goal and sent their supporters – and the Melbourne Storm – the message that they have all but given up.

Adam O’Brien’s team were smashed from pillar to post at home last week against the Eels, who blew them off the park 39-2 and kept them tryless.

The Knights gather in their in goal after letting in a try. They must have worn a hole in the grass as the Storm crossed the line nine times courtesy of some shocking defence

They owed their supporters a far better effort against Melbourne on Sunday, but gave them more of the same instead – and the penalty decision was the cherry on top for footy fans and commentators.

‘Not one of the biggest moments in the club’ history,’ added caller Andrew Voss.

‘At 26-0 down I thought Newcastle were gone, but this penalty goal gets them right in it,’ tweeted the Former Legend account.

At 26 – 0 down I thought Newcastle were gone, but this penalty goal gets them right back in it.#NRLKnightsStorm

‘Comeback’s on!!!’ joked a very Bec Prestwidge, who was about as sarcastic as tys_1993, who wrote, ‘Fox commentators super disrespectful and condescending towards Newcastle Knights. Great 2 points Clifford!’

One of Justin Olam’s two tries summed up how spiritless the Knights were, with four tacklers including recently re-signed star and skipper Kalyn Ponga getting pushed off like under-12s players. 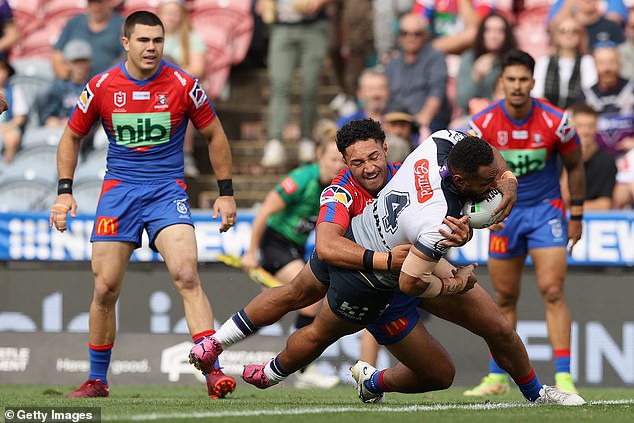 By the 60th minute the Storm had eclipsed the beating Parramatta handed out seven days beforehand, running the score up to 42-2 through two tries to Olam and three to Xavier Coates, with Jahrome Hughes, Tepai Moeroa, Nick Meaney and Cameron Munster also crossing the stripe.

Errors hammered the Knights, who could only complete 50 per cent of their sets and came up with no line breaks with 10 minutes left in the so-called contest.