THERE was mutiny in the air at Molineux as Leicester produced a clinical display to move off the bottom of the table with their first away win of the season.

Davis has been left in charge until the New Year after Wolves put their search for a new manager on hold, and fans chanted ‘Scott Sellars, get out of our club’ in the second half. 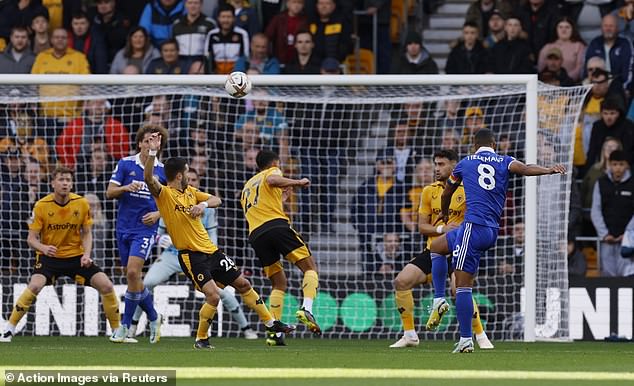 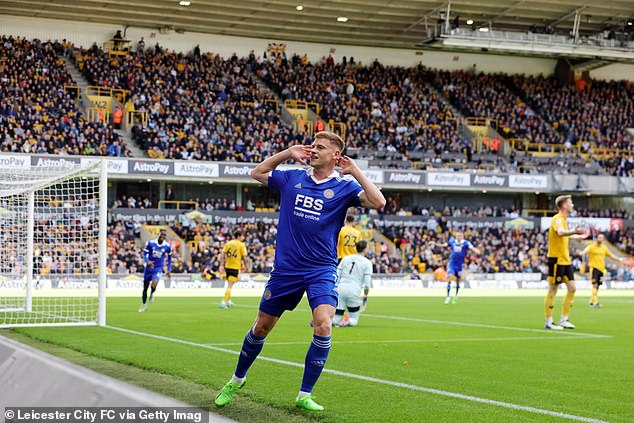 This wasn’t actually a bad performance by Wolves. They had the better of much of the game, but a team that has scored five goals in 12 games this season couldn’t convert any of their 21 attempts.

Leicester, on the other hand, taught them a lesson in finishing, scoring four goals with five attempts.

In the managerial minefield that is the Midlands, Brendan Rodgers now has some breathing space after a second win in four days saw his side move up to 16th in the table. Wolves, in contrast, are far from out of the woods.

In his programme notes, captain Ruben Neves welcomed the club’s decision to keep Davis in charge, although just how much choice they had in the matter is debatable after contact with Julen Lopetegui, Michael Beale and Nuno Espirito Santo had drawn a blank. 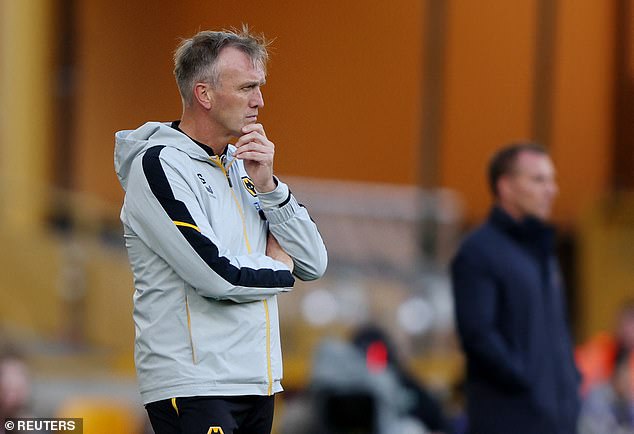 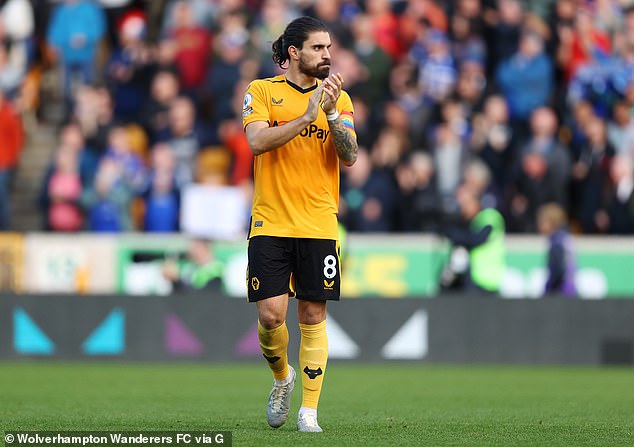 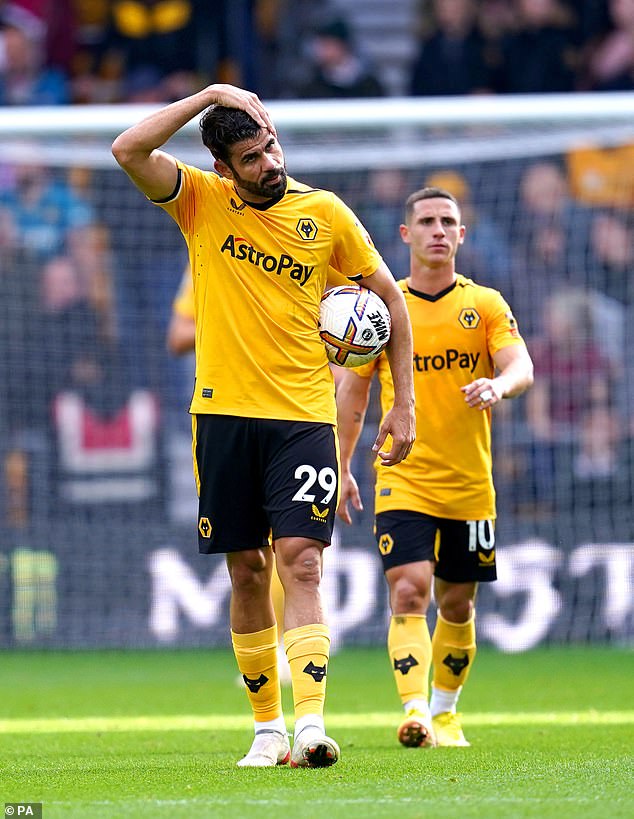 ‘When we learned the news that Steve will remain in charge until 2023, as players, we were fully behind the decision,’ wrote Neves. ‘We’re really happy he is staying on as head coach and I truly believe it was the best decision for the club.’

Whether the Wolves fans shared his thoughts after an opening 19 minutes that saw Leicester take a stranglehold on the game is another matter. What a 19 minutes it was too; a flying start that brought nine attempts from Wolves and no goals, and two attempts from Leicester and two goals.

Diego Costa flashed the home team’s effort just over the top in the fifth minute as they swarmed all over Rodgers’ side. Matheus Nunes stormed through only to see Danny Ward block his effort, Timothy Castagne blocked Hugo Bueno’s shot and Max Kilman headed over. 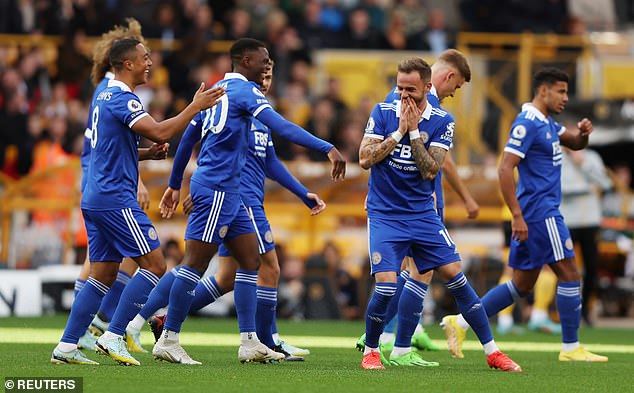 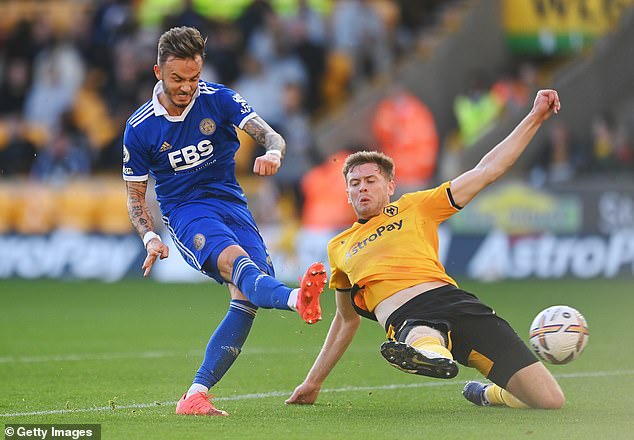 Leicester hadn’t even got out of their own half when Yiouri Tielemens fired them ahead with a spectacular strike in the eighth minute. James Maddison, returning after a one-match ban, swung over a free kick from the left which was headed clear to Tielemens on the edge of the area.

The Belgian let it bounce before sending a dipping shot towards the top corner and in off the post with his right foot. It wasn’t quite as sweet as his famous winning goal against Chelsea in the 2021 FA Cup final, but it was sensational goal all the same.

If that felt like a sucker punch for Wolves after such a bright start, they were caught with another in the 19th minute. 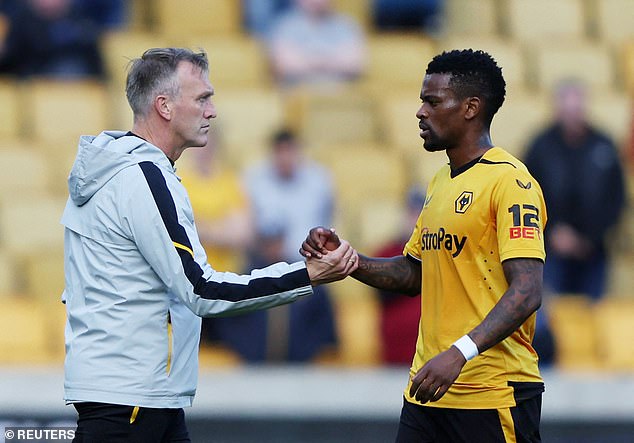 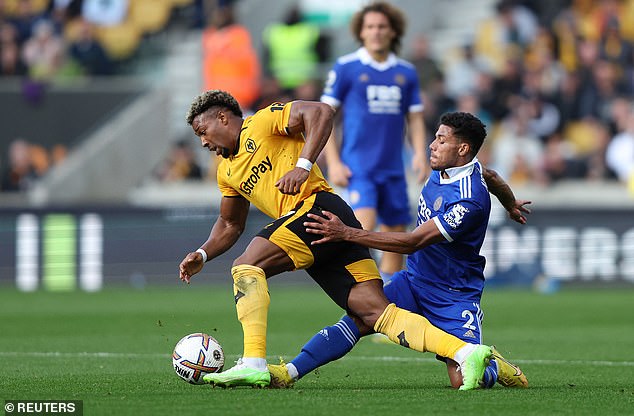 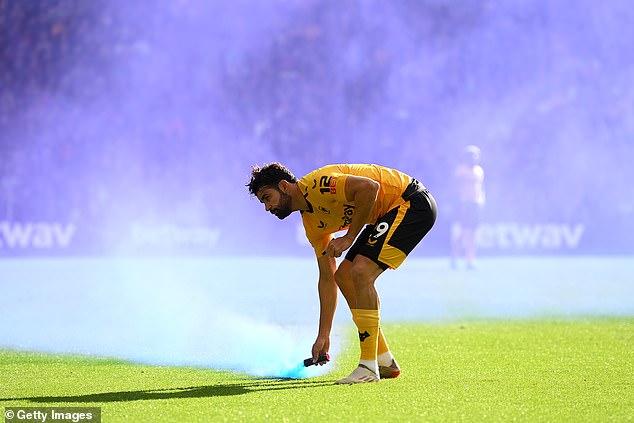 This time the goal was far too easy. Wout Faes carried the ball out of his own half and fed it to Maddison who swept a pass out to Harvey Barnes on the left.

Barnes ran at Jonny and who stumbled as the Leicester No.7 played a one-two with Kiernan Dewsbury-Hall and guided the ball past Jose Sa.

Leicester could easily have had a third when Patson Daka closed down Sa’s clearance kick, but Wolves could also have been level at half-time had their finishing been as clinical as Leicester’s.

First, a Joao Moutinho free kick was flicked on by Nunes and Costa’s effort at the far post was going in until James Justin got a vital block as he stumbled.

Then, Costa’s clever dummy gave Daniel Podence the time and space to beat Ward but the keeper produced another fine save. 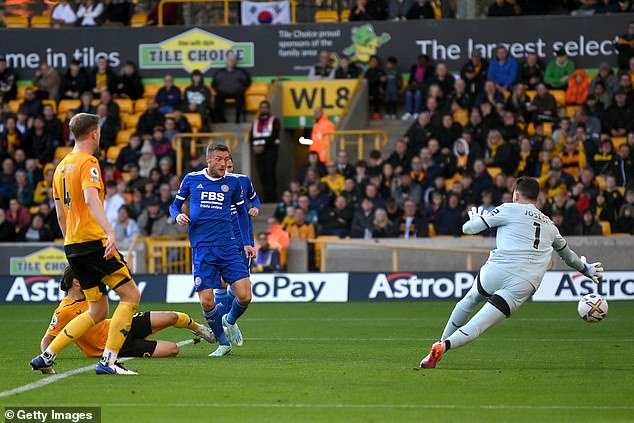 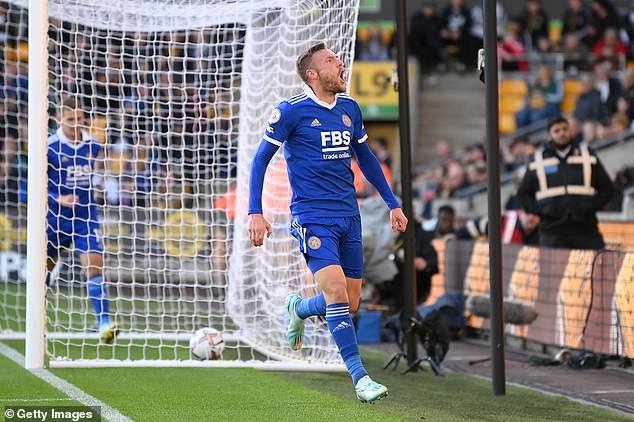 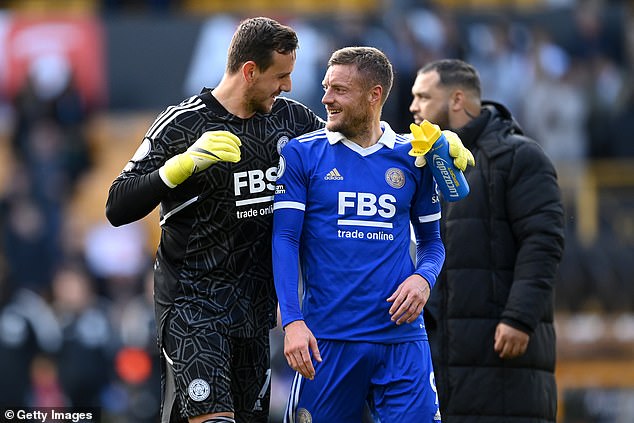 Rodgers was under-pressure to drop the Wales keeper not so long ago, and it was noticeable that the Leicester coaching staff and substitutes went over to congratulate him as the teams headed in at half-time.

Wolves started the second half much as they had the first, Neves going closest to a goal with a free kick that was inches wide of Ward’s left-hand post.

But there was already a whiff of mutiny in the air when Maddison put the result beyond doubt in the 65th minute. Rodgers had just made a triple substitution when one of his replacements, Jamie Vardy, played the ball to Maddison 30 yards from goal. 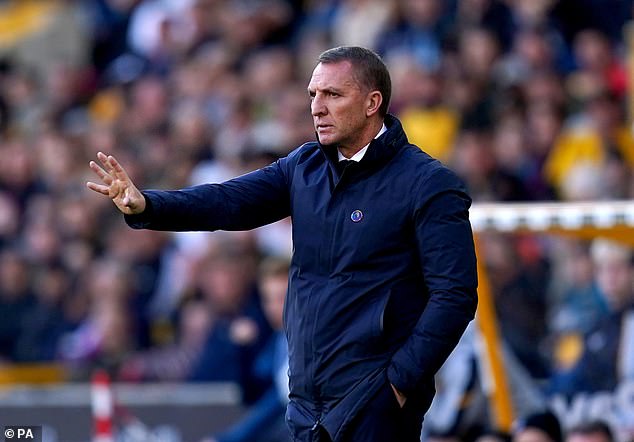 Vardy was looking for a return pass but Maddison bounced off a challenge from Adama Traore and accelerated away from Nathan Collins before lashing a shot past Sa.

Vardy got his goal in the 79th minute, however, after Leicester pounced on a poor pass out by Kilman. Castagne hunted down the ball and crossed to the edge of the six-yard box where Vardy had got clear of Neves to score.

Five shots, four goals. It is the kind of strike rate that Wolves can only dream of right now. But their problems run much deeper.