Woman, 19, has ball of hair weighing 3.3lbs surgically removed from her stomach

Woman, 19, has a hairball weighing 3.3lbs surgically removed from her stomach ‘after a rare psychiatric disorder caused her to eat her locks’

A woman has had a huge hairball weighing 3.3lbs (1.5kg) surgically removed from her stomach.

The 19-year-old, who has not been named, suffers from a rare psychiatric disorder which causes her to eat things items that aren’t food.

The consequences can be deadly, and doctors in India said the woman was suffering with ulcers and erosion in her stomach.

They revealed pictures which show the giant hairball alongside a ruler, measuring 8.6 by 3.4inches (22 by 8.6cm) in size and covered in mucus.

A 19-year-old woman has had a huge ball of hair weighing 3.3lbs (1.5kg) and measuring 22cm by 8cm in size surgically removed from her stomach 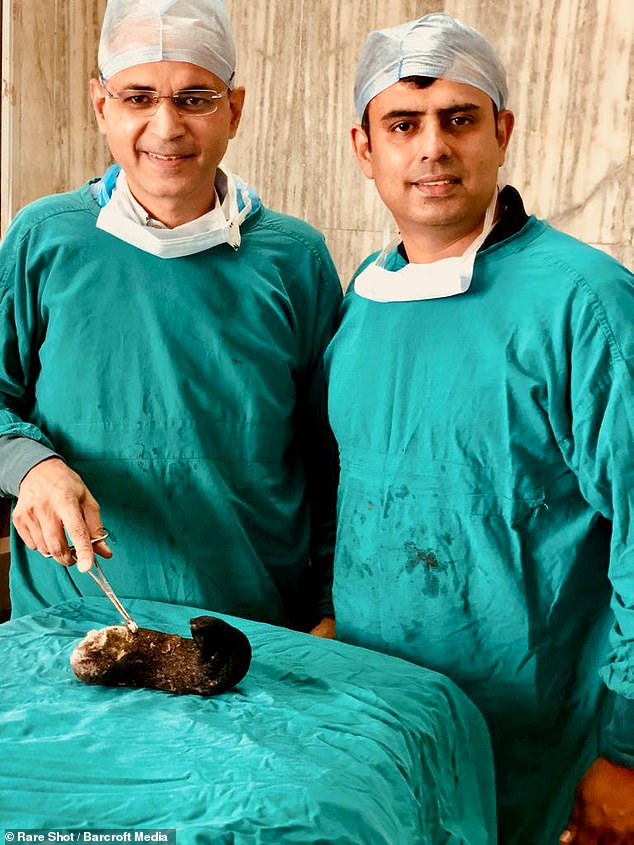 The surgery team at a hospital in Ludhiana, Punjab, removed the giant hair mass

The teenager was brought to hospital in Ludhiana, Punjab, by her parents. It is not clear if she had any symptoms.

Dr Varun Saggar led the team of doctors who pulled out the compacted hair – called a trichobeozar – from the woman’s stomach.

Dr Milan Verma, one of the surgeons, said that operating on the woman was challenging because she was so underweight and suffering from nutritional deficiencies.

Her diet included mud, sand, chalk as well as hair, according to local reports. It is believed she had pica, an eating disorder whereby the person cannot help eating non-food items.

The bizarre habit of eating hair is specifically called trichophagia, or ‘Rapunzel syndrome’. 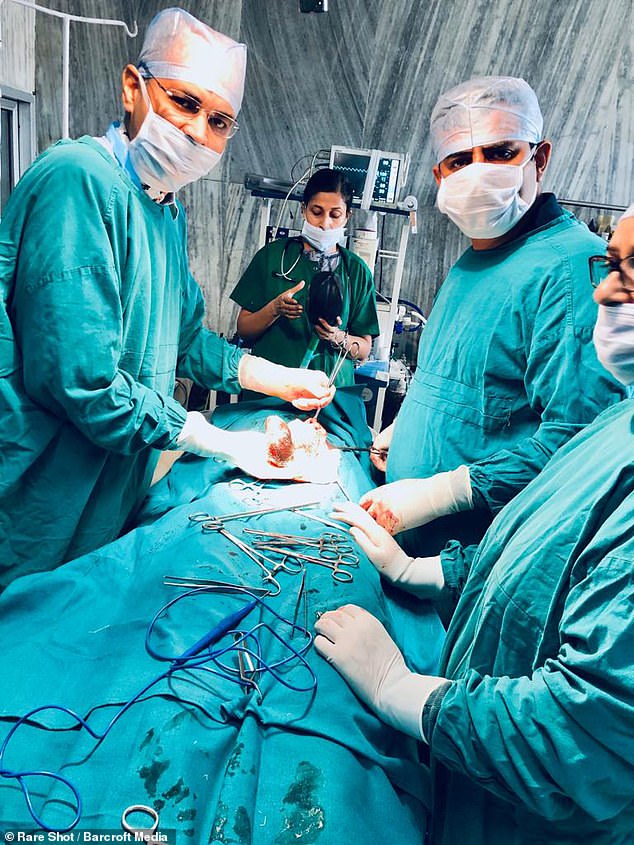 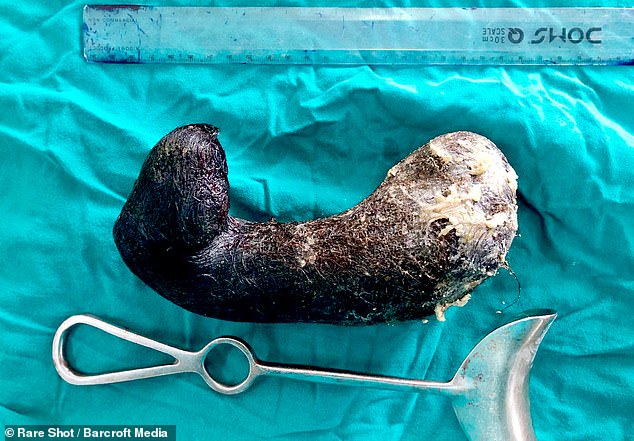 The woman suffered from trichophagia, often called Rapunzel syndrome. Her diet included mud, sand, chalk as well as hair, according to local reports.

WHAT IS RAPUNZEL SYNDROME?

Rapunzel syndrome is a rare condition where hairballs are found in the digestive tract after a person ingests their own hair.

This can be caused by trichophagia where a person compulsively eats their own hair.

It is associated with trichotillomania, when someone can’t resist pulling the hair out from anywhere on their body.

It is predominantly found in young people who have learning disabilities or mental health problems including depression, anxiety and schizophrenia.

Only 88 cases have been reported in medical literature, according to a 2016 discussion in BMJ Case Reports.

They said it almost always affects women, with only three per cent of cases being over the age of 30.

It causes a person to compulsively eat their own hair and is sometimes referred to as a symptom of trichotillomania, when someone can’t resist pulling the hair out from anywhere on their body.

Trichophagia, which can appear as innocent hair sucking in a child, is dangerous because the stomach cannot digest hair.

It leads to hairballs forming in the gastrointestinal tract over time – usually years – with the tail extending into the small intestines.

Complications can lead to inflammation or rupture of the bowel, weight loss, pancreatitis and appendicitis.

In some cases, it has even led to death – a British teenager died after a hairball that was lodged in her stomach became infected.

Jasmine Beever, 16, from Skegness, developed peritonitis, which is an inflammation of a thin layer of tissue in the abdomen, before her death in 2017.

She had been chewing on her own hair for many years before collapsing, it was revealed.

Dr Varun Saggar said that trichobezoar – from the word bezoar, which is a mass found trapped in the stomach, is very rare.

Around 90 per cent of cases occur in young females, while the tendency to eat hair is linked to people with learning disabilities or mental health problems.

The teenager is now recovering from her surgery, although it is not clear whether she will have psychiatric support.