Woman, 23, has been left wheelchair bound after doctors dismissed her stroke symptoms as anxiety

A woman says she has been left reliant on a wheelchair after doctors dismissed her stroke symptoms as anxiety.

Drewy NovaClara Curious felt numb and started slurring her words while driving with her husband Avery in June last year.

The now 23-year-old went to hospital, where doctors spent hours trying to uncover what was wrong.

They eventually sent her home, saying she was too young to have a stroke and was probably just anxious.

Refusing to accept this diagnosis, Mrs Curious, of Toronto, went to another hospital, where she was diagnosed with ischaemic stroke.

The ‘wasted’ hours at the first hospital meant she had not been treated quickly enough, leaving Mrs Curious unable to walk or talk.

Although she has relearnt how to communicate, she claims she is still dependent on a wheelchair to move around. 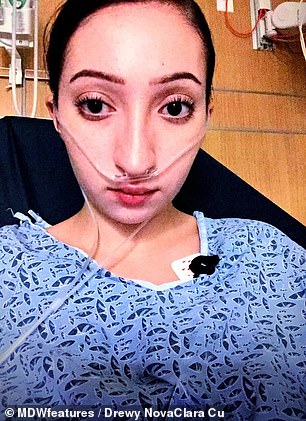 Drewy NovaClara Curious has been left wheelchair bound (left) after doctors dismissed her stroke symptoms as anxiety. The 23-year-old started slurring in June last year. Once in hospital (right), doctors said she was too young to have a stroke. By the time she was diagnosed, the ‘treatment window’ had passed. The damage left Mrs Curious unable to walk 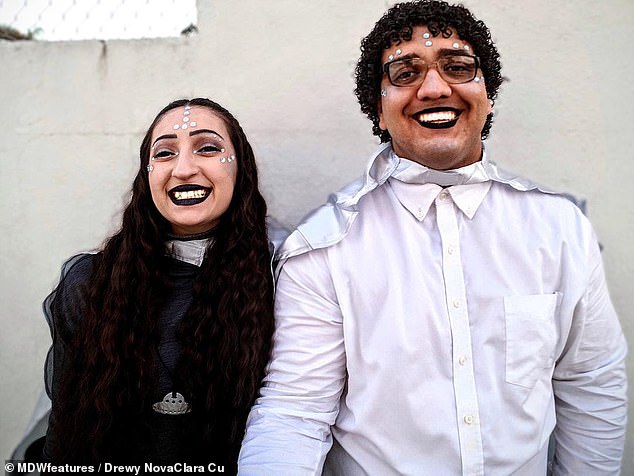 Mrs Curious was on the way home from a day at a museum with her husband when her symptoms appeared.

On their way to the hospital, Mrs Curious managed to stay calm. ‘I already knew I was having a stroke, so I didn’t need to be informed of it,’ she said.

However, the medics she saw were less confident of the diagnosis and kept her waiting for hours.

‘The first doctors I saw diagnosed it as anxiety and did no treatment whatsoever,’ Mrs Curious said.

‘They said I was too young to have a stroke and discharged me. They wasted hours of my time and had caused me to miss the time window for treatment.’

Once discharged, Mrs Curious immediately went to another hospital, where she was diagnosed.

Doctors administered treatments that dissolved the blood clot that was blocking oxygen to her brain. She was also given blood pressure and cholesterol-lowering drugs.

‘When I realised the stroke was over and I had survived, the first emotion was relief,’ she said. ‘Then confusion, why did it happen?’

The cause of Mrs Curious’ ischaemic stroke is unclear. However, the health scare has been linked to smoking, high blood pressure, diabetes and excessive alcohol intake. 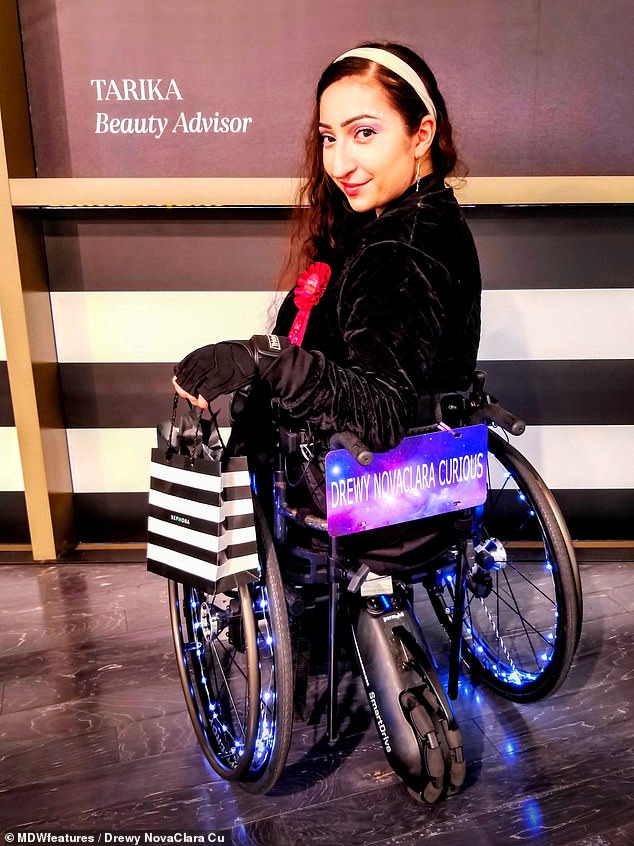 After enduring pitying stares from strangers, Mrs Curious decided to give passers by ‘something to look at’. She decorates her wheelchair ‘Opal’ with ‘cool’ lights (pictured) 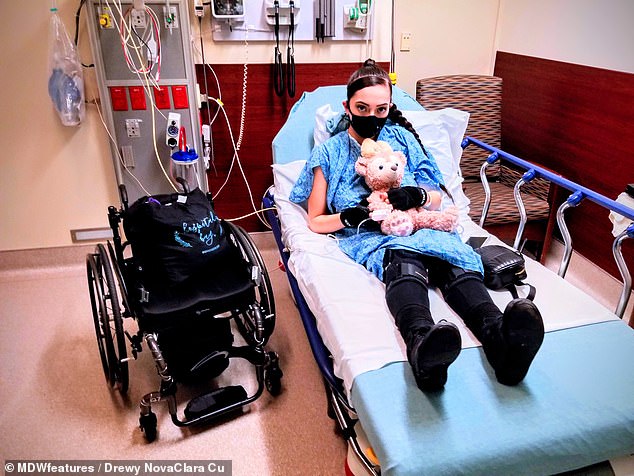 Mrs Curious is pictured in the first hospital she went to. After hours of waiting, she was sent home with a diagnosis of ‘anxiety’. Refusing to accept this, she then went to a second hospital

Mrs Curious initially relied on her husband to do almost everything for her, but is slowly regaining her independence.

‘The toughest part was just learning how to do everything again,’ she said. ‘The only family I have is my husband.

‘I’ve always been a very independent person. He now knows if I need help, I’ll ask for it. But otherwise, I can do things myself.’

Mrs Curious also battled with pitying stares from strangers. ‘I get stared at a lot,’ she said. ‘So, I give them something a little more fun to stare at.’

‘When people see my light up wheelchair, they always say, “That’s so cool”,’ she said. ‘I have a galaxy print license plate on the back of my chair with my name on it.

‘I decorate all of my mobility aids and wear crazy, fun make-up and bold outfits.’

Mrs Curious is speaking out to raise awareness strokes can occur at any age and the ordeal does not have to ruin your life.

‘I dance wild and free whenever I have the opportunity, and I love spinning wheelies,’ she said. ‘I don’t do boring. Fabulous is way more fun.

‘You don’t need to give up fun, hanging out with friends, learning, you don’t have to give up on anything.

‘You just have to learn how to do some things differently and sometimes that can be quite fun. I like to say, “Never forget fun”.’ 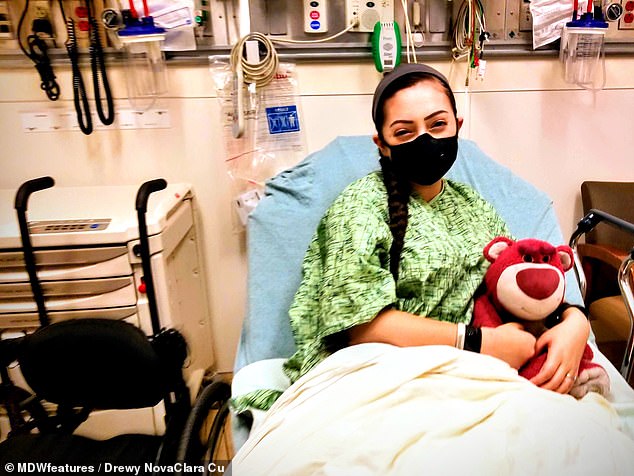 Once diagnosed, Mrs Curious was treated with drugs to dissolve the blood clot blocking oxygen to her brain. She was also given blood pressure and cholesterol-lowering medication 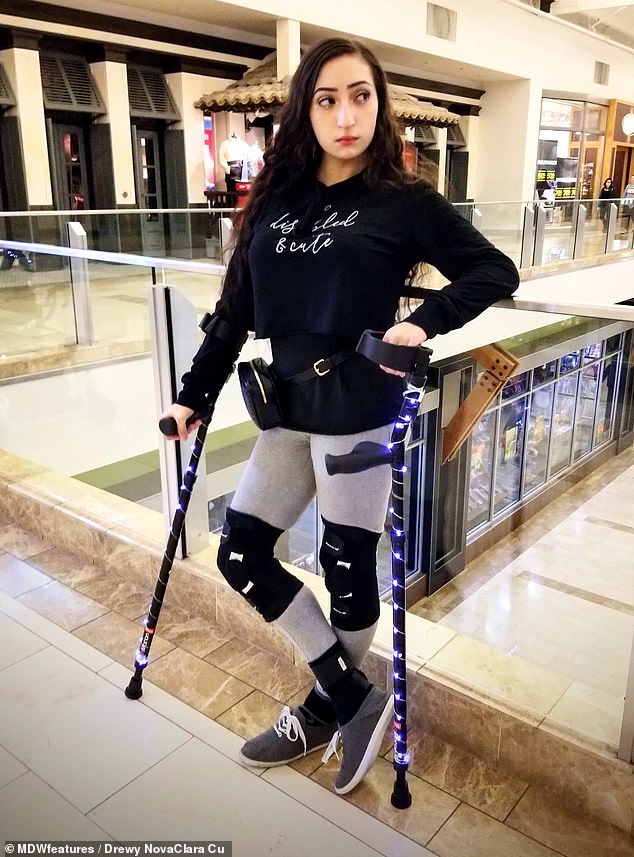 Mrs Curious sometimes gets about with crutches, which she also decorates with lights 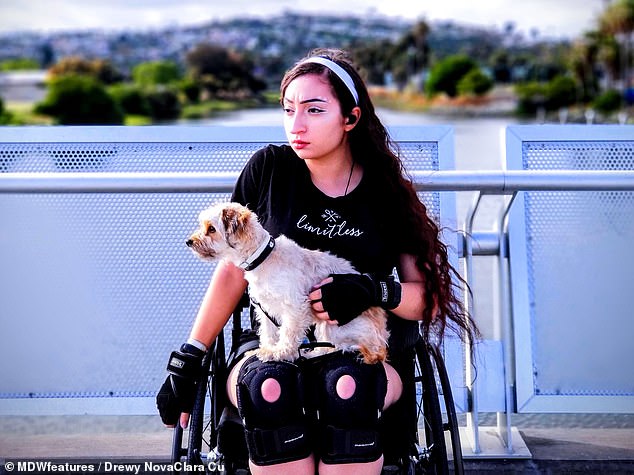