Woman, 23, reveals her mother’s boyfriend violated her as she SLEPT

A woman has revealed how she made the sickening discovery that her mother’s boyfriend was repeatedly sneaking into her room to sexually assaulted her while she slept.

Megan Lavigne, 23, from Warrington, told FEMAIL how her mother’s boyfriend  Michael Brady sexually assaulted her and recorded it on his phone – and may have abused her up to ten to 11 times.

Police found screenshots and video recordings of Brady assaulting Megan, then 21, several times on his phone in 2017, four years after he’d moved in with the teenager and her mother.

Neither Megan nor her mother had any idea that the abuse had been going on, until she had to watch some of the footage of her own assault to confirm she was indeed the victim.

Brady pleaded guilty to sexual assault, voyeurism, and causing a computer to perform a function to secure unauthorised access to secure data. He was sentenced to four years in prison in August 2018.

Now Megan, who suffered from depression following the revelations, has waived her right to anonymity to encourage other victims of abuse to speak up.

Megan Lavigne, 23, from Warrington, has told how her mother’s boyfriend repeatedly sexually assaulted her and recorded it while she slept 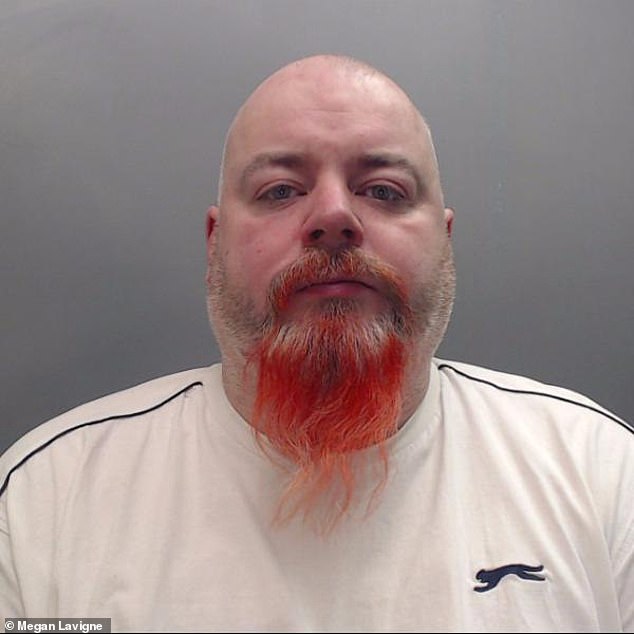 Michael Brady, 43 (pictured) was sentenced to four years in jail and subject to a restraining order preventing him from contacting Megan

‘I’m not the carefree girl I once was, but I’m determined not to let that pervert break me and I want to move on,’ she said.

‘He’s a depraved human being and exactly where he belongs – behind bars.’

As a teenager, Meghan used to feel guilty about going out and leaving her mother alone at home, and so she was happy when her mum had met Brady, who called himself ‘Bear.’ 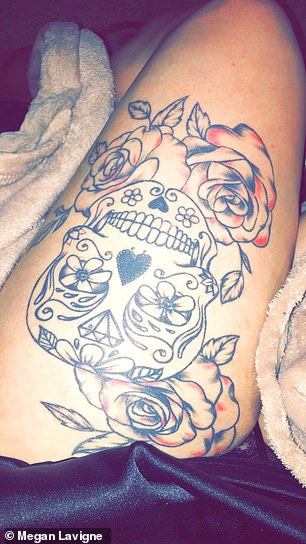 The distinctive leg tattoo on Megan’s left thigh. Megan said she had to identify herself on videos of her own sexual abuse

But in 2017, Brady moved in with the two women, and Megan’s initial contentment turned to dismay.

‘Mum had a spring in her step, she seemed really happy. But as a local DJ Michael worked all night, then slept most of the day,’ explained Megan, who works in customer services.

‘When he was awake he’d strut around like he owned the place and he never made any effort with me.

‘I got the distinct feeling he even resented me being there. He was always on my case, barking at me, saying: “Get out of my chair!”

She added: ‘Behind Mum’s back he’d come out with inappropriate comments too, saying things like: “You’ve got big boobs.”

‘I’d think “perv” and brush it off. But he made my skin crawl.

‘I didn’t tell Mum though, I knew she’d be devastated and I didn’t want to hurt her.’

Meanwhile, Megan, then 21, told how she half wondered if he actually did have a more considerate side to him.

‘Like when I’d fall asleep on the sofa with a blanket, having nodded off watching telly,’ she said. ‘One night I woke up just as Michael was leaning over me. 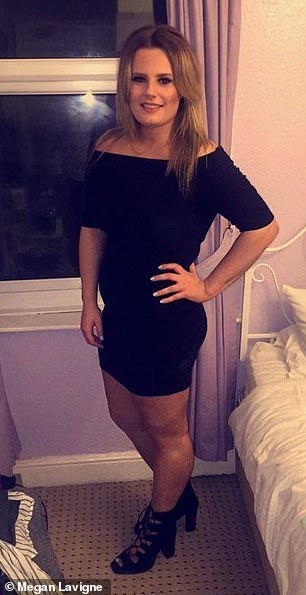 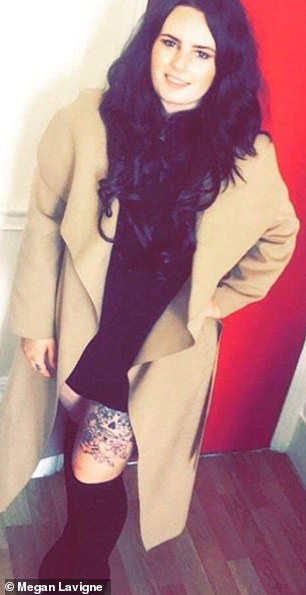 Megan told how she had caught Michael looking at her body and hovering around her while she slept, but thought nothing of it at first

But he told me he was just tucking me in.’

However, on another occasion in 2017, her best-friend Jamie, now 29, dropped a bombshell.

‘Jamie often stayed over in my room and Mum didn’t mind,’ she explained. ‘Our relationship was totally platonic. Before I knew it I was dead to the world. I’d always been a heavy sleeper.

‘The following morning when we woke up Jamie said: “That was odd wasn’t it?”

‘I asked him what, then my mouth fell open as he went on to tell me how he’d caught Michael sneaking into my room at 4am.

‘He’d threatened to throw Jamie out, then apologised to him and told him to go back to sleep.

‘Neither of us could fathom why he was coming into my room in the first place. But we put it behind us.’ 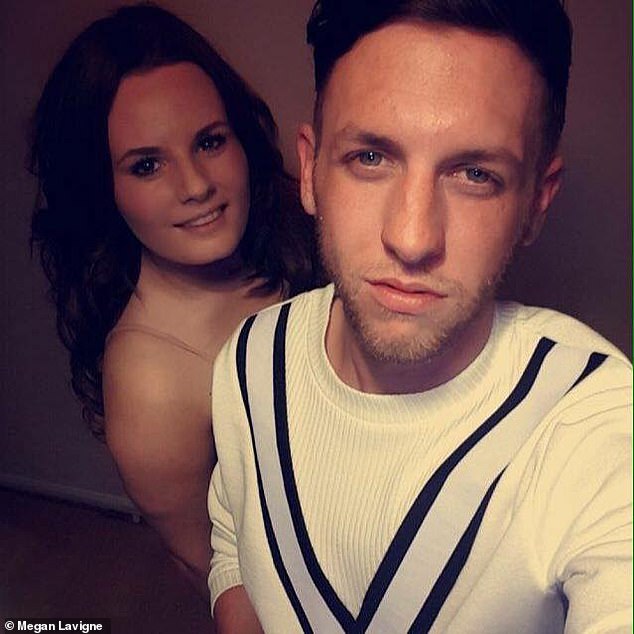 Megan with her best-friend Jamie, 23, who helped her through the ordeal. Jamie once caught Brady sneaking into Megan’s room at 4am

However, things took a darker turn when Megan woke up one day and realised that someone had touched her phone.

Upon unlocking the device, she realised that nude pictures she had taken of herself years prior had been sent from her phone to an unknown address which read ‘bear pit.’

‘Bile rose in my throat,’ she said. ‘I knew only one person who called himself Bear and he was living under the same roof.’

A Facebook search confirmed the email belonged to Brady.

Brady was questioned by police but was released without charge.

Megan, who felt ‘scared and depressed,’ moved out of her mother’s house, but could not put the incident behind her, feeling there was more to it than she knew.

‘I couldn’t believe it,’ she recalled. ‘As the days passed it all seemed to blow over and I thought he’d got away with it.’

Then in May 2017 the police got back in touch with Megan, asking her to come to the station.

She sat down with a female officer who informed her that the team had retrieved some data from Brady’s phone, including videos which showed him assaulting Megan while she slept.

‘My hand flew to my mouth as a wave of shock smashed into me,’ she said. ‘For a few seconds I couldn’t speak, I just felt sick.’ 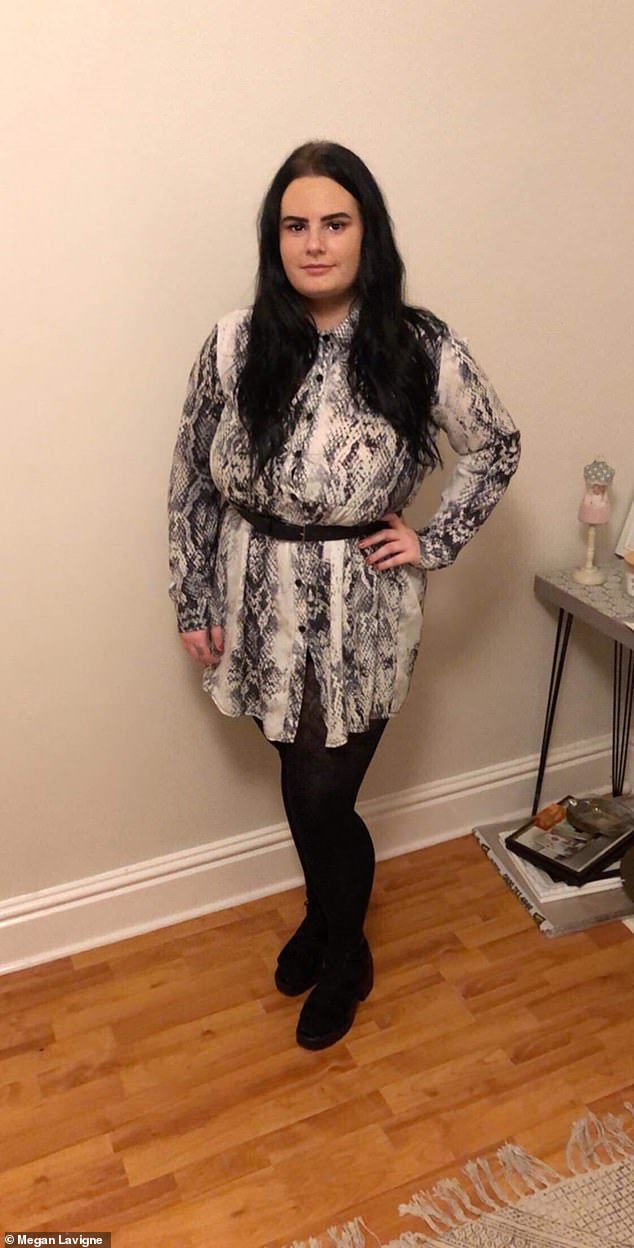 Megan told how she wanted to move on with her life following Brady’s conviction. She said she is now speaking out to encourage other victims of abuse to come forward 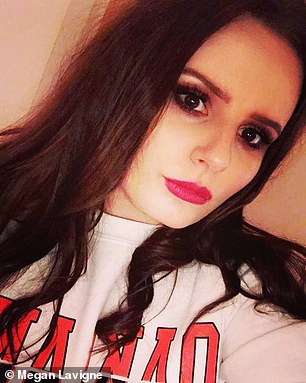 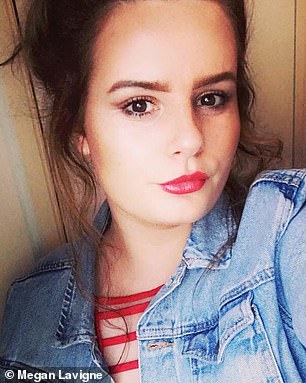 The young woman said her life ‘fell apart’ following the realisation that Brady had been sexually abusing her while she slept. Despite being spared the ordeal of a trial when Brady pleaded guilty, Megan struggled with depression

The young woman was then asked to watch screenshots of the footage to confirm whether she was indeed the victim of the crime.

She did so a few weeks after her meeting, having taken the time to process the news.

‘Staring at the screenshots there was no doubt it was me,’ she explained. ‘The mirrors on my wardrobe, my recognisable bed covers being pulled back. Also the distinctive skull and roses tattoo on my left thigh.

Megan explained the police also had found pictures of Brady touching her intimately, which had been blurred.

‘But it was all too apparent that Michael had sexually assaulted me and had taken videos as he’d done so,’ she explained.

‘I broke down, crying, thinking: How could anyone be so sick?’

Brady appeared in court shortly after and admitted to sexual assault, voyeurism and causing a computer to perform a function to secure unauthorised access to secure data.

Court heard that it was possible he had abused Megan up to ten to 11 times before she found out about the pictures.

Because Brady pleaded guilty, Megan did not have to go through a trial, however, she said her life fell apart.

‘Spiralling into depression I became a shadow of my former self, suffering panic attacks, night terrors and insomnia,’ she explained.

Megan said she now volunteered in the rape and sexual abuse support centre, RASASC in order to help other victims

‘When the time came for me to read my statement nerves nearly got the better of me,’ said Megan. ‘But the judge looked at me and said: ‘Are you going to do this Megan?,’ and suddenly a wave of determination swept over me.

‘As I stood up I addressed the court as I said: “I don’t understand why he’s done this to me, it doesn’t make any sense.

‘I said too, how what had happened had left me “feeling lost and broken” and how I thought the person I once was would never come back.’

Brady was sentenced to four years in jail and was made the subject to a restraining order preventing him from contacting Megan.

Megan now volunteers at the rape and sexual abuse support centre, RASASC, in a bid to help other survivors of abuse.

‘I’m still dealing with the after effects. I throw myself into work to keep my mind focused, but at night I’m often too terrified to sleep,’ she said.

‘I’m not the carefree girl I once was, but I’m determined not to let him break me and I want to move on.

‘He’s a vile human being and exactly where he belongs – behind bars. At least while he’s there he can’t do it to anyone else.’

Megan told how she hoped telling her story would encourage anyone who’d have experienced a similar ordeal to speak up and tell the police.

‘Don’t let abusers like Brady get away with it,’ she said. 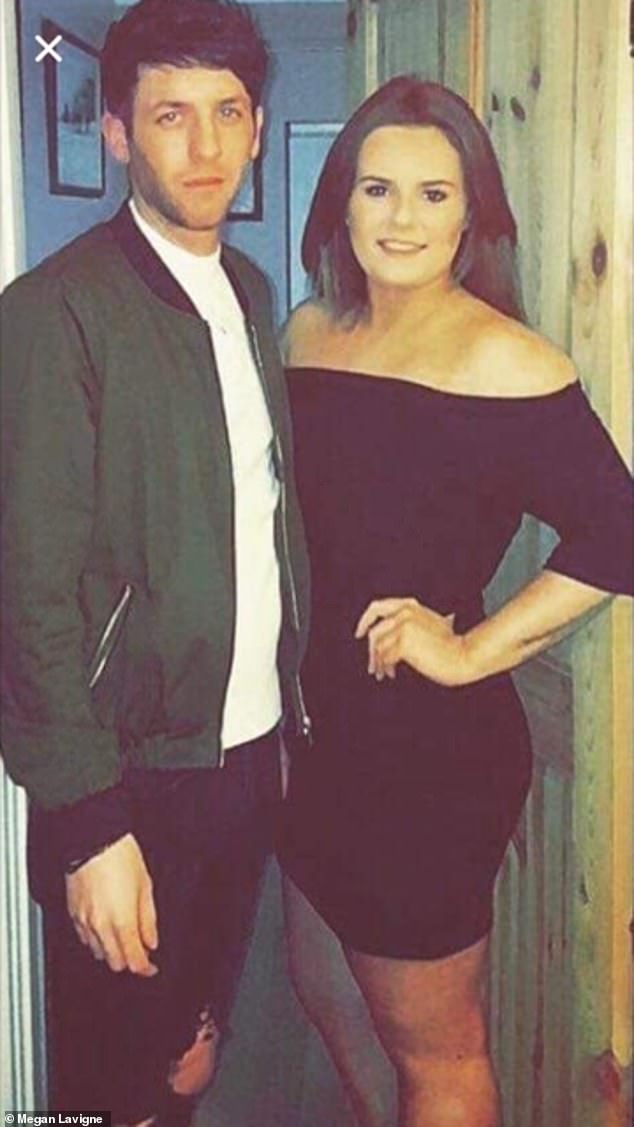 Megan told how she now suffered panic attack and was the ‘shadow of [her] former self.’ Pictured with Jamie