A woman has had a giant tumour removed from her face after being stoned by people who thought she was possessed.

Pascaline Patienda, 23, said she was taunted by locals in her village, Digre, Burkina Faso, Africa, for the mass on her face.

The rare non-cancerous tumour, called an ameloblastoma, began growing when she was 15 years old, eventually injuring her jaw and teeth.

Charity workers spotted Ms Patienda in the street and offered to help her because she was unable to afford any treatment.

They spoke to surgeons at Vithas Valencia 9 Octubre hospital in Spain, who agreed to do the €40,000 (£34,000) operation for free in September. 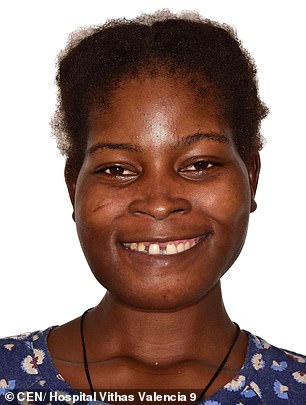 Pascaline Patienda, 23, has had a giant tumour removed from her face after being stoned by people in her village who thought she was possessed. Pictured before and after 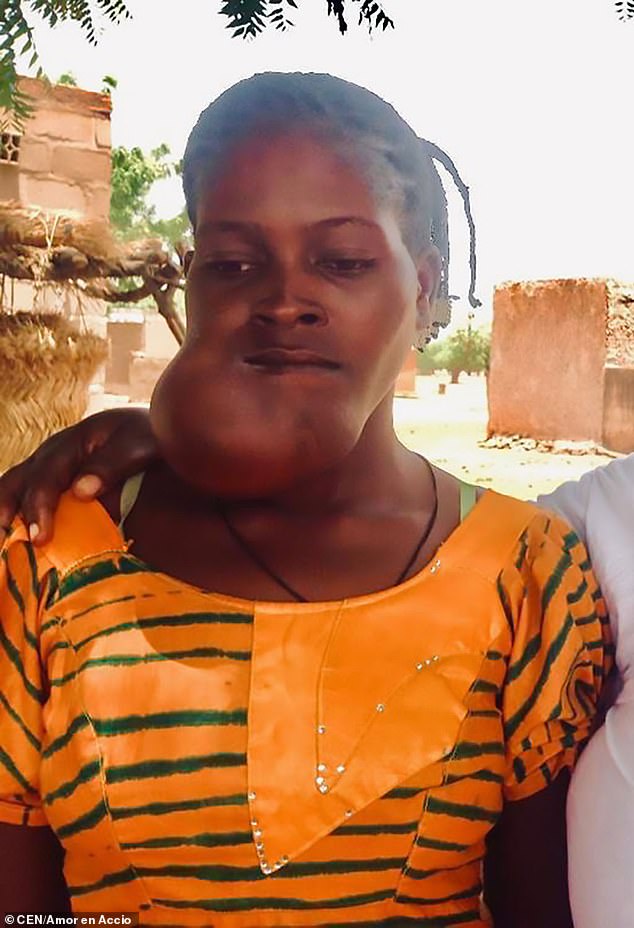 Ms Patienda was cruelly taunted by locals in a small community in Digre, Burkina Faso, Africa

Dr Ignacio Solis, who worked on Ms Patienda, told Central European News (CEN): ‘I was contacted by a doctor from the organisation Amor en Accio (Love in Action) and told me the story of Pascaline.

‘She was left separated from the community and was even stoned. It was believed she was possessed by something evil, so it was not just a physical issue.

‘Her teeth were included in the tumour and moved, and the woman was unable to eat properly.’

Amor en Accio have two nurses working in Burkina Faso all year. One day, while walking the streets, they found Ms Patienda and were ‘interested’ in her abnormality.

The young woman was only able to talk in a local dialect and didn’t understand their French.

But she was able to tell them how long the tumour had been there for and the fact she had never been to a doctor.

The nurses said they would help her and she flew to Valencia, Spain, where she underwent the surgery. 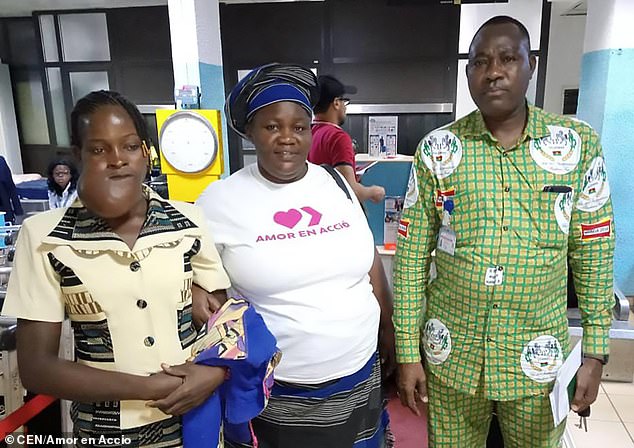 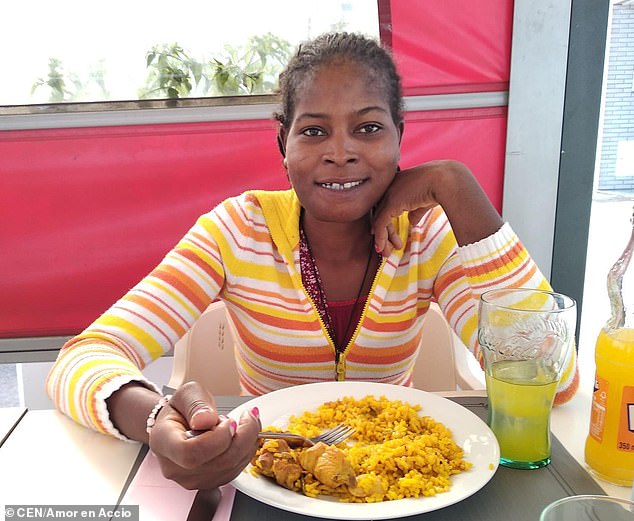 The surgery was done in September and after two months, Ms Patienda is able to move her mouth again totally naturally. She is pictured eating with her new jaw and teeth 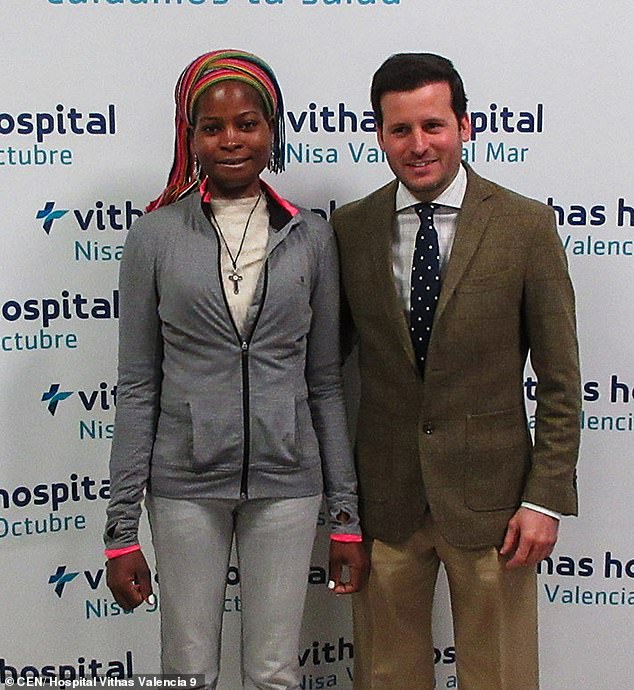 Dr Solis and colleagues were able to reconstruct Ms Patienda’s face with a piece of the fibula – in the lower leg.

Once the bone material was taken from her arm, it was built into the arm and attached to artery and veins to connect the blood supply.

Later it was fixed with a sheet of skin and teeth implants were added.

The surgery, financed by the Foundation Vithas, the hospital and the NGO Amor en Accio was very complex.

Ms Patienda has been discharged from hospital and will return to Burkina Faso on 5th December where doctors based there will monitor her recovery.

Dr Solis said: ‘She is very happy, she cannot communicate as she only speaks her local language, as she lives in a very poor village, with her family, but she was able to communicate through signs.’

An ameloblastoma is a slow-growing benign tumour which starts in the jaw, normally around the wisdom tooth. It can affect speaking and eating.

Ameloblastoma is a rare, usually benign, tumour that affects the jaw. The tissues involved are typically those which teeth grow from, therefore facial distortion is common.

Only one per cent of mouth tumours are ameloblastomas. Separate figures show mouth cancer affects 6,800 people a year in the UK and up to 51,540 in the US.

In extreme cases, the growth can also affect the nose, sinuses and eye sockets. In less than two per cent of incidences, ameloblastomas can become cancerous and spread, particularly to the lungs.

As well as an abnormal growth in the jaw, other symptoms may include:

Ameloblastomas’ cause is unclear but may involve a combination of genetics and:

The lower jaw is affected in 80 per cent of cases.

The tumour reappears in up to 72 per cent of cases if all of the affected tissue is not removed.

If the tumour has spread, radiotherapy is often required, with chemo being less effective.