Woman, 23, who mistook her vitiligo for TAN LINES as a child gets a tattoo explaining her condition

A woman had ‘It’s called Vitiligo’ tattooed across her knee to hit back at cruel strangers who stare at her skin.

Dionne Lees, 23, was diagnosed with the condition at 12 after initially thinking her white marks were just bad tan lines.

Miss Lees, of Livingstone, Scotland, endured years of people treating her like a ‘monster’, with some even asking if she had been burnt in a fire or was contagious.

After qualifying for the Commonwealth Games, Miss Lees gave up a promising career as an international gymnast when she became too embarrassed to wear a leotard.

Miss Lees, who works in a bank, eventually learnt to accept her looks after being inspired by the supermodel Winnie Harlow, who also has vitiligo.

Rather than having to explain her condition every time, Miss Lee now just points to the tattoo on her right knee, which is also where her vitiligo is most prominent.

Dionne Lees had ‘It’s called Vitiligo’ tattooed across her knee to hit back at cruel strangers who stare at her skin. The 23-year-old endured years of people treating her like a ‘monster’ 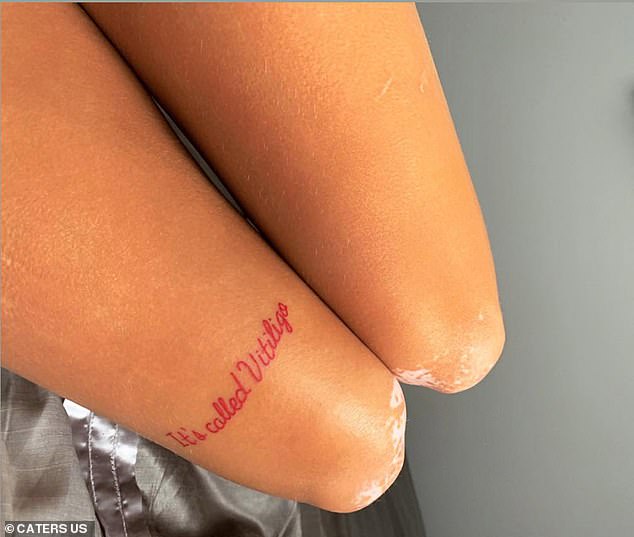 Rather than having to explain her condition every time, Miss Lee now just points to the red tattoo on her right knee (pictured), which is also where her vitiligo is most prominent

Speaking of the permanent marking, Miss Lees said: ‘I was thinking about getting this tattoo for quite a long time now, so I’m super happy I’ve finally got it.

‘It’s kind of a symbol of full acceptance. I still get quite a few stares and instead of having to explain what these white patches are I just decided to get ‘It’s called Vitiligo’.

‘Vitiligo will be with me forever and so will this tattoo so it does mean so much to me.’

She chose her knee because it will be visible with lots of outfits and when she is wearing a bikini.

‘I wanted it somewhere a bit different and also where you can see my vitiligo,’ Miss Lees said.

‘So my largest area of where my vitiligo is, is on my legs and when I’m sitting down or even standing the tattoo is positioned well so that you can see it.

‘It’s also in a great place that I can point to the tattoo when people stare or ask me what is wrong with me.’ 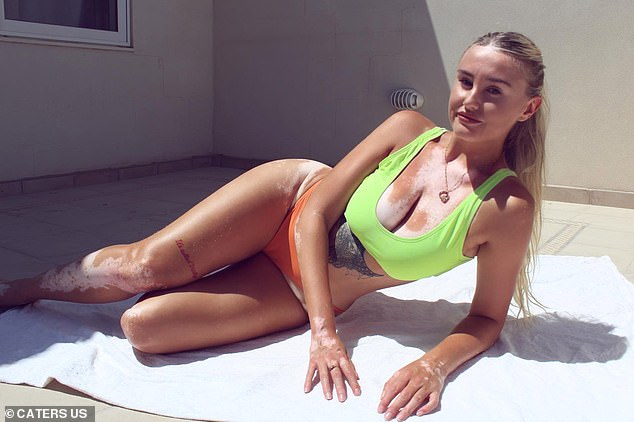 Miss Lees also chose to have the tattoo on her knee due to it being visible in many outfits and when she wears a bikini. She likes to ‘promote body positivity by posing in bikinis’ online 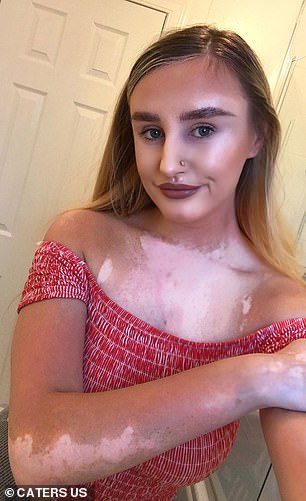 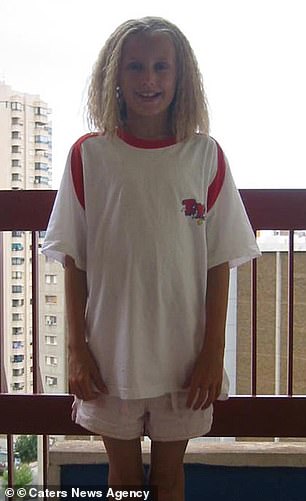 After using steroid creams and heavy make-up to cover up her skin for years, Miss Lees (left) now says she ‘definitely’ would not cure her vitiligo if she could. She is pictured left at 12 years old, which is the same age she was diagnosed after developing the patches on holiday 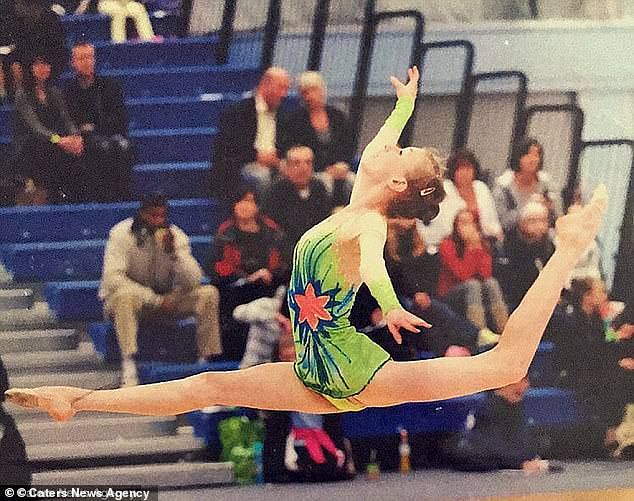 Miss Lees, who qualified for the Commonwealth Games, gave up a promising career as an international gymnast when she became too embarrassed to wear a leotard 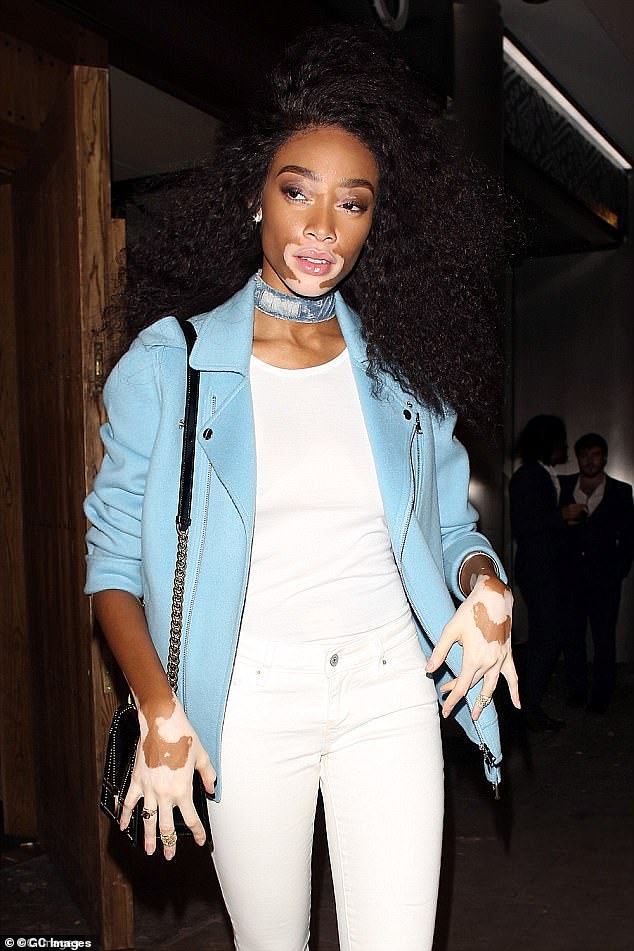 Miss Lees, who works in a bank, eventually learnt to accept her looks after being inspired by the supermodel Winnie Harlow (pictured), who also has vitiligo

Miss Lees first noticed her white patches as a child while on holiday in Spain with her parents.

‘I woke up with white patches on my eyes’, she said.

‘They were two big circles of white and the rest of me was really tanned.

‘I had been wearing sunglasses while lying in the sun so I thought must have been caused by that.’

As the week went on, Miss Lees developed similar blemishes on her back and around her belly button.

This left her mother in tears, who worried Miss Lees may have skin cancer.

Once home, the blemishes covered Miss Lees’ legs, which prompted her to see her GP. She was later diagnosed. 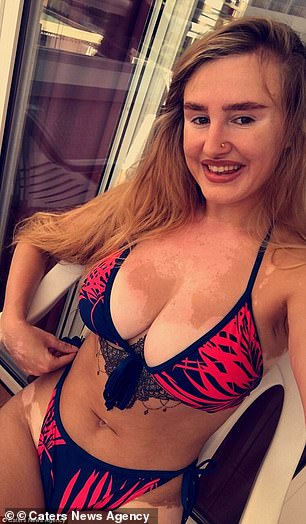 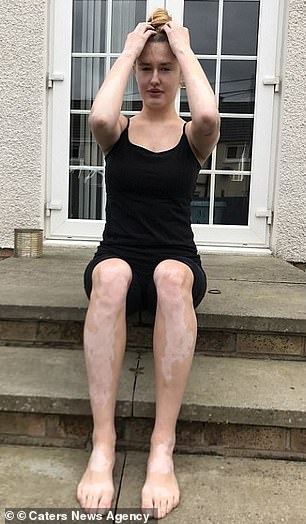 Miss Lees (left) describes her tattoo as a ‘symbol of full acceptance’. Her vitiligo first developed as white marks around her eyes, before appearing on her back and belly button. Her mother became concerned it may be skin cancer when it spread to her legs (seen right) 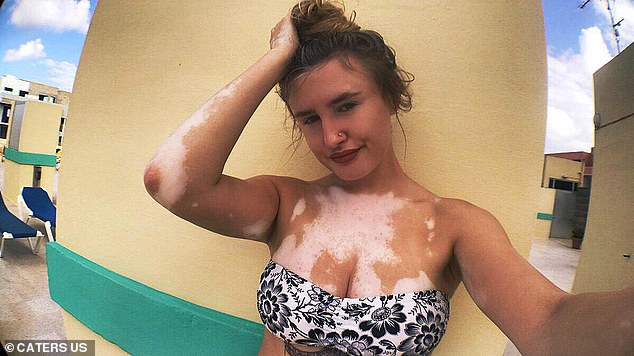 Vitiligo is a disease in which the pigment cells of the skin are destroyed in certain areas of the body.

Although the exact cause is unknown, experts say it is an autoimmune condition in which the body’s defense system mistakenly attacks and destroys certain cells within the body.

It’s not painful and doesn’t have significant health consequences, but it can have emotional and psychological effects.

Treatment ranges from medicines and creams to skin grafts.

Common areas for white patches are the armpits and groin, around the mouth, eyes, nostrils, navel, genitals and rectal area.

Symptoms include loss of skin colour, with white patches.

Most develop the condition before 40. About half develop it before 20.

It may have a genetic component, as the condition tends to run in families.

For years Miss Lees used steroid creams to reduce her blemishes, which she also covered with heavy make-up.

‘People used to mock me, asking if I had worn sunglasses for many years or whether I was wearing fake-tan,’ she said.

‘I have had people scared of me due to fear of the unknown, parents pulled their kids away like I was a monster and then others asked if I was burned in a fire.

‘Being young and very insecure I would never wear anything revealing.’

It was not until until Miss Lees saw photos of Winnie Harlow that her perspective changed.

‘I have stopped all treatment from the hospital, don’t wear make-up to cover up, and online I promote body positivity by posing in bikinis and shorts.

‘Any opportunity I get to show off my skin I do it, whenever I can I will always be in the sun because it brings out my vitiligo even more.

‘I always say even if there was a cure I definitely wouldn’t want treatment.’

Miss Lees has also not ruled out getting more tattoos so long as they do not cover her beloved blemishes.

‘I’m sure I’ll get more tattoos in the future which can help me explain my condition, but I don’t want to cover any of my patches up in the process!’ she said. 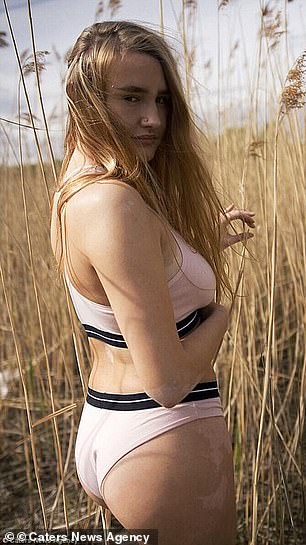 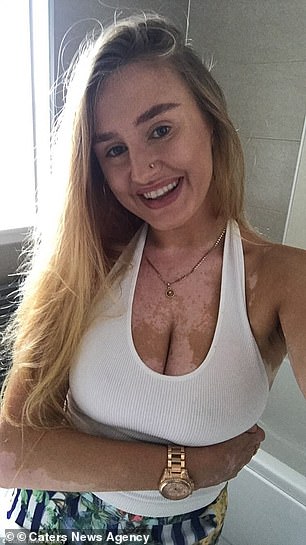 After being too insecure to wear anything revealing as a teenager, Miss Lees is now poses scantily clad (seen left) to inspire others with vitiligo. She has also not ruled out getting more tattoos so long as they do not cover her beloved blemishes, which took her so long to accept