The Los Angeles Police Department are launching an investigation into bombshell claims that Armie Hammer violently raped a young woman in 2017.

On Thursday, the woman – known only as ‘Effie’ – went public with her harrowing accusation saying Hammer raped her during a terrifying four-hour ordeal on April 24, 2017.

Speaking a press conference with her attorney, Gloria Allred, Effie claimed that Hammer ‘repeatedly slammed her head against a wall’ during the incident, leaving her with bruises to her face.

‘During those four hours, I tried to get away but he wouldn’t let me. I thought that he was going to kill me,’s he sobbed.

‘He then left with no concern for my well-being. During and since this attack, I have lived in fear of him.’

Effie says she first came into contact with the Hollywood actor on social media back in 2016, when she was just 20 years old.

The pair purportedly commenced a romantic relationship, despite the fact Hammer ‘was married to TV personality Elizabeth Chambers at the time.

Allred confirmed that her client has handed over evidence to investigators, but says no charges have been filed. 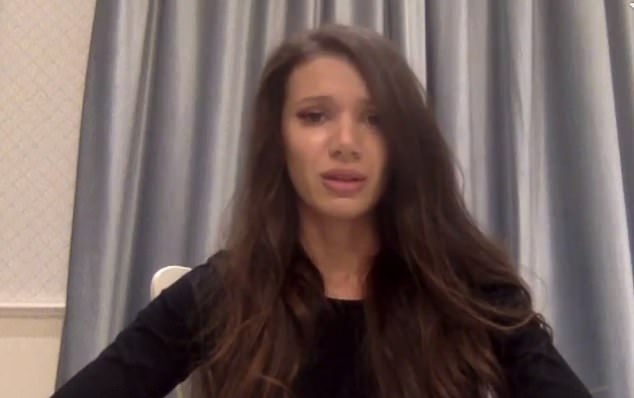 I fell in love with him instantly. The relationship progressed rapidly and the emotions from both sides became really intense.

Looking back, it is now clear to me he was employing manipulation tactics in order to exert control over me, until I started to lose myself. He would often test my devotion to him, slyly removing and crossing my boundaries, as he became increasingly more violent.

He abused me mentally, emotionally, and sexually.

On April 24th, 2017, Armie Hammer violently raped me for over four hours in Los Angeles, during which he repeatedly slammed my head against a wall, bruising my face. He also committed other acts of violence against me to which I did not consent. For example, he beat my feet with a crop so they would hurt with every step I took for the next week. During those four hours, I tried to get away but he wouldn’t let me. I thought that he was going to kill me. He then left with no concern for my well-being.

I was completely in shock and couldn’t believe someone I loved did that to me. I tried so hard to justify his actions, even to the point of responding to him in a way that did not reflect my true feelings.

During and since this attack, I have lived in fear of him and for a long time I tried to dismiss his actions towards me as a twisted form of love.

Now that he no longer has any power over me, I have come to understand that the immense mental hold he held over me was incredibly damaging on many levels.

On January 10 Hammer’s name began trending on Twitter when anonymous Instagram account HouseOfEffie started sharing screenshots allegedly between Hammer and his exes, exposing sick fantasies including that he ‘wanted to cut off’ his girlfriend’s toe and ‘keep it in his pocket’, to take out and barbecue their ribs, keep them as his sex slaves, and to act out raping them.

Hammer texted the woman he had been sexting for the past six weeks the next day, telling her the screenshots were ‘invasive and shi**ty’.

‘I feel a bit overwhelmed to be honest. It’s very invasive and shi**ty to get kink shamed by the internet ha,’ he said.

‘I am happy. Life is good. This is just a hard moment. I am very happy. And very zen. Learning through every struggle and being grateful for it all.

‘I’ve gotten a lot of offers from girls who said I can eat pieces of them haha.’

The woman blocked him the next day and says she has not spoken to him since.

‘I started messaging him early to mid December. He was very responsive. It was from his official verified Instagram account,’ she said. ‘By the end of that day he was really interested in sexting and he was sending voice messages.

‘We had conversations over the few weeks which ranged from sexual… to mundane.

‘On the day that this account, HouseOfEffie, started to blow up, my friend texted me saying ‘Did you see how all of Twitter is talking about how Armie Hammer is a cannibal?’

‘I sent him a voice message saying how are you feeling and he said he felt he was being kink shamed over the internet.

‘He started to ask me things that started to turn really sexual again, and this is in the height of the scandals coming out. I blocked him after that and never talked to him again.’

In an interview with DailyMailTV last week Hammer’s ex Paige Lorenze said she believed some dangerous men hid behind the acceptance of the kink movement in order to abuse women.

‘I’m not trying to kink shame at all,’ Lorenze said. ‘But I think that dangerous men [sometimes] use this as like a smoke screen for abusing and hurting women for their own sexual pleasure.

‘I am holding him accountable and I think he knows that he’s caused a lot of women pain, even if he doesn’t want to admit it right now. And there is power in numbers.’

‘This [situation] is terrible, it’s so unfair on his children and I think everyone is just so disgusted and shocked.’

Lorenze, 22, who dated Hammer late last year, opened up in the interview about her ‘deeply traumatic’ relationship with the movie star, describing how it left her emotionally and physically scarred.

The former professional skier-turned-Instagram model provided DailyMailTV with an exclusive image of a sickening scar just millimeters away from her private parts that was left when Hammer allegedly carved his first initial ‘A’ into her skin during a kinky sex game.

She also revealed that Hammer allegedly learned how to tie women up by practicing on mannequins he stored in the basement of the $5.8 million home he shared with his estranged wife Elizabeth Chambers and their two young children in Los Angeles.

Lorenze claimed that Hammer talked about wanting to strangle his dog, a Welsh Terrier named Archie.

‘He would get angry at his dog and say like: ‘I’m going to kill this dog, I would have strangled him if you weren’t here,” she said, noting that she does not believe he ever hurt the animal.

Lorenze said Hammer often tied her up, hit her with paddles and planned out ‘high protocol nights’ of painful sexual moves, which often left her covered in bruises.

She said her lover – 12 years her senior – was ‘sweet and kind’ but ‘manipulative’.

‘I think he definitely loved it that I was younger. He always had me wear lingerie and tied me up,’ she said.

‘I just kind of agreed to it and let it happen, I was just trying to please him.

‘He would say things like: ‘I want to bite a piece of your skin off and eat it,’ he would bite me so hard. Sometimes it would basically break skin.’

A lawyer for Hammer has categorically denied the allegations against him, calling them ‘patently untrue’.

‘Any interactions with this person, or any partner of his, were completely consensual in that they were fully discussed, agreed upon, and mutually participatory,’ Hammer’s attorney said in a statement to DailyMail.com.