Woman, 25, discovers she has a rare vaginal clamping syndrome that prevented her from having sex

A woman who has a rare vaginal clamping syndrome has celebrated finally having sex with her husband.

Mary Staud, 25, from Texas, was diagnosed with vaginismus not long after trying to lose her virginity to her 26-year-old husband, James.

The day after their wedding in 2014, the couple had tried to have sex but Mrs Staud’s vagina felt like a ‘brick wall’.

A doctor diagnosed her with vaginismus – when the vagina suddenly tightens up whenever an object is inserted, which left Mrs Staud feeling like a ‘useless wife’ and depressed.

It also explained why, four years earlier, a tampon had got stuck inside Mrs Staud’s vagina the first time she used one in 2010.

After hours of pain, in which she was given pills to relax at hospital, the tampon was ‘cut out’ by doctors.

After years of shame, Mrs Staud – a nanny and gym instructor and devout Christian – sought help from a physiotherapist in 2018 and was able to consummate her marriage, and hopes to have children.

Mary Staud, 25, from Texas, discovered she has a rare condition that prevents her from having sex with her husband after being unable to remove her tampon 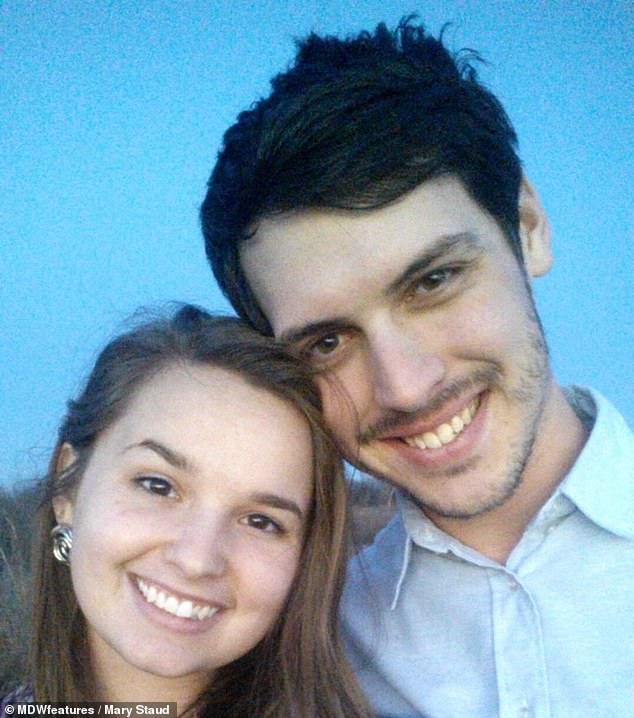 A doctor diagnosed vaginismus – when the vagina suddenly tightens up whenever penetration is attempted – which left Mrs Staud feeling like a ‘useless wife’ to her husband, James, pictured

Mrs Staud said: ‘I felt like I was an incomplete package; like I was half a woman, a useless wife.

‘I developed a lot of anxiety around sex. I also became depressed and self-indulged in food and alcohol.

‘I became extremely angry and frustrated with my body and with God after being diagnosed with vaginismus; I didn’t care about my body anymore after that.

‘I didn’t take care of it; I smoked, I drank, I overate. I’ve slowly had to be thankful for what it can do and how it has served me and blessed me for so long.’

Mrs Staud first noticed there wasn’t something right when all her friends could use tampons except her.

She said: ‘I tried, but it felt like there was a wall there, and when I forced it in it was painful and uncomfortable, so I would immediately take it out.’

But one summer, during a church camping event in 2010,  she had no choice but to leave it in.

The group were supposed to be spending all day on the beach playing in a volleyball tournament, and to Mrs Staud’s disappointment, her period came.

She was determined to enjoy her time, so she decided to use a tampon which took a while to get in.

Mrs Staud said: ‘A few hours later I went back to my room to change it out. To my utter horror I could not remove the tampon. It was stuck.

‘I’m not lying, it was literally stuck; my worst nightmare was happening, and I was in a total panic and in a lot of pain.

‘Since I hadn’t had sex yet, I guess my hymen was still attached, or at least I had some extra skin covering my vagina.

‘The pastor’s wife took me to the hospital, where they tried to make me relax by giving me several different pills.’ 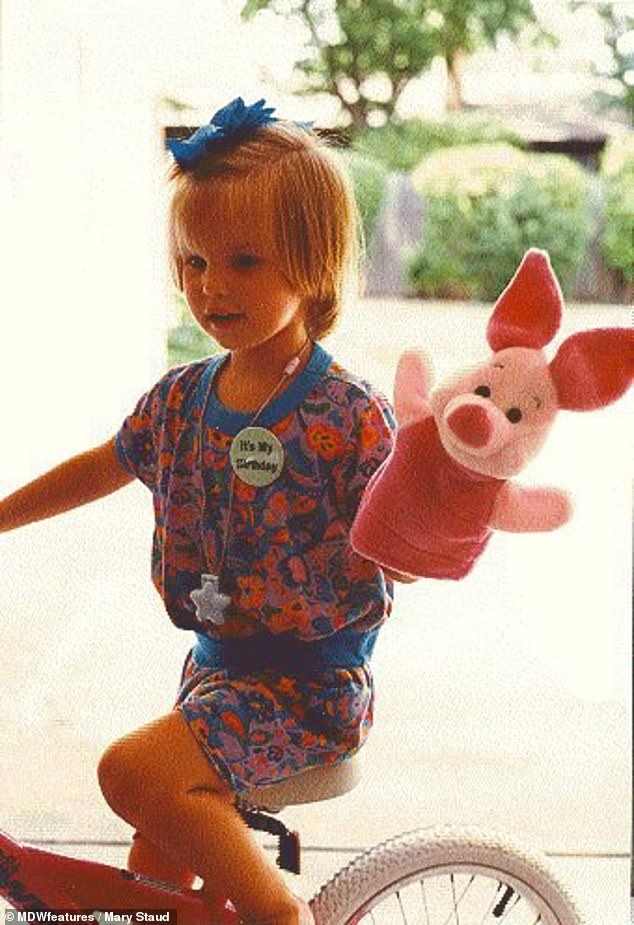 Due to her Christian background, Mrs Staud (pictured as a child) abstained from sex until she was married. She first noticed symptoms of her condition when she was unable to use tampons 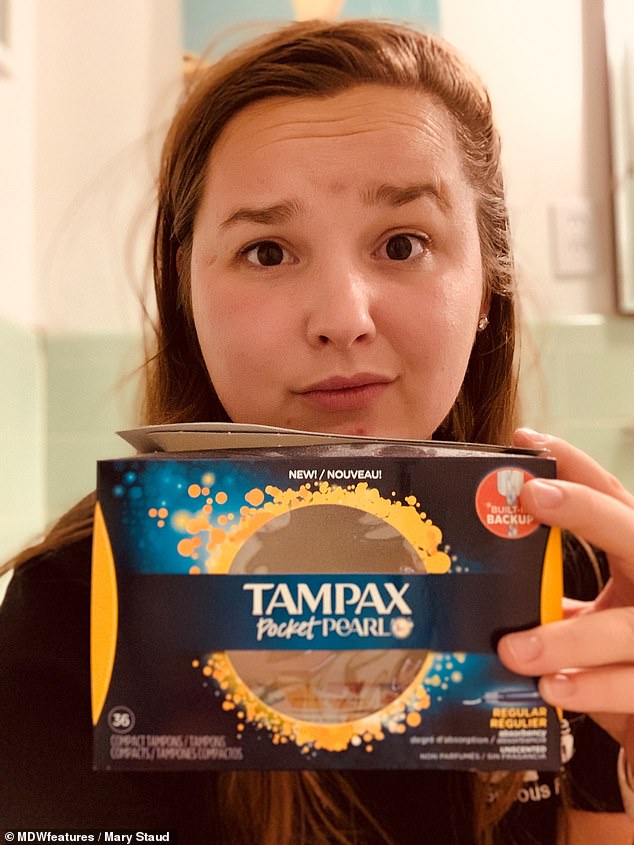 Mrs Staud, a nanny and gym instructor, was horrified to find the tampon was stuck inside her the first time she used one in 2010. After hours of pain doctors cut the tampon out and she refuses to wear them anymore. She is pictured holding a box of tampons

After some time the doctors managed to surgically remove the tampon.

Mrs Staud said: ‘They were shocked that I was still awake. I guess they didn’t believe that I was in such pain. Through many tears and screams, they were able to cut the tampon out.’

Following her traumatic experience, Mrs Staud has since refused to wear a tampon again.

In 2011, Mrs Staud met the love of her life, Mr Staud, at high school while they were in physics class. They began dating and fell in love in February that year.

Due to her Christian background, Mrs Staud abstained from sex until she was married. So in 2014, the day after she and Mr Staud got married, they felt ready to have sex.

However, the problems returned and she was in excruciating pain.

Mrs Staud said: ‘I did not realise that sex would be impossible with my husband. The pain was too much and it felt like a brick wall was keeping him from entering me.’

After trying and failing for a couple of months, Mrs Staud visited her doctor who suggested she may have vaginismus.

Vaginismus is a condition where the vagina suddenly tightens up as you try to insert something into it, including when penetration is attempted.

Often there is no obvious explanation for why it happens, but some things thought to cause vaginismus include a bad first sexual experience or a belief that sex is shameful or wrong. 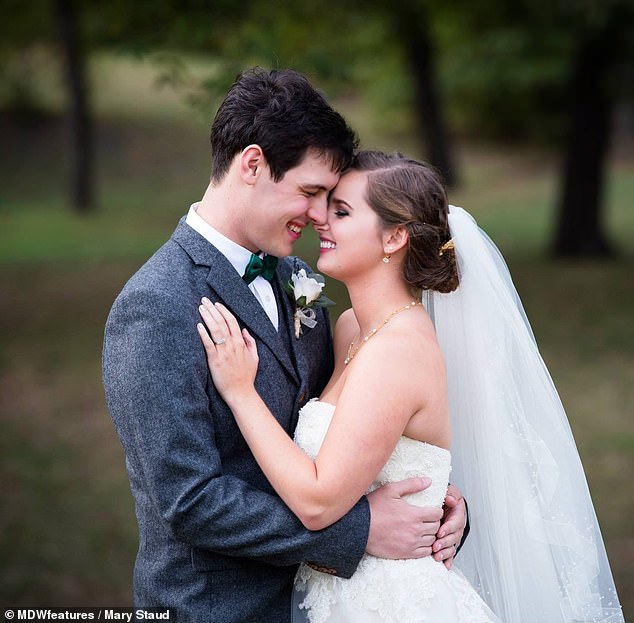 The day Mr and Mrs Staud got married in 2014, they were ready to have sex. However, her vagina felt like a ‘brick wall’ every time they tried 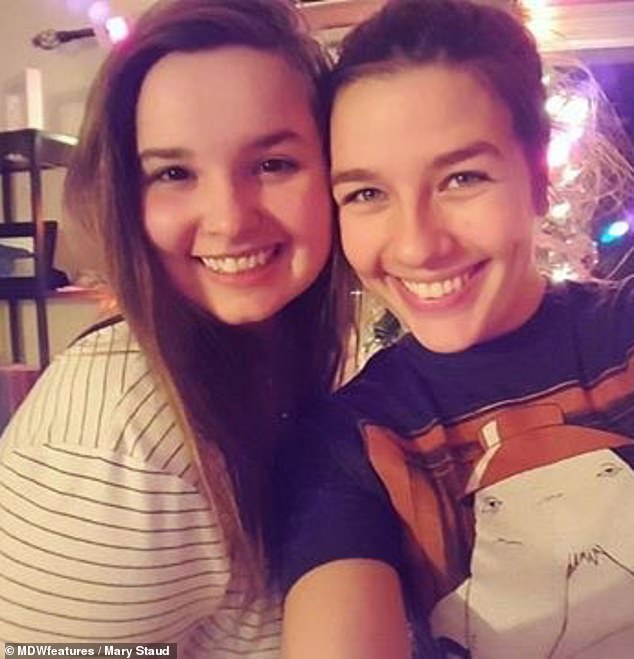 For two and a half years, Mrs Staud spiralled into shame and feeling guilty about not being able to consummate her marriage. She is pictured with a friend

Doctors told Mrs Staud that it could just be skin blocking the vaginal canal, so she requested they remove her hymen and any extra skin.

However, when they tried to have sex again several weeks after the surgery, it still didn’t work.

For two and a half years of going into a shame spiral and feeling guilty about not being able to consummate their marriage, she decided to find out more about vaginismus online and how to ‘cure’ it.

She ordered a dilator – a tube that comes in varying sizes that is inserted into the vagina to allow a patient to practice relaxing the muscles around an object.

Without much luck, in August 2018, Mrs Staud met with a pelvic floor physical therapist, who helped her regain control over her pelvic floor muscles.

She received manual therapy where they stretch and loosen the muscles by using a dilator.

Mrs Staud said: ‘I also received dry needling on the muscles surrounding my vagina. This was the most painful form of therapy for me, but it helped a lot to reset my muscles down there.’ 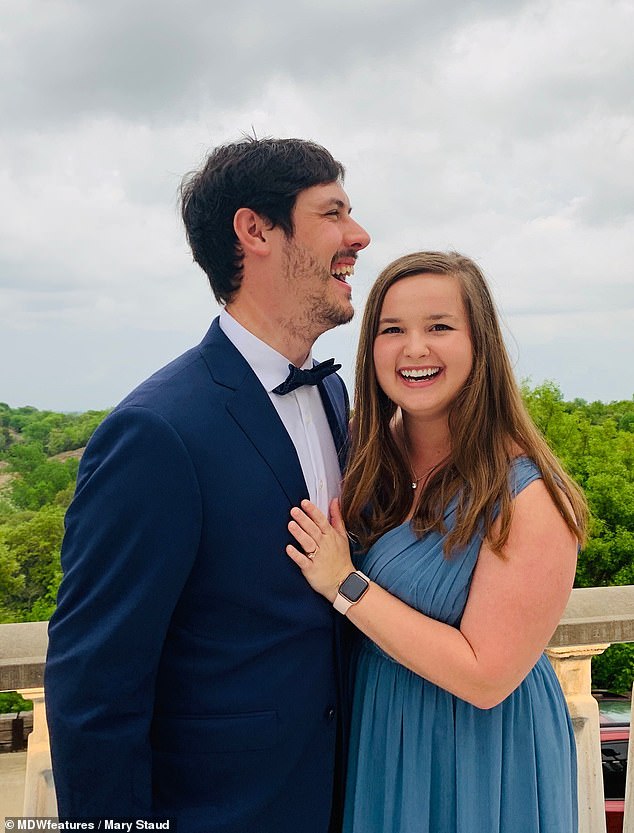 Mrs Staud, pictured with her husband, said: ‘I developed a lot of anxiety around sex. I also became depressed and self-indulged in food and alcohol’ 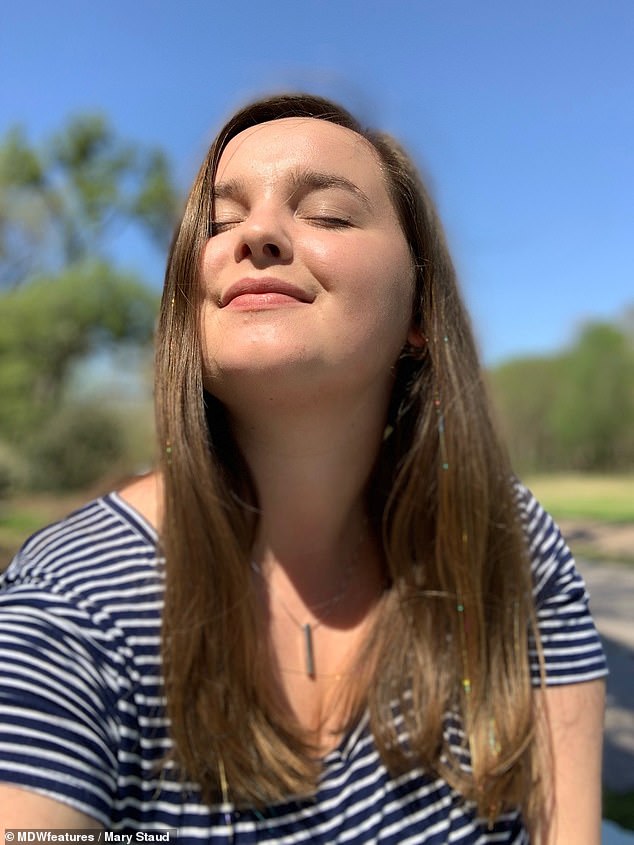 Mrs Staud used physiotherapy to overcome her condition. This involved controlling her pelvic floor muscles, manual therapy which stretches and loosens the muscles by using a dilator and surgery (which did not work)

The programme was successful and Mrs Staud was able to have sex with her husband for the first time.

Mrs Staud said: ‘Our sex life is worlds better. I feel confident and like a sensual woman is supposed to feel with the person she loves.

‘I still experience pain sometimes during intercourse, but through communication and relaxation techniques I’ve been able to overcome it.

‘I have to admit, when I first overcame vaginismus, it felt like I was a newlywed again. I was new to everything and we had sex a lot. Now we probably have sex once a week.’

Throughout her journey, Mr Staud has shown support and empathy towards her condition and she has felt secure in herself.

However, some have not been so understanding.

Mrs Staud said: ‘My mom had a hard time understanding my diagnosis and often said “just try to relax” or “have a glass of wine before sex” but of course those things don’t help.

‘When I was diagnosed, I felt so lost and alone. I hope to minimise the stigma around pelvic floor dysfunctions and create a more honest and encouraging community for women.

‘Don’t be afraid to ask for help and speak up for yourself. There are too many horror stories out there where women experience pain but are too afraid to speak up about it to their doctor or their partner.’

Vaginismus occurs when the vagina suddenly tightens up whenever penetration is attempted.

The woman has no control over it, which can be extremely distressing.

It affects between 0.5 and one per cent of women.

As well as struggling to have vaginal sex, many also find it difficult to use a tampon.

If they can achieve penetration, sufferers may then experience a burning or stinging sensation.

However, vaginismus does not necessarily affect a woman’s ability to get aroused or enjoy other forms of sexual contact.

Vaginismus often has no clear cause but can include a woman:

Vaginismus can sometimes occur even if a woman has enjoyed penetrative sex in the past.

If a woman suspects she may have vaginismus, she should make an appointment to see her GP.

The consultation usually involves asking about her symptoms and rarely requires an internal examination.

Treatment is usually therapy to help a women understand her feelings about sex and her body. Relaxation techniques such as mindfulness can also help.

In more severe cases, vaginal trainers, which are shaped like tampons and come in different sizes, can help a woman get used to have something inserted in her vagina.