Woman, 26, says people thought she was STUPID growing up just because she’s disabled

A woman who was bullied for her disabilities growing up and during her first teaching job said she aspires to teach her students how to be accepting of others.

School teacher Megan Grannan, 26, was born with the skeletal disorder metatropic dysplasia which causes short stature (dwarfism). During her own school years, the New Jersey-native was called ‘midget’ and made to feel stupid in class.

Now that she is an educator herself, Megan said she wants to teach the new generation about ‘self acceptance’; something she wished she had learned herself sooner.

Determined: Teacher Megan Grannan wants to inspire her own students to be kinder and more accepting towards each other after she was bullied during her school years 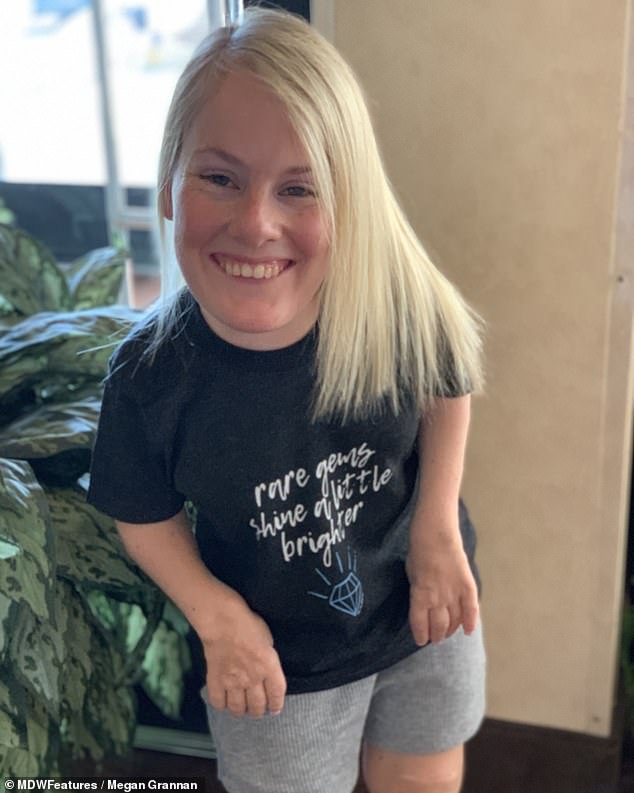 Self-acceptance: The New Jersey-based educator said she wished she had learned how to accept her differences sooner in life 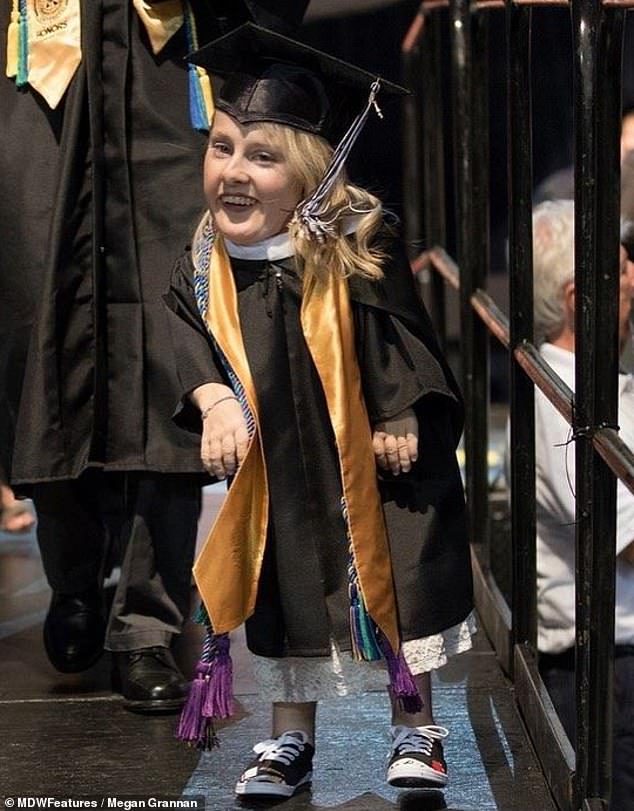 Achievement: Megan, pictured in May 2018 when she graduated, decided she wanted to be a teacher to help the next generation of children with self-acceptance

Megan appeared to have an unusual build, including an elongated torso and short limbs, so doctors believed she might have a condition called metatropic dysplasia and this was later confirmed when she was one month old. 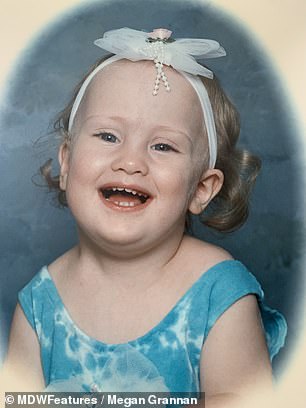 Different: The New Jersey-native, pictured as a child, said she began to realize she was different when she was eight-years-old as she couldn’t do things the other kids could

Children born with metatropic dysplasia are born with shorter limbs but as they get older their spine will become progressively curved, so by adulthood they have a very short stature.

‘My parents had no idea that they would have a daughter with a rare diagnosis. My mum fought for me for everything so that I could be like everyone else,’ Megan said.

When she was growing up, Megan went through 26 surgeries to correct various orthopedic concerns.

‘There were a lot of orthopedic concerns, the way my bones were growing and what was going to happen next was a constant concern. It was always about correcting an issue,’ Megan explained.

‘I had a neck fusion at the age of four, that was so that if I fell I wouldn’t become paralyzed.

‘Then other surgeries tried to straighten my legs and hips – that ranged from Botox injections and being in a body cast, to having pins and plates in my knees and hips. 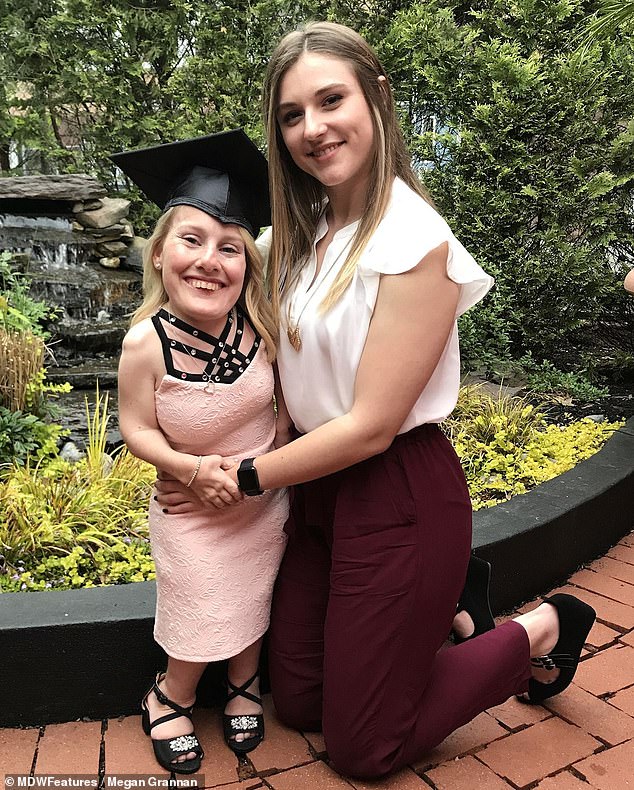 Calling: Megan, pictured with her twin sister Erin, realized she wanted to pursue a career as a teacher when she got to university and now she is completing her masters degree 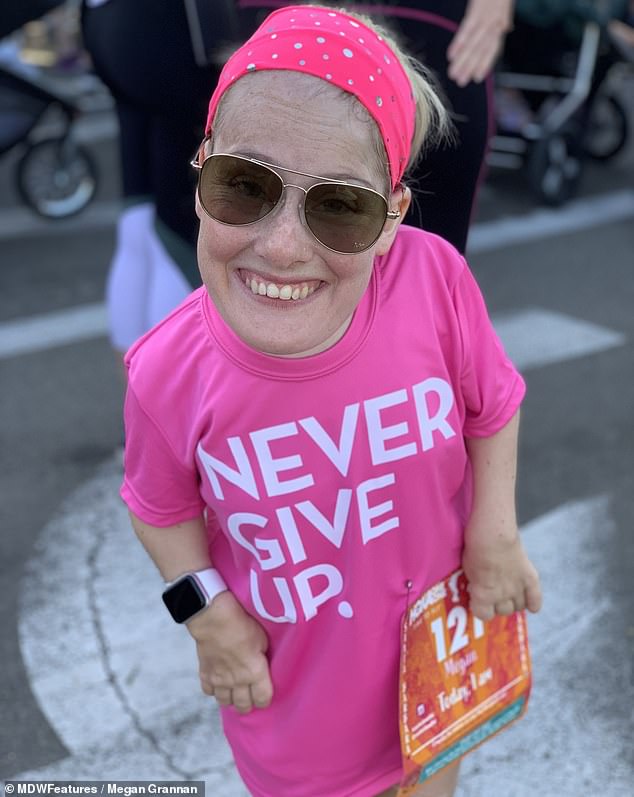 Never give up: Megan, pictured recently in California, after completing a 5K walk for charity

‘I’ve also had to have hip replacements before I turned 24,’ Megan said.

‘After the hip replacements, my legs started to turn inward and then they put an external fixator on my leg that you have to turn the pins so it can be realigned.

‘This was painful and scary because you could feel the bone moving.’

Growing up and having to have so many different operations was very challenging.

She said: ‘I was about eight when I became more conscious of my condition.

‘I realized that I would get a lot more attention and wasn’t allowed to do certain sports like other kids.

‘I would always get stared at and I didn’t understand why because my parents raised me like any other child. My twin sister

‘Erin pushed me to do everything in life. I wanted to keep up with her.’

Megan missed a great deal of school for her many surgeries and she often felt like people stared at her because she looked different and she was frequently called ‘midget’, which she insists is still hurtful when she hears it now. 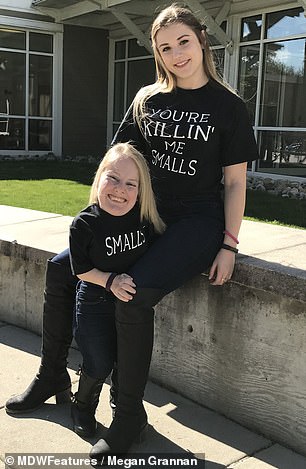 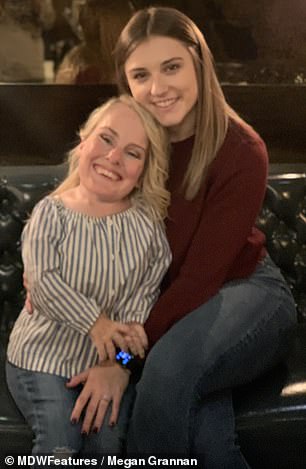 Sisters: Megan and her twin Erin, pictured with her left and right, whom she said always pushed her to do everything growing up 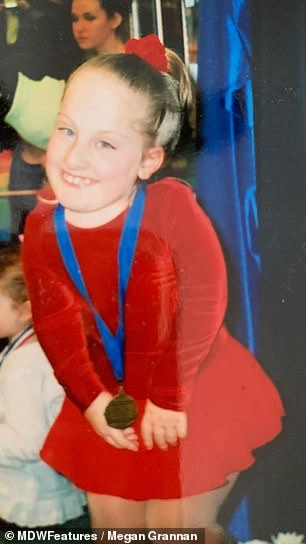 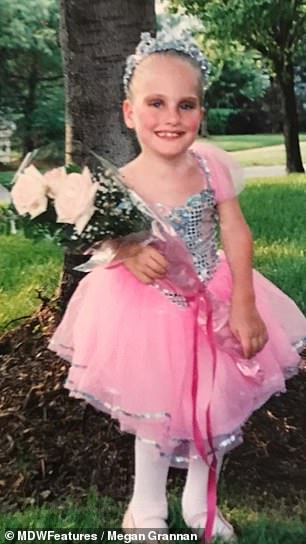 Childhood: Megan, pictured in her youth left and right, struggled in school as people would be cruel and pretend to be her friend

‘The surgeries had a huge impact on me. I was put in the special education system due to the fact I was missing so much school.

‘I got called “midget” and people would say, “She doesn’t know what she is talking about because she is disabled”. Just because someone is disabled doesn’t mean anything. It hurt and it still hurts today to hear these things.

‘People would say that they were my friends and then turn out not to be. It was hard and I honestly couldn’t wait to get out of school. I never had a boyfriend in high school, and no one looked at me as pretty, so it was hard. 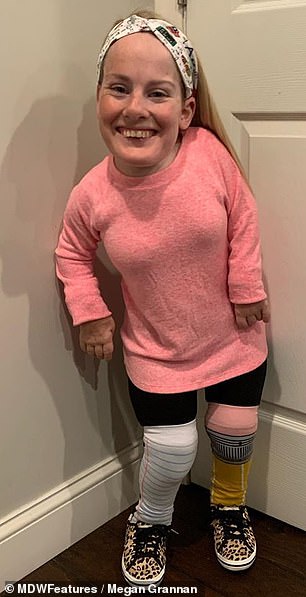 Lesson: Megan, pictured, wants to teach her students how to be tolerant of everyone no matter what

While studying at university, Megan decided she wanted to teach children, despite some people telling her she wasn’t capable of qualifying.

Now, Megan is proud to be able to teach her young pupils the importance of accepting other peoples’ differences.

‘She is also very thankful that the other teachers and her pupils don’t treat her any differently.

After years of hating her uniqueness, Megan now tries to remain positive because she has faced adversity for most of her life and was determined to come out on top.

While teaching her class, Megan uses the opportunity to show her young pupils that it’s important to appreciate other people’s differences as this is a lesson she wished had been ingrained when she was young.

‘I went to country college first and that is where I found out that I wanted to be a teacher.

‘Then I transferred to Stockton University and lived on campus and got my bachelor’s degree in liberal studies and a concentration in elementary education.

‘I am now pursuing my master’s degree in special education at Drexel University,’ she said.

‘The staff that I work with are just amazing. 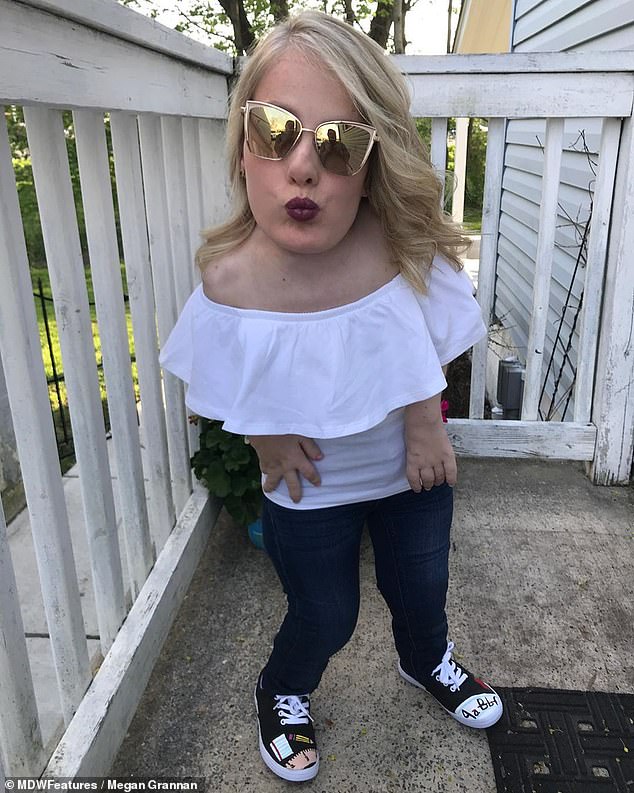 Hurtful: Megan, pictured, said there are certain words that are still hurtful if she hears them as it reminds her of bullies in her school growing up 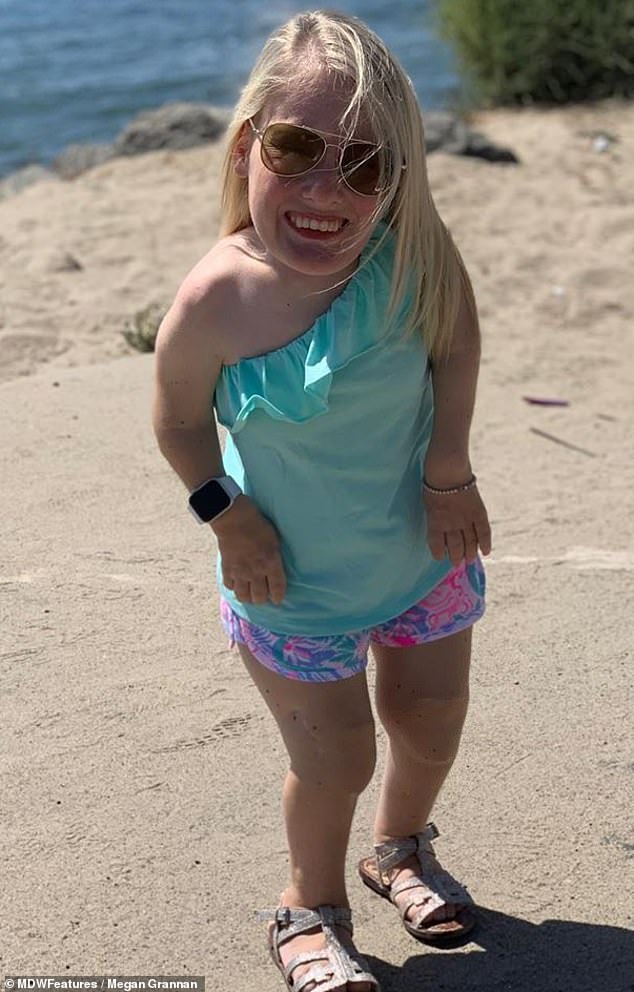 Positive: The 26-year-old said it’s important for her to stay positive as she has been through so much in her life already but she ultimately knows what she wants to achieve

‘They have accepted me with open arms since day one and that was such an amazing feeling. They treat me like everyone else.

‘I started working with them after having worked in a district that treated me very poorly and I was just so broken as a teacher.

Patients with this disorder typically have short ribs, short arms and legs, abnormal curvature of the spine, and extremely short stature.

It is considered a rare genetic disorder.

‘The school district that I am in now put me back together in a day. I couldn’t be more thankful for them and the students that I get to teach.

‘I get to teach the students about differences and acceptance.

‘This is a huge lesson that children need to learn as they will come in contact with different people who are different to themselves.’

Megan also spoke about how she tries to prevent metatropic dysplasia from holding her back, and although it can be difficult sometimes, she remains positive.

‘It is hard sometimes, but I stay positive because I have been through so much, but I’m determined to get what I want and I will fight for it,’ she said.

‘I will never give up on anything which has been hard because there have been times where I want to throw in the towel, but I know I can’t. I always have a plan and I must stick to it and it has to go that way.

‘The message I want to share with people is to never give up and accept yourself for who you are. Times get tough and I know that but don’t give up on yourself. It took me so long to accept myself for who I am, and I wish I would have done it sooner.’