Woman, 26, who gave birth to NONUPLETS in Moroccan hospital gets through 100 nappies a day

A woman who gave birth to a world record nine babies has revealed how they are getting through a staggering 100 nappies per day and six litres of milk – but that she is too tired to look after them and spends most of her days sleeping and watching television.

Halima Cisse, 26, had the nonuplets at the Ain Borja clinic in Casablanca, Morocco on 5 May, breaking the current world record set by ‘Octomum’ Nadya Suleman in 2009, who gave birth to eight babies that survived.

Ms Cisse’s nine tots, who she insists were conceived naturally, weighed between 500 grammes to 1 kilo when they were born remain in incubators in the clinic’s intensive care unit where they are being looked after round the clock by a team of doctors and nurses.

In a world exclusive interview from her hospital in Morocco, Ms Cisse said she only found out she was having nine babies minutes before the birth by caesarian.

‘It was a total shock when I found out that I was having nine babies because I thought it was going to be seven,’ she said.

Halima Cisse (right), 26, and her husband Kader Arby, 35, pose together at the Ain Borja clinic in Casablanca, Morocco, with one of their world record-breaking babies, a boy named Mohamed VI 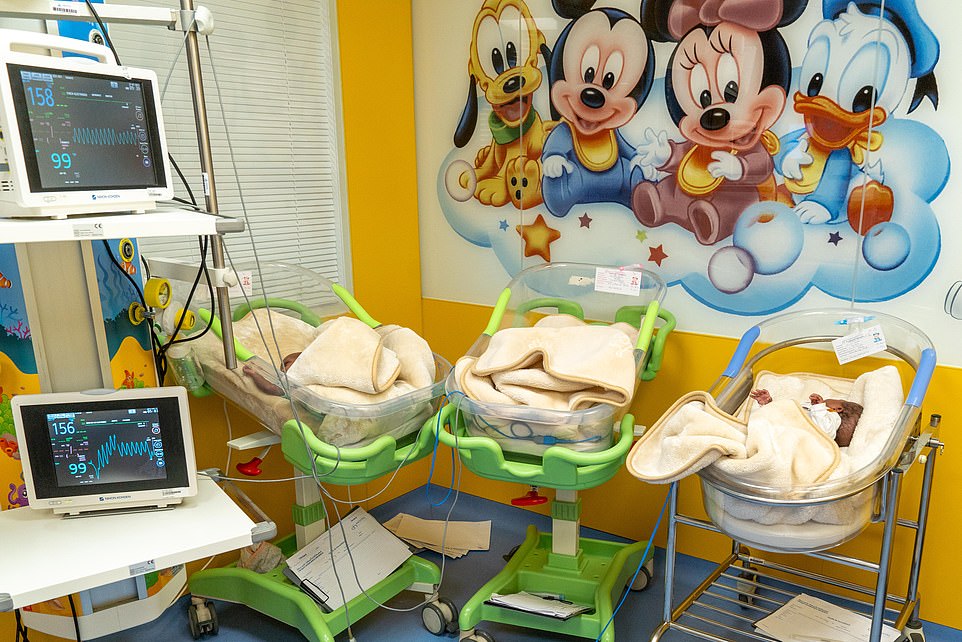 Ms Cisse gave birth to a world record nonuplets in Morocco on May 5. Almost three months on and six of the babies are still in incubator being closely monitored by Nurses at the Casablanca hospital 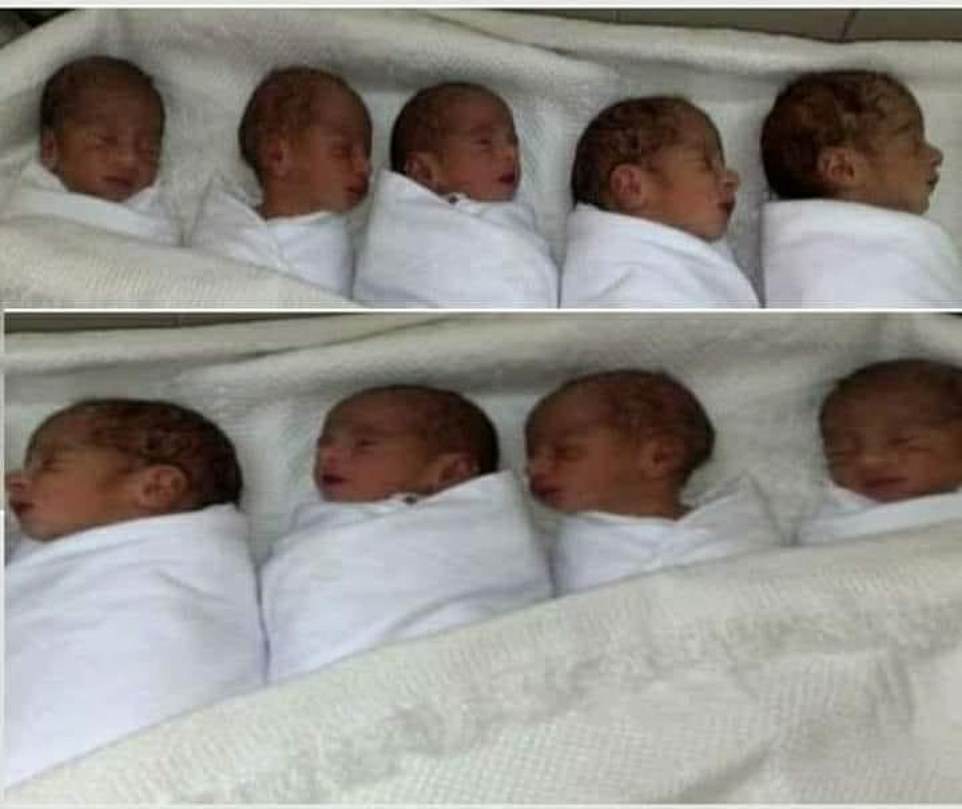 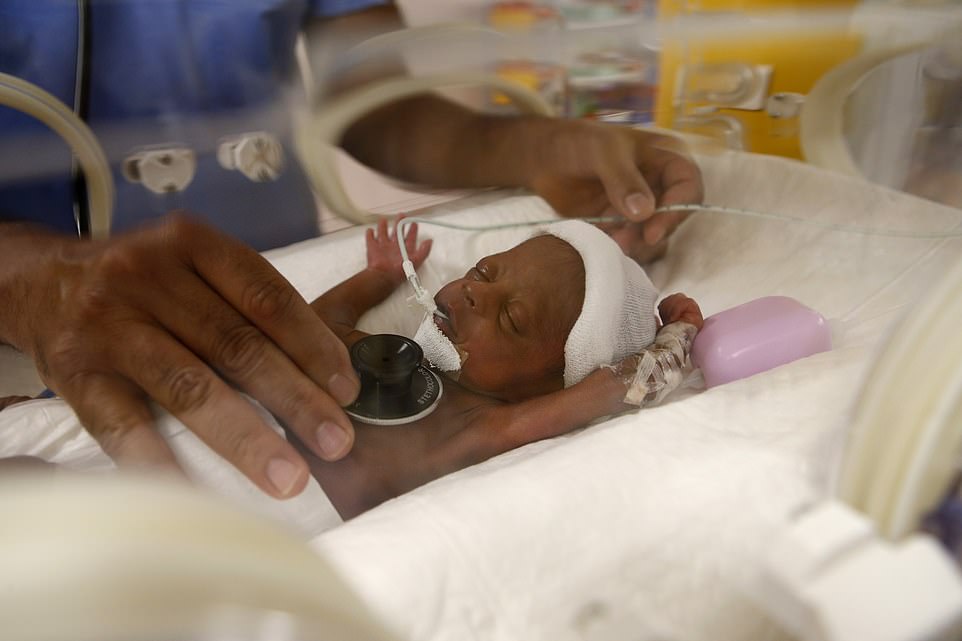 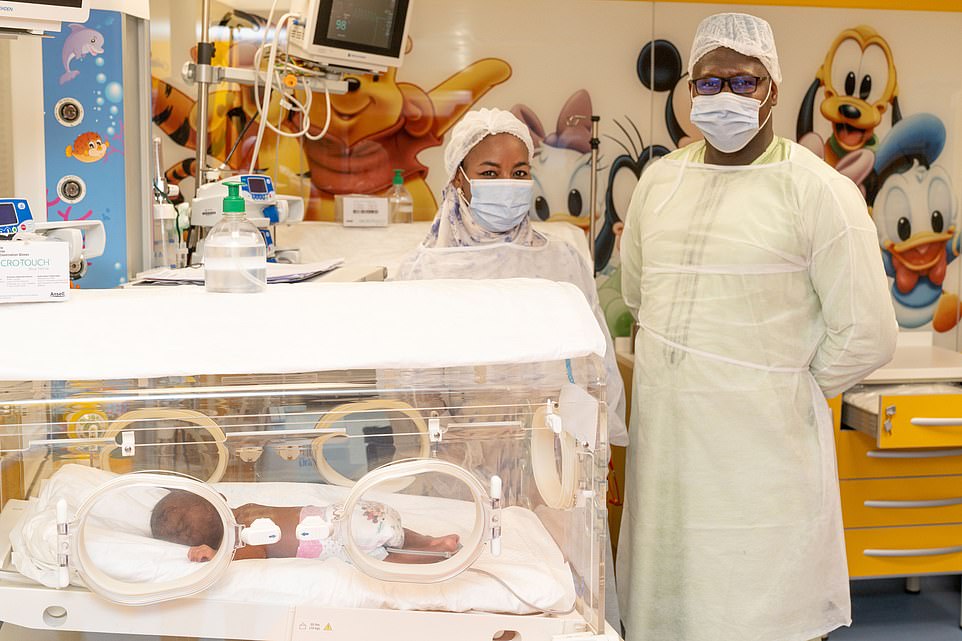 The proud parents stand next to the incubator of one of their extraordinary brood. They have a young daughter, an older sibling for the babies back home in Mali, making them mother and father to ten children in total

‘As the babies were coming out, there were so many questions going through my mind. I was very aware of what was going on and it seemed as if there was an endless stream of babies coming out of me.’

She added: ‘My sister was holding my hand but all I could think about was how would I look after them and who was going to help me?’

Speaking as she looked over all nine babies asleep in incubators, she revealed that almost three months after undergoing the arduous birth she is still recovering and only visits her babies twice a day for up to 30 minutes to ‘bond’ with them because she does not have the energy to keep up with their exhausting care regime.

They are fed every two hours, drinking a combined six litres of formula milk per day while getting through 100 nappies, which are changed every two hours. They also undergo health checks every three hours. So far the care bill for treating the babies has cost £1million and been paid for by the Malian government 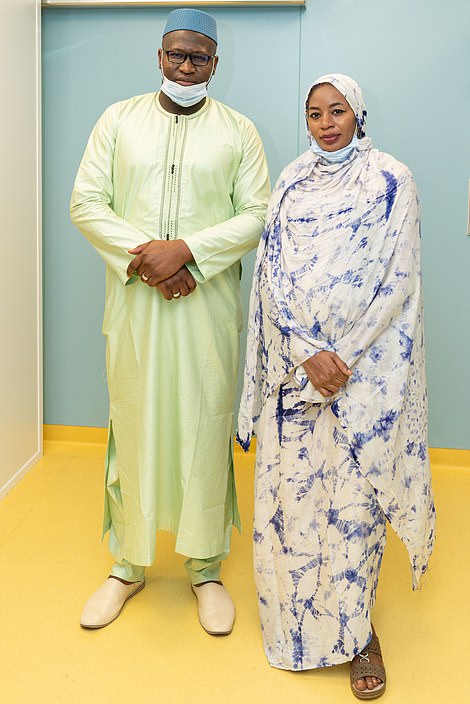 Ms Cisse revealed that within a month of giving birth she ran out of breast milk. Her babies are expected to remain in hospital for another two months.

‘It’s a lot of work and I still feel very weak, she said. ‘My pregnancy was very difficult, and I need a lot of rest.

‘Giving birth to one child is hard enough but having nine is unimaginable. It’s astonishing the amount of work that is involved in looking after them. I’m grateful to the medical team that are doing all the hard work and the Government of Mali for funding this.’

Ms Cisse is staying in a private room on the clinic’s third floor, leaving it only to visit her babies.

She almost died from blood loss during the delivery with doctors estimating that her belly alone weighed almost 30 kg, made up of the babies and amniotic fluid.

Ms Cisse said: ‘Thankfully I don’t have to get up in the night if the babies start crying because the nurses deal with all of that, so I manage to get plenty of sleep. I’m lucky to be alive and have all this support.’

Ms Cisse gave birth by Caesarean section, accompanied by her sister Aisha while her husband Kader Arby stayed behind at their home in Timbuktu, Mali. He was unable to travel due to COVID travel restrictions.

Mr Arby, 35 only arrived in Morocco on July 9, and after spending ten days in quarantine, saw his nine children for the first time on 19 July.

He said: ‘It was an incredible feeling and I just give thanks to God that they have survived and that their health is improving and that of my wife. When I saw them, I was lost for words, it’s been difficult to take it all in.’

The couple married in 2017 and already have a daughter, Souda, two and a half who is being looked after by relatives.

Mr Arby is a sailor in the Malian navy and admitted that looking after his family would be financially ‘challenging.’ They live in a modest three-bedroom house which he said they would now have to expand to accommodate their ten children.

He added: ‘There are a lot of things to work out about the future but for now, we are just focused on looking after our babies and getting them home. We are unable to get involved in their day-to-day care but that’s a blessing because my wife needs the rest.

‘The big concern for me is not the size of my house, how many rooms we have or money but making sure that my wife and children are OK.’ 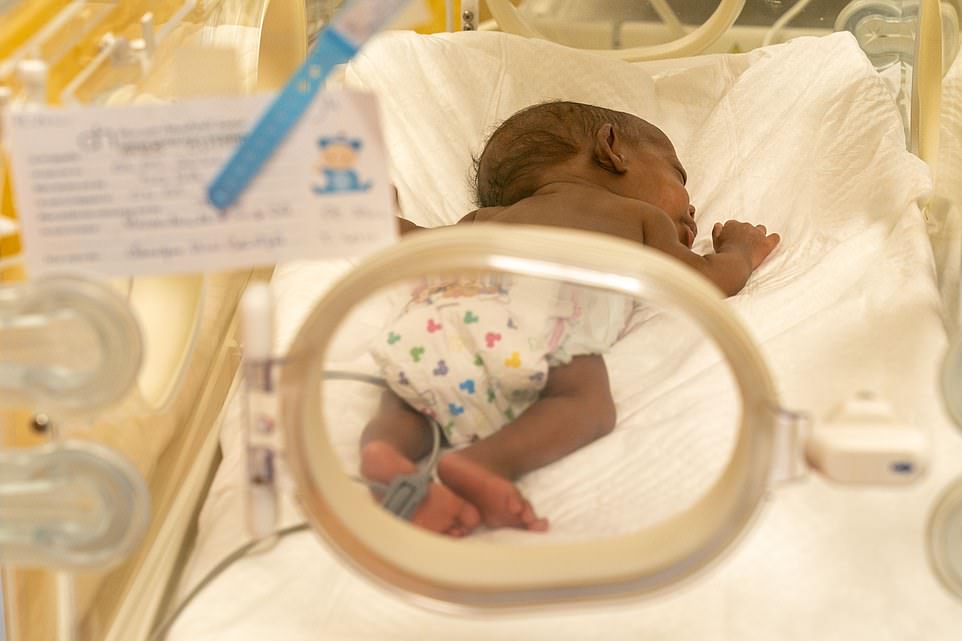 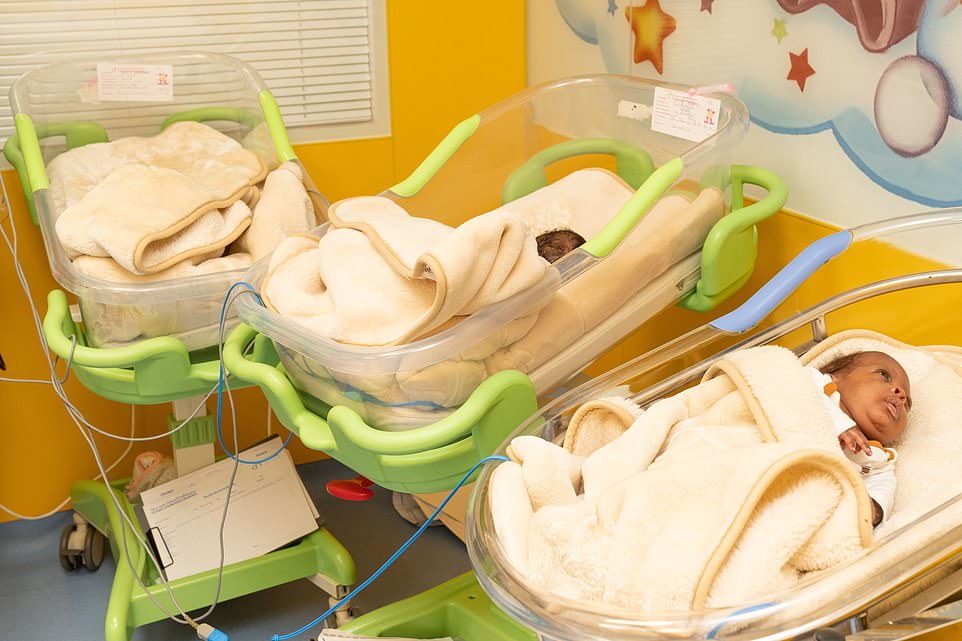 The care bill for the babies’ treatment is estimated to be around the £1million mark and they are expected to stay in hospital for at least another two months so they will not be back home in Timbuktu, Mali, until September at the earliest 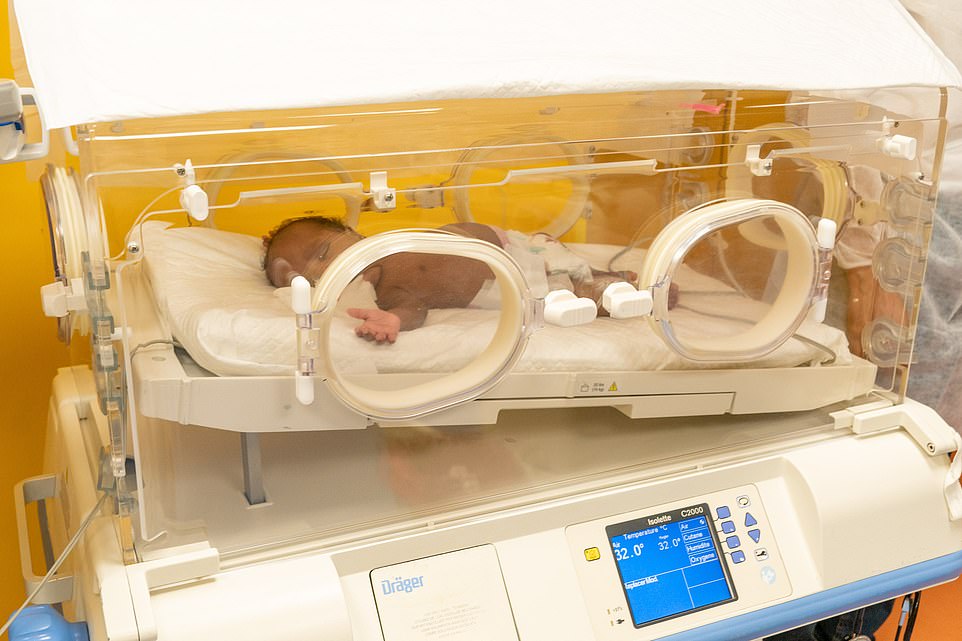 The couple were originally told that Ms Cisse was carrying seven babies by doctors in Mali, who feared that there was a less than 50% chance that any of them would survive.

Ms Cisse spent two weeks in Point G Hospital in Bamako, Mali’s capital, before she was transferred to Morocco thanks to the intervention of Mali’s President of Transition Bah N’Daw.

But minutes before her record-breaking Caesarean section got underway, she was left gobsmacked after being informed that she was carrying nine babies, a discovery which also surprised doctors.

It took 20 minutes for all nine babies, five girls and four boys, to be born with nine medical staff in attendance.

In total, Ms Cisse’s medical team at the Ain Borja clinic is made up of 35 staff. 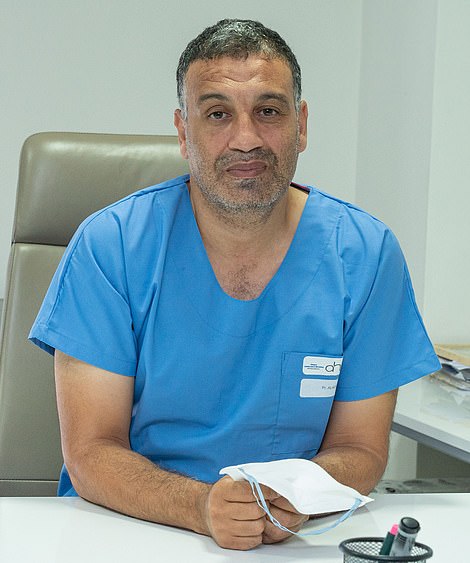 Mr Arby, a devout Muslim, revealed that as he waited for news at his home in Timbuktu he was praying.

He said: ‘My wife’s sister phoned me after the birth, and it was only then that I discovered that it was nine babies not seven. I just went numb because it was a very shocking discovery.

‘I wasn’t able to speak to my wife for 72 hours after the birth because she was so exhausted, and her health was not good. It was very difficult for me because I could only see my wife and babies via video calls.’

The couple admitted that they cannot be sure of the exact time each of the babies came out and which one is the eldest or the youngest. For now, they can only identify them by their names which are written on their individual incubators.

The babies were conceived naturally, with Mr Arby claiming that he remains mystified at the multiple births.

He added: ‘My wife is an only child while I have eight brothers and sisters. There is nothing in our family history to explain how this happened other than Allah’s grace. These children are a gift from him.’

In accordance with Islamic custom, the names of the newborns were revealed seven days after their birth.

One of the boys, Mohammed has been named in honour of the king of Morocco while another, Bah carries the name of the former president of Mali. This is in gratitude to the help the two countries’ authorities have given the family.

The two other boys are called El Hadji and Oumar.

The names for the five girls are Hawa, Adama, Fatouma, Oumou and Kadidia.

Doctors revealed that the health of all nine babies has significantly improved with the heaviest now weighing just over 3 kilos and the lightest, Arby, who is constantly being fed intravenously, around 1.5 kilos. 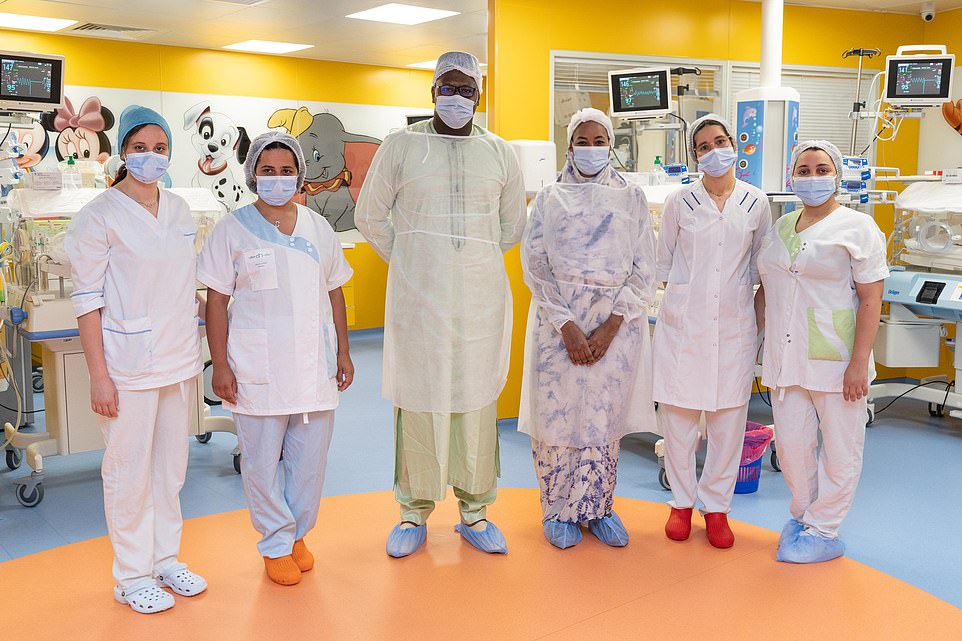 Ms Cisse and proud father Mr Arby, a sailor with the Mali navy pose with the masked nurses helping look after their babies

Professor Yousef Aloui, head of Ms Cisse’s medical team told MailOnline: ‘The health of some of the babies has improved significantly and not all nine need to be in intensive care. But we are keeping them there until all of them are stronger and to help them to bond.

‘This is the most incredible case that I have been involved in during my career. Our main challenge was to protect the babies and the mother, and I think we have achieved that.’

Astonishingly, Ms Cisse said that she and her husband had not ruled out the possibility of having more children.

She added: ‘We will see what happens, there might be more. But for now, we just want to get our babies back to Timbuktu where we want to raise them.’

Mr Arby added: ‘Nobody knows what the future holds.’