Woman, 27, who thought she had a stray lash in her eye reveals her terror after waking up BLIND

A woman who thought she had stray lash in her eye has revealed her terror after waking up without vision three days later.

Victoria Maddock, 27, had been suffering from blurry vision in her right eye which she had tried treating with eye drops.

But when she began to feel like she was ‘looking through milk bottle bottoms’ she immediately visited the local opticians.

She was diagnosed with iridocorneal endothelial (ICE) syndrome, involving swelling of the cornea and changes in the iris.

A build-up of pressure led her to develop glaucoma, a condition most common in people over the age of 70, leaving doctors shocked.

If it had been left any longer, Ms Maddock was told she could have lost vision in her right eye.

Ms Maddock, of Portsmouth, Hampshire, had surgery to drain fluid in her eye twice – the first time failing to work.

Victoria Maddock, 27, of Portsmouth, Hampshire, thought she had stray lash in her eye but woke up without vision three days later, leading to a diagnosis of glaucoma 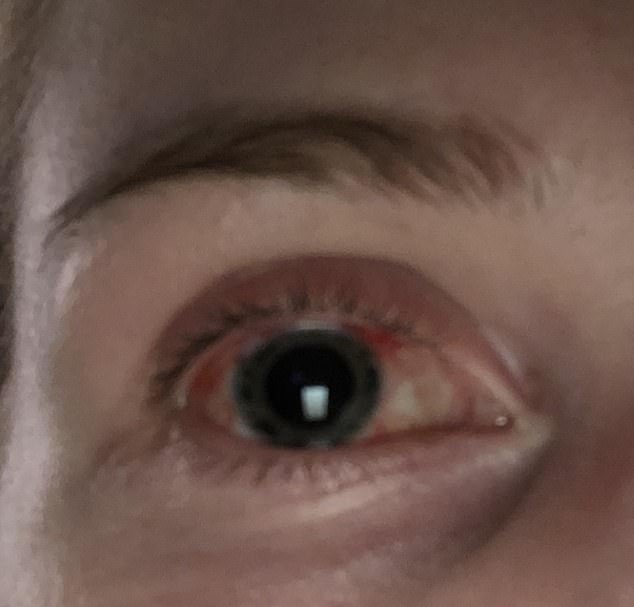 Ms Maddock was diagnosed with iridocorneal endothelial (ICE) syndrome, involving swelling of the cornea and changes in the iris, after she was rushed to hospital. A build-up of pressure led her to develop glaucoma, and with both conditions most common in people in their 70s, doctors were shocked, Ms Maddock said. Pictured, her eye at an unknown date 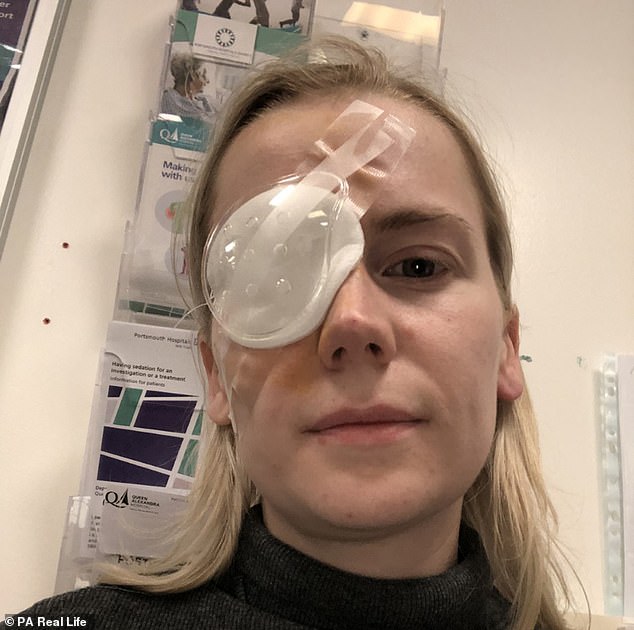 Ms Maddock, a contact controller, said: ‘If I had left it even days later, I could have lost sight in my right eye completely due to the build-up of pressure – it doesn’t even bear thinking about.

‘People think that glaucoma is an old person’s disease, but I’m living proof that it can affect anyone at any age.

‘I’m just so grateful that I didn’t hold off any longer than I did to get it checked out by a specialist.

‘For a few days my eye had been playing up and I thought nothing of it whatsoever.

WHAT IS IRIDOCORNEAL ENDOTHELIAL SYNDROME?

The features of iridocorneal endothelial syndrome (ICE) include swelling of the cornea, or the clear front part of the eye, abnormalities of the iris, the coloured part of the eye that contains the pupil, and a high risk of developing glaucoma – almost half of people with ICE will develop glaucoma.

In ICE syndrome, the endothelial cells are abnormal and they do not perform their role in keeping the cornea clear, and the cornea can become cloudy.

These abnormal cells can also increase in number and migrate to areas where they do not belong.

The abnormal cells can migrate onto the iris and cause the pupil to be misshapen, or sometimes even cause the iris to stretch so much that holes form.

ICE syndrome usually affects women more often than men, most commonly diagnosed between the ages of 30-50.

‘Then one day I woke up and I couldn’t see out of my right eye at all, it was like a thick film had been placed over it.’

Ms Maddock, who has worn prescription glasses for long distance since she was 18, was soon told by experts that the pressure in her right eye was worryingly high.

Opticians insisted that she went straight to the city’s Queen Alexandra Hospital, where she was quickly diagnosed with ICE syndrome.

ICE is when abnormal cells in the cornea, the film over the front of the eye, migrate across the eye towards the iris, the coloured part of the eye.

It affects 480,000 people in the UK, according to Fight For Sight, in women between 30 and 50 years old. The statistics for the US are unclear.

Ms Maddock said: ‘By the end of the initial assessment I was surrounded by a group of doctors, all insisting on taking a look at my eye, as it was so unusual to see ICE in someone my age.’

Symptoms include swelling of the cornea, abnormalities of the iris, and a high risk of developing glaucoma due to a build-up of pressure.

Glaucoma is when the optic nerve connecting the eye to the brain is damaged by a build-up of fluid in the front of the eye.

The risk of getting glaucoma increases with age. It is most common in those aged over 70, affecting 60million people worldwide.

Ms Maddock said: ‘It was pretty nerve-wracking. No one could believe I had glaucoma so young. One doctor said she’d only read about cases like mine before.’ 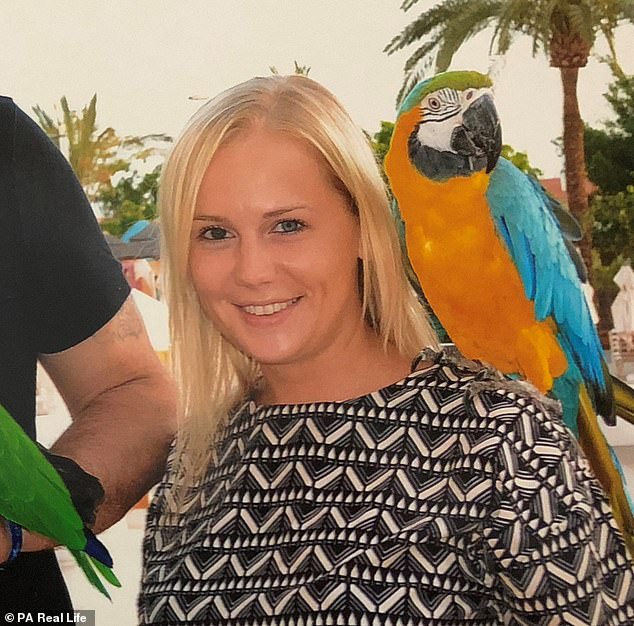 Ms Maddock, who has worn prescription glasses for long distance since she was 18, was told by experts that the pressure in her right eye was worryingly high. Pictured before 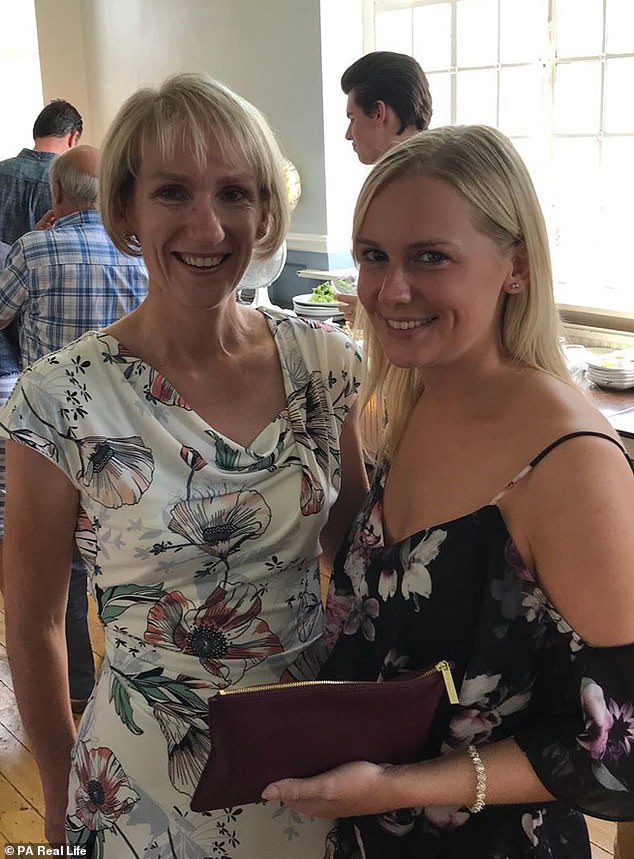 Ms Maddock, pictured with her mother, said the ordeal was nerve-wracking 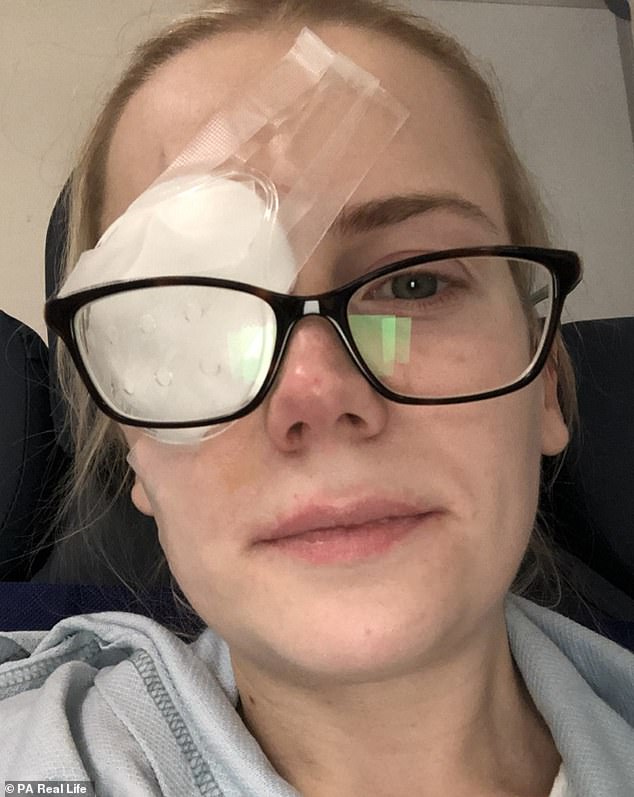 Just when Ms Maddock thought her life was returning to normal, she needed to return for more eye surgery three months after the first when she woke up with blurred vision again

It is not possible to halt the progression of ICE syndrome, according to Genetic and Rare Diseases Information Centre.

Treatment is usually focused on managing the glaucoma to help reduce pressure in the eye.

With her eye pressure reaching as high as 36mmHg, doctors booked Ms Maddock in for a trabeculectomy on November 20, 2018.

The procedure removes part of the iris, allowing fluid to drain more easily – for which Ms Maddock had a general anaesthetic due to her ‘crippling fear of needles’.

At first it seemed like the surgery had been a success, with Ms Maddock taking two weeks off work for her eye to recover before she could expose it to natural light.

Relieved to have her sight back, she was given another blow three months later when she woke up to the same terrifying scenario.

Ms Maddock said: ‘I was just getting my life back on track when I woke up with the same symptoms all over again.

‘I didn’t waste a moment going straight to the emergency eye care clinic.

‘There doctors confirmed that the cells in my eye had begun to migrate back into my iris, effectively reversing the surgery.’

Just a week later Ms Maddock was back on the operating table in the same hospital, where surgeons repeated the procedure, but under a local anaesthetic. 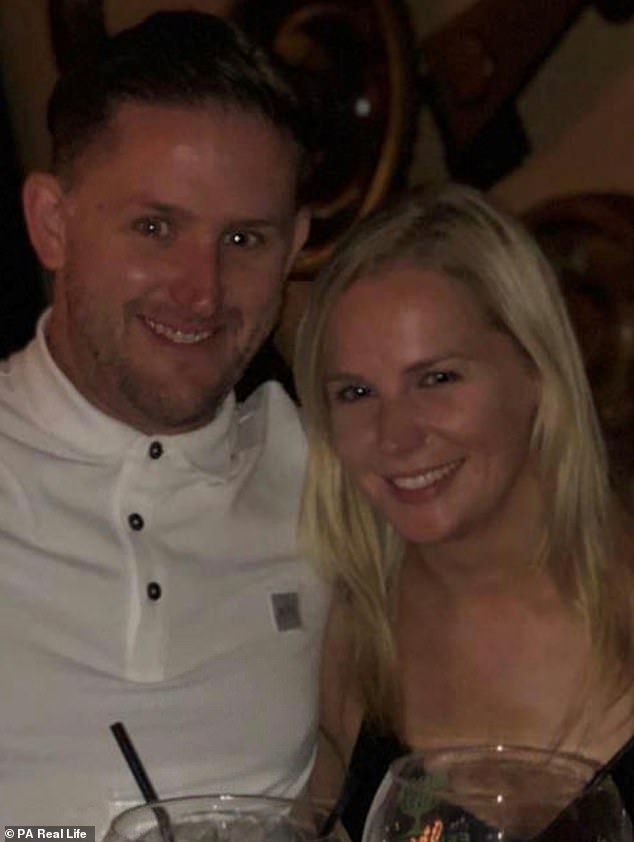 Ms Maddock is raising awareness of glaucoma in young people as she ‘never in a million years’ thought this would happen to her. Pictured with her boyfriend on an unknown date

She said: ‘Because I couldn’t see out of the eye it wasn’t half as bad I thought it would be, despite my needle phobia.

Determined to help others with the same condition, Ms Maddock is working with eye research charity Fight for Sight to raise awareness of the prevalence of glaucoma, especially in younger people.

She is campaigning for more people to realise the need to have regular eye tests – a minimum of once every two years.

She said: ‘I never in a million years would have thought this could have happened to me.

‘I wear my glasses for watching TV and going to the cinema and that’s about it.

‘Now I’ve insisted all my friends and family get their eyes checked as soon as possible. It doesn’t matter if you’ve got 20/20 vision, or if you’re as blind as a bat – just go.’

According to the Royal National Institute of Blind People (RNIB), glaucoma is so uncommon in young people that the Public Health Outcomes Framework indicator on avoidable sight loss due to glaucoma does not start counting people until they are over 40.

‘Although it’s possible to develop primary open-angle glaucoma, the most common adult form of glaucoma, before the age of 40 – it is very rare.’

The eyeball contains a fluid called aqueous humour which is constantly produced by the eye, with any excess drained though tubes.

In England and Wales, it’s estimated more than 500,000 people have glaucoma but many more people may not know they have the condition. There are 60 million sufferers across the world.

Glaucoma can be treated with eye drops, laser treatment or surgery. But early diagnosis is important because any damage to the eyes cannot be reversed. Treatment aims to control the condition and minimise future damage.

If left untreated, glaucoma can cause visual impairment. But if it’s diagnosed and treated early enough, further damage to vision can be prevented.