Woman, 27, whose weight escalated after years of comfort eating, reveals how she shed 10 STONE

A woman whose weight escalated through years of comfort eating, told how she was able to shed half her body weight after overhauling her lifestyle.

Holly Hague, 27, from Sheffield, who weighed 21st 5lb and wore a UK size 26 at her heaviest, was bullied as an overweight child, causing her to pile on the pounds a to drown out cruel remarks with food.

She became desperate to overhaul her appearance on the 1st January 2018 as part of her New Year’s resolution, when she decided to focus her mindset on gaining her ‘self-worth’ and underwent cognitive behavioral therapy.

The accounts worker, who now weighs 11st 4lb and wears size 10/12, revealed how embracing she went on a strict diet and exercise plan, swapping junk food for protein, fruit and vegetables and to achieve her weight loss aspirations. 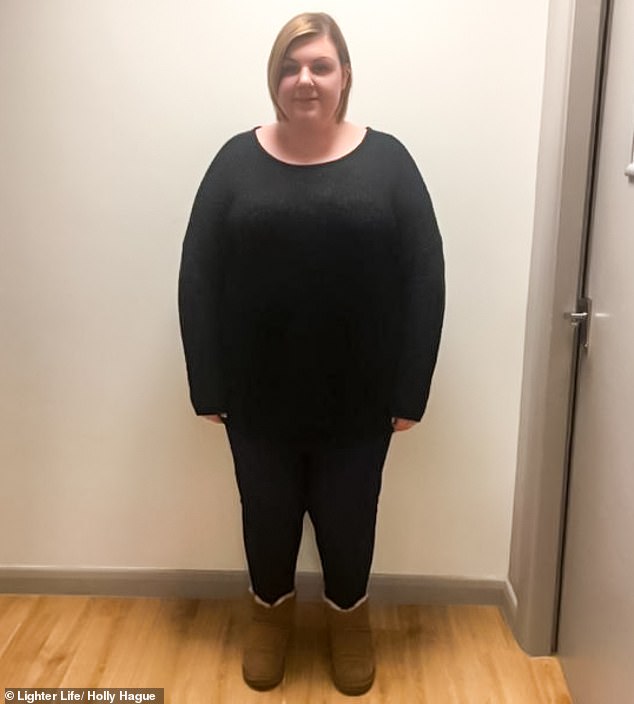 Holly (pictured before, January 2018) spent years comfort eating as a way of dealing with cruel remarks after growing up as larger than her fellow classmates 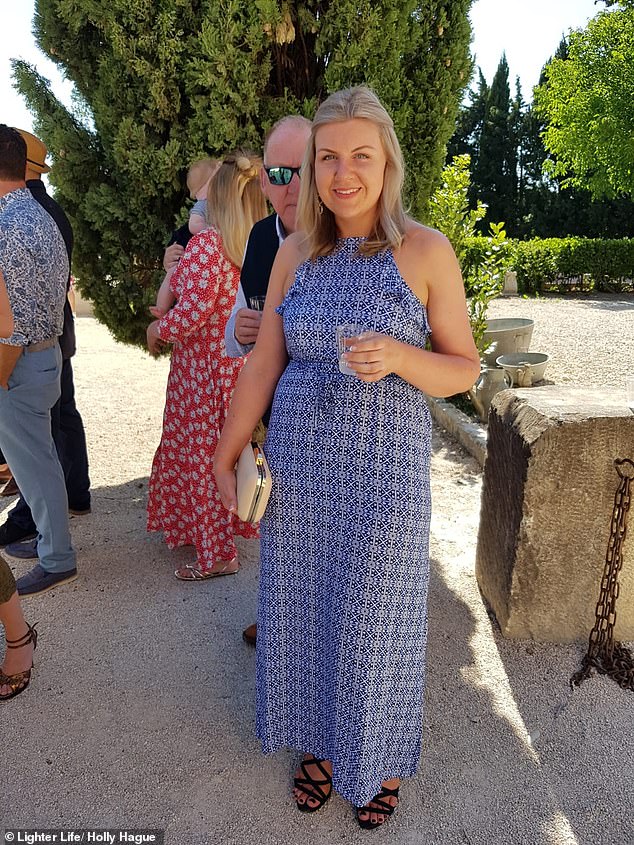 She said: ‘I know this is cliché but at the end of 2017 I was in the mindset of ‘new year new me’ and I knew I wanted fast weight loss that really would change my eating habits for good.

‘I spent my childhood being chunkier than others in my class and far too many years comfort eating to drown out the mean remarks. It was time I found my self-worth.

‘The LighterLife Total Plan was perfect for me because it took food out of the equation; I didn’t have to obsess or worry over the number of calories or if I’d unknowingly eaten the wrong thing.

‘Each day I’d have a choice of four given products which were around 800 kcal: breakfast was a Vanilla Shake with coffee, Chocolate Raisin Bar for lunch, followed by a Chicken Noodle FastPot for dinner and a Toffee Bar.

‘My local group was in Sheffield and I just loved spending an hour a week focusing on my goals, both with weight loss and in life.

‘My Counsellor, Suzanne, has been fantastic; every time I see her it’s like catching up with an old friend who supports and inspires you. In our group sessions each week we focus on a new topic which uses cognitive behavioural therapy (CBT) to challenge our thinking and attitudes towards eating. 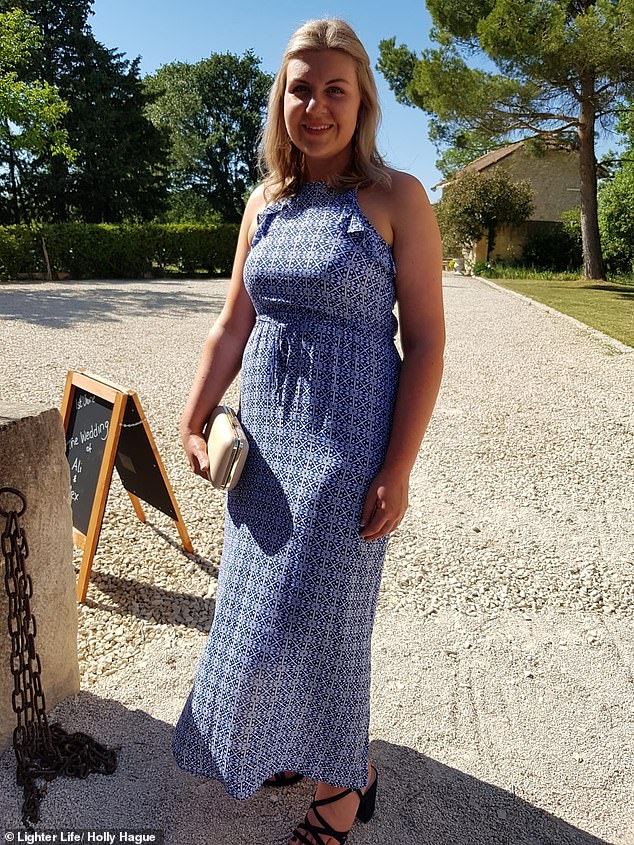 Since losing almost 10st I feel like a totally different person both physically and mentally. Of course, from the outside I’m almost unrecognisable but the biggest change is how I feel about myself and the world around me.

‘I grew up having social anxiety because of my weight, I constantly felt ugly and that everyone was staring at me because of my size. But now, a size 10, I’m embracing the stares because I’m so proud of what I’ve achieved in ten months. People can’t believe it’s me!

‘A few months into being on LighterLife I met my now boyfriend, Leon. It’s crazy to think but since we’ve been together I’ve lost an incredible 7st.

‘He’s literally seen me shrink in front of his eyes! Leon has been a massive support to me on this journey and he’s never once tried to derail my weight loss – it was worth waiting for our first official meal for two!

‘This year my mum and I are planning to do a zip wire over a quarry in Wales to celebrate our weight-loss success. She’s been losing weight for the last few years and it’s wonderful that we’ve reached goal at the same time. Last month (June 2019) we went to an amazing wedding in France and we both felt amazing in our outfits knowing what we’ve achieved.

‘The diet plan has given me the tools to keep the weight off and a safe place where I can always get support. This past year I’ve found this enjoyment for exercise which I never imagined I’d have, so I’ll be keeping up my gym membership into 2020!’ 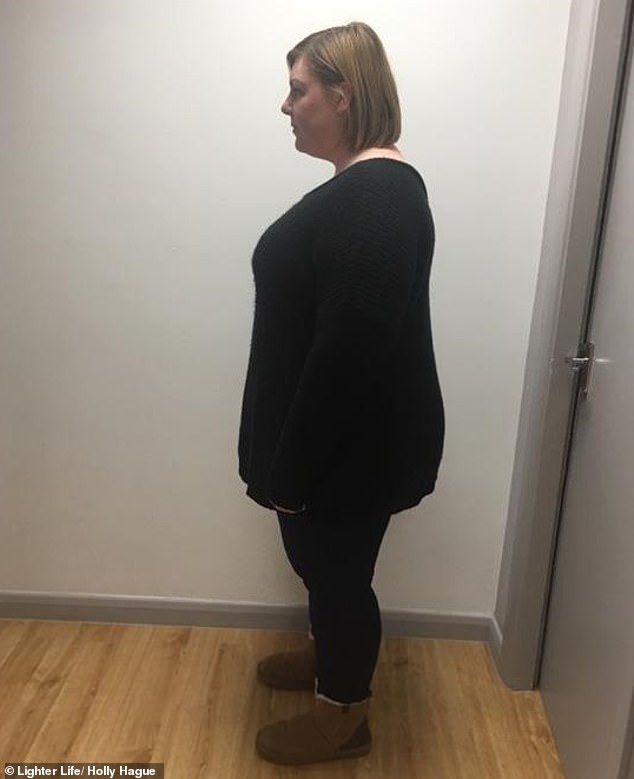 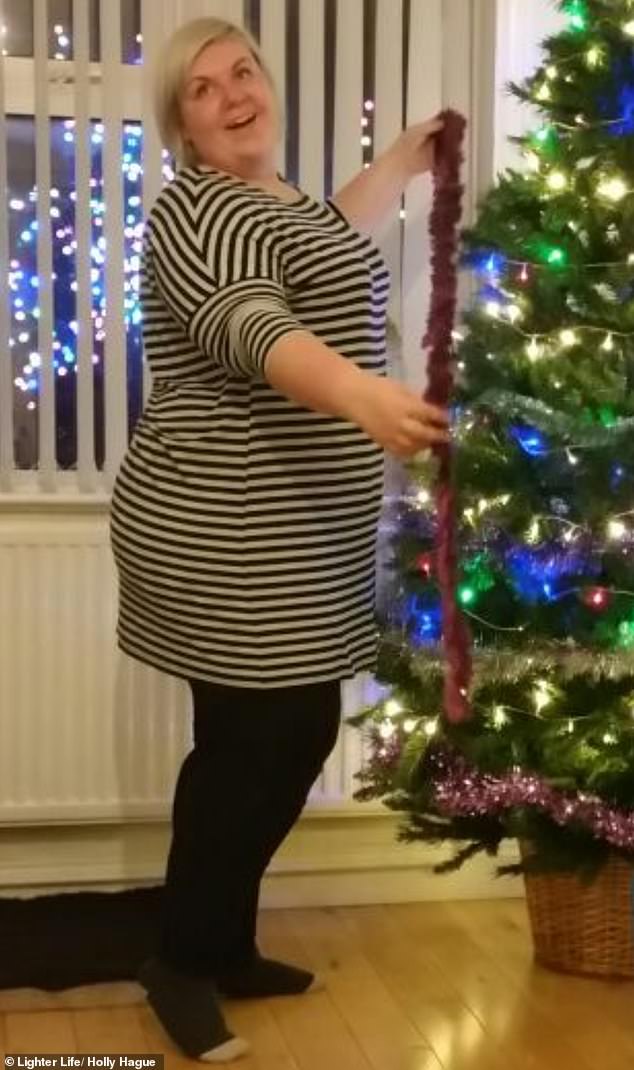 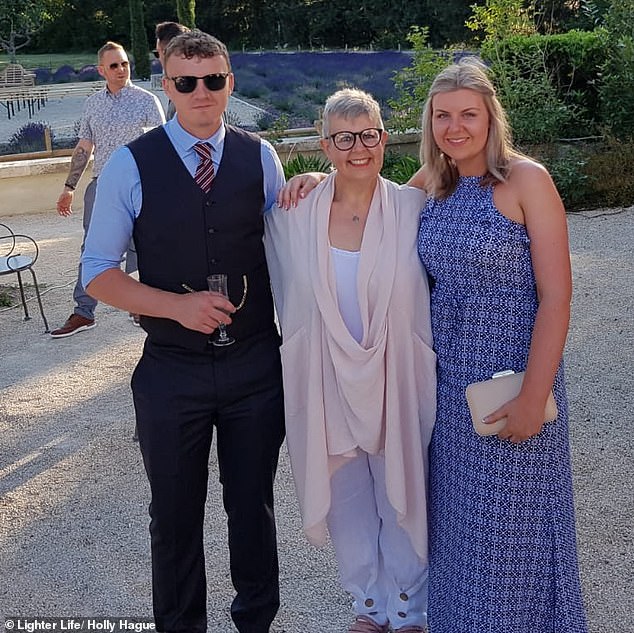