At 17, Lauren Erdmann Marler knew she had cancer.

Growing up in Midland, Texas, Lauren had never been to an oncologist, never had genetic testing, but she knew, ‘in her bones.’

For the past two years of her young life Lauren had been bleeding when she went to the bathroom. The blood in the toilet was scary but, at 15, she was too embarrassed to mention it to her parents, or anyone.

Finally, the then-17-year-old wrote a letter to her mother, Lori Erdmann.

When she read it, Lori assured her daughter that she wasn’t dying, that it wasn’t cancer.

And if Lori had had just about any other daughter, she would have been right.

But Lauren did have cancer – the first of four she would battle over the coming decade.

Due to a rare twist of genetic fate, Lauren has fought – and beaten – colon cancer (twice), uterine cancer and lymphoma, all before the age of 28.

Since their daughter, Lauren (center), was 17, Early (left) and Lori (right) Erdmann have watched their child battle four bouts of cancer, including lymphoma two years ago (pictured)

When the blood started appearing in Lauren’s stool, she didn’t yet know how different her genes made her from any other teenager, and her response to the sight was what any girl her age’s would have been.

‘I was so young, and embarrassed, I didn’t even know how to process it. I was so freaked out by the situation, but, I thought, “this is gross.” I was fifteen,’ she says.

But once intense stomach pains began to accompany the bleeding, Lauren did her own research, Googling her symptoms and ‘self-diagnosed it.’

‘When I saw colon cancer, I thought, oh my gosh, I’m probably dying.’

The odds that Lauren was right were miniscule. Colon cancer only strikes about three out of every 15 million children. To put that in perspective, a little less than four million babies are born in the US each year.

She worked up the courage to tell her mother, Lori Erdmann, what she thought she had, but only through a letter.

Lauren’s mother told her terrified daughter that she wasn’t dying but agreed a doctor’s appointment was in order.

Glamour shots: Lauren was first diagnosed with colon cancer at juts 17 (left). Almost one decade, four cancers and intensive treatments later, she is poster girl for the cancer center in Houston, Texas where she was treated (right)

The doctor, too, was sure Lauren’s bleeding and discomfort were probably just a consequence of constipation – nothing some dietary tweaks couldn’t take care of.

They put her on a high-fiber diet, but almost immediately Lauren was in even more pain than she’d been to begin with. After suffering for a month, she went back to the doctor, who agreed, she needed more tests.

On the way to her first endoscopy, Lauren told her mother, ‘”I know you don’t want to think about it,” but I had a gut feeling that it was the worst case scenario. I told her, “I feel in my bones that something’s wrong with me.’

It would be the last hour that Lori could tell her daughter it wasn’t true.

‘When I woke up from the procedure, my mom was just pale,’ Lauren recalls.

‘She wasn’t speaking to me and she looked like she’d seen a ghost.’

The doctor that had performed the endoscopy broke the news. Lauren’s colon was riddled with polyps, abnormal clusters of cells that can be cancerous. Lauren’s were.

‘The lady that did the scope was in tears. I live in Midland, Texas, it’s a small town. She said, “I don’t know what to say to you, just go to MD Anderson [Cancer Center],’ Lauren says.

Her colon cancer was quickly diagnosed, and she was scheduled for surgery. In early January, surgeons would remove Lauren’s entire colon and most of her rectum – the month after she finished high school (six months early) and two months after her eighteenth birthday. 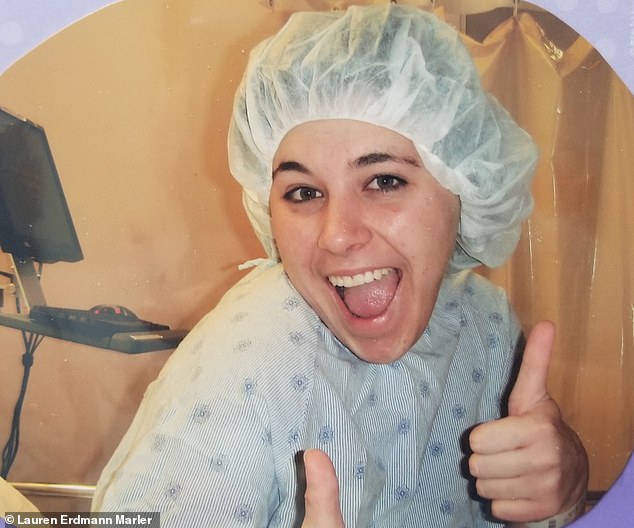 Diagnosed in her senior year, Lauren’s first cancer surgery to remove her colon took place just a month after she graduated high school and a couple months after her 18th birthday 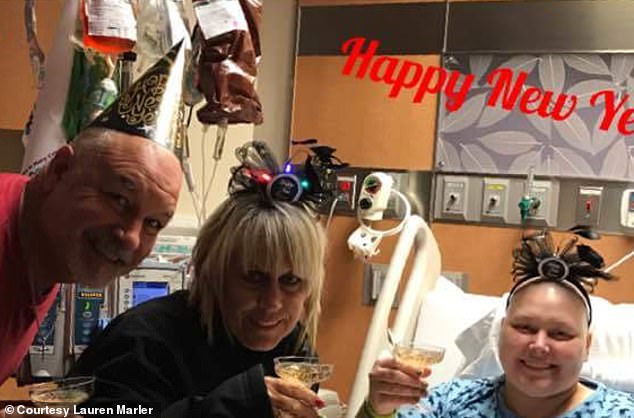 The Erdmann family spent New Year’s Eve of 2017 in the hospital where Lauren was undergoing her last treatment for her fourth cancer, lymphoma. She has been in remission since

The operation went well, and Lauren didn’t have to have chemotherapy treatment- though she did have an ileostomy bag for six months.

The bag was harder on Lauren’s mother than it was on Luaren.

‘My mom and dad have been a lot stronger than they thought they’d have to be,’ Lauren says.

‘When I had my ileostomy bag, my mom couldn’t believe how strong I was.’

But, long-term, surgeons made Lauren a J-pouch, an artificial digestive tract that allows food t pass through the inside of her abdomen.

The surgery was done, school (which Lauren had never enjoyed) was over, the cancer was and the bag were all gone. Lauren was 19 and free.

But only for nine months.

Lauren had a second colon cancer, in a lymph node in her lower abdomen. 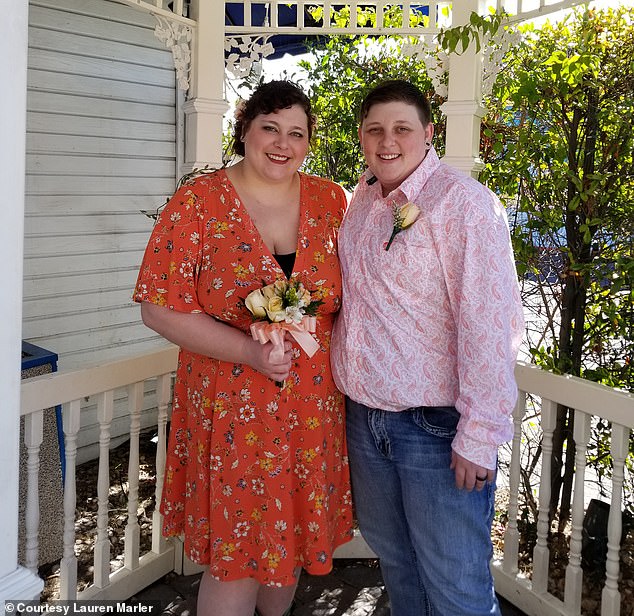 In 2017, Lauren got remarried to Katie Marler (right), who knows her wife suffers from a rare genetic condition that means cancer could strike at any moment

This time, Lauren had to undergo chemo to shrink the tumor before it doctors treated her with shielded radiation during surgery to remove the cancer.

‘It wasn’t too bad, though the surgery was kind of harsh because the have to cut you open from the chest all the way down,’ Lauren says.

When it was all said and done, Lauren was 19 and in remission for a second time.

Already, Lauren had experienced things many adults (including her parents) never had.

So perhaps it was fitting that she got married at 20, then bought her first house, then got divorced, and moved into the first apartment she’d lived in alone – all by the time she was 23.

After all that change, something familiar happened: cancer, this time of her uterus.

She wasted no time in following her doctors’ recommendations. Lauren had a full hysterectomy to remove her uterus, ovaries, and cervix.

At the time, 23-year-old hardly had the time or wherewithal all to think of what this meant for her future family. 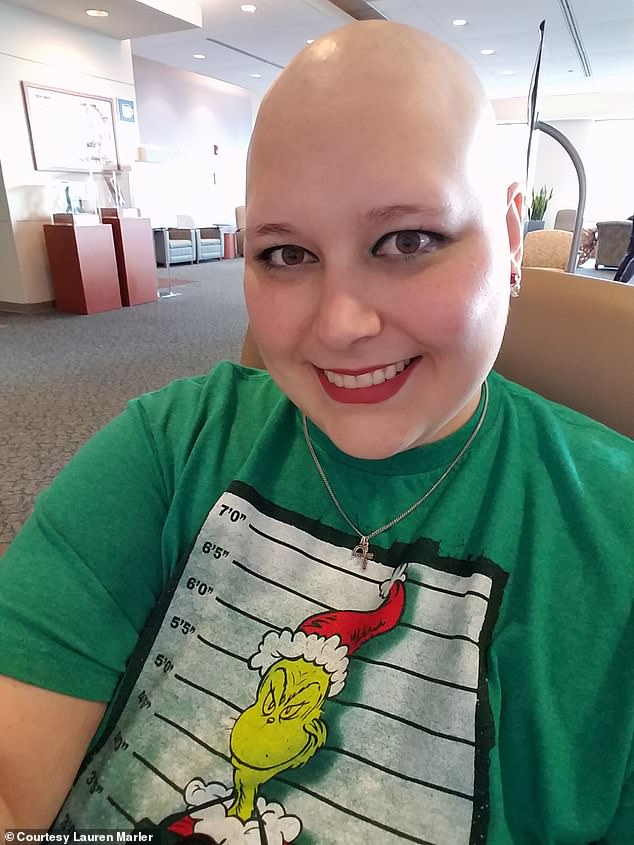 For her first three cancers, Lauren was treated either without chemotherapy or with milder cocktails of the drug. But to rid her body of lymphoma, she had to be treated with six much stronger chemos that made her hair fall out and left her unable to walk at times

‘It had always been an “I don’t know,” especially at that time,’ Lauren says.

‘I was freshly divorced, I wondered if I wanted to freeze my eggs, but with it being my third cancer I wasn’t going to risk it because obviously there was something going on with me.

Lauren laughs bittersweetly at that. ‘I just needed to be healthy.’

Again, the treatment worked, but Lauren and her doctors alike suspected that more was at play than horrible luck.

The genetic condition is extremely rare, but Lauren’s doctors wanted to test her for it.

At the time, less than 100 Americans had been diagnosed.

Just like the rest of our bodies, our genes get banged up and damaged throughout life, and that damage can lead to caner. But the vast majority of us also have two copies of a gene that codes for DNA repairs.

People with Lynch syndrome – about one in very three hundred of us – have just one copy of the mismatch repair gene, putting them at higher risks for certain cancers.

If two people with Lynch Syndrome happen to meet and have a child, each child has a one-in-four chance of having CMMRD. 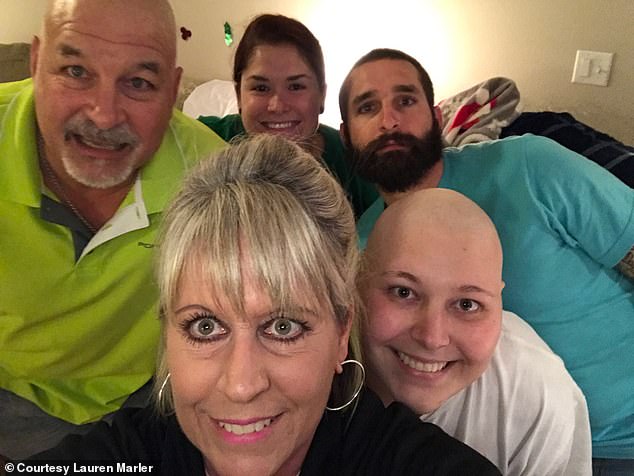 Lauren’s father, Earl, is protective and cautious about his daughter, worrying over Lauren (but not stopping her from going) when she travels with him, her mother Lori (center), brother, Justin (back right) and sister-in-law, Nebile (back center)

Lynch syndrome raises cancer risks by about 20 percent. Having CMMRD puts people at 16 times the risks of having cancers of the colon, rectum, uterus, brain, lymph system and blood.

‘Basically, it turns your genes into cancer,’ Lauren says.

‘I’m like, “oh so that’s great, nice to figure out what the heck is going on with my body,”‘ she adds, laughing.

‘But I have this horrible disease. And the best way to treat you is preventative care and to continue to monitor you. And if you get it, you treat it. You just keep moving forward and keep fighting.’

Lauren did get it – this time, the aggressive cancer, lymphoma.

The cancer was discovered after one of the routine scans Lauren must get every three months near her home in Midland. But it alarmed her medical team enough that she was med-evaced immediately back to MD Anderson in Houston, where she would live for the next six months. 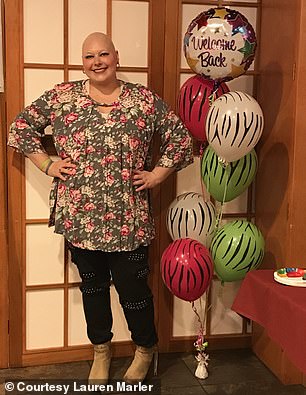 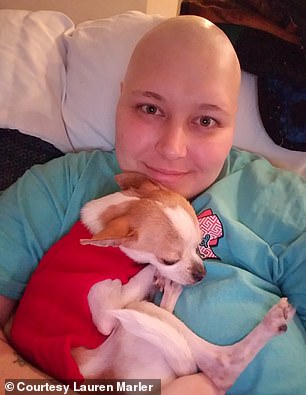 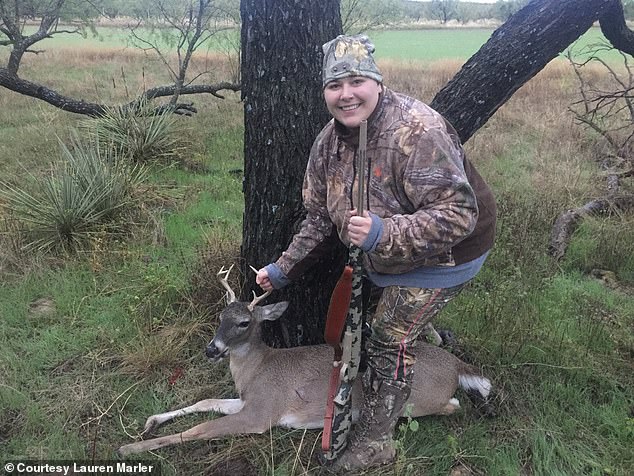 Despite the cloud of cancer risk she lives under, Lauren keeps a good attitude and a full life, working full time, spending time on her family’s ranch, hunting (pictured) and travelling

The large mass was pressing on her pancreas. It had to come out, but Lauren also needed to be treated with six different types of chemotherapy.

By this time, cancer was old hat for the 23-year-old, but the rigorous treatment was something new altogether.

She was put on six different treatments. One of them is infamously nicknamed ‘the red bag of death.’ Another is delivered via spinal tap.

‘The doctors told me that by the time I was done, I was going to hate them,’ Lauren says.

Her parents and her two Chihuahuas (the two bigger dogs had to stay behind) moved to Houston for the duration of her treatments, which she got every two weeks.

‘By the fourth treatment, I did hate them. I had blisters on my hands, my back ached, and I couldn’t walk. I was so mad,’ Lauren says.

Since January 2017, Lauren has been in remission. She has also remarried, to Katie Marler.

Lauren’s genetic condition means she – and her family – may always live with one eye on cancer scans, but she certainly lives.

‘We have the same four dogs, and I’m still chugging along,’ Lauren says.

She and Katie and her parents, brother, Justin, and sister-in-law, Nebile, spend their free time on the family’s ranch, hunting or taking cruises and traveling.

On the last cruise, Lauren fell down a staircase and broke a bone in her leg. And her father, Earl quickly put the kabash on her hopes to travel to Australia.

‘He tends to baby me a little and my wife has to step in and be like, “she’s fine, we got this,”‘ Lauren says, laughing.

And that, she says has been the key to getting through the last harrowing decade.

‘Laughter has gotten us through everything,’ she says.

‘And if I can, y’all can too,’ she says, in the hopes that others will have the courage to advocate for themselves and get checked for cancer – or any disease – as she’s done since she was just 15.