Woman, 33, reveals how she tricked her body into producing breast milk for her adopted baby

A mother-of-one who was desperate to breastfeed her adopted baby has revealed how she tricked her body into thinking it was pregnant with medication so she could produce her own milk.

Mira Gallaway, 33, and her husband David, from Alberta, Canada, had tried to conceive for five years without success. After two rounds of IVF and seven IUIs, Mira was left feeling like a ‘failure’.

When they signed up with adoption agencies, Mira, whose daughter Harper is now two, began researching how non-biological parents could bond with their newborn, and found breastfeeding advice by Canadian pediatrician Dr Jack Newman.

Incredible: Mira Gallaway, 33, has revealed how she managed to trick her body into producing breastmilk for her adopted baby, Harper Struggle: Mira and her husband, David (R), from Alberta, Canada, had tried to conceive for five years without any success. The couple also had two rounds of IVF and seven IUIs 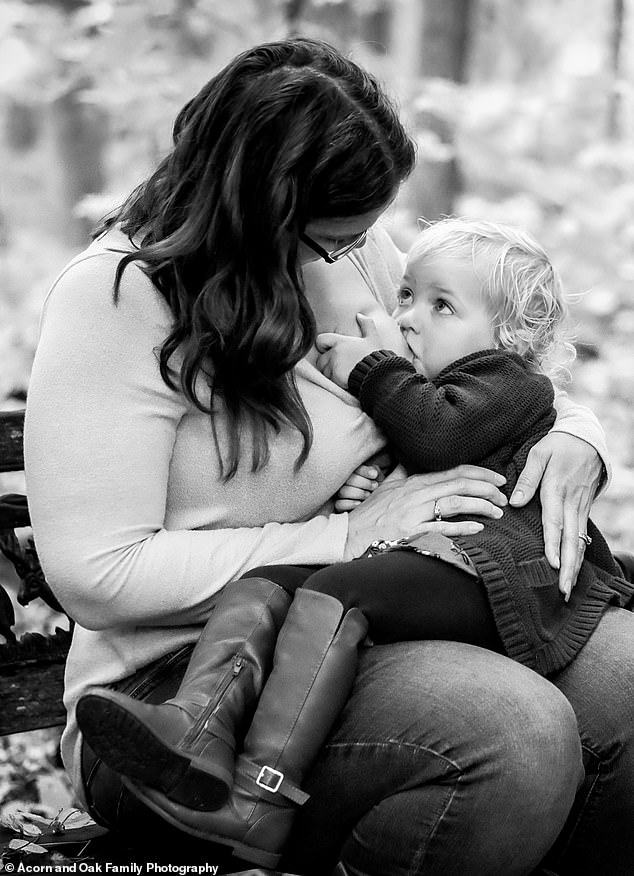 Journey: The couple eventually signed up with adoption agencies and Mira began researching how non-biological parents could bond with their newborn

He explained how by taking the contraceptive Pill alongside a drug called domperidone, it mimics the chemicals released into a woman’s body when she’s pregnant, and after stopping the medication, the body would lactate thinking it had given birth.

Mira, who had been breastfed by her mother until she was three, asked her doctor to prescribe the medication – including domperidone, which has been linked to fatal heart conditions according to Health Canada – and she began taking it for seven months. 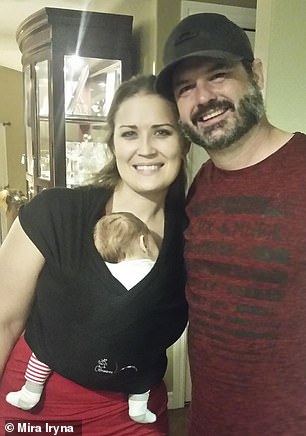 Learning: She consulted with pediatrician Dr Jack Newman, who explained the process of induced lactation – which tricks the body into thinking a woman has been pregnant and subsequently allows her to produce breastmilk

She stopped after seven months in June 2016, and began using a breast pump between six and eight times a day to remove milk and build up her supply.

By the time the couple went to meet Harper in October 2016, Mira was producing 30 ounces a day – and was able to feed their new arrival right away.

The process is called ‘induced lactation’ and there have been only 500 successful cases documented globally, according to the Canadian Breastfeeding Foundation.

Mira, who still breastfeeds Harper on demand, said: ‘I felt like for once my body was doing something that it should. That I couldn’t make a baby but I could feed one – it was a healing moment for me.

‘One of the hardest things about experiencing infertility was thinking that the opportunity to have that parenting tool was gone.

‘So when I learned that as a non-gestational parent I could breastfeed, it was reassuring that wasn’t a door that was shut anymore,’ she added.

Mira said she knew she and David, who has a grown-up son from his first marriage, were going to have to ‘do something in order to have kids together’, as her husband had undergone a vasectomy.

He had a reversal but it was unsuccessful and David tested negative for sperm analysis afterwards. So the couple moved on to IVF – the process of fertilization by extracting eggs, retrieving a sperm sample, and then manually combining the egg with the sperm in a laboratory dish – as a result. 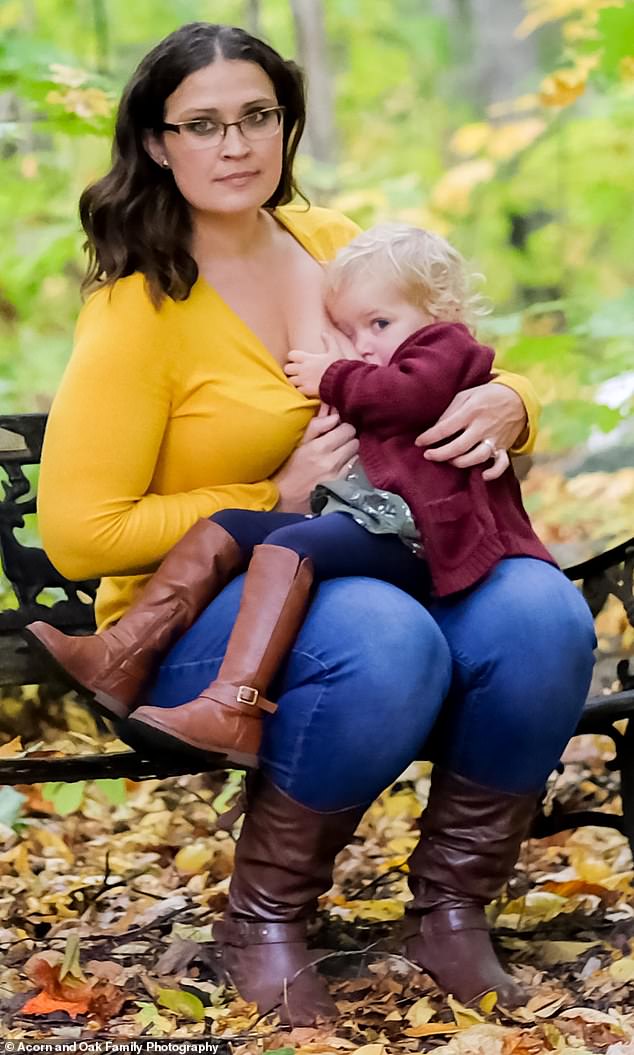 Incredible: The process saw Mira (seen feeding Harper) taking the contraceptive Pill alongside a drug called domperidone, which mimics the chemicals in a woman’s body when pregnant Results: She stopped taking the medication after seven months, and then began using a breast pump between six and eight times a day to remove milk and build up her supply 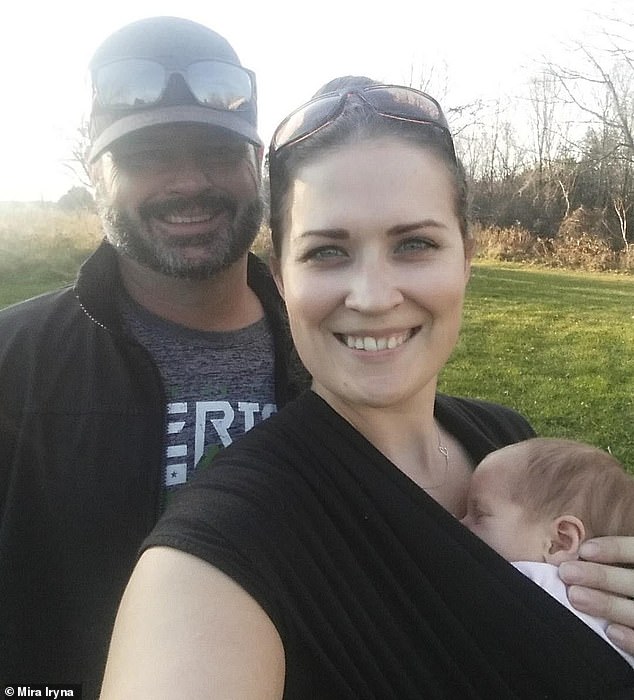 Amazing: By the time the couple adopted Mira from an expectant mother who had picked them in October 2016, Mira was producing around 30 ounces of breast milk every day

Mira said they were ‘overly confident’, adding: ‘The doctors saw a 26-year-old who was regular with her cycles and I think everyone went into it with a bit more confidence than what we should have’.

She said: ‘I’d always wanted to be a mom, I’d always dreamed of having a big family. And it was like every single time we did something we were another step away from being told no. Excitement: The happy couple made an eight-hour journey to be at the hospital when Harper (pictured recently) was born

‘It just felt so desperate. And I felt so cheated – I’d done all my research; I knew what kind of parent I wanted to be. It was something I wanted so bad; and all of my friends were working on their families and getting pregnant.

‘It just seemed like it didn’t matter, for whatever reason, I wasn’t allowed to be a mom,’ she added.

After two rounds of IVF that were unsuccessful, Mira was contacted by her fertility clinic and was told there were frozen embryos close to their storage expiry date. They underwent a third round of IVF using donor eggs.

‘That’s when our doctor said ‘I don’t think you can carry a child’,’ she said.

‘When we were driving home, I said to my husband, “I know we said we were done but I’m not ready to say that I’m not going to be a mom”.

‘He said “I will do whatever you want to do”.

So the couple looked into adoption in their then hometown of Ontario, and decided to opt for a private agency.

In November 2015, they went through the ‘adopt ready’ system, which checked everything from child safety in the couple’s home, to their family history.

That’s also when Mira started the process to induce lactation. She printed off the protocol and took it to her doctor, who was pro-breastfeeding. 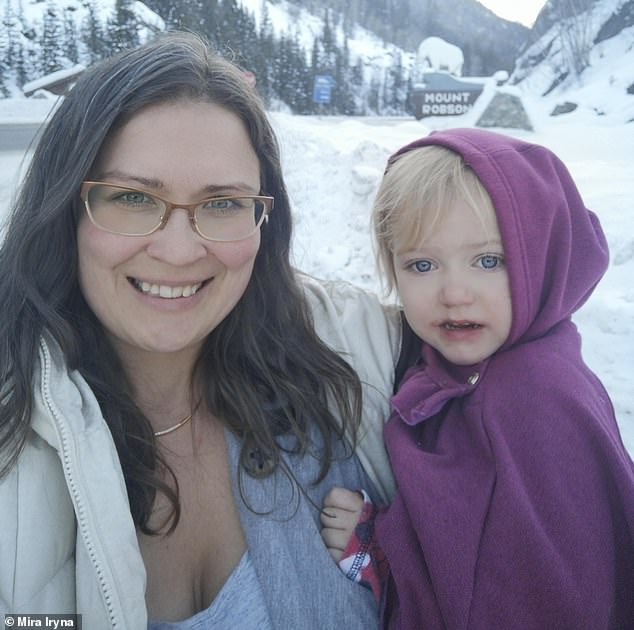 Success: The biological mother was keen for Mira to have skin-to-skin with Harper and to feed her as soon as possible, so she began breastfeeding her just 30 minutes after she was born Growth: The two-year-old (pictured as a newborn) has met all of her weight and height-gain milestones, as well as her developmental milestones

‘He asked me how long I wanted to do it for and wrote me a prescription for that amount of time,’ she said.

Mira pumped up to eight times a day – even at work at a high-end building supplier, where she was given one of her bosses’ offices to use.

‘It was kind of the first time I felt really good about it all. For one I was super successful with it, I felt like I was doing something with my time waiting,’ she said.

In October 2016, Mira received a call from an agency, and they were presented to an expectant mother who had picked them – and she was told she was due in ten days.

They made the eight-hour journey to be at the hospital when Harper was born. The biological mother was keen for Mira to have skin-to-skin with Harper and to feed her as soon as possible.

Thirty minutes after she was born, Harper latched on to Mira’s breast and fed.

Two-and-a-half years later, and Mira is still breastfeeding. Harper has met all her weight and height-gain milestones as well as developmental ones.

‘I’m so grateful that I had the opportunity to breastfeed. I’ve always felt that breastmilk is the normal biological food for babies, so to be able to provide that to her where in another time it may not have been an option for her is really exciting,’ Mira said.

‘I was always going to give her breastmilk and would have used donor milk, I’m just really lucky that it was mine.’ Grateful: ‘I’m so grateful that I had the opportunity to breastfeed,’ Mira, who still continues to  breastfeed her daughter two years later, said of the experience Happy: ‘I was always going to give her breastmilk and would have used donor milk, I’m just really lucky that it was mine,’ the mother-of-one added

Dr Jack Newman, a Toronto physician specializing in breastfeeding support and advocacy, said in an email: ‘The person inducing lactation should be on the combination birth control pill for at least 16 weeks and continue it until about six to eight weeks before the baby is born and then stop the combination pill completely.

‘Domperidone increases the prolactin levels in the person inducing lactation and we recommend continuing the domperidone at least until the baby is born and even after that.

‘Indeed, it is likely the domperidone will need to be continued for the entire period of breastfeeding.

Newman is not without his critics, he himself has admitted he is a thorn in the side of hospitals for being outspoken about ‘how poorly we treat mothers.’

He has also been criticized for his stance against using formula to supplement a mother’s milk.

He clarified that he’s not always against formula.

‘If it’s necessary, I recommend it. What those who criticize me don’t understand is that there is much more that can be done when the baby is not gaining well than to recommend formula,’ he said.

However, the physician, who has 30 years’ experience and who previously admitted he is a ‘thorn in the side’ of hospitals for being ‘outspoken’ about how ‘poorly we treat mothers’, is not without his critics.

His hospital clinic at Toronto North York General was closed 2018, along with two others that were shut between 2016/7.