At 33 years old, Diana Zepeda was a fairly typical Washington, DC resident: working long hours in a stressful job, eating whatever was available when she had a minute to spare, past the invincibility of her 20s, and feeling the physical consequences.

Her friends, too, were developing one food intolerance after another, so between her lifestyle and stress levels, it seemed reasonable that Zepeda’s stomach started acting up.

Now, six months later, Zepeda has had radiation, chemotherapy and a sizable portion of her digestive system removed.

She is one of an alarming and growing number of young people developing the disease, which was once thought to be an illness of older people only.

Zepeda endured relatively mild symptoms like bouts of diarrhea for two years, blaming her own diet before going to a doctor.

Now, at the end of six months of chemotherapy, she warns that early action might have saved her from several invasive surgeries and the partial loss of several organs.

Diana Zepeda, 33, celebrated the last of her six months of chemotherapy treatment for stage 4 colon cancer in an elegant gown yesterday

Zepeda has a bright smile, a slim physique and a scar from a chemotherapy port on her chest.

Working in the competitive finance industry in Washington DC, Zepeda was active, exercised a couple times a week, and was healthy overall.

But she also put in long hours at her job, so lunch was a grab-and-go affair, and dinner often consisted of whatever take out place was still open when she got off of work.

Over course of two years, bouts of diarrhea seemed to interrupt her days more and more frequently and she started racking up sick days from work. She was also travelling for work, frequently stressed out, and no longer 25.

‘I figured I’m not in my 20s any more, I can’t just eat whatever I want without consequences and this is my new normal,’ Zepeda says.

Then in February of 2017, she noticed that there was blood in her stool. That was new, and troubling.

‘I Googled all my symptoms, but diarrhea is such a common symptom of so many things – I thought maybe it was an ulcer, hemmorhoids, an allergy – but cancer was definitely not on my radar,’ Zepeda says.

For a month once the holidays were over in 2017, she cut out all of the usual suspects from her diet. No more sugar, dairy or grains.

But nothing changed. If anything, her symptoms got worse.

Like nine out of 10 millennials, Zepeda avoided going to the doctor unless it was absolutely necessary, and did not have a regular primary care physician.

Plus, as a transplant to the DC-area, she did not have a good referral and ‘bathroom issues are really embarrassing. I had no idea what tests GI doctors were going to do, but I was already pretty mortified,’ Zepeda says. 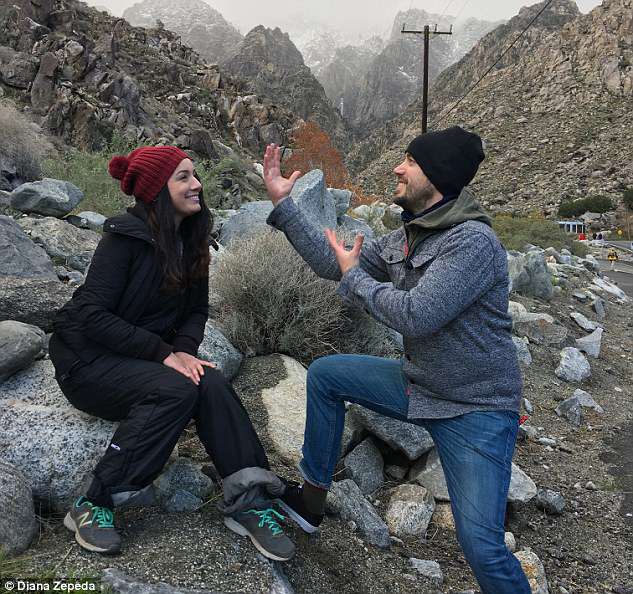 Zepeda’s symptoms started in 2016, and she remembers having stomach pain and diarrhea while hiking with her husband Alexander Sweeney (right)

But she faced her fears and went online to hunt for a gastroenterologist. Zepeda wanted to make sure she saw the right person.

Dr Jessica Korman was female, came highly-recommended and had a two-month waitlist for an appointment for a new patient. She matched two out of three of Zepeda’s criteria, so she booked an appointment and waited out.

At Dr Korman’s office, Zepeda’s exam was nothing out of the ordinary. Blood tests confirmed what the doctor suspected: Zepeda had E. coli, just a common stomach bug that would be easily knocked out with a five-day course of antibiotics, Dr Korman assured her.

But the treatment only seemed to make Zepeda sicker. Concerned, her doctor booked Zepeda for a colonoscopy.

Those without a family history of colorectal cancers are supposed to start getting colonoscopies at age 50. If someone in your family got it before 60, the American Cancer Society suggests you want to start getting the rather unpleasant diagnostic procedure done earlier.

Zepeda was 15 years too young for a colonoscopy and had no family history, but she started preparing for it.

‘I was scared, I was embarrassed, I was dreading it. I didn’t know what to expect because that’s not on my radar at this age, so it sounded a bit overboard,’ she says.

She tried to drink the 64 ounces liquid meant to make her purge everything in her gastrointestinal system. That was about the only thing that did not happen to her gut.

‘I had a really strong reaction where I had extreme abdominal pain, a lot of vomiting and the laxative didn’t have any effect,’ Zepeda remembers. 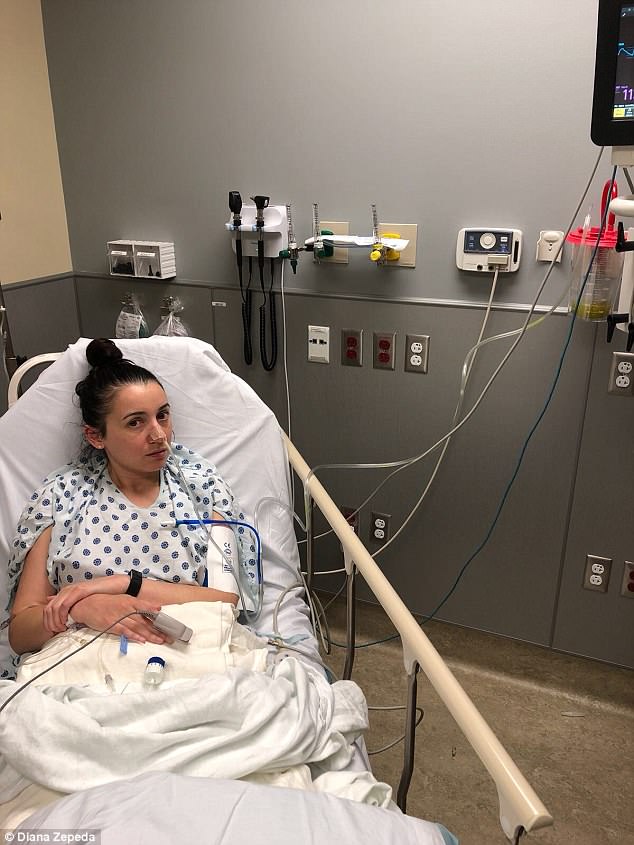 Last year, Zepeda had to have surgery to remove a portion of her colon and liver, gall bladder, appendix and several lymph nodes in order to rid her of cancer 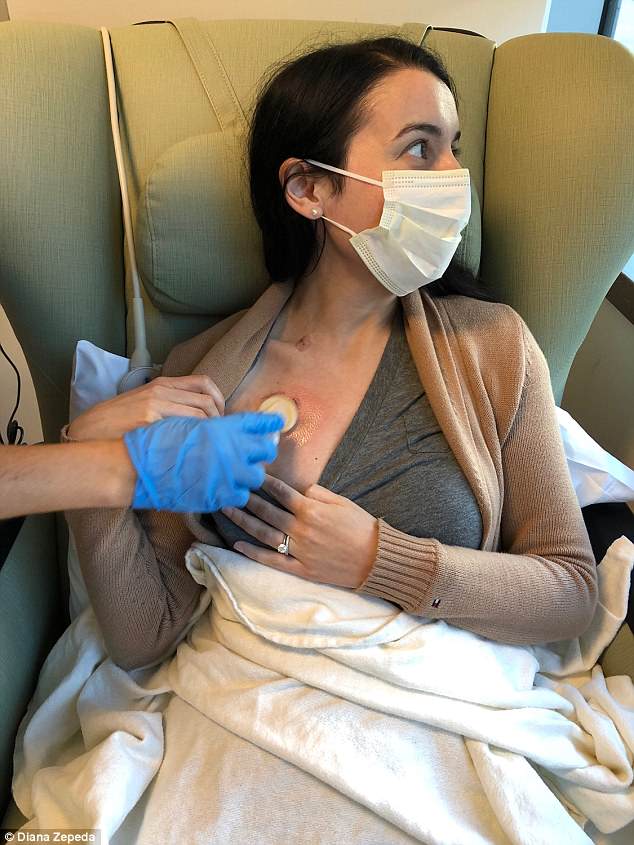 Her husband, Alexander Sweeney, rushed Zepeda to the emergency room. They gave her fluids and medication for her pain, but ‘even though they knew I was prepping for a colonoscopy – this makes me angry looking back – they said they weren’t going to do any scans on my abdomen because I’m a young woman of reproductive age,’ Zepeda says.

The doctors at the ER were concerned that radiation from a CT scan could harm Zepeda’s fertility, and likely thought that, at her age, the odds that Zepeda had a severe gastrointestinal problem were too slim to make a scan worth the risks to her reproductive health.

Even though she could not complete the prep, her GI told her to come in for a partial colonoscopy the next day.

That was all it took to find a golf ball-sized tumor. The growth had probably been blocking her gastrointestinal track, stopping the laxative from working the previous night.

When she awoke from the procedure, Zepeda dressed and went to meet Dr Korman.

‘She asked me to see her in the little office room and my husband was waiting there, and I knew right away that was bad news, kind of like being called into the principal’s office,’ Zepeda recalls.

Zepeda was diagnosed with stage four colon cancer, one month from her first appointment with Dr Korman.

‘Now I realize how lucky I am that she went that step, [to ordering a colonoscopy], because otherwise she could’ve just kicked the ball down the road and diagnosed me with IBS like everybody else,’ Zepeda says.

Some 85 percent of people under 50 who have the disease are misdiagnosed, many of them for years, according to Michael Sapienza, a spokesperson for the Colorectal Cancer Alliance.

And it’s happening more often than ever before.

‘If you are under 50, you have more than double the risk of colon cancer than you did in 1990, and your risks of rectal cancer are four times what they were in 1990,’ says Sapienza.

Although this steep increase has now been widely reported, it’s not just patients who are in disbelief. Though Zepeda’s doctor did not hesitate to order a colonoscopy, many primary care physicians are too slow to recommend such an invasive diagnostic test, Sapienza says. 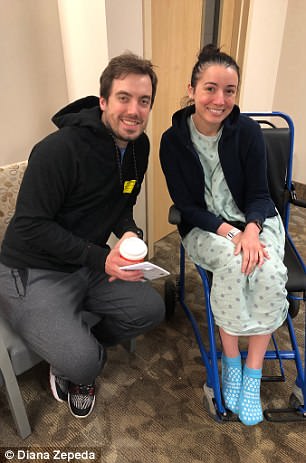 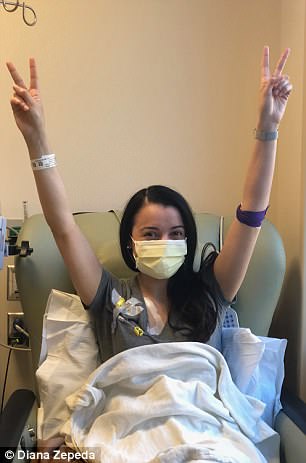 Zepeda and her husband, Alexander Sweeney (left) have spent much of the last year at the hospital as she has undergone chemotherapy. Zepeda has stayed positive, celebrating milestones, like the halfway point in her treatment (right)

More times than not, even something as alarming as blood in the stool or rectal bleeding does not signify something so serious as cancer, ‘so we don’t want to scare people,’ he adds.

‘But we have to be our own advocates and not be scared to stand up to a GI or general physician and say, “no, I really need to have a colonoscopy, I really want to find out what’s happening now, this not normal,”’ Sapienza says.

Unfortunately, even if patients find out what is going on, we don’t yet know why.

‘I talk to my oncologist all the time, and ask him “how did this happen, can you please tell me how I got this so I can avoid doing or eating whatever caused this?”‘ says Zepeda.

But a disturbing common thread between young colorectal cancer patients is that – unlike older ones – they tend to be otherwise healthy, active and have good diets.

The leading theories right now suggest that environmental and dietary factors could be driving the rise, or that people’s microbiomes have been thrown out of whack by changing hygiene practices, according to Sapienza.

‘If I’d gone to the doctor six months earlier, maybe I wouldn’t have been at stage four,’ says Zepeda, that doesn’t mean she wouldn’t have gotten the cancer to begin with. 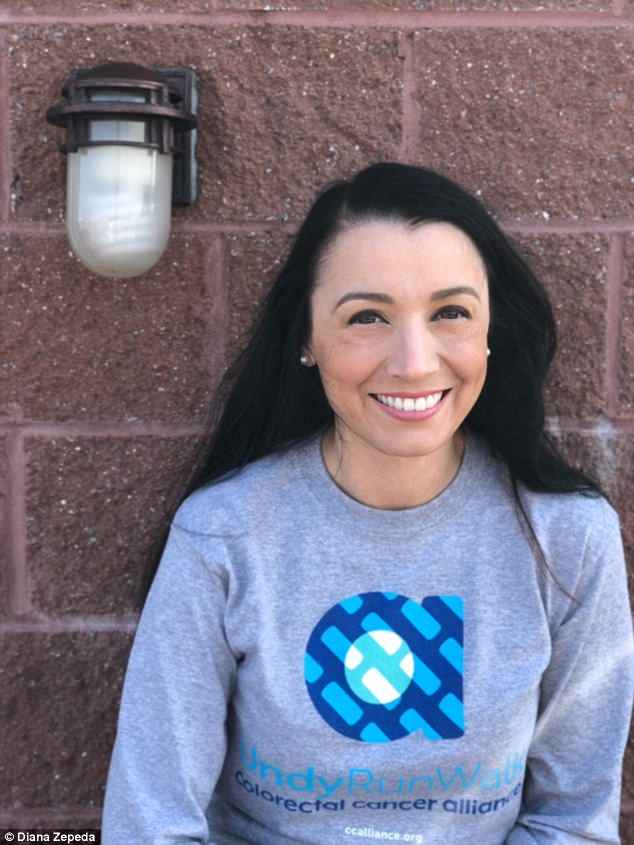 Though she was at first embarrassed of her symptoms, Zepeda has become an outspoken advocate for colorectal cancer screening

To treat her disease, Zepeda had to have a short course of radiation to shrink the tumor as much as possible before undergoing surgery to cut away the affected tissue.

Surgeons removed a foot and a half of her colon, her gall bladder, appendix, several lymph nodes and 75 percent of her liver (‘but it grows back, isn’t that crazy?!’ Zepeda marvels).

Just before the operation, her doctors ‘squeezed in’ a procedure to move her ovaries out of the way of the radiation and just before chemo they harvested eggs from her.

After the operation, Zepeda was weak, but ‘I knew that every day thereafter would be better because my body was healing, so I was able to cope pretty well,’ she says.

With chemo on the other hand, ‘they warn you that the effects are cumulative and it’s only going to get worse.

‘I would stay up every night Googling, “how do you quit chemo?”‘ Zepeda says.

But ultimately, she buckled down to get through it as fast as possible. She stayed indoors and away from family and friends, but, yesterday, her husband accompanied her to her final chemo treatment.

‘We dressed up to celebrate! My original plan was to dress up like the red dancing emoji lady, but I didn’t find a red gown in time,’ says Zepeda, who still looked elegant reclining in her black gown at the hospital. 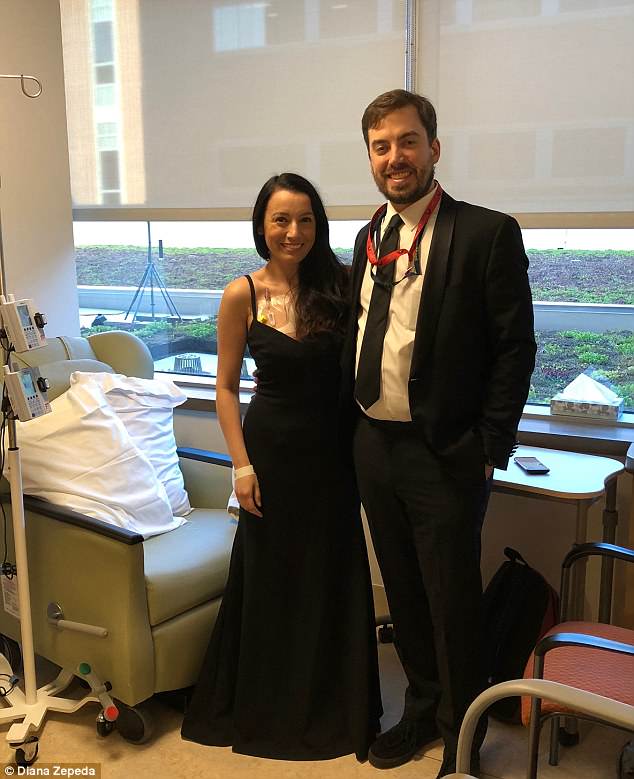 ‘I’m a little paranoid about celebrating too soon and jinxing myself, but you have to make events out of these milestones, right?’ she says.

In a month, she will have surgery to reverse the ileostomy that circumvents her small intestine, which Zepeda says she is ‘dreading, but I’m very excited for this part of my life to be over.’

For the next two years, Zepeda will have to have scans every three months to check for any tumor recurrence, but she is optimistic.

‘I’m hoping to not fall apart every three months before I get the answer. I’m just going to think positive,’ she says.

‘If I’d gone to doctor six months earlier, maybe I wouldn’t have gotten to stage four and my story would be different, but there’s really nothing I can do now besides advocate,’ says Zepeda.

‘It’s not that I blame the internet, but I thought I was so well-educated’ from everything she had read on her symptoms.

‘But there’s really no substitution for medical advice and I hope that everyone take their symptoms seriously,’ and seeks diagnosis and treatment, she says.