Woman, 36, reveals she sits UNDER her desk to escape ‘overstimulation’

A woman has gone viral on LinkedIn after sharing that she sits under her desk to work when she is struggling with ‘overstimulation’.

Minnie Katzen Mayer, 36, who is from Israel but studied at the University of Massachusetts Boston, opened up about how she escapes distractions in her office on the professional online network last week while sharing a photo of herself underneath her desk with her laptop.

‘Whenever I do this at work, I get weird looks,’ she wrote. ‘I mean, I get it: I’m 36, a fully grown adult, with a perfectly adequate ergonomic desk chair, sitting under my standing desk.’

Minnie Katzen Mayer, 36, from Israel, shared on LinkedIn that she sits under her desk to work when she is struggling with overstimulation 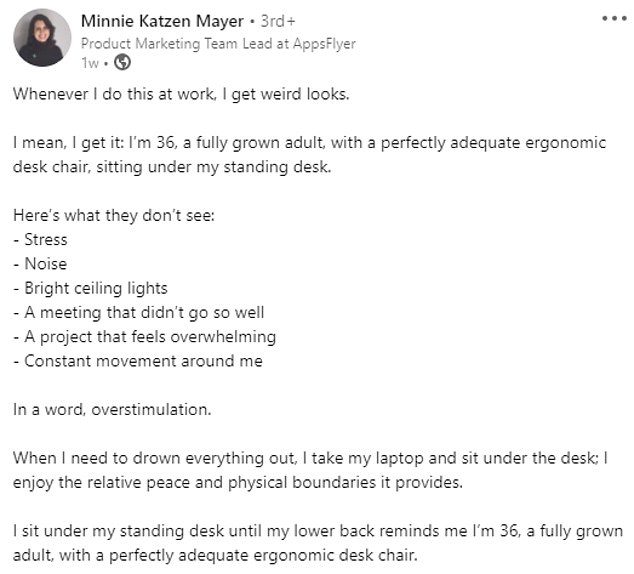 She explained in her candid post that stress, noise, bright ceiling lights, or constant movement around her are all things that lead to her needing a break from her environment

Katzen Mayer, who works in product marketing, explained that her co-workers don’t see that she is struggling with overstimulation when she retreats underneath her desk with her laptop.

Stress, noise, bright ceiling lights, a meeting that didn’t go well, a project that feels overwhelming, or constant movement around her are all things that lead to her needing a break from her environment.

‘When I need to drown everything out, I take my laptop and sit under the desk; I enjoy the relative peace and physical boundaries it provides,’ she said.

‘I sit under my standing desk until my lower back reminds me I’m 36, a fully grown adult, with a perfectly adequate ergonomic desk chair.’

Katzen Mayer’s story struck a chord with a number of people who struggle with open office floor plans, especially after working from home during the pandemic.

Katzen Mayer’s story struck a chord with a number of people who struggle with open office plans, especially after working from home during the pandemic

More than 120,000 people have reacted to her post, which has inspired thousands of comments, many of which were supportive.

‘This is totally understandable: it’s very related to “I want to go in the office after 2 years of wfh,”‘ one person commented. ‘People have phases, and need silence and quite as well as stimulation and noise to find the balance they need to work in their optimal window.’

‘I love this. As someone who is neurodivergent, it’s hard to express what can happen when I get overstimulated,’ someone else shared. ‘These open floor plan concepts are great in theory, but not for everyone. I was in the office just yesterday and was so distracted by every single noise that was happening around me.’

Another added: ‘I’ve never thought of this. I’ve always struggled in open office settings. The visual noise is the worst not to mention all the auditory noise. If I ever have to go back in I may try this arrangement.’

Despite the support, there were also some critics who felt the need to mock how Katzen Mayer deals with overstimulation at work. 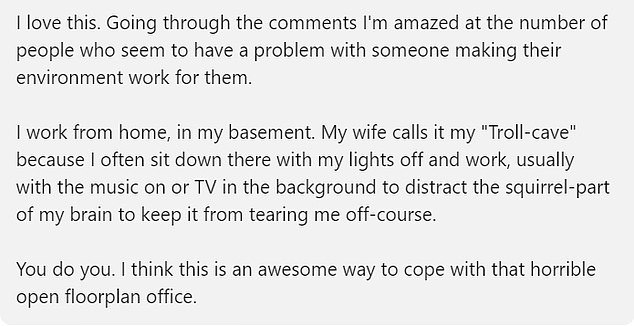 There were also some critics who felt the need to mock how Katzen Mayer deals with overstimulation at work, which led people to leap to her defense

‘Nothing more mature than hiding from your problems under the table,’ one person commented, prompting a number of people to leap to her defense.

‘Nothing more ignorant than a man telling a woman how she is allowed to cope when her world gets to be too much,’ one LinkedIn user responded, while another added: ‘She is not hiding. She is recentering & refocusing herself. You can’t teach empathy.’ 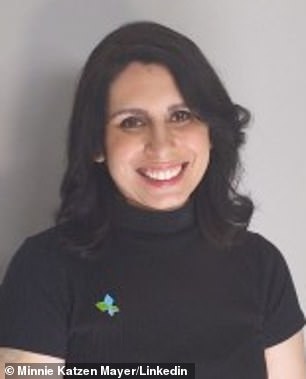 ‘Or maybe, people are different, and have different ways to cope with stress,’ someone else pointed out. ‘Open plan offices are productively poison. I’m wondering how many people here casting shade probably drink too much.’

Katzen Mayer spoke with BuzzFeed after her post went viral, saying she is ‘truly humbled by the massive response’ to how she copes with stress and overstimulation at work.

‘The first time I [sat under my desk], I really just needed a few minutes on my own to think and strategize for a big oncoming change,’ she recalled. ‘I had the overwhelming sensation that taking a few moments to sit under my desk would help me get my thoughts in order. It did, and 10 minutes later I got up feeling reenergized and focused.’

Katzen Mayer said she is ‘very well supported’ by her employer and thinks it’s important for people to be able to choose the work environment that works best for them.

‘No one has ever said anything negative,’ she said of her co-workers. ‘I’ve gotten some curious looks and a couple of playful questions. My friends now recognize it for what it is, and occasionally ask to join me or if I need anything.’