Woman, 37, can rotate her shoulder 180 degrees after bones in her joint ‘VANISHED’

A woman in India is able to rotate her arm 180 degrees after bones in her shoulder disappeared.

The unnamed 37-year-old was diagnosed with Gorham-Stout disease, sometimes referred to as ‘vanishing bone disease’. 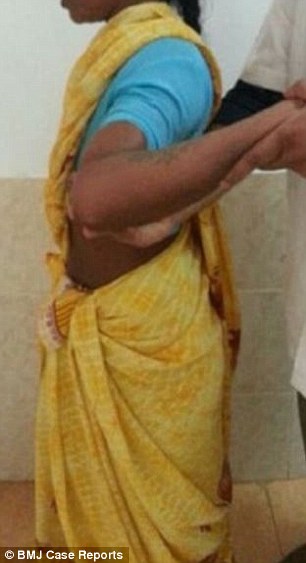 The unnamed 37-year-old is able to rotate her shoulder 180 degrees. She was diagnosed with Gorham-Stout disease, sometimes referred to as ‘vanishing bone disease’

The woman, from Pondicherry – a city 93 miles (150km) south of Chennai, went to hospital complaining of shoulder pain.

She told doctors she had experienced the discomfort for three months, and often struggled to use her left arm because of it.

Medics at the Pondicherry Institute of Medical Sciences felt her shoulder and noticed it was ‘soft’.

And they noticed she could rotate her arm exactly 180 degrees – meaning she could extend her elbow fully, when behind her back.

X-rays revealed her humeral head – the round part of the bone that connects the arm to the shoulder – was no longer there.

Writing in the prestigious journal, medics led by Dr Pasupathy Palaniappan wrote there was just a ‘small sliver of bone’. 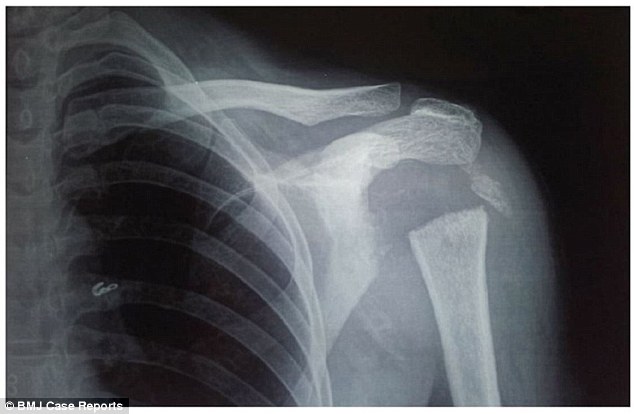 The case report then revealed an MRI scan then confirmed her humerus, the long bone in the upper arm, was disappearing.

The woman refused surgery to correct her condition because it was causing her little disability. Instead, she was given shoulder strengthening exercises.

Doctors revealed the disability did not worsen after two years and therefore she then refused further hospital visits.

Less than 70 cases of the Gorham-Stout disease have been recorded in medical literature, including one earlier this year in the same journal.

Its cause is unknown – but patients are known to have abnormal growths of blood vessels that can eventually break down bone.

MailOnline published incredible X-rays from the same prestigious journal of another woman’s vanishing bones back in April.

The 44-year-old, who was also unnamed, had the scans taken at the Royal Infirmary of Edinburgh over a period of 18 months.

They showed how her humerus, or ‘funny bone’, and her ulnar bone, in her forearm, were gradually fading into thin air.