Woman, 40, has ‘heavy’ tumour engulfing her face that is inoperable

A grandmother claims she isn’t bothered by a ‘heavy’ tumour engulfing one side of her face.

She has had many small operations over the years to manage the growth, but now, doctors have said surgery is too risky and could rob her of her eyesight.

Aline Cerqueria Leite from Três Rios, Brazil, has neurofibromatosis, an incurable inherited condition which has caused a large tumour to grow on the left side of her face 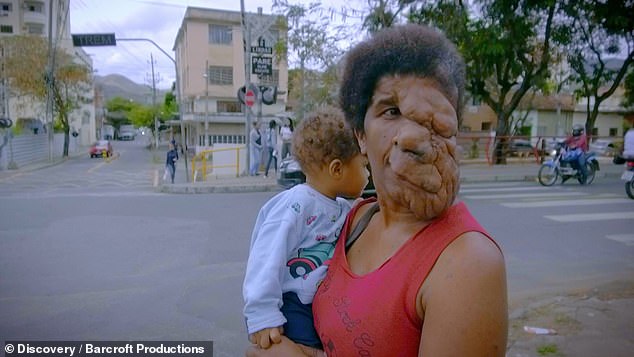 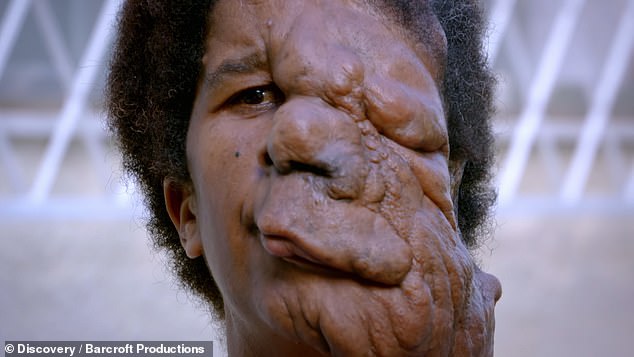 The tumour has been slowly distorting Ms Cerqueria Leite’s face since she was three years old, being managed by minor surgeries over the years

Ms Cerqueria Leite’s tumour is known as a plexiform neurofibroma, a complex mass of connective tissue that has grown along the nerves in her face.

The tumour has been slowly distorting Ms Cerqueria Leite’s face since she was three years old.

She said: ‘The syndrome makes my face a bit heavy but the rest is okay, not bad. It doesn’t bother me much.

‘My face was much bigger. In total I underwent 14 surgeries. The last one stopped my face from dropping again.’

Ms Cerqueria Leite was preparing herself for her first surgery in seven years, to reduce the bulk of the tumour and lift her mouth and ear.

But after travelling 124miles (200km) to Rio, she was told that her tumour had spread to her optic nerve. 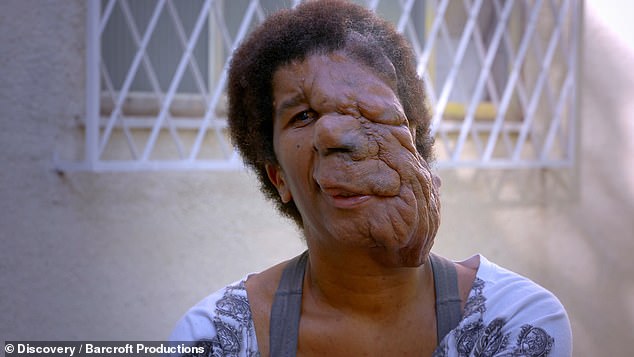 Ms Cerqueria Leite was hoping to have surgery again for the first time in seven years. But the doctor said the tumour had spread to her eyes, nose and jaw, making it too risky to cut out 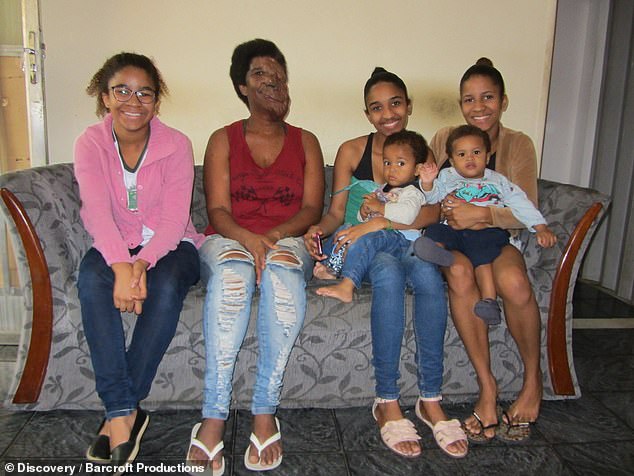 Ms Cerqueria Leite, pictured with her family, remains optimistic about her condition 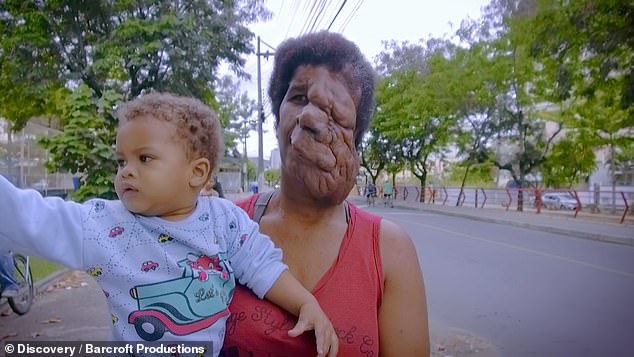 Ms Cerqueria Leite was hoping the surgery would reduce the size of the growth and lift her mouth and ear. She has had 14 surgeries to control the dropping of her features 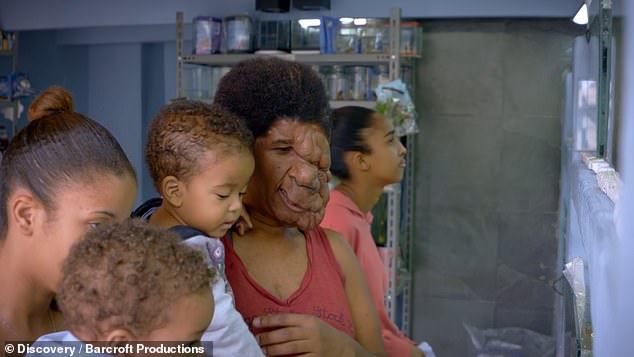 Ms Cerqueria Leite’s tumour is known as a plexiform neurofibroma, a complex mass of connective tissue that has grown along the nerves in her face

Neurofibromatosis type 1 (NF1) is a common genetic condition that affects one in 3,000 people in the UK to some extent.

It is also associated with mild learning difficulties, although most people with NF1 are otherwise healthy and live to a normal life expectancy.

There is no cure, however, surgery can be performed to remove the benign growths.

Any invasive surgery could risk her losing her sight, which doctors believed was not worth it.

Dr Daher, who inspected her tumour, said: ‘It is [also] invading the nasal cavity. It has extended into the jaw.

‘It is very wide and infiltrative. At this moment, it’s not practical to cut it out.’

The doctor has decided to monitor the growth of Ms Cerqueria Leite’s tumour to understand how it is developing.

Ms Cerqueria Leite is determined to enjoy her life.

She said: ‘It wasn’t what I expected. But I’ve not lost hope. I continue on, firm that I will make it.’

Her daughter, Ana, added: ‘I am proud of her for being the mother she is for doing what she does for us.

‘Also, because she joins us to have fun and takes each day as it comes.

‘And for never giving up the fight for herself or for us.’

Body Bizarre is on Saturdays at 10pm on TLC UK.