Woman, 41, has rare disorder which leaves her feeling like she is floating outside her own body

A woman suffering from the rare Alice in Wonderland syndrome says it left her bedridden for two years and feeling like she was ‘floating’ outside her own body.

Etta Shaheen, 41, from Las Vegas, Nevada, was rushed to hospital in early 2020 after she collapsed at home while doing the laundry and started vomiting.

She then spent two years confined to her home, unable to even shower herself, walk the dogs or even go downstairs. But now — thanks to ‘cutting out’ her triggers — she says she is 90 to 95 percent back to normal, although still faces relapses.

Named after the hallucinogenic world of Lewis Carroll’s iconic novel, Alice in Wonderland syndrome alters how people see their own body or space and objects around them.

It was not clear what sparked the rare illness, but it can be caused by infections, repeated headaches — or even tumors.

Etta Shaheen, 41, from Las Vegas in Nevada, collapsed while doing the laundry in early 2020. She was rushed to hospital but tests showed everything was normal 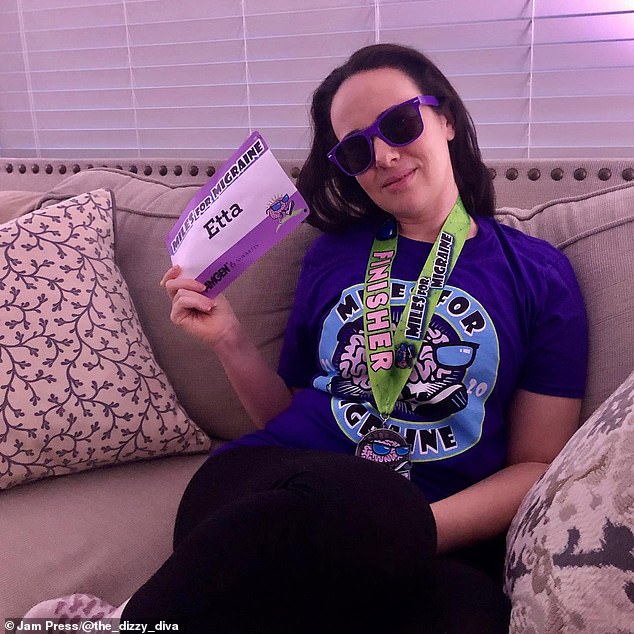 But after she was seen by an ear, nose and throat specialist, Shaheen was diagnosed with Alice in Wonderland syndrome. This alters how people perceive themselves compared to the space around them 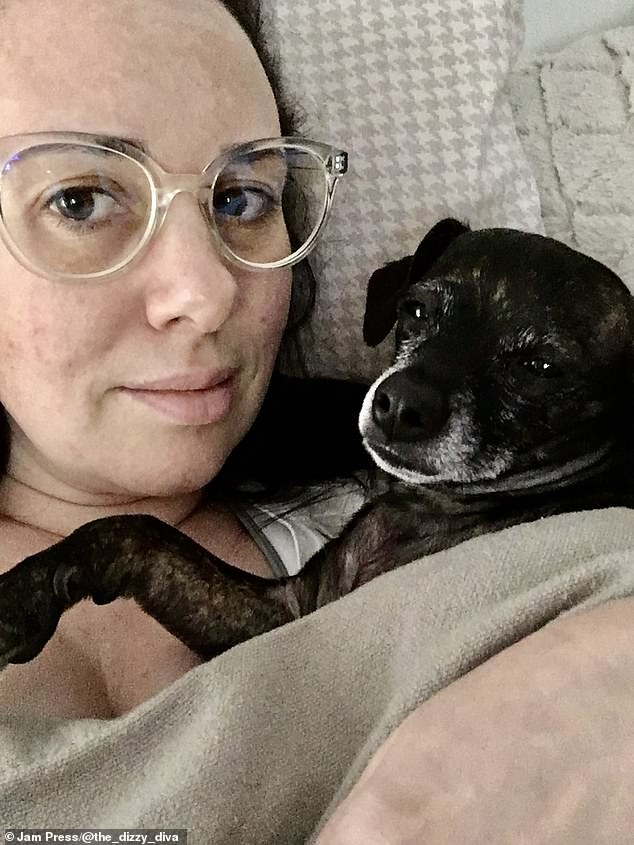 She was discharged and says she spent two years unable to do basic tasks including showering herself, walking the dogs or even going downstairs. She is pictured above with one of the dogs

Shaheen said she first began to feel unwell in November 2019, waking up with a dizzy sensation like there was ‘cotton wool in my head’.

The now-illness and healing advocate went to see several doctors, but all discharged her after scans showed nothing was a-miss.

Two months later, however, she collapsed at home and was unable to get up — leaving her fearing she was having a stroke or heart attack.

WHAT IS ALICE IN WONDERLAND SYNDROME?

This can mean that people, cars and buildings look smaller or larger than they should be, or that distances look incorrect. For example a corridor may appear to be very long, or the ground may appear too close.

Other symptoms include the feeling that time is moving too quickly or too slowly, a feeling that the ground is spongy under the feet and a distorted perception of sound.

It is most common in children but some people also experience it later in life.

Symptoms most commonly occur at night.

The cause is not know but the syndrome is thought to be associated with migraines, epilepsy and glandular fever.

There is currently no known treatment for AIWS other than to look for an underlying cause that can be treated.

Shaheen called her partner Michael, 41, who rushed back to the house and called an ambulance.

Tests on her blood, brain and eyes at the hospital showed nothing was wrong.

But ten days later Michael called in an ear nose and throat specialist  who diagnosed her with Alice in Wonderland syndrome — alongside chronic vestibular migraines and Persistent Postural-Perceptual Dizziness.

Shaheen was then discharged and spent years confined to her bed at home — unable to cook, clean, walk her dogs or even shower herself — fearing the sense of weightlessness.

During this time she learnt how to manage her symptoms, to help her get back to normal.

Shaheen said she began by cutting out her triggers — including her former diet, ‘toxic’ people and not exercising often.

She also signed up for a course involving ‘creating new neural pathways’, which she hoped would distract her from the condition.

Today Shaheen is almost entirely back to normal, but still relapses at times thanks to the syndrome.

Describing the symptoms, she said: ‘From when I first fell, my symptoms of Alice in Wonderland syndrome started to develop.

‘It was almost immediately after that I felt this awful spaced out feeling like I wasn’t connected to my body anymore.

‘I had sensations of not being in my body or felt like I was floating outside of myself.

‘You know you are standing, say for instance on the sidewalk, but you feel like you are behind yourself looking through glass and your life isn’t realy anymore.

‘It’s as if you are observing yourself from somewhere else.

‘For me, I used to feel as if I was floating above myself and I was totally and utterly detached from who I was.

‘This feeling is absolutely terrifying because you don’t know when it will stop.’

Shaheen says she will be struggling against the condition for the rest of her life.

Describing her treatment, she said: ‘The most important thing was not to put a name or emotion to my symptoms. I had to relearn how I thought about my disease and how I approached it to be able to heal. 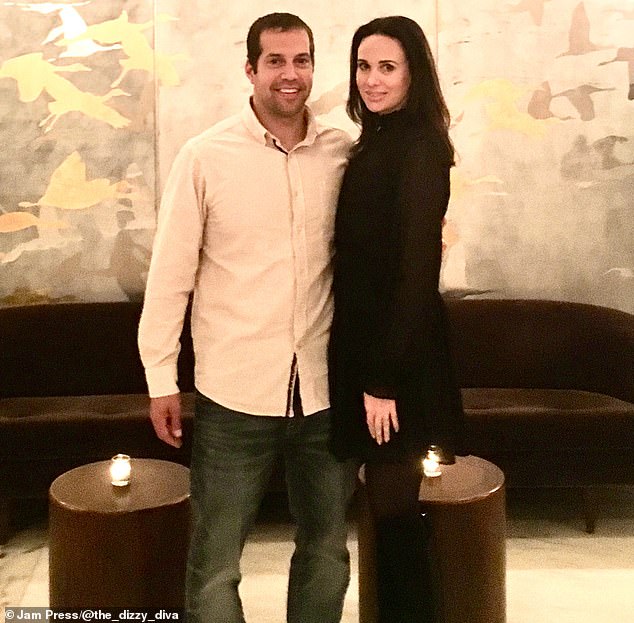 Shaheen is pictured above with her partner Michael, also 41, who has helped her get through the condition 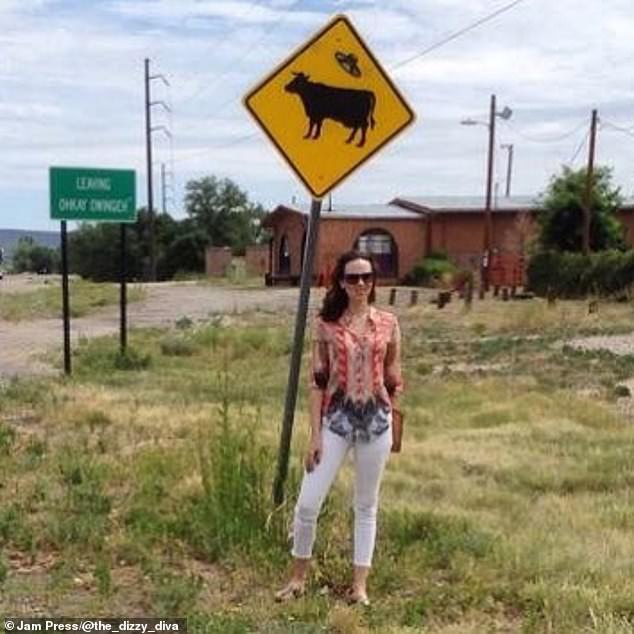 Shaheen said repeated exercise, cutting out ‘toxic people’ and changing her diet all helped to ease the symptoms

‘It took a tremendous amount of work. Sometimes, doing these exercises several hours a day. I had to think of myself as a healing person, not a sick person.

‘[But] I will always have to manage them to some extent for the rest of my life.’

Alice in Wonderland syndrome can trigger feelings of weightlessness as well as a sense that parts of the body or objects are changing size.

This can mean that people, cars and buildings look smaller or larger than they should be, or that distances look incorrect. For example, a corridor may appear to be very long or the ground appear to be very close.

There is currently no known treatment for the condition, other than looking to ease an underlying cause.

It is very rare overall with only about 140 cases described in medical literature to date.

Shaheen shares her journey on Instagram, and says she is contacted ‘almost daily’ by people seeking help with the illness.