Woman, 42, is allegedly stabbed to death in front on her two young children

Horror as woman, 42, is allegedly stabbed to death in front of her two young children – as a man is arrested after a search of the neighbourhood

A woman has allegedly been stabbed to death in front of her two children by a man believed to be their father.

Police discovered the body of the 42-year-old at 6.30pm on Tuesday at an address on Brae Street, the Range, at Rockhampton in Central Queensland.

The woman died at the scene after being found with horrific wounds to her neck and abdomen.

Police discovered the body of a 42-year-old woman after 6.30pm on Tuesday night at an address on Brae Street, The Range at Rockhampton in Central Queensland

A neighbour told the Morning Bulletin two children ran across the road screaming.

Police brought in the dog squad to follow a blood trail into the Botanic Gardens in an hour-long man-hunt for the alleged attacker.

Officers arrested a 45-year-old man on Pennlington Street at about 8.20pm.

He was transported to Rockhampton hospital in a serious condition with self-inflicted wounds.

‘We are speaking to a number of witnesses… very tragic events tonight given the actual incident appears to be witnessed by two young children,’ Det Snr Sgt Peachey said.

‘We will obviously be dealing with those two young children tonight and providing them with the care that they need.’

‘We are making sure that there is some support around them at the moment, obviously they are distraught … they have witnessed their mother tragically become deceased.’

Queensland police will allege the man and woman were known to each other. 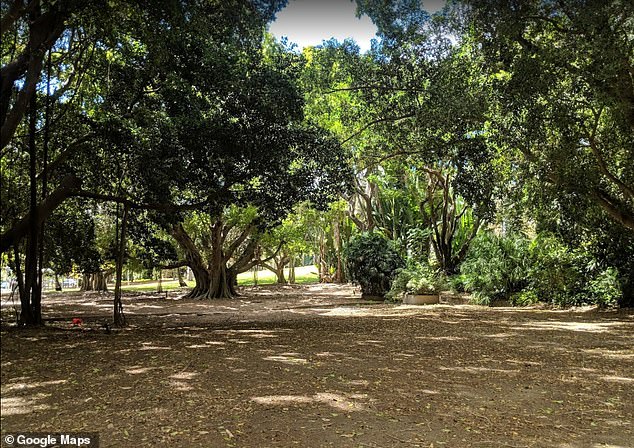