Woman, 46, is rushed to hospital after being shot on the streets of north London

Woman, 46, is rushed to hospital after being shot on the streets of north London

A woman was injured and taken to hospital after a shooting on the streets of north London last night.

The 46-year-old woman was shot and wounded on Lordship Lane in Haringey shortly before 10pm.

She remained in hospital in the early hours this morning with police awaiting updates on her condition.

Another man suffered less serious injuries which may also be gunshot wounds.

No arrests have yet been made and witnesses are urged to speak to police, with the reference number 7704/sep17.

Footage taken last night showed a police van at the scene with part of the north London street cordoned off.

One witness said it had taken place outside Kenny’s hair salon, in a row of shops which also includes a Ladbrokes and a barber’s shop.

It came just hours after a separate shooting in Haringey, in which a man was left in a critical condition in hospital.

The man was found with gunshot wounds near a residential block in Landsdowne Road around 9.30am yesterday morning. 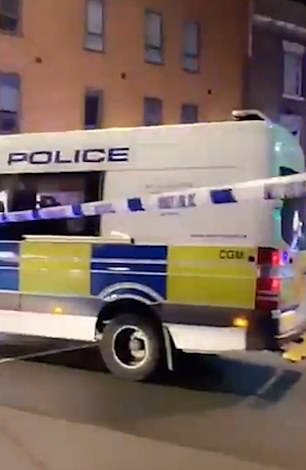 Authorities have come under severe pressure amid a wave of violent crime in London which saw the 2019 murder count reach 100 earlier this month.

On Monday the Home Office said it was trialling new technology which can detect whether people are carrying hidden weapons.

The technology – already in use on the Los Angeles Metro – has been developed to spot weapons like guns, knives and explosive devices concealed under clothing at distances of up to 30ft.

Kit Malthouse, the minister for crime and policing, insisted the Government was ‘pulling out all the stops in the battle against knife crime’.