Woman, 50, reveals what it’s REALLY like when your partner has erection problems

A woman whose partner felt ‘ashamed’ after experiencing erection problems admits she worried he was having an affair at first – after he kept making up excuses to avoid getting intimate.

Joanne, 50, from Kent, met Louis, 52, six years ago at the local supermarket – and says she was assumed he wasn’t attracted to her when the problems first began.

Speaking exclusively to FEMAIL, Joanne – who has two children from a previous relationship – explained: ‘You do wonder if you have done anything wrong, or that the relationship might not be as strong as you first thought.’

‘I did begin to wonder if he was in fact having an affair, as he kept buying me flowers and not wanting to be intimate.’

Joanne, 50, from Kent, met Louis, 52, six years ago at the local supermarket – but at first, he hid his erectile problems with her because he was ’embarrassed.’ Pictured, together 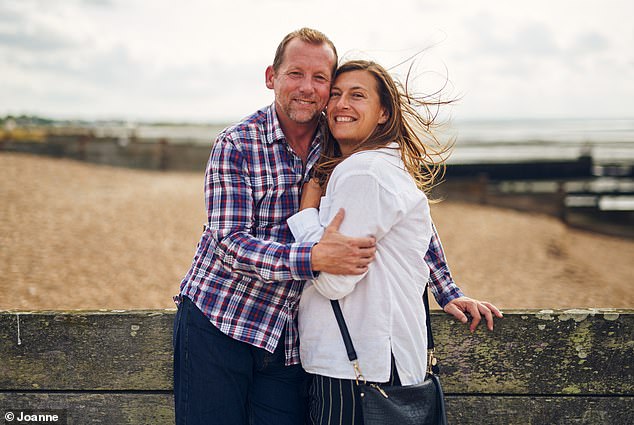 Louis first started to experience erection problems around 4 years ago – around the time his mother had suddenly passed away. Pictured, with Joanne

She continued: ‘Deep down I knew he wouldn’t dare, but I was worried that Louis might no longer be attracted to me. It didn’t cross my mind that it would be something as simple, and treatable, as erection problems.’

It comes as a new survey, conducted by Viagra Plus, revealed erection problems (EPs) are having a serious impact on UK relationships, with one in 14 men with EPs (7%) saying they’ve caused the end of their relationships.

Joanne and Louis met six years ago when Joanne was working in their local supermarket,

‘I always noticed her when I was shopping and tried to do little things to impress her,’ explained Louis. ‘One night we bumped into each other at a pub in our town and I said, ‘Oh you’re the girl from the supermarket!’ The rest was history.’

Joanne added: ‘I do remember spotting him before in the shop, but it was when he came up to me at the bar and I had the chance to chat to him properly that the sparks really began to fly.’ 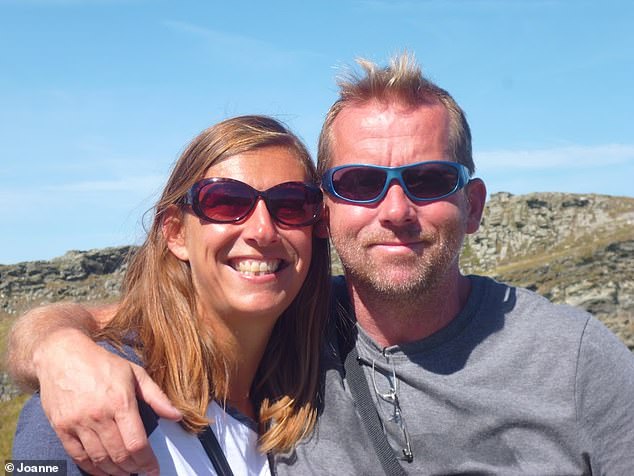 Louis admitted he felt ‘ashamed’ when he first started experiencing erection dysfunction around four years ago. Pictured, with Joanne

But while the couple were still very intimate, Louis started experiencing a problem down below.

‘I first started to experience erection problems around 4 years ago,’ he explained. ‘My mother had suddenly passed away, about 6 months prior, and one of my brothers was in a coma due to an unrelated accident.

WHAT IS ERECTILE DYSFUNCTION?

It’s estimated 1 in 10 men has a problem related to having sex, such as premature ejaculation or erectile dysfunction.

Sexual problems can affect any man, whether he is straight, gay, bisexual or transgender.

This is when a man cannot get, or keep, an erection that allows him to take part in sexual intercourse or other types of sexual activity.

Most men experience it at some time in their life, and the causes can be physical or psychological.

Alcohol, smoking and illegal drugs, as well as some prescription medicines, can also cause erectile problems.

Worries about work, money, your relationship, family and not getting an erection can all be factors.

‘I was stressed, grieving, lost and had bottled it up inside. Naturally this was effecting my libido….’

He continued: ‘The main problem for me was being able to maintain an erection.

‘I didn’t know this at the time, but erection problems can often be caused by stress and in my case, the more I worried about not being able to be intimate with Joanne, the more stressed I became. A vicious circle as such.’

‘I just avoided being intimate with Joanne for a while, which did cause a little tension in the relationship.’

Louis admits he ‘definitely felt a bit ashamed’ because he didn’t understand why the erection problems were happening.

‘I had a bit of a crisis of confidence, thinking that I would be able to fix it on my own, or that it would simply go away with time,’ he said. ‘It’s definitely a male ego thing.’

‘You think there is something wrong with you or that you’re less of a man, when that is not the case at all.’

However, Louis didn’t initially discuss his erection problems with Joanne because he felt ‘quite embarrassed.’

‘I just didn’t understand what was “wrong” with me,’ he explained. ‘I was still attracted to her, but I was making excuses to get out of having sex and being intimate.’

‘Things like: “I’m too tired’”or going to bed before her to avoid sex. I wanted to be intimate, but my erection problems made me feel unconfident, so I just avoided it. I didn’t understand why I was struggling and felt embarrassed about it.’

While Joanne tried to be supportive, she couldn’t help thinking that Louis might not be attracted to her anymore – especially when he tried to avoid being intimate.

But when the problem didn’t go away on its own, Louis, who had been with Joanne for two years at the time, decided he needed to seek advice and open up to someone about it.’ 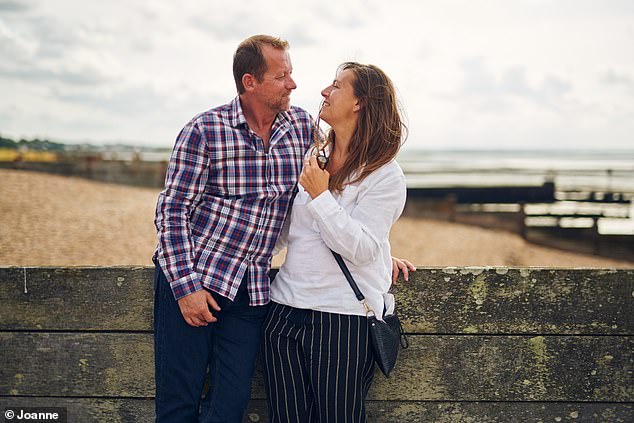 Now, using products like Viagra Connect is a normal part of their sex life – although Joanne says they don’t have to use as much. Pictured, together

‘I decided that I needed to find out what was happening, so I headed online to get some medical advice from a doctor via an online pharmacy.’

‘Once I understood what the problem was and that there was a solution, I was honest about this with Joanne and explained that I had been experiencing erection problems.’

THE COUPLE’S ADVICE TO OTHERS ON OPENING UP

Louis said: ‘I would definitely say that any men experiencing erection problems should not be embarrassed and speak to their partner about what is going on.

‘If I’d known before how common erection problems are and how they can be caused by a variety of lifestyle factors such as stress, being overweight or drinking too much, I would have got help much sooner.

‘I’m no longer ashamed about erection problems and try to be really open and honest about the issue with my mates, so if they go through it themselves, they know it’s very normal.

Joanne added: ‘I would agree. I would advise any other women who suspect their partner may be experiencing erection problems to not be afraid to initiate a discussion with them about the issue.

‘Erection problems are nothing to be embarrassed about and are often easier to deal with, if you deal with them together and support one another.

‘I felt so bad because I knew that it must have been affecting Joanne, but I wasn’t sure how to bring the conversation up.

‘It took me about six to eight months to finally open up to her about the issue and I’m so glad that I did.’

Joanne added: ‘I was so relieved when Louis finally told me that he was experiencing erection problems.

‘It was a huge weight off my shoulders, and I found that as soon as we were open with one another about the problem, we were in a much happier and more honest place.’

Louis continued: ‘She’s been so supportive and, I guess, kind about it. I guess I should have spoken to her earlier.

‘If I had known that she was worrying that I was having an affair, then I would have spoken to her much earlier…’

While Joanne says they still have their challenges as any couple do, they’re definitely more open and honest with one another.

‘As soon as Louis opened up to me, it was like a weight had been lifted and I was so relieved,’ she said. ‘Intimacy is an important aspect of any relationship and it’s nice to not have to worry about this anymore and just enjoy one another.

‘I’m glad that Louis’ happy and back to the man I fell in love with.

Louis: I completely agree. If I’d known before how supportive and understanding that Joanne would be, I would have opened up to her so much earlier.

‘Our relationship has gone from strength to strength and I’m really excited about what the future will bring for us.

Now, using products like Viagra Connect is a normal part of their sex life – although Joanne says they don’t have to use as much.

‘We did use it regularly but now things seem to be returning to normality,’ she explained. ‘It’s still there in the bedside cabinet, just in case, but most occasions occur naturally these ‘

‘Louis has changed jobs, his brother is back to full health, he’s less stressed and anxious. It’s good to know that we don’t have to worry about being intimate anymore. We can just be ourselves and continue to live our lives like we always have.’