A woman who had three sets of breast implants in 24 years has opened up her excruciating battle with breast implant illness, saying doctors continuously denied her requests to remove them despite her alarming symptoms.

In an essay published by Insider, Bee Wickert-Leng, 54, shared how her mental and physical health steadily deteriorated after she underwent her initial surgery in 1997. Instead of removing her implants when issues arose, doctors kept replacing them.

For over two decades, she suffered from breast implant illness (BII) — an unofficial term for the varying health issues that are believed to be caused by breast implants.

‘Now, almost a quarter of a century later, I’ve had them removed, but I don’t know if I’ll ever feel fully healthy again,’ she said. ‘The implants have already done their damage.’

Bee Wickert-Leng, 54, opened up about how she suffered from breast implant illness (BII) for over two decades after having three different sets of implants in the past 24 years 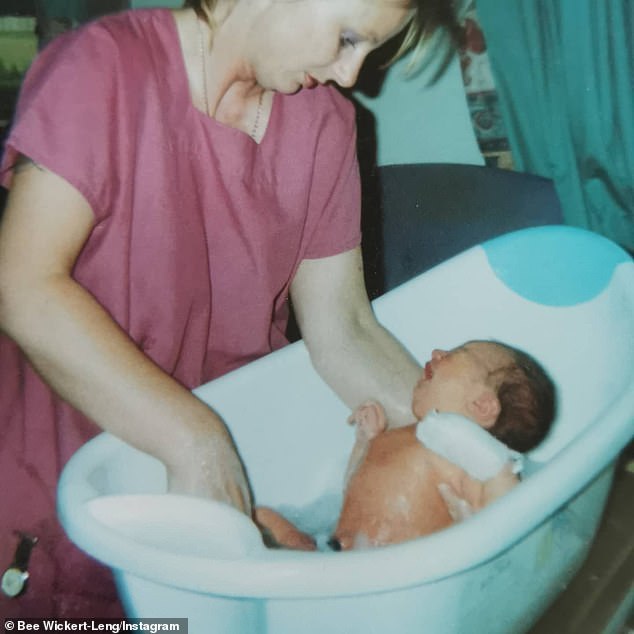 In 1997, Wickert-Leng (pictured working as a midwife) got her first set of 250cc soya implants, but she was told 19 months later she needed to get them removed because they were toxic

Wickert-Leng explained that she never developed breasts as a teenager and the men in her family, including her abusive father, bullied her over her flat chest.

She carried those insecurities with her into adulthood and would even hide her chest from her husband. She said it was her general practitioner who suggested she get breast implants, assuring her they were ‘100 percent safe.’

However, he wanted her to wait until she was done having children before doing the procedure. After undergoing a hysterectomy, she had the surgery in November 1997 at the age of 30.

Wickert-Leng was given 250cc soya implants and was still adjusting to her new chest when she was told in May 1999 that she needed to get them replaced because they were found to be toxic and later recalled.

Doctors learned during the operation that the soya in one of her implants had leaked through the silicone shell into her breast tissue. The only other option for her at the time was saline replacements.

Wickert-Leng said her health continued to decline after she got her second set of implants, saying her left implant encapsulated almost immediately after.

The complication, which is also known as capsular contracture, occurs when scar tissue forms a constricting capsule that squeezes the breast implant.

‘Capsular contracture can cause chronic pain and distortion in the shape of the breast, and it can make the breast rise higher on the chest,’ according to Breastcancer.org. 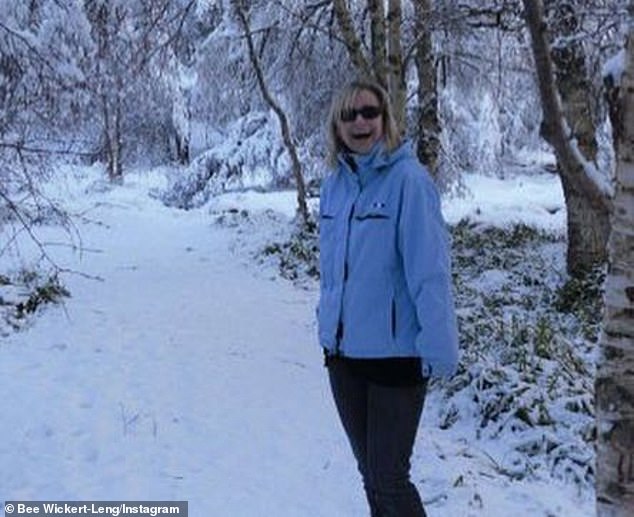 Wickert-Leng was given saline replacements during her second surgery and started suffering from headaches, fatigue, and anxiety attacks 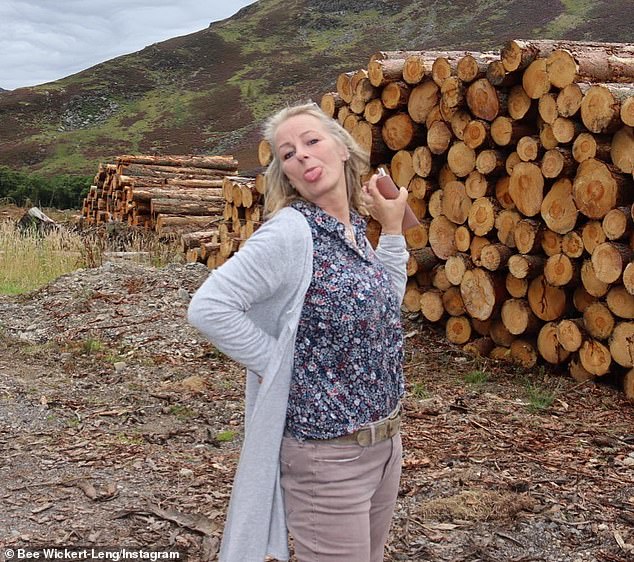 When she moved to Scotland, it was agreed that she needed them removed, but her new surgeon insisted on replacing them with polyurethane implants

By the early 2000s, she was also suffering from headaches, fatigue, and anxiety attacks, which she had never had before. She was told the symptoms would be temporary, and doctors didn’t find any evidence that her implants were causing the issues.

Both of her implants were encapsulated when she moved to Scotland in 2007 following her divorce. Her new general practitioner agreed that she needed to get them removed, and she was referred to a surgeon.

‘I told them I didn’t want new implants and preferred a fat transfer,’ she recalled. ‘However, the surgeon disagreed and gave me polyurethane implants in September 2007.

‘My symptoms still didn’t go away, and three weeks after the surgery I asked again to get my implants removed. Yet again, my surgeon refused to remove them; worse still, they made it seem like they’d done me a favor.’

Wickert-Leng said her doctor dismissed her requests to have her implants removed for 13 years. She battled increased breast pain and depression, and her hair started falling out.

In 2020, she got a new doctor and was finally able to make plans to have her implants removed after more than two decades of suffering. 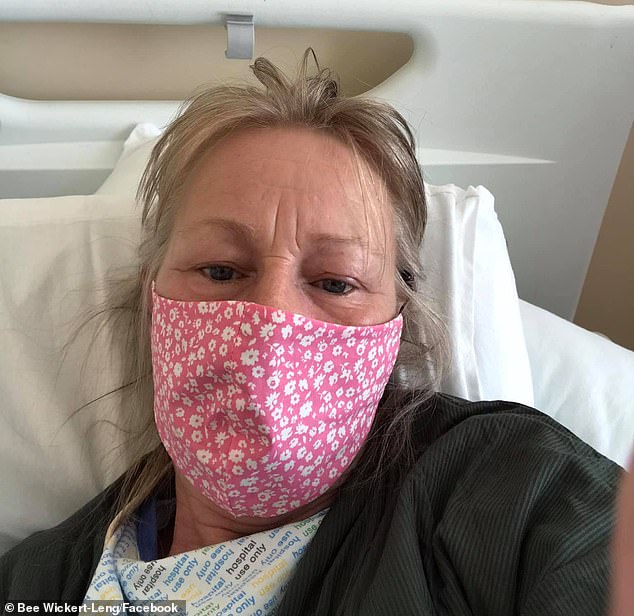 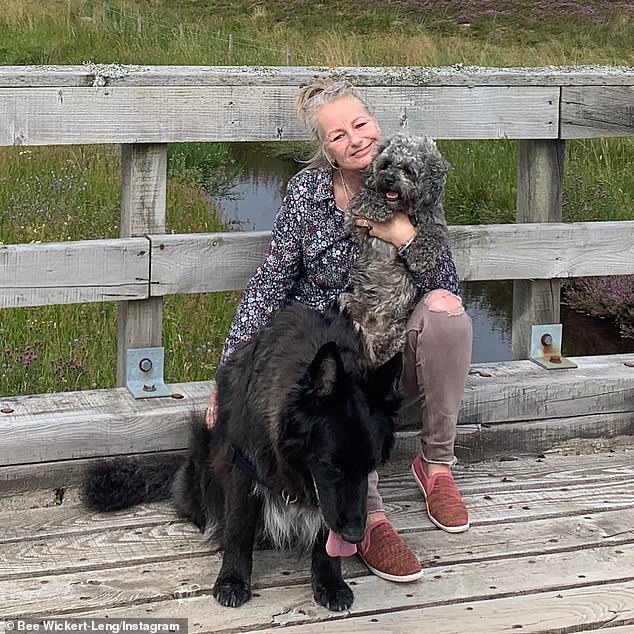 Wickert-Leng said she isn’t sure she will ‘ever feel fully healthy again,’ but she has seen major improvements in her mental and physical health since having her implants removed

‘My explant surgery was scheduled for July 2021, but my suicidal ideation got really bad, and I almost didn’t make it,’ she explained.

There were also concerns that she had breast-implant-associated anaplastic large cell lymphoma when she finally went under the knife.

She insisted that getting her implants out saved her life, and while she may never be fully recovered, she has seen major improvements in her mental and physical health.

‘My immune system is still recovering, but my depression has gotten so much better, and I have little tufts now from my hair growing back in various spots. My headaches are less frequent, I can finally breathe again with the weight removed, and the psoriasis flare-ups I was having due to my overtaxed immune system are starting to clear, she said.

‘I still have episodes of random allergic reactions to things, but I now have a really good GP, and we are working through it. Everyone says it’s probably my body detoxing — it might be, but getting them removed after 24 years isn’t a miracle cure.’

Anyone who is in suicidal crisis or emotional distress should call The National Suicide Prevention Lifeline via a toll-free hotline with the number 1-800-273-8255.