Woman, 76, seeks official pardon for her role in a string of 1950s killings when she was 14

Caril Ann Clair (pictured in 1993) is seeking a pardon for her role in 11 murders in the 1950s when she was 14, arguing that she accompanied her boyfriend because he threatened to murder her family

A woman who accompanied her older boyfriend during a string of killings recounted in the Bruce Springsteen song Nebraska is seeking an official pardon, saying she was 14 years old at the time and that he had threatened to kill her family if she didn’t obey.

Caril Ann Fugate, who is now 76 and goes by her married name of Caril Ann Clair, said in her application for a Nebraska pardon that she’s seeking peace of mind as she ages, according to the Omaha World-Herald.

She was 14 when she accompanied her 19-year-old boyfriend, Charlie Starkweather, on a bloody journey that left 11 people dead, including her mother, stepfather and baby half sister, before they were arrested in Wyoming.

Starkweather was charged with 11 counts of murder but went to trial for only one.

He was convicted and executed by electric chair on June 25, 1959.

Clair was charged in only one of the killings, and was convicted and sentenced to life in prison. Her sentence was later reduced and she was paroled in 1976.

In her pardon request, Clair, who now lives in Hillsdale, Michigan, said the Nebraska Board of Pardons has a chance to right a historical wrong.

‘The idea that posterity has been made to believe that I knew about and/or witnessed the death of my beloved family and left with Starkweather willingly on a murder spree is too much for me to bear anymore,’ Clair wrote in her 2017 application, which the board is scheduled to consider on February 18.

‘Receiving a pardon may somehow alleviate this terrible burden.’ 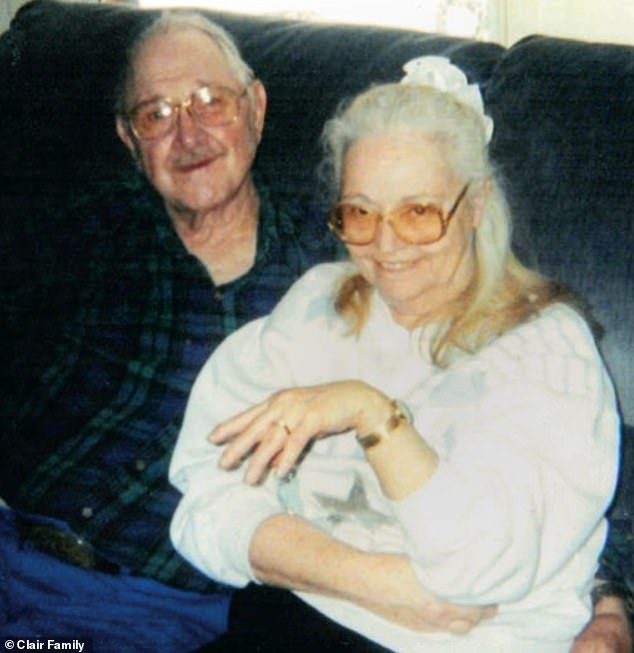 Caril Ann Fugate, who is now 76 and goes by her married name of Caril Ann Clair (pictured with her late husband), said in her application for a Nebraska pardon that she’s seeking peace of mind as she ages 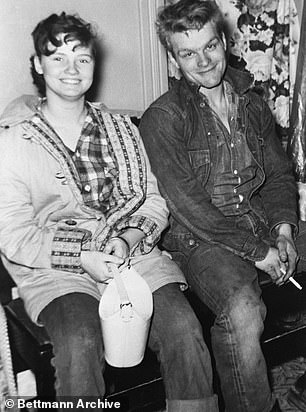 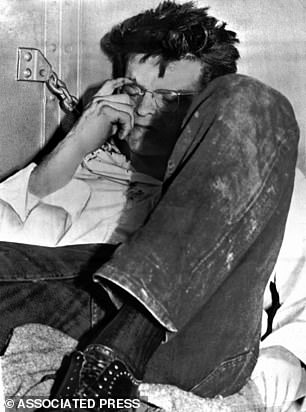 Clair was 14 when she accompanied her 19-year-old boyfriend, Charlie Starkweather (left, together before the killings), on a bloody journey that left 11 people dead. Starkweather is seen in jail in 1958 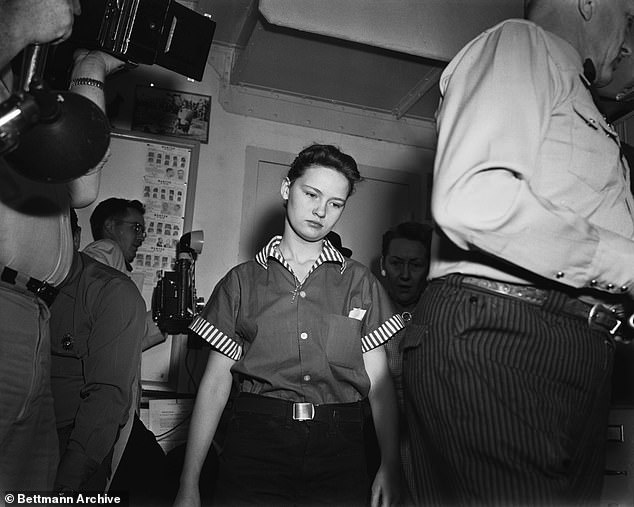 In her request, Clair (pictured when she was 14 in 1958) said a pardon would represent only a formal forgiveness of her crime, which she says she committed in mortal fear

In her request, Clair said a pardon would represent only a formal forgiveness of her crime, which she says she committed in mortal fear.

‘When I was 14 years old, I was abducted and held captive by Charlie Starkweather. I was terrified and did whatever he wanted me to,’ wrote Clair, who acknowledged that she was present when one of the victims was shot and that she did hold the money taken from him.

‘I lived in constant fear for my family’s safety. Because I loved them with all my heart,’ Clair wrote.

Among those who submitted letters in support of her pardon request were a granddaughter of two of Starkweather’s victims, two of Clair’s stepsons, a former prison warden and a Michigan woman who hired Clair as a nanny.

The infamous saga, which inspired the 1982 Springsteen song Nebraska and the 1973 film Badlands starring Sissy Spacek and Martin Sheen, began in November 1957 when Starkweather robbed and shot dead 21-year-old gas station attendant, Robert Colvert, in Lincoln. His body was later discovered on a country road.

At the time of his death, Colvert had been recently been discharged from the US Navy.

On January 21, 1958, authorities say Starkweather went to Clair’s house and killed her three family members after her mother and stepfather told him to stay away.

Starkweather said Clair was home the entire time, but she said she wasn’t and that when she got home, he met her with a gun and told her that her family was being held hostage and wouldn’t be killed if she obeyed him.

Her boyfriend killed her stepfather Marion Bartlett, 57 and his 35-year-old wife Velda. Their bodies were found in an outbuilding.

Their two-year-old daughter, Betty Jean, had been clubbed to death with the butt of a gun and her body stuffed in a cardboard box.

The two then went on the run, and Starkweather killed seven more people as they made their way to Wyoming. 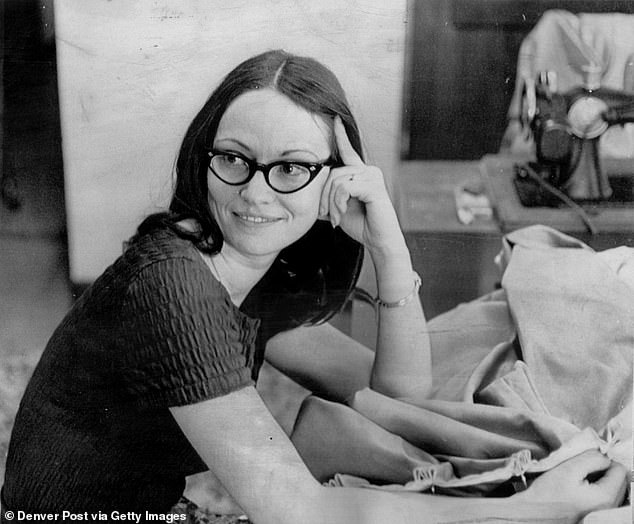 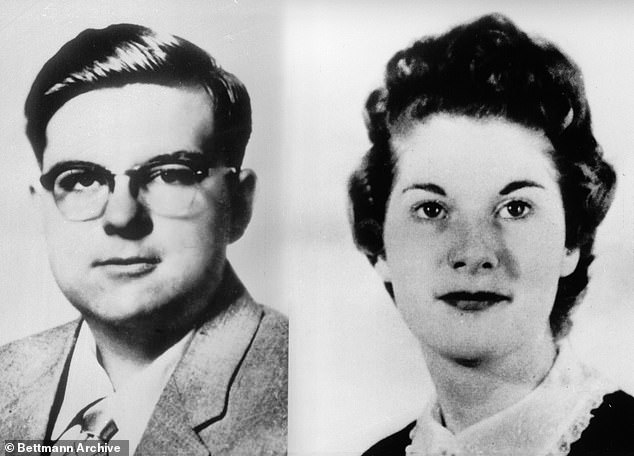 Clair admitted taking $4 from Robert Jensen’s (left) wallet just before he and his girlfriend, Carol King (right), were shot to death. Starkweather then left their bodies in a storm cellar

Their first stop was to the home of August Meyer, Starkweather’s friend.

Starkweather shot and killed Meyer in his stables before beating the man’s dog to death.

That same night, 17-year-old Robert Jensen and his girlfriend, Carol King, 16, became the next victims.

Clair admitted taking $4 from Jensen’s wallet just before he and King were shot to death. Starkweather then left their bodies in a storm cellar.

One of the main factors in Clair’s conviction was that she was holding a shotgun at the time.

One of the main factors in her conviction was that she was holding a shotgun at the time.

Starkweather then stole Jensen’s car and drove back to Lincoln, Nebraska.

He selected the home of C Lauer Ward, 48, as their sanctuary, killing the local businessman, his wife, Clara, 46, and their maid Lillian Fencil, 51.

Starkweather then used Ward’s Packard to drive head to Washington state, but they never made it that far.

Instead, they stopped in Douglas, Wyoming, which is nearly 470 miles west of Lincoln, to ditch the Packard.

After ditching the vehicle, they came across Merle Collison, 37, who was napping along the highway in his car.

Collison became the last victim. He was shot dead while sitting in his car.

Starkweather and Clair were arrested the same day. Though 11 people were killed, Starkweather only went to trial for the murder of Collison.