Woman, 76, survives falling from her SEVENTH FLOOR apartment window after she lands on fruit crate

Woman, 76, survives falling from her SEVENTH FLOOR apartment window after she lands on a crate of fresh fruit and vegetables being delivered below

A 76-year-old Manhattan woman who fell seven stories from an Upper East Side building on Friday was saved by landing on crates full of vegetables including carrots, onions, pears, and limes.

Barbara Heller, who recently had back surgery and had trouble walking, was in her apartment with a friend at around noon when she decided to walk toward the window because she was getting hot.

Police said she accidentally fell from her apartment window and landed on crates of produce that workers were unloading on the sidewalk below, according to the New York Daily News.

She was rushed to a hospital with a broken pelvis, a broken rib, a pierced lung, and some bruises, according to her ex-husband, Charles Heller.

Barbara Heller, 76, was miraculously saved by crates full of fruits and vegetables which broke her fall on a Manhattan sidewalk on Friday

‘She hadn’t been feeling well and she was having trouble breathing,’ said the friend, Kelli Blue.

‘She wanted to get some air so I opened the window for her about a foot.

‘She opened it the rest of the way and was leaning out.

‘I heard this loud crash, but you hear a lot of crashes on First Ave.

‘I’m nosy, so I ran out onto the terrace and it didn’t even occur to me it was her.

‘When I looked down I thought she was dead and I was freaking out. I just ran down there.’

Charles Heller told the Daily News that his ex-wife landed on a plastic storage bin that jutted out from a first-floor ledge.

She then dropped onto the boxes of produce, according to Heller.

‘It’s amazing to not only survive but to not have a head injury.’

A supermarket worker who was hauling cases of food said he witnessed Heller fall to the sidewalk. 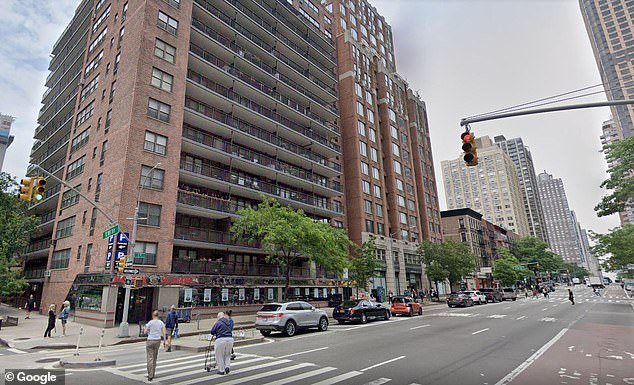 ‘She fell and hit the plastic storage container on the first floor and then rolled off and fell onto the pallet,’ Dante McFarlane, 22, said.

McFarlane is an employee of the Morton Williams supermarket on the ground floor at First Avenue and East 81st Street in Manhattan.

McFarlane said that pedestrians immediately came to her aid.

‘She was on her side, making noise,’ he said.

‘She knew her name. She was bleeding from one of her feet.’

Blue said she was helping her friend get to and from appointments and taking care of her dogs.

Barbara Heller has lived in the building since 1964, according to the Daily News.

She retired after working at Hunter College.

Heller was also a burlesque performer from New Orleans, according to Blue.