‘The pleasure was obviously ALL yours’: Car dealership contacts woman who left a VERY embarrassing item in the glove box of her vehicle before trading it in

A woman who accidentally left a sex toy in the glove box of her car before trading it in was left red in the face after the car dealership called her out on Facebook.

But soon after she received a text message from the dealership about her ‘not so little friend.’

‘Hi (redacted), We appreciate your business this morning, we also hope you thoroughly enjoy your new vehicle,’ the dealership wrote.

‘In regards to your Trade in … I think you may have to collect your ‘Not So Little Friend’ from the glove box.

A Gold Coast woman trader her car at Molendinar-based Auto Direct Wholesale Qld on Saturday morning. But the dealership said the woman forgot to collect her sex toy (pictured)

The woman, whose identity hasn’t been revealed, replied to the text message.

A screenshot of the text message and a picture of the conspicuous sex toy were posted to Auto Direct’s Facebook page.

‘To the Polite young lady who Traded a vehicle with us this morning.. It was lovely to meet you… but the pleasure was obviously ALL yours,’ it read

‘Can somebody please TAG this Big Guys owner so she can collect her friend!’

The post quickly went viral, with many social media users commenting about it.

‘Bahaha this has made my day thanks for the laugh p.s was not me,’ one person wrote.

‘Auto Direct Wholesale QLD, this has turned into a pretty unique marketing opportunity for you guys. Good on you for sharing, and making the most of the hard and sticky situation you’ve been placed in,’ a second person wrote.

The car dealership replied back saying: ‘Yes! If it ever becomes profitable to post pictures of other people’s sex toys, we will be an amazing market position to launch!’

But some people also took an objection to the post.

‘Why would you go out of your way to publicly embarrass her? You would’ve had her private details from the sale,’ said another user.

‘And you could’ve contacted her subtly and handled it with a bit of dignity…….But then again that’s probably why you’re used car salesmen!.’ 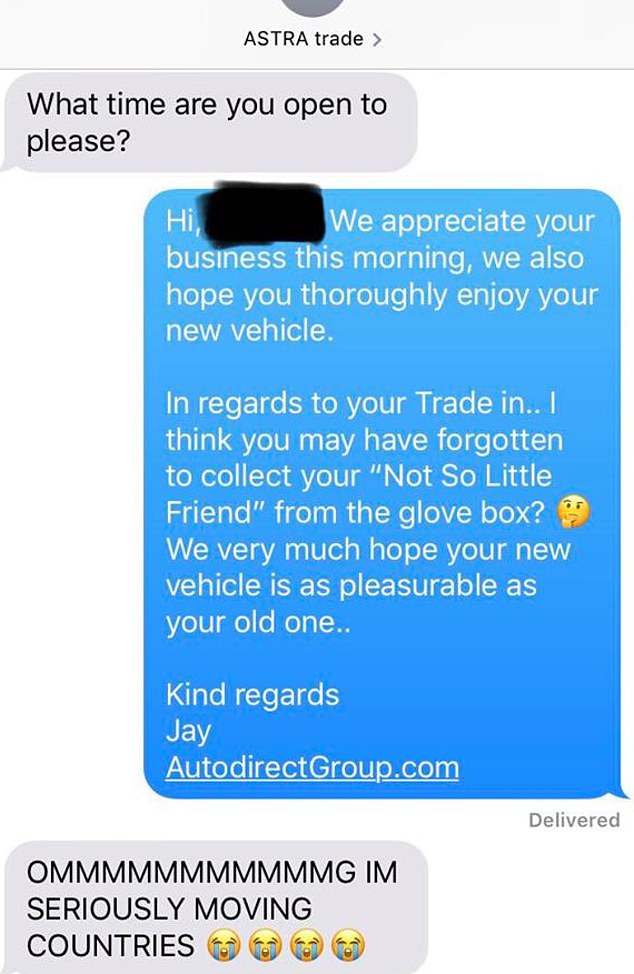