A woman has sparked a debate over whether caring for elderly parents should be an obligation, after revealing she and her husband recently moved closer to their aging in-laws.

Writing on Mumsnet, the anonymous woman, from the UK, explained that she finds it ‘sad’ that the average person doesn’t want to look after their elderly relatives.

The woman went onto explain that she feels like she’s in the minority of people who try to care for their elderly parents.

But many who responded to the post labelled the woman ‘naive’ and instead argued that in some cases it’s too ‘heart-breaking’ and suggested that sometimes a care home is the best option.

‘I think you’re very naïve,’ wrote one. ‘My mother was adamant that she didn’t want us to look after her. When you live through what’s involved, you might change your mind. People with dementia can live for years.’ 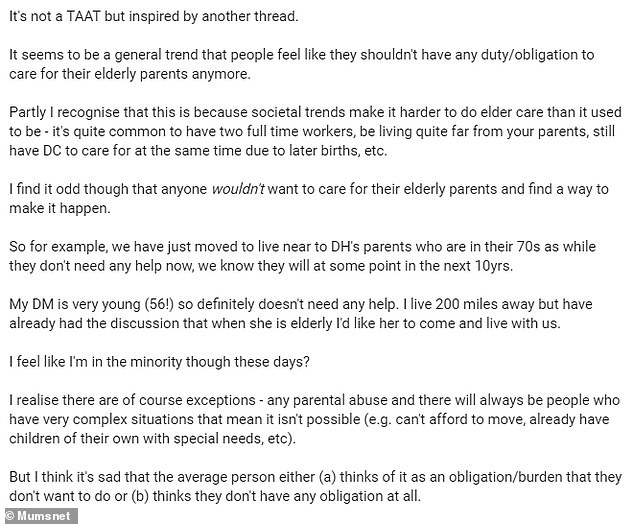 The woman in question told of a previous conversation when she and her husband had discussed plans for her mother to move in with them when she gets older.

She explained: ‘I realise there are of course exceptions – any parental abuse and there will always be people who have very complex situations that mean it isn’t possible.’

‘But I think it’s sad that the average person either (a) thinks of it as an obligation/ burden that they don’t want to do or (b) thinks they don’t have any obligation at all.’

A stream of responses to the post blasted the woman for assuming that everyone should take responsibility for their aging parents.

One person commented: ‘You have not seen the soul destroying side of caring for elderly parents, when they can no longer care for themselves and any amount of visiting carers don’t make up the difference… ‘

‘It is utterly heartbreaking and I have full sympathy for anyone who then makes the difficult decision to seek a care home instead.’

Another wrote: ‘I think your OP is bonkers, impractical and inconsiderate. Elder care is a job for a reason. There are so many reasons why someone couldn’t do it even if they wanted to!’

‘As for parents having raised you – well, they wanted to have children so they made a choice.’

A third added: ‘We’ve made the decision not to move to a town 20 minutes away as PIL are approaching 80 and need us more. However, the idea of either of them living with us fills me with horror to be honest.

‘I’m happy to help run them to doctor appointments and do food shopping but if they had dementia or needed help with the toilet, I’m not sure I could do it for ILs. Maybe my own mum. I appreciate that probably makes me selfish.’ 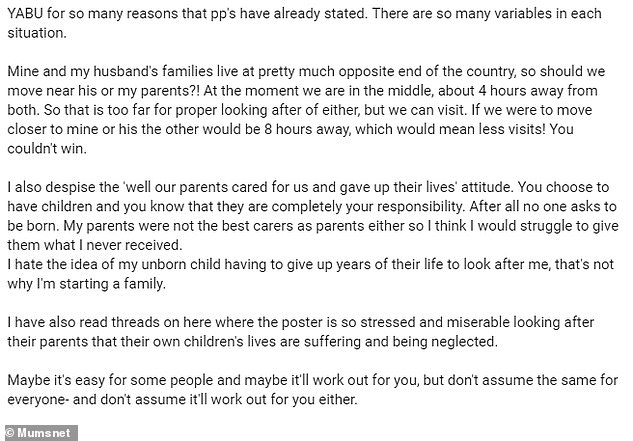 A small number of commenters agreed with the woman that children should accept responsibility for caring for elderly parents.

One person wrote: ‘To think that children should look after their parents. And I think that most children do want to.’

Another said: ‘I would look after my parents in the future. I probably wouldn’t give up my job if forced to choose, but I’d consider reducing my hours and doing as much as I can in my spare time.

‘Also agree with OP that if there are complex medical needs, my care might not be sufficient and a nursing/residential home might be a safer place.’