‘I bit into something crunchy’: Florida woman shares her horror after finding ‘live COCKROACH’ in her Chipotle burrito – but only after taking a very ‘bitter’ bite and spitting out bugs legs

A Florida woman has expressed shock and disgust after she finding a beetle inside her burrito — which she discovered only after she’d swallowed most of it.

Tori Kinley, 23, shared her story on TikTok last month, detailing her horror after she bit down on something crunchy while eating takeout from Chipotle, which as previously one of her favorite restaurants.

When she spit it out, she discovered the legs of what she first thought was a cockroach, but later clarified was a beetle — and said that by then she’d already eaten most of its body.

Yuck! A Florida woman has expressed shock and disgust after she finding a beetle inside her burrito — which she discovered only after she’d swallowed most of it 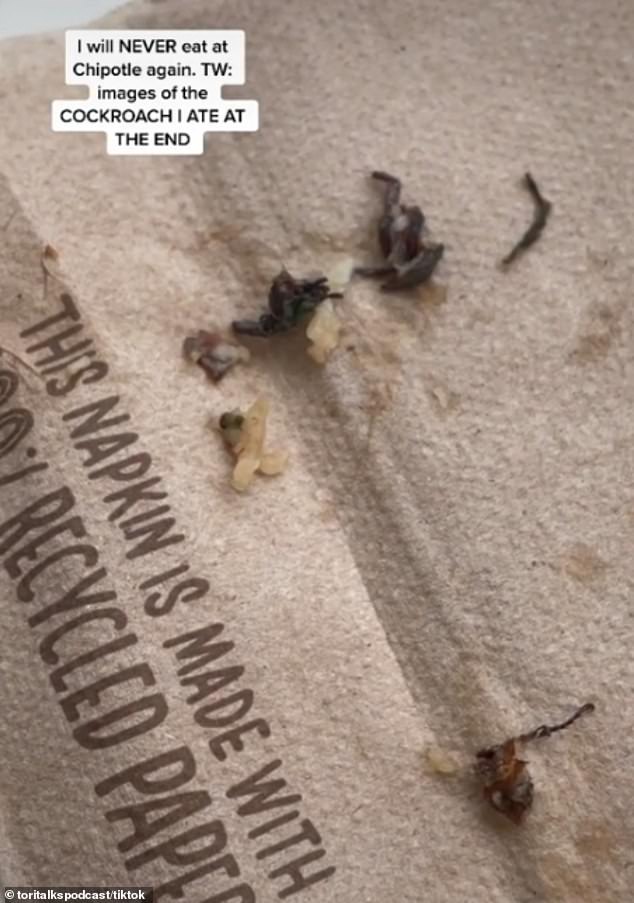 Gross! Tori Kinley, 23, felt something crunchy in her mouth and spit it out to find pieces of what she first thought was a cockroach

The experience was especially horrific for Tori, who is now too disgusted to return to the chain she once loved.

‘I used to eat at Chipotle all the time. One of my favorite restaurants. I am never eating there again,’ she said in a viral video.

‘I was eating my burrito and I bit into something crunchy. And I was like oh, interesting. And I spit it out thinking it was like crunchy corn, something dried,’ she explained.

‘And then I ate something else that was crunchy and I spit it out. And I spit out a cockroach leg!’

Panicked, Tori called poison control, which told her that a roach wouldn’t kill her — though it would likely give her food poisoning.

She said she drank some diluted apple cider vinegar in an attempt to stave off infection. 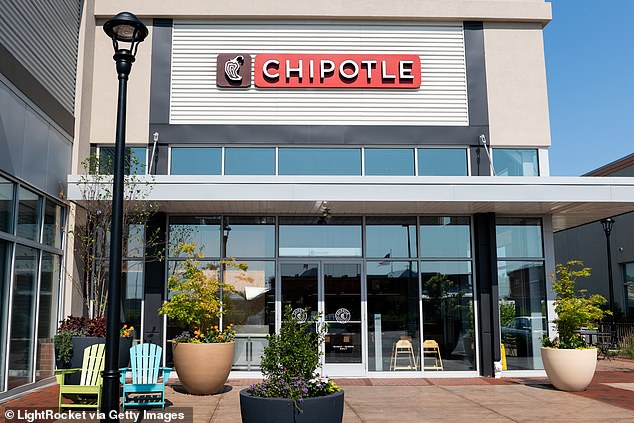 Oh no! She later discovered that it was in fact a beetle, but she says it was alive when she ate it and she swallowed some of it

A couple of hours later, Tori returned to Chipotle to show them what she found, but said the bug ‘had shriveled up by then.’

She assumes this means the bug was still alive when she ate it, saying that it would have already shriveled up if it had already been dead.

She also learned from ‘biologist friends’ that the bug was a beetle, not a cockroach, because of the size of the legs.

‘Apparently cockroaches taste like shrimp, whereas beetles are bitter. And what I ate was very bitter,’ she continued, likening the taste to a crushed-up Tylenol.

Luckily, Tori didn’t get sick from the bug, but she says the experience was harrowing all the same. 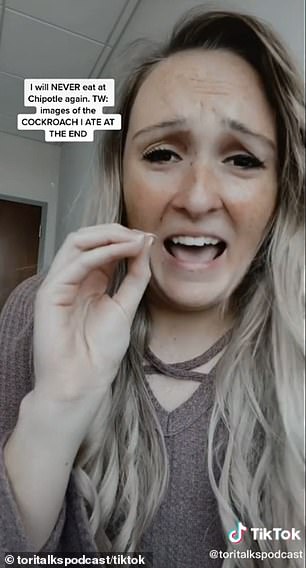 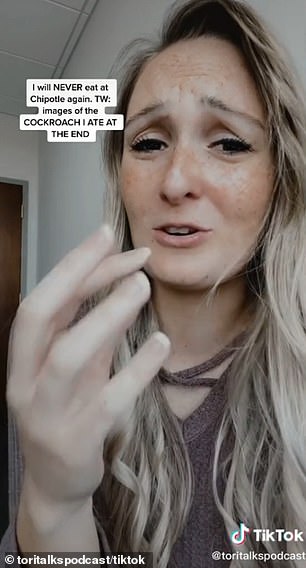 ‘Apparently cockroaches taste like shrimp, whereas beetles are bitter. And what I ate was very bitter,’ she continued, likening the taste to a crushed-up Tylenol

‘I didn’t throw up, I didn’t get sick, but it was very traumatic,’ she said.

She also isn’t satisfied with how Chipotle handled the matter, saying she ‘couldn’t get anything done, couldn’t get ahold of a manager’ and was ignored for a month after she filed a complaint on the company’s website.

Finally, this week, her video began to gain traction on TikTok, racking up over a million views — and that’s when someone from Chipotle reached out, offering her free meals for her troubles.

‘However, I’m not sure if I want to eat at Chipotle anymore,’ she said.