A 911 call has been released documenting a mother’s frightening experience of having a stranger jump on her car during a Black Lives Matter protest in Virginia last month, and her futile attempts to get police to help her.

On June 13, Tara Durant was driving with her 12-year-old daughter in the backseat in downtown Fredericksburg when she found herself trapped by a group of George Floyd protesters who were blocking Caroline and Hanover streets.

Unable to drive through the intersection because of the crowds, Durant called 911 at 7.34pm seeking assistance, only to be told that police ‘can’t do anything about it’ beyond monitoring the protest, which has been sanctioned by the city.

Tara Durant was driving in downtown Fredericksburg, Virginia, with her daughter on June 13 when she got caught in the middle of a Black Lives Matter protest (picture taken in the area)

Durant argues on the call that the protesters are not allowing her to get out, to which the emergency dispatcher replies, ‘Yeah, they’re allowed to do that per City Hall.’

The dispatcher suggests that Durant make her complaint to City Hall.

‘How do I get out of here? Durant presses. ‘I can’t go backwards.’

The dispatcher reiterates that police officers are not allowed to intervene, unless the caller is ‘hurt, or something.’

Durant tells the 911 operator that she cannot be expected to sit at the intersection all night with her daughter in the car.

‘Am I going to get arrested when I keep going? cause they’re gesturing…’ she says of the demonstrators.

The dispatcher warns Durant: ‘you can’t hit people with your car.’

Moments later, the situation escalates when Durant declares that the protesters are climbing on her car.

‘They’re on my car right now,’ she says.

The dispatcher continues to advocate patience, instructing the caller to slowly make her way out of the area without hitting anyone, and reiterating that police cannot help her because ‘it’s a sanctioned event.’ 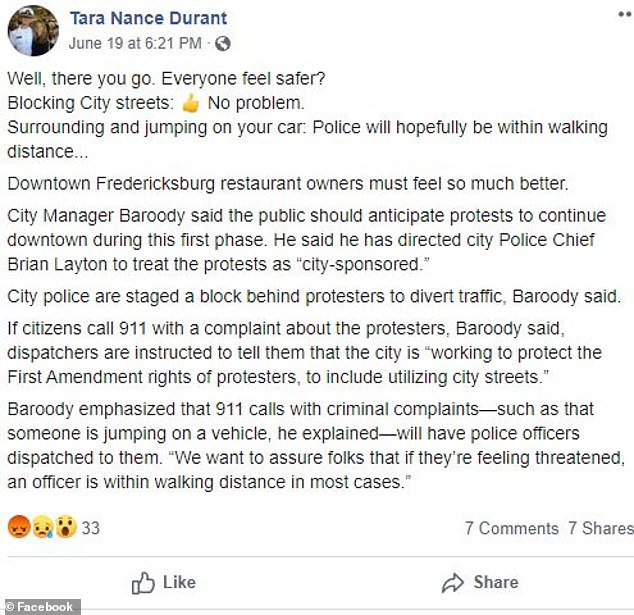 Durant posted a Facebook post, saying a protester jumped on her car and her pleas for help on a 911 call were brushed off

‘Get out of my car! You know, this is going to get dangerous. I got a kid here,’ Durant yells.

The dispatcher impassively suggests a second time that Durant ‘call up the City Hall and let them know about your frustrations.’

Sounding increasingly frantic and scared, Durant yells at the people in the street, ‘Get out of the way!’ 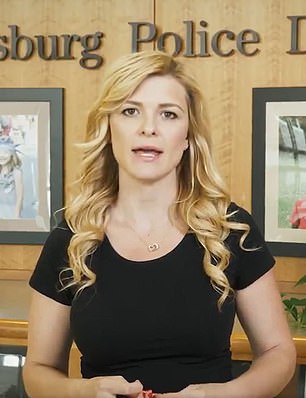 The dispatchers asks for the make and model of Durant’s car and tells her that she is going to let officers in the area know about her predicament, but towards the end of the call the driver says that she has managed to get out of the area.

In it, Sarah Kirkpatrick, public information officer for the agency, acknowledged that a protester had jumped on Durant’s vehicle, leaving the woman in fear for her safety and for the safety of her child.

‘Now, anyone who has heard this call can hear how frightened she was. Frightened for herself, frightened for her daughter,’ Kirkpatrick says in the video. ‘And, as a mother myself, I can only imagine the thoughts that were going through her head.’

According to the spokesperson, in the intervening weeks, police have had several conversations with Durant, have opened a criminal investigation to identify the person who jumped on her car, and have made ‘adjustments’ to the 911 communication center.

‘If a person dials 911 over a concern about demonstrators in the roadways, they will be notified that an officer is staged one block away – not only to divert traffic but also for their safety,’ Kirkpatrick said. ‘If you express concern for your safety, you can be certain that an officer will respond to assist you.’ 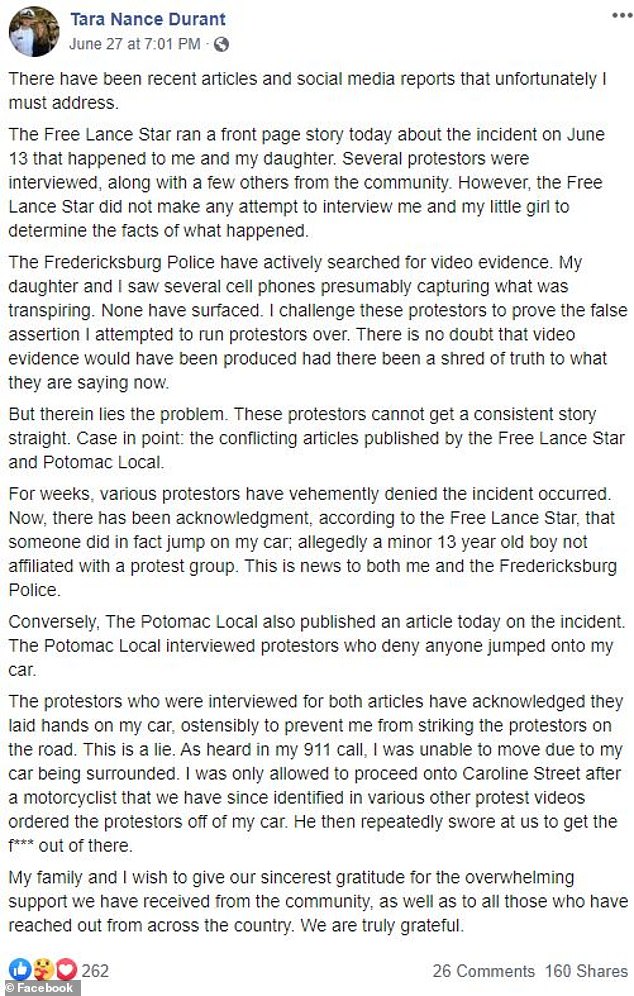 In an interview with Potomac Local News last week, 18-year-old Wesley Burton, one of the leaders of the June 13 protest, said he stood in front of Durant’s car to stop her from hitting anyone.

‘At most someone did have their hands on the car,’ Burton said.

Amaya Montgomery, a leader of the Melanin Cooperative of Fredericksburg protest group, told the outlet that Durant posed a threat to the demonstrators because she was driving into the crosswalk – a claim the woman has vehemently denied.

‘This is a lie,’ Durant wrote in a Facebook post on Saturday. ‘As heard in my 911 call, I was unable to move due to my car being surrounded. I was only allowed to proceed onto Caroline Street after a motorcyclist that we have since identified in various other protest videos ordered the protestors [sic] off of my car.

‘He then repeatedly swore at us to get the f*** out of there.’

Durant argued that had she made an attempt to run anyone over, there undoubtedly would have been video evidence of it.

‘The Fredericksburg Police have actively searched for video evidence. My daughter and I saw several cell phones presumably capturing what was transpiring. None have surfaced,’ she added. ‘I challenge these protestors to prove the false assertion I attempted to run protestors over.’

DailyMaill.com reached out to Durant on Friday for comment and was awaiting a response.