A woman who couldn’t get a plane’s tray table past her stomach two years ago has shared the emotional moment she was finally able to fasten an aircraft seatbelt without an extension for the first time in 15 years, having shed seven stone.

Trisha Lewis, 31, from Limerick, Ireland, weighed 26 stone at her heaviest, but was shocked into action two years ago after getting stuck behind the wheel of a vehicle on Christmas Day in 2016.

The executive head chef started her weight loss journey two months later – and is now ‘happier than she’s ever been’ at a size 22 and 19 stone.

To celebrate her accomplishment, Trisha took to Instagram on Monday and shared a touching clip capturing the moment she was able to securely fit into a plane seat – with the Spanish flight’s passengers loudly applauding her.

‘I felt relief as it meant that part of my life is in the past,’ she said. ‘I was 15 the last time I didn’t need an extension.’

Trisha Lewis (pictured left before her weight loss at 26 stone in 2017, and right after at 19 stone in 2019) from Limerick, Ireland, lost a whopping seven stone in two years

The video follows footage taken by Trisha three years earlier, when she failed to push a plane’s tray table past her stomach and had two people sitting beside her request to move for more room.

‘I was travelling to Rome,’ Trisha explained. ‘I always sat separate from my friends so they didn’t see me ask for the extension.

‘On this flight, the two people beside me requested to be moved as they were upset that I was spilling over.’

She added: ‘I do understand where they were coming from as they paid for a flight too. But I felt awful – emotional, embarrassment and shame. I knew I was too fat from my own doing but I didn’t know how to tackle it.’

On February 2017, Trisha finally decided to make a change after her sister texted her to see if she would try to make this ‘her day’. 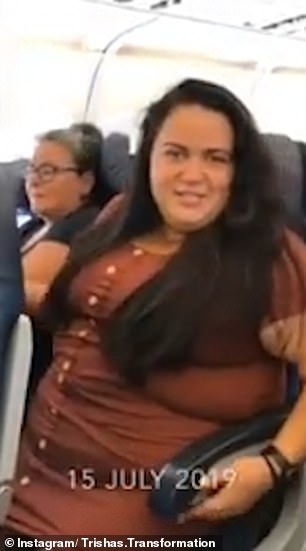 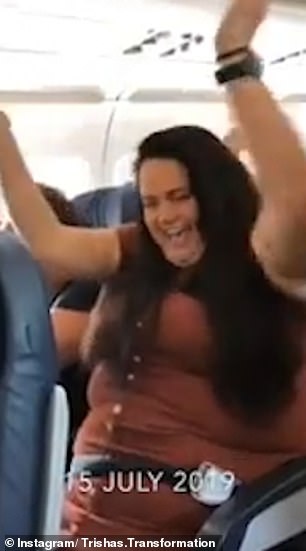 To celebrate her accomplishment, Trisha took to Instagram on Monday and shared a touching clip capturing the moment she was finally able to securely fit into a plane seat (pictured) 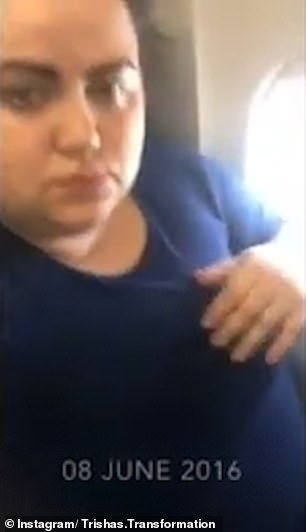 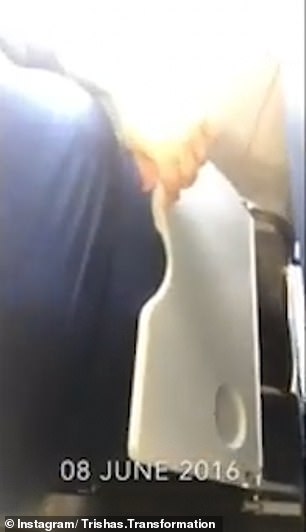 The video follows footage (pictured) taken by Trisha three years earlier, when she failed to push a plane’s tray table past her stomach

‘I text her back and for the first time I was honest and I told her I had given up,’ Trisha explained. ‘I was turning 30 in March and all I had done was get fatter. I wanted my family to move on and forget about me.’

However, Trisha revealed that within minutes, she had a ‘fight or flight moment’.

‘I got out of bed and I drove to Cork and before I knew it I was standing crying at the desk of Dennehys gym asking for help,’ she said.

‘I sat in front of personal trainer Emma Ryan and I cried my eyes out. I didn’t want material things, I didn’t want clothes, I just wanted to be happy again.’ 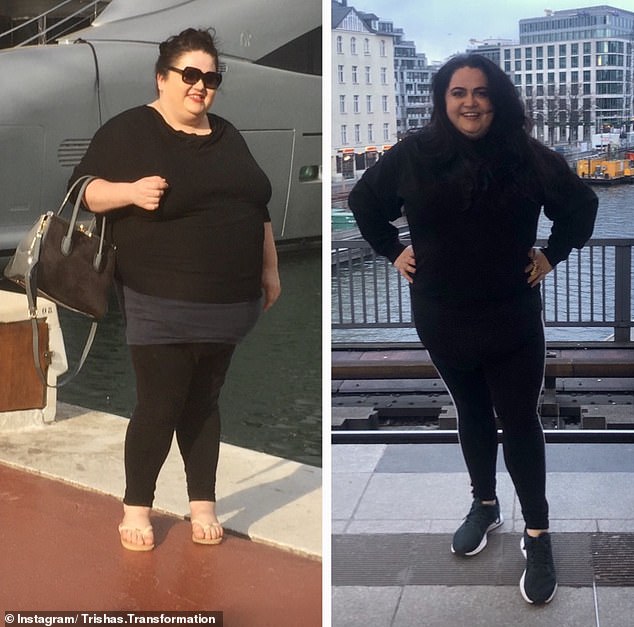 Weighing 26 stone at her peak (pictured left), the executive head chef at Jacobs on the Mall in Cork, is now ‘happier than she’s ever been’ (pictured right) 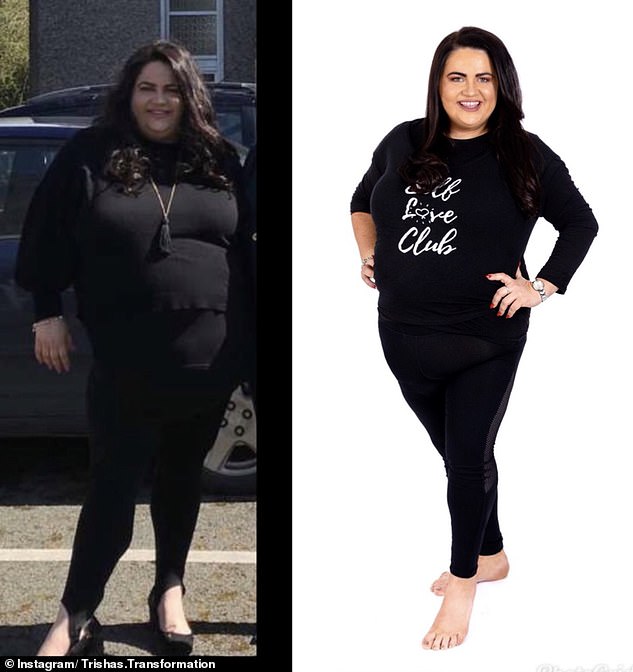 Despite her family trying everything they could to help, Trisha (pictured right, before, and left, after her weight loss) said: ‘The only person than can help you is you. You can bring a horse to water but you can’t make it drink’

She continued: ‘I wanted to smile. I wanted to stop feeling like I was going to die from being overweight. Some nights I went to sleep terrified my heart would stop, other nights I often thought it would be easier to not wake up.’

Despite her family trying everything they could to help, Trisha said: ‘The only person that can help you is you. You can bring a horse to water but you can’t make it drink.’

After much determination and hard work, Trisha now weighs 19 stone and says she feels ‘amazing’, despite the ‘long road ahead’.

‘I’ve got to get skin removal surgery, I’ll have to get boob jobs, but it’s all part of the craic. I don’t promote embracing obesity but I do promote loving who you are while going on a journey for health.’

After a lot of hard work, Trisha now weighs 19 stone (pictured left and right before her transformation) and says she feels ‘amazing’, despite the ‘long road ahead’ 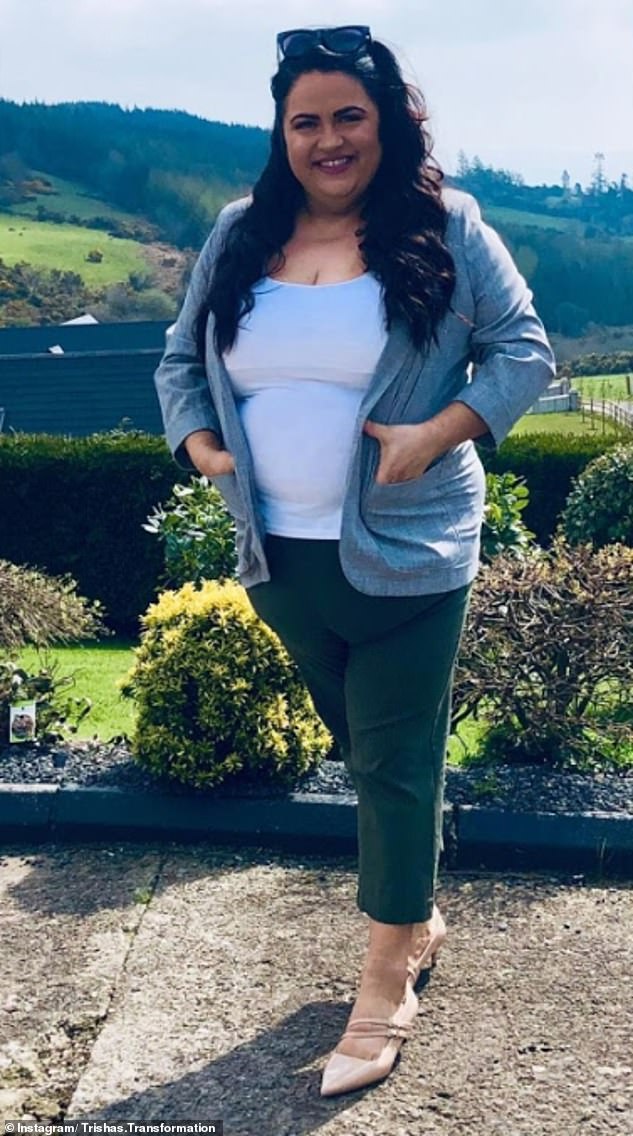 Speaking about her triumphant flight to Spain on Monday, Trisha (pictured now) said: ‘I felt relief as it meant that part of my life is in the past. I was 15 the last time I didn’t need an extension’

Trisha’s diet before her weight loss consisted of binge eating convenient meals – having not done a weekly or monthly shop in years – but now involves more healthy,  flavoursome food.

The devoted aunt also admitted that her two young godchildren, Jack and Danny, are her constant motivation to lose weight as she made a list of promises to them.

‘My two small men need their Trisha to lead the way and be the example they deserve,’ she said. ‘They love me no matter what size I am.

‘I just want to show them that no matter what obstacle comes up you can beat it. My main advice to anyone starting is to not be ashamed. 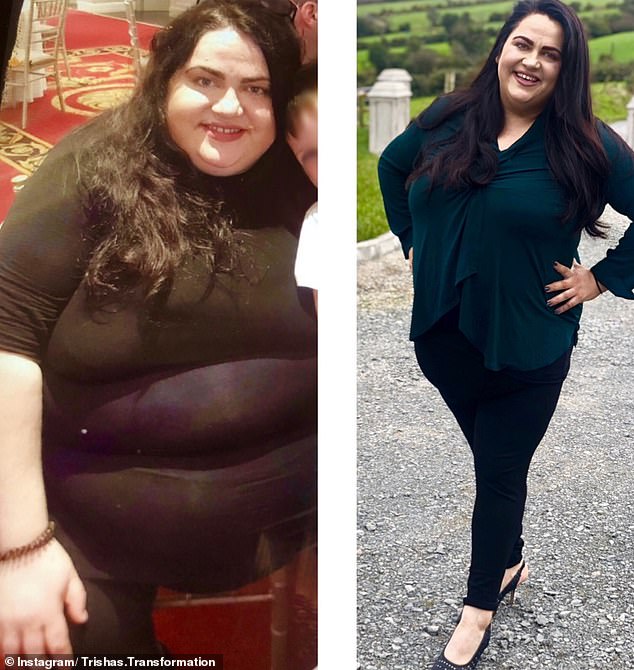 Trisha’s diet before her weight loss (pictured left) consisted of binge-eating convenient meals – having not done a weekly or monthly shop in years – but now (pictured right) it involves more healthy, flavoursome food

‘You have done nothing wrong. The only person you’ve hurt is yourself. Start small and don’t look ahead. Take it day by day. Step by step. If you mess up. Just reset.

‘Forgive yourself and don’t look at the gym as a chore. Fitness to me now is fun as opposed to a weight loss tool. Don’t think you’re too big for the gym, it’s the best place for you.

‘It’s the happiest place I have walked into and no one has ever stared or made a comment. The best advice I have is, you have tried everything except not giving up!’