An Indonesian woman held for two years on suspicion of killing North Korean leader Kim Jong Un’s half brother was freed on Monday after Malaysian prosecutors unexpectedly dropped the murder charge against her.

Siti Aisyah cried and hugged her co-defendant, Doan Thi Huong, before leaving the courtroom and being ushered away in an embassy car.

‘I feel very happy,’ she said later at a news conference at the Indonesian Embassy. ‘I didn’t expect that today will be my freedom day.’

Malaysia’s attorney general released a letter saying that ‘good relations’ between his country and Indonesia had led to Aisyah’s release after lobbying by diplomats.

Meanwhile Huong, who is Vietnamese, remains on trial.

Siti Aisyah, one of the two women on trial for the murder of Kim Jong-un’s half brother Kim Jong-nam, has been released after the charge against her was dropped 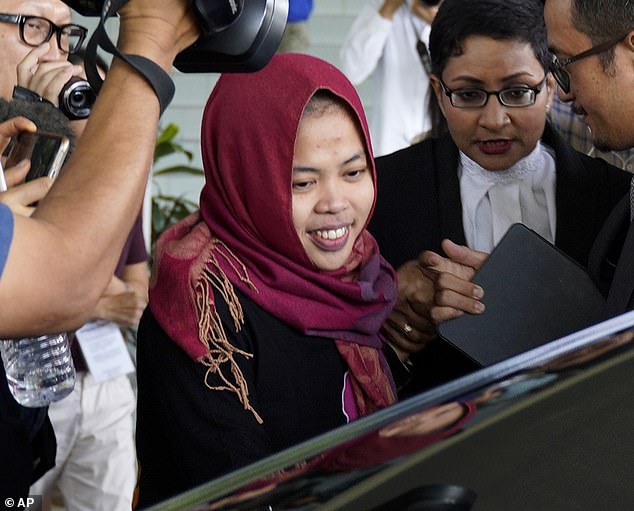 Aisyah said she was shocked but ‘very happy’ at the news, adding that she was only told on Monday morning that she would be freed later that day 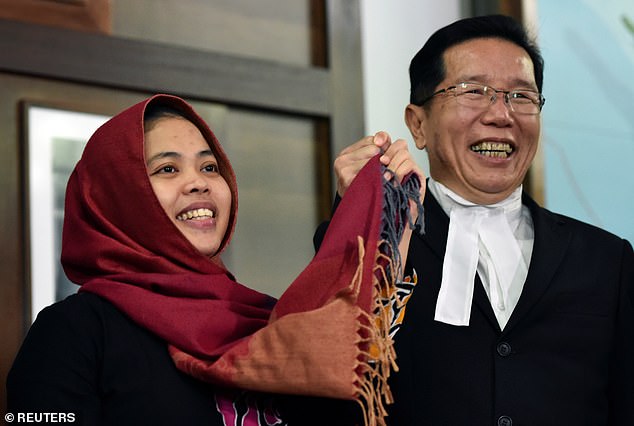 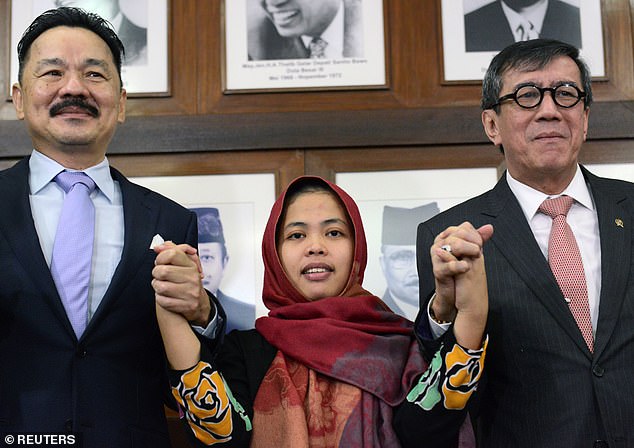 The two young women were accused of smearing VX nerve agent on Kim Jong Nam’s face in an airport terminal in Kuala Lumpur in February 2017.

They have said they thought they were taking part in a prank for a TV show.

The High Court judge discharged Aisyah without an acquittal after prosecutors applied to drop the murder charge against her.

Taking this legal route means prosecutors will have the chance to charge Aisyah a second time, but say there are no plans to do so at the moment.

Aisyah will now been allowed to return to her family in Indonesia, but it is not clear whether the government will be providing security for her in case North Korea attempts to take revenge on its stooge assassin.

In the town of Sindangsari, where Aisyah is from her aunt was gearing up for a party to welcome back her 27-year-old niece.

‘Thank God. I want to say a thousand “thank you’s” if it’s really true that she has been freed,’ Aisyah’s aunt Darmi, who goes by one name, said.

‘They should bring her here straight away because she’s not guilty. We’ve heard the news and we’re so happy. We’re getting a celebration ready!

‘Thanks to everyone who took care of my niece.’

Aisyah’s parents were in the capital Jakarta Monday to await their daughter’s return, after a flurry of diplomatic efforts between the two Southeast Asian neighbours.

The family’s neighbour Darsinah recalled watching Aisyah grow up as an ‘innocent and naive’ little girl.

‘Never made a fuss. Very obedient and polite,’ said the woman, who like many Indonesians goes by one name. ‘I’m happy, so very happy.’

Aisyah herself said she doubted that she would ever get home, telling reporters: ‘I had already surrendered myself to God.

‘It was the support of my family – my mother, my father – and the embassy, that kept me going. Now I want to see them.’ 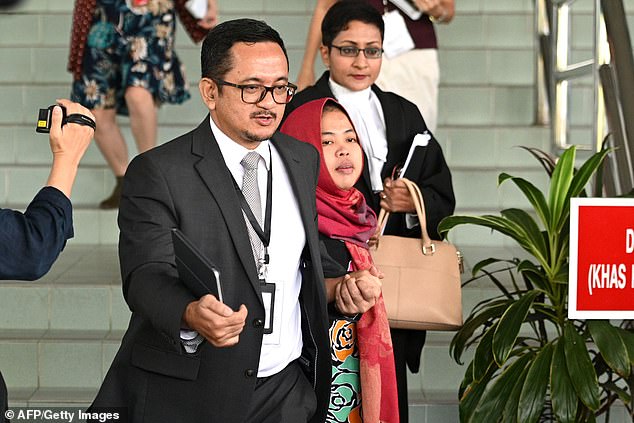 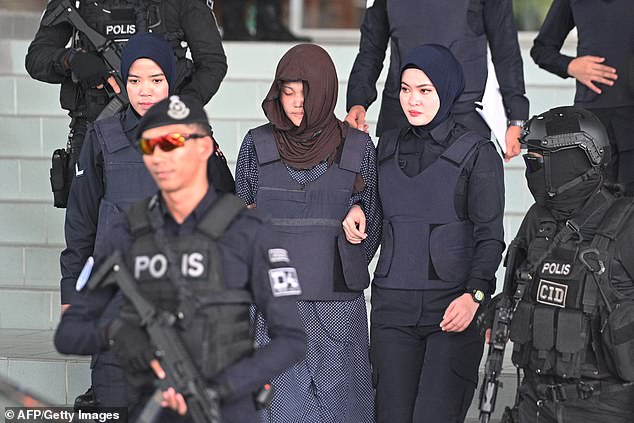 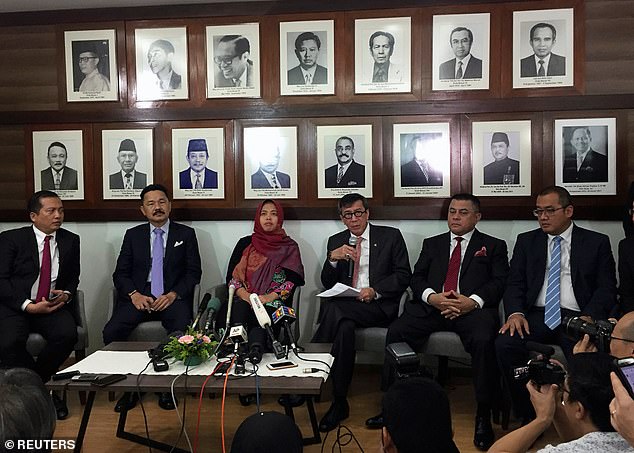 Aisyah has consistently denied murdering Kim, saying that she thought she was taking part in a prank game show after being fooled by North Korean intelligence agents

Asked if she would ever return to Malaysia, the woman replied: ‘Who knows – but I don’t want to be here right now … I want to stay in Indonesia.’

Aisyah and Huong had been the only suspects in custody after four North Korean suspects fled the country the same morning Kim was killed.

The trial will resume Thursday, with prosecutors expected to reply to a request by Huong’s lawyers asking the government to withdraw the charges against her.

Indonesian officials mounted a major diplomatic effort to free Aisyah, which included pressure from the president.

Indonesia often makes concerted diplomatic efforts to free its citizens detained overseas, particularly those who may face the death penalty.

Speaking at the Indonesian embassy in Malaysia, Indonesian Justice Minister Yasonna Laoly reeled off a list of figures in government — from President Joko Widodo to the foreign minister — who had pushed for Aisyah’s release.

The future looked much more bleak for Huong however, who still stands accused of murder despite her case being almost identical to Aisyah’s.

“I do not know what will happen to me now. I am innocent – please pray for me,” the 30-year-old said.

Her testimony Monday was adjourned and her lawyers said they would apply to have her murder charge dropped as well.

In the northern Vietnamese province of Nam Dinh, her father Doan Van Thanh expressed shock his daughter was still behind bars and called for her release. 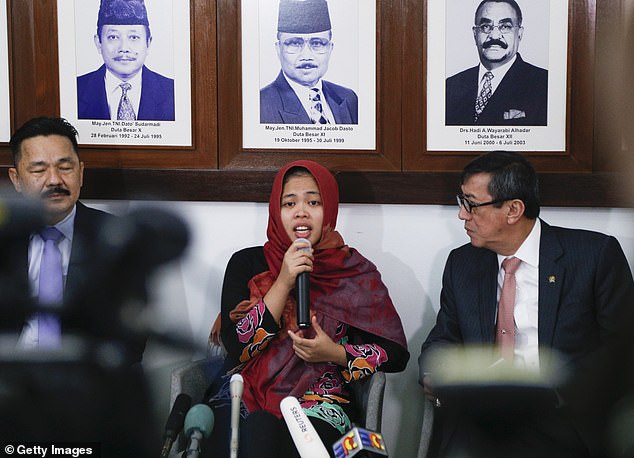 Siti Aisyah spoke to reporters in Kuala Lumpur following her release, saying that she is excited to return to her home country, where she is expected to arrive later today 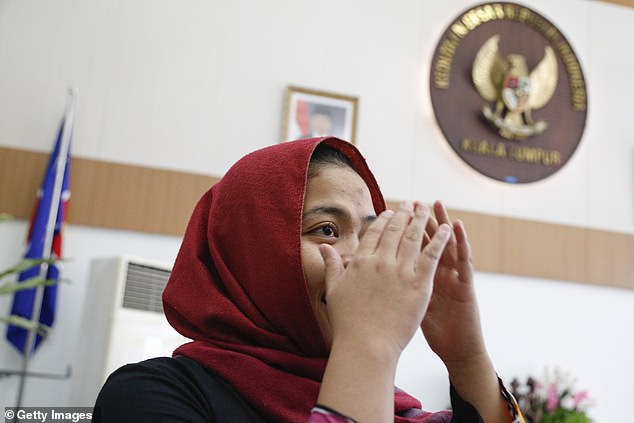 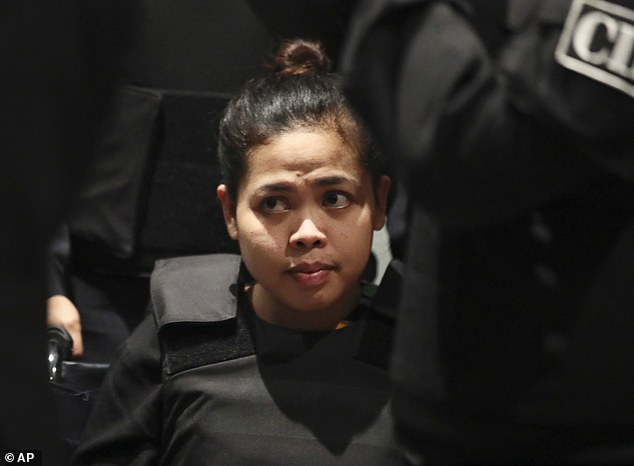 Aisyah has been in custody for two years accused of the murder, which happened at Kuala Lumpur airport in February 2017 (pictured in October 2017)

‘Why did they release the Indonesian girl without releasing my daughter?’ he said.

Vietnam generally does not get publicly involved in individual criminal cases overseas, and foreign affairs officials did not respond to a request for comment.

A murder conviction carries a mandatory penalty of death by hanging in Malaysia.

It said Aisyah, a migrant worker, believed that she was part of a reality TV show and never had any intention of killing Kim.

The ministry said that over the past two years, Aisyah’s plight was raised in ‘every bilateral Indonesia-Malaysia meeting,’ including at the president’s level, the vice president’s level and in regular meetings of the foreign minister and other ministers with their Malaysian counterparts.

Aisyah’s release comes just a month before Indonesia’s general election and is seen as a boost to President Joko Widodo, who is seeking re-election.

Aisyah thanked Widodo and his government for helping secure her release. Officials said she was expected to fly back to Jakarta, Indonesia’s capital, later Monday.

Wearing a red headscarf and a black flowery traditional dress, Aisyah was composed during the news conference.

She said that she was well treated in prison and received plenty of encouragement, but that she was eager to meet her family again.

Meanwhile, Huong said she was shocked by the development. 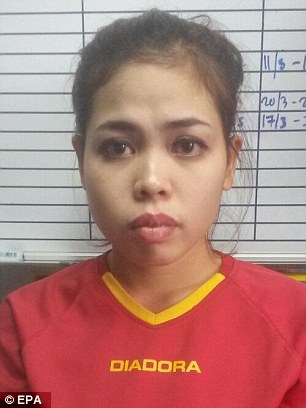 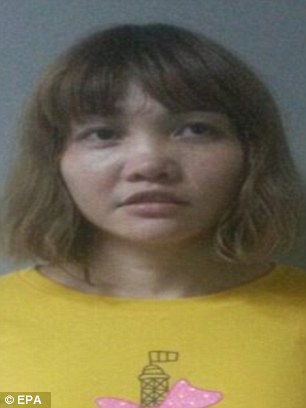 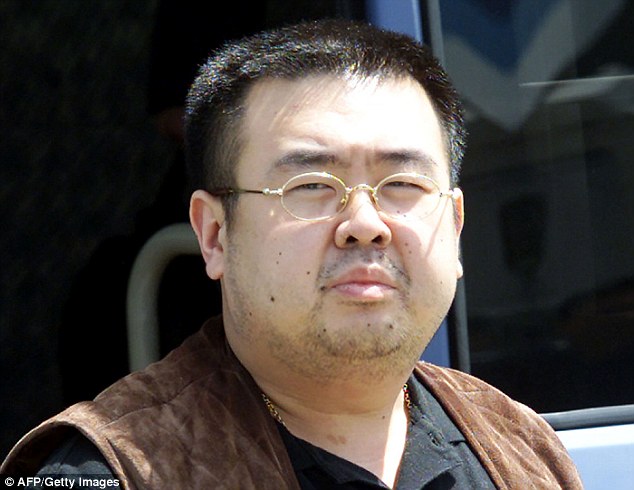 It is thought that Kim was assassinated after his half-brother, who had just taken over rule of North Korea, uncovered a plot to replace him with his sibling 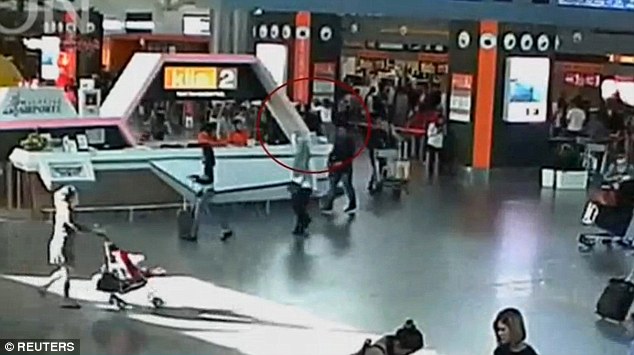 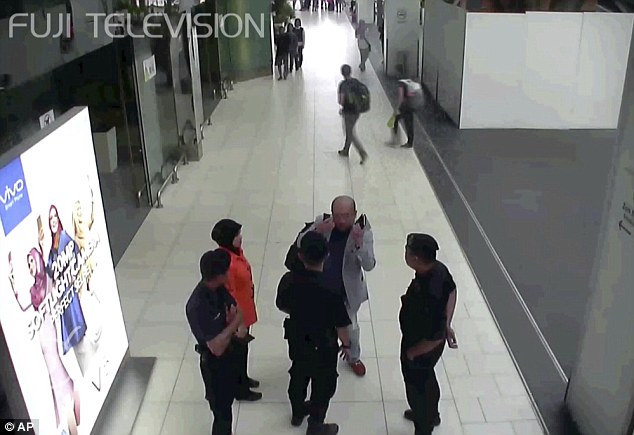 ‘I am in shock. My mind is blank,’ a distraught Huong told reporters through a translator after Aisyah left.

Huong’s lawyer Hisyam Teh Poh Teik said Huong felt Aisyah’s discharge was unfair to her as the judge last year had found sufficient evidence to continue the murder trial against them.

‘She is entitled to the same kind of consideration as Aisyah,’ he said. ‘We are making representation to the attorney general for Doan to be taken equally … there must be justice.’

A High Court judge last August had found there was enough evidence to infer Aisyah, Huong and the four missing North Koreans had engaged in a ‘well-planned conspiracy’ to kill Kim Jong Nam.

The defense phase of the trial had been scheduled to start in January but was delayed until Monday.

Lawyers for the women have previously said that they were pawns in a political assassination with clear links to the North Korean Embassy in Kuala Lumpur, and that the prosecution failed to show the women had any intention to kill.

Intent to kill is crucial to a murder charge under Malaysian law.

Malaysian officials have never officially accused North Korea and have made it clear they don’t want the trial politicized.

Kim was the eldest son in the current generation of North Korea’s ruling family. He had been living abroad for years but could have been seen as a threat to Kim Jong Un’s rule. 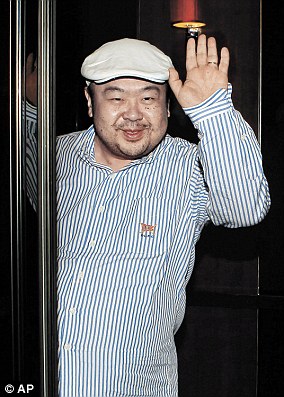 Malaysian prosecutors Monday unexpectedly dropped a murder charge against an Indonesian woman who had been accused of assassinating the half-brother of North Korea’s leader.

Siti Aisyah walked free from a court outside Kuala Lumpur after prosecutors withdrew the charge without giving any reason. She was accused alongside Doan Thi Huong from Vietnam, who remains on trial, of the brazen murder of Kim Jong Nam at a Malaysian airport in February 2017.

Here is a timeline of key events in the killing:

Seoul points the finger at its northern neighbour and says it was a political hit aimed at weeding out potential rivals to North Korean leader Kim Jong Un.

Malaysian detectives track down two migrant women — one Vietnamese and one Indonesian — who they say are seen on CCTV carrying out the attack.

The two women, who are eventually charged with murder, say they had been paid to carry out what they thought was a prank for a reality TV show.

An autopsy reveals Kim died from exposure to the VX nerve agent, an artificial chemical so deadly it is banned under international treaty and classified by the UN as a weapon of mass destruction.

Kuala Lumpur arrests North Korean citizen Ri Jong Chol in connection with the murder. Over the following days investigators say diplomats and airline employees from the isolated regime are also wanted for questioning. All are holed up at the North Korean embassy or have already left the country.

North Korea pours scorn on what it calls “absurd” claims that VX was used, saying South Korea and the US are mounting a smear campaign against it. 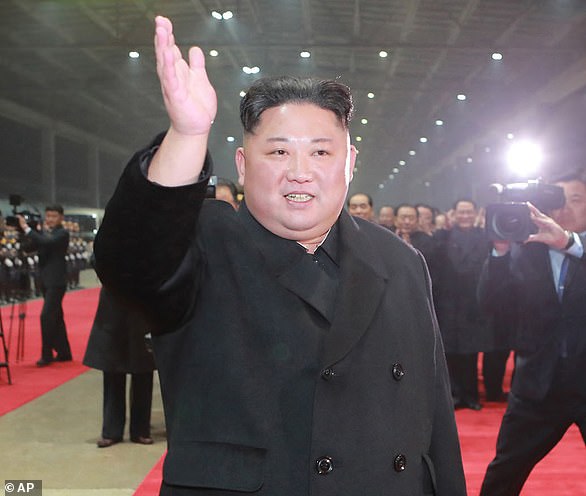 Pyongyang insists the dead man was called Kim Chol and demands his body be returned. Investigators refuse to release the corpse.

Tensions escalate after North Korea bans all Malaysians from leaving Pyongyang. Malaysia retaliates and the international community calls for calm amid allegations of hostage holding.

In early March, Ri Jong Chol is released from custody and deported from Malaysia. Frustrated Malaysian police say they believed he was involved in the plot but lacked evidence to prove it.

At the end of the month, Malaysia’s then-prime minister Najib Razak announces an agreement has been reached to return the Kim Jong Nam’s body to North Korea. Nine Malaysians stuck in Pyongyang will be free to leave and North Koreans in Kuala Lumpur will be allowed to go home.

In October, the two women go on trial over the murder. They maintain their innocence.

Four men formally accused on a charge sheet of plotting with the women to murder Kim Jong Nam are identified by a police officer as North Koreans who fled Malaysia immediately after the assassination.

The women’s lawyers insist the North Koreans are the real masterminds.