A young woman was left fighting for her life after hospital doctors failed to give her blood thinning medication and compression socks.

Rebecca Lord, 30, was ‘half an hour away from dying’ from multiple blood clots that had formed on her lungs.

She had been hospitalised after suffering a back injury and was put on bed rest.

Due to her parents’ medical background, she knew the importance of wearing compression socks and taking drugs to stop her blood from clotting.

But the administrator, from Farnborough, Hampshire, said her multiple requests to ward staff for a pair fell on deaf ears.

Less than 48 hours after being discharged, her life was hanging in the balance as she struggled to breathe.

Tests revealed three clots had formed on her lungs, which could have been avoided had doctors given her the special socks and medication she had requested.

Rebecca, who has been left traumatised and has to wear dentures because of ongoing problems as a result, said: ‘I understand hospitals are busy, but staff still had a job to do. One little mistake had huge consequences for me.

‘It just makes me wonder what other mistakes they’re making.’

Frimley Health NHS Foundation Trust have now admitted liability and Rebecca – who is speaking out to spare others her ordeal – has been awarded compensation.

‘It’s never been about money for me, it’s about raising awareness,’ she insisted.

Deep vein thrombosis (DVT) is a blood clot that develops within a deep vein in the body, usually in the leg.

It can cause pain and swelling in the leg and may lead to complications such as pulmonary embolism – a serious condition that occurs when a piece of blood clot breaks off into the bloodstream and blocks one of the blood vessels in the lungs. 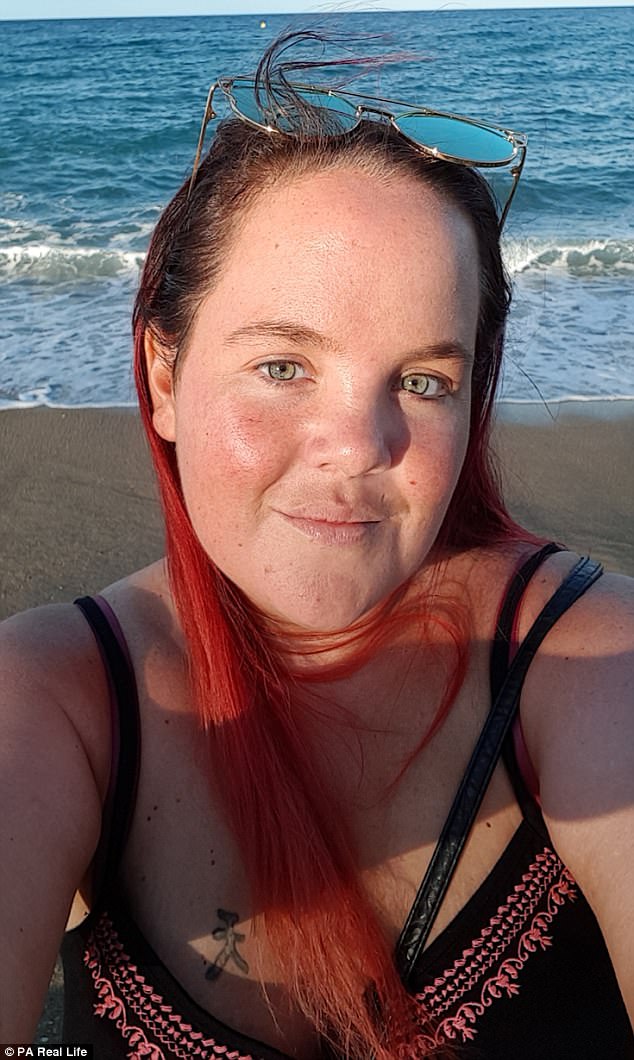 Guidelines were not followed

Rebecca’s nightmare began when she was struck down with severe back pain completely out of the blue, in early September 2014.

Admitted to Frimley Park Hospital in Camberley, Surrey, she was found to have two slipped discs in her spine.

Put on bed rest, her parents advised her that she needed blood thinning medication or compression socks to guard against developing blood clots.

‘If I was up and mobile, it wouldn’t have been an issue,’ said Rebecca.

NHS guidelines say that anyone can get blood clots, but being unable to move around much puts people at increased risk.

‘If it wasn’t for Mum and Dad, I wouldn’t have realised the dangers of not having the medicine and stockings.

‘I asked for them several times, but I was never given anything. I kept being told by the nurses that they would speak to another member of staff, but nothing ever came of it.

‘It made me angry, I felt like I wasn’t being listened to.’

‘I could barely breathe’

Discharged five days later to wait for a physiotherapy referral, Rebecca was still in agony.

But she struggled doing her job in a phone store and over the next few days so she went back to the hospital.

During her second five-day stay, again on bed rest, she claims to have asked once again for stockings and medication – but to no avail.

On 22 September, she was discharged. But, the next day, she began experiencing pain in her chest and upper back.

In some cases, there may be no symptoms of DVT. If symptoms do occur they can include:

DVT usually (although not always) affects one leg. The pain may be worse when you bend your foot upward towards your knee.

Both DVT and pulmonary embolism require urgent investigation and treatment.

‘I was at home trying to get comfy, when I felt pain in my upper back,’ she said. ‘I thought it was muscular.

‘The next day, I was hit by pain I can’t even describe. It felt like the heaviest thing in the world was sitting on my chest and like my lungs were being squeezed. I could barely breathe.’

Half an hour from death

Normally, Rebecca locks her bedroom door but luckily, on this occasion, she left it open.

‘I called the house phone from my mobile and tried my best to say I needed help,’ she said.

‘Mum came in, took one look at me and phoned an ambulance.’

Raced back to Frimley Park Hospital for a third time, Rebecca was terrified she would die.

Medics ran a series of tests, including a chest x-ray and an echocardiogram – a type of ultrasound examination of the heart and its nearby blood vessels.

Then, a blood test revealed she had three clots in her lungs.

Immediately put on oxygen, Rebecca was then given the anti-coagulant medicines she had been without for weeks.

‘I later found out I’d been half an hour from death. I was so shocked,’ she said.

‘Once I got my head round the fact I was now going to live, I kept thinking, “If I’d just been given what I’d asked for, I wouldn’t be here now.”

‘I struggled to get my life back’

Finally allowed home on 1 October 2014, Rebecca remained on warfarin and heparin blood thinning drugs for months, as well as having weekly blood tests to monitor her progress.

She was allowed to walk for more than 30 minutes a day to reduce the risk of further clots forming.

‘I really struggled to get my life back on track. I had to give up my job too, as I couldn’t be on my feet all day anymore.

‘Now I work in admin, which is far less physically demanding.’ 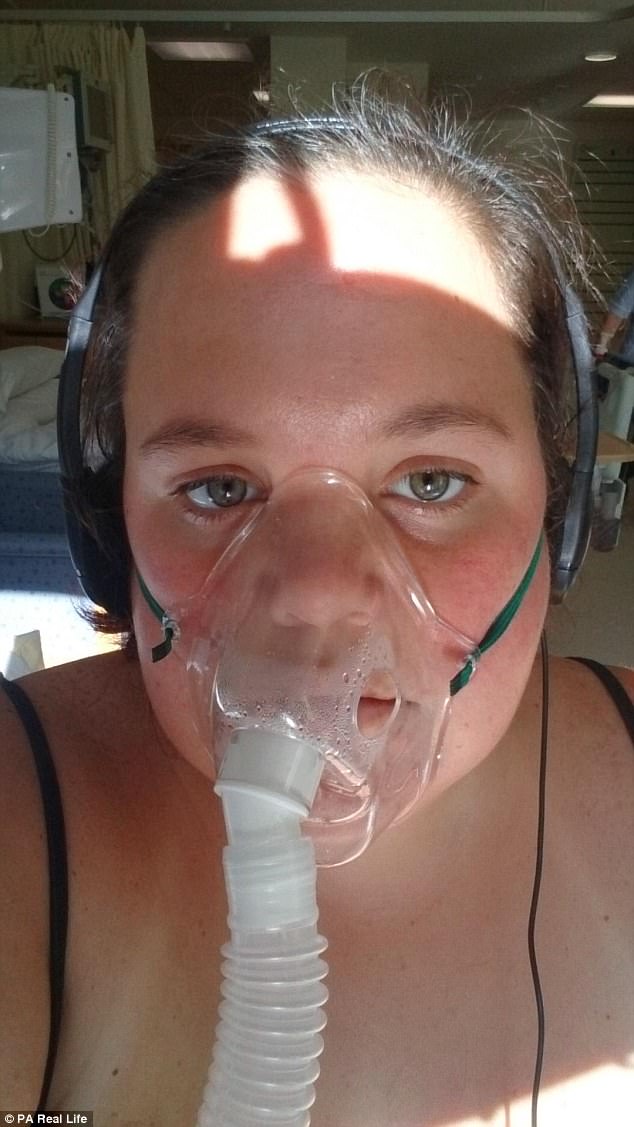 In time, Rebecca contacted Fletchers solicitors in Southport, Merseyside, who advised her to take action against the NHS trust.

Now, she hopes to put her compensation toward costs of her ongoing care, including finishing dental work that she was partway through when the tragedy struck.

She explained: ‘I needed root canal surgery, but I had to put it on hold, as I couldn’t do it while on blood thinners.

‘Because it was left, my teeth ended up rotting and I had to have 11 removed. I’m wearing NHS dentures now, but I’d like to get some better ones.

‘The whole ordeal has had a huge impact on my mental health, too. I feel really traumatised by the whole incident and fear this will never leave me.’

Kate Goodman, a lawyer from Fletchers Solicitors who worked on the case, said: ‘This has been an incredibly traumatic ordeal for Rebecca, which is still continuing to have a huge impact on her life.

‘Although failing to provide compression socks may seem like a small mistake, Rebecca’s case just goes to show the devastating consequences medical errors can have on a patient. For Rebecca, this error could have cost her life.’

A spokesperson for Frimley Health NHS Foundation Trust said: ‘We have apologised to the patient for our failure to perform an appropriate venous thromboembolism (VTE) risk assessment and to provide treatment that may have prevented the blood clots.

‘Since September 2014 we have significantly improved our assessment of patients for their VTE risk. The latest figures show that 99.6 per cent of patients admitted to the hospital are risk assessed for VTE, which is much better than the 95 per cent national target.’