Woman, 21, dies after two cars collide head-on in a horror crash that left four others injured

By Aap and Mary Mrad For Daily Mail Australia

A woman has died and four other people have been taken to hospital after two cars collided early on Sunday morning.

Police attended the Berkshire Park crash scene in Sydney’s northwest just after 1.15am.

Three women had to be freed from one car, with police and witnesses performing CPR on the 21-year-old driver. She died at the scene.

A 21-year-old women died after a head-on car crash at Berkshire Park just after 1.15am on Sunday 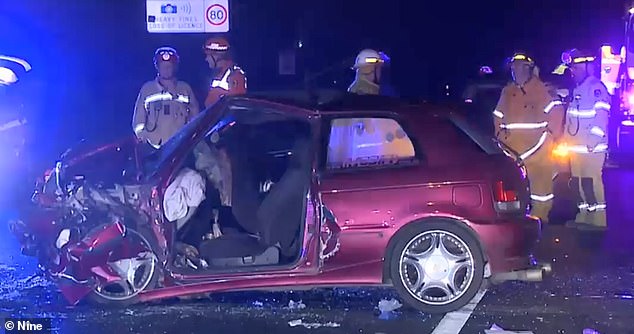 Her two passengers and a man, who was freed from the other car, were taken to hospital with injuries.

A second man was airlifted to Westmead Hospital in a serious but stable condition.

A 22-year-old woman from Carnes Hill was stopped after she attempted to turn right into the scene.

She returned positive to a breath test and was taken to Windsor Police Station.

The woman was charged with drive with low-range PCA, and drive while licence suspended and will appear at Windsor Local Court.