That’s fowl! Woman discovers green flesh inside her Coles roast chicken – but the supermarket giant claims the meat is fine and provides a bizarre explanation for the sickening sight

A woman has been left shocked when she found green-coloured flesh inside a roast chicken she bought from a Coles supermarket.

Kylie Mason bought the chicken from the Lithgow branch of Coles in New South Wales on Tuesday evening. She noticed the discolouration after bringing the chicken home and slicing it open.

Ms Mason took to Facebook to complain about the strangely-coloured meat.

‘Thought I’ll do a baked chook for dinner last night, unfortunately we couldn’t eat it,’ she posted on Coles’ Facebook page, alongside a picture of her purchase.

Other users were equally disgusted by the chicken. One commented ‘YUK….!!!’ whilst another joked ‘That’s fowl’.

Coles claim that the chicken would still have been safe to eat. In a comment to Kylie, the supermarket accounted for the off-putting green colour by explaining that the bird had ‘flapped its wings too much’ whilst it was alive.

The comment explained that the green colouring was caused by oxygen deficiency in the muscle, called pectoral myopathy (DPM) and that it would not be ‘harmful’ to eat.

Despite this the supermarket offered her a full refund of the bird as it did not conform to their ‘strict quality standards’.

Ms Mason later commented that the situation had been ‘rectified’ after she had spoken to a staff member from Coles Lithgow.

Daily Mail Australia has reached out to Coles for comment. 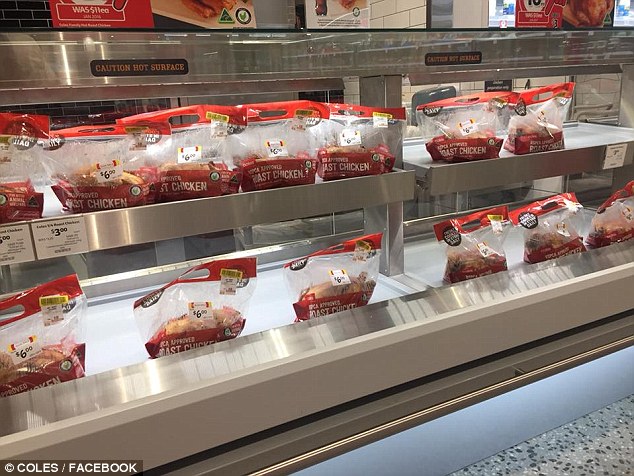