Woman eats nothing but Kylie Jenner recipes for 48 hours

As is customary for any member of the Kardashian clan, Kylie Jenner shares nearly every facet of her life with her many, many followers.

But one passion of Kylie’s that has attracted comparatively less attention is her love of cooking. So, in her latest video, YouTuber Candace Lowry, 25, decided to give Kylie’s foodie leanings a day in the sun by living purely off her various recipes for 48 hours.

‘The reason why I say 48 hours is because she has only made enough recipes for 48 hours!’ Candace explains in the intro, describing the list of meals as ‘simple’ and ‘not at all what I expected,’ being mostly made up of carbs and meat.

Taking it on: YouTuber Candace Lowry lives purely off of Kylie Jenner’s favorite recipes for two days in her new video 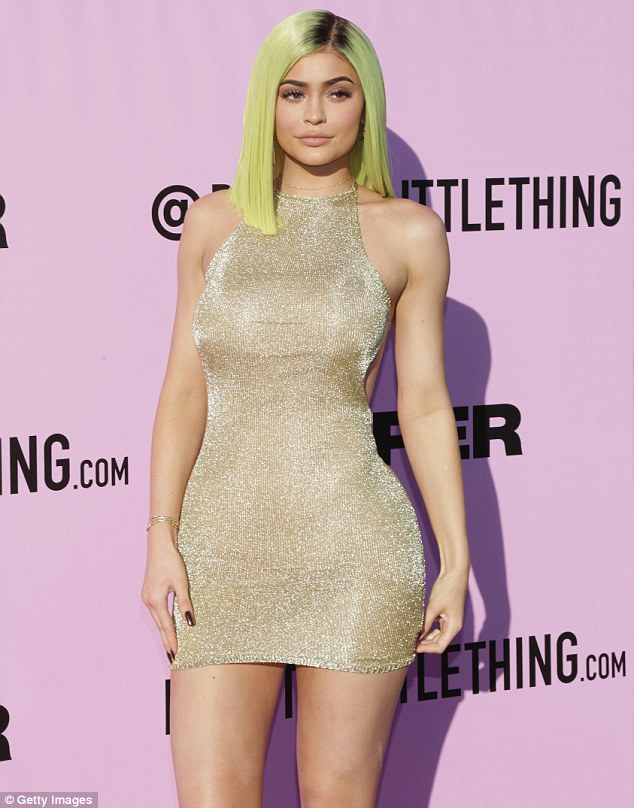 Many talents: Kylie has shared a number of recipes on her Snapchat and app that have had fans ‘freaking out’ 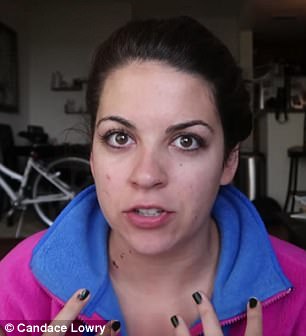 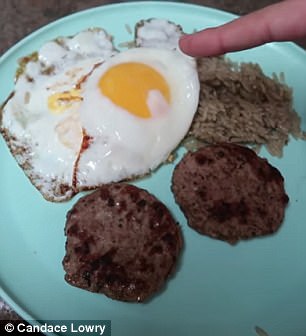 First steps: The challenge starts with ‘Kylie’s go-to breakfast’ made up of an egg, rice and Jennie-O sausage

Candace reveals that she felt like she wanted to take on the challenge after seeing how ‘nuts’ Kylie’s fans go when she reveals a recipe, though questions ‘how do you not have hypertension’ after viewing the meals’ nutritional content.

‘This girl is literally adding butter and garlic salt to a ramen and people’s faces are melting off!’ she says.

‘So maybe it’s worth the hype, maybe it’s not, but everyone loves to see what she eats and I guess I’m jumping on that train.’

Candace starts her first day with ‘Kylie’s go-to breakfast’, made up of Jennie-O sausage, rice and an egg. The final product adds up to 100 per cent of Candace’s daily amount of cholesterol and half of her sodium intake, totaling 423 calories. 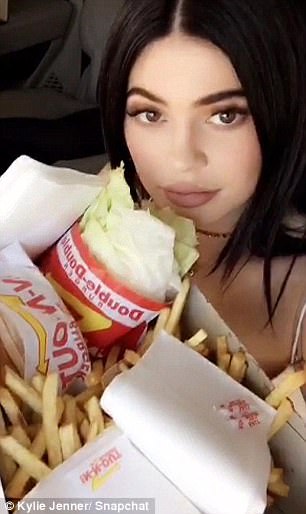 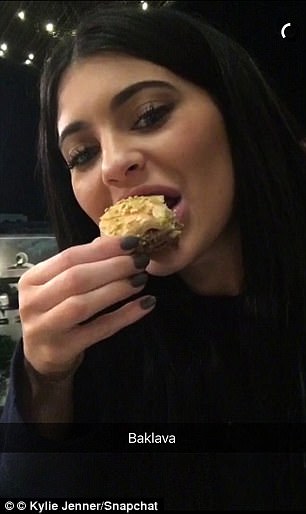 Munching away: The recipes in general are quite calorific and leave Candace wondering about Kylie’s blood pressure 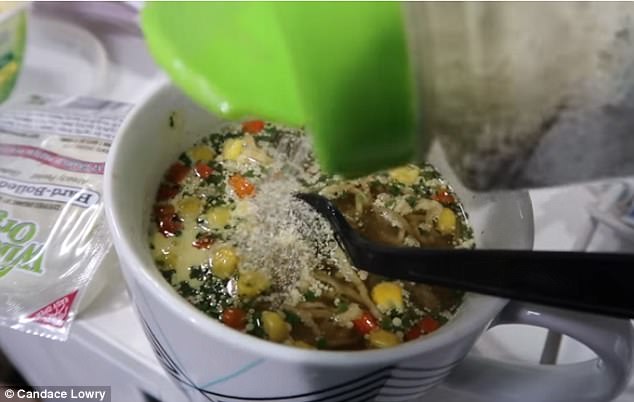 Salt on salt: For lunch on day one, Candace dumps some garlic salt and butter into ramen 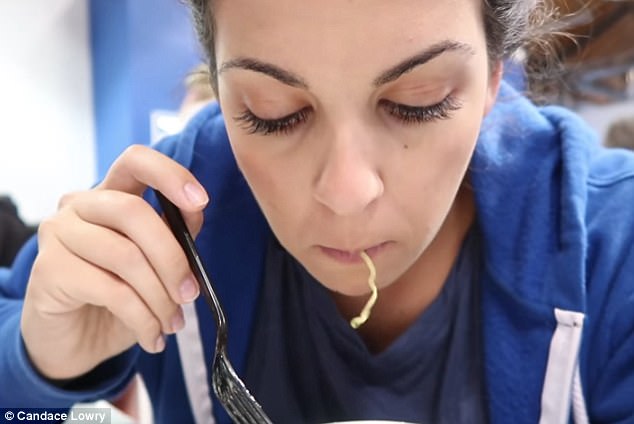 Not bad: She declares that she is ‘not mad’ as she eats her lunch, musing that it’s hard to hate anything ‘swimming in butter’ 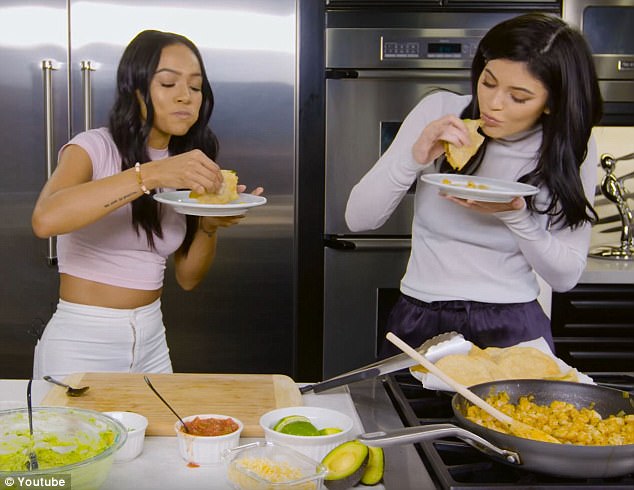 A favorite: Kylie claims to eat her shrimp tacos almost every single day

While she says the breakfast feels like ‘a rock’ in her stomach as she heads to work, Candace claims she ‘can’t complain’ because the meal was all-in-all quite tasty.

In the office she tests out the famous Kylie-approved ramen recipe for lunch, grabbing a small cup of noodles, adding a hunk of butter, a sprinkling of garlic salt and a hard-boiled egg.

While the meal is a less extravagant 216 calories, it does contain more than 1,500mg of sodium.

‘I’m not mad,’ she says as she takes her first bite. ‘You have to love something that’s just covered and swimming in butter.’

Next up, Candace enjoys a dinner of Kylie’s shrimp tacos, although misses out on the cilantro and tomatoes in the recipe because, ‘I hate both of those things.’ 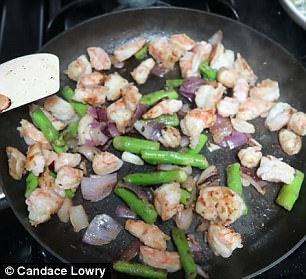 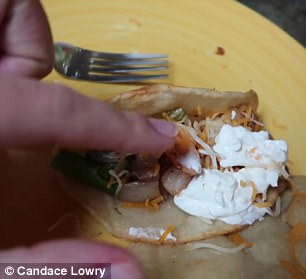 Putting it together: The tacos are made up of shrimp, onions, cheese, sour cream and guac 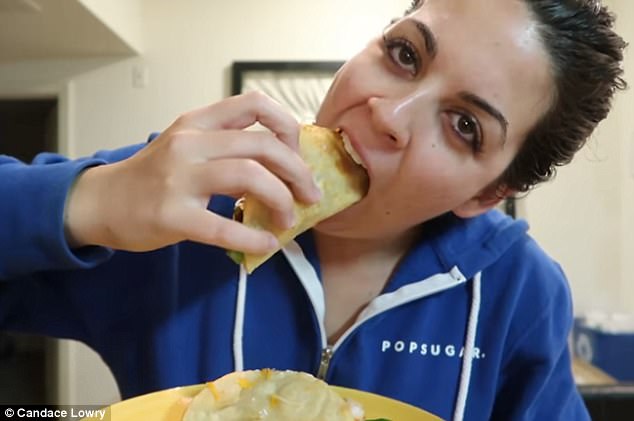 Massive hit: Candace absolutely loves the tacos, recommending to all her viewers to try them 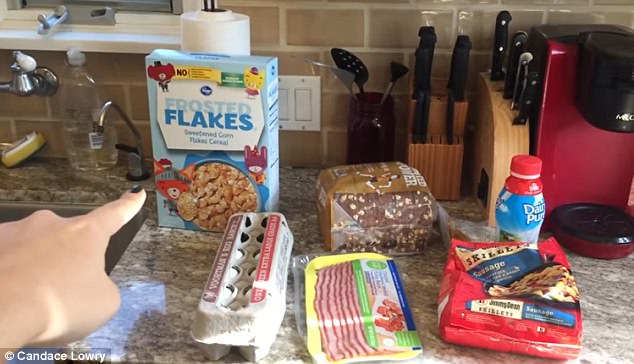 Big time: The next morning she takes on Kylie’s ‘Saturday morning breakfast feast’ 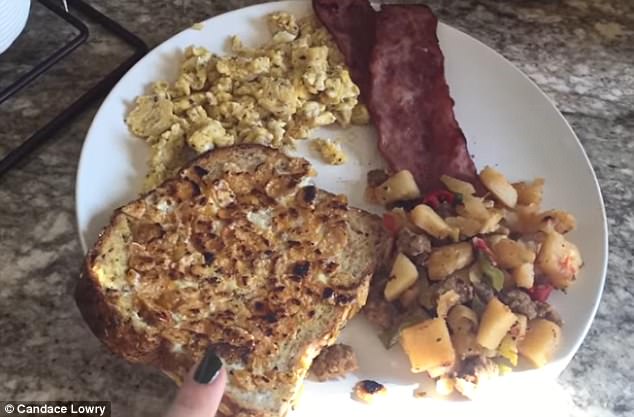 The 420 calorie tacos are a huge hit with Candace as she crunches into them, directing a message to Kylie: ‘Yes. Yes, continue what you’re doing.’

The next day, the YouTuber and her friend take on Kylie’s ‘Saturday morning breakfast feast’, which includes french toast crusted with Frosted Flakes, skillet sausage and potato mix, turkey bacon and eggs. In total, the meal adds up to a whopping 638 calories.

‘This is a hangover’s champion breakfast,’ says Candace as she bites into a slice of turkey bacon, later adding that it was ‘a little much’ and had a lot of sodium. 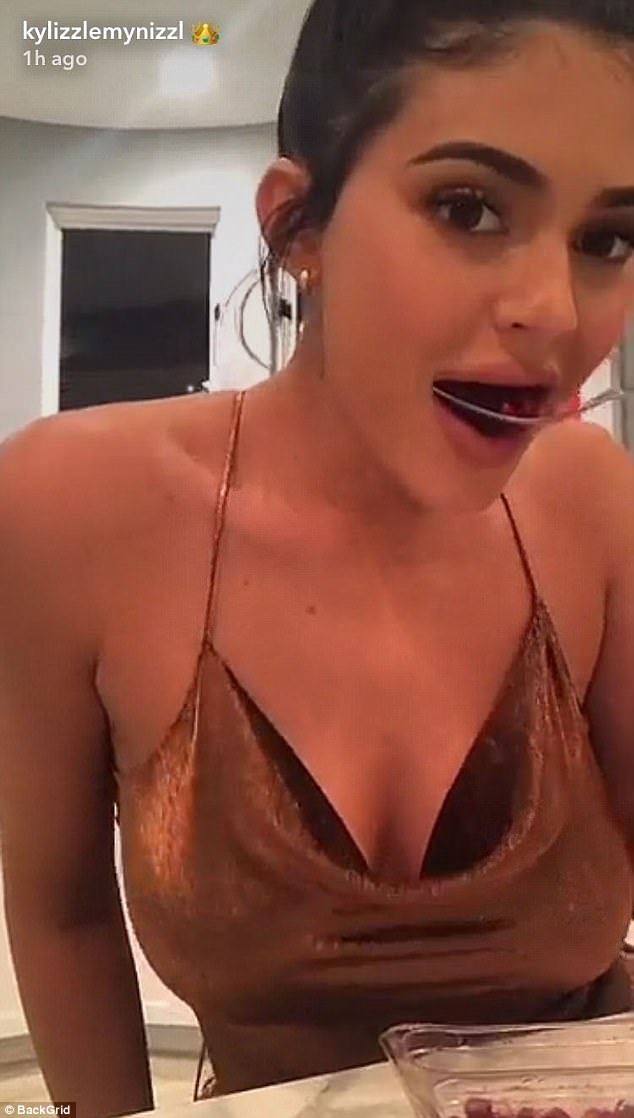 Always out there: Kylie has shared a number of recipes on Snapchat as well as on her app 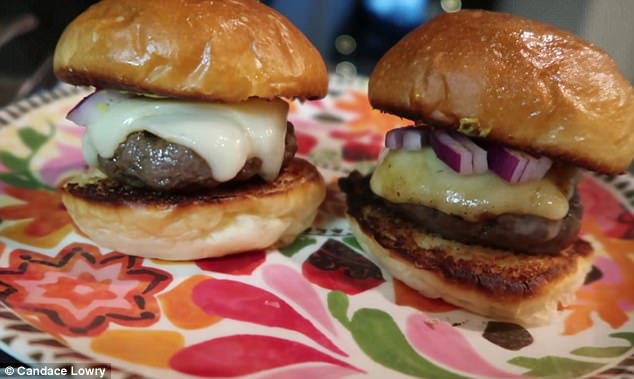 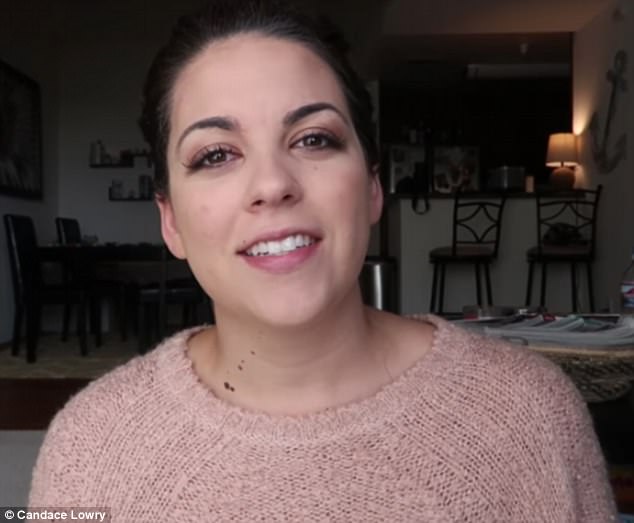 The least calorific of the recipes is a simple smoothie made from pineapple, strawberry, kale, spinach, blueberry and orange juice, clocking in at 187 calories. Candace opts for it after being held over thanks to the massive breakfast.

At the end of the challenge, Candace concludes that while Kylie’s recipes are ‘simple’ they are the equivalent of what most people go through when they are young enough to have a quick metabolism and regularly indulge.