These two tortoises are trying to have some alone time to mate – but the hilarious honking noise they make means they’re surrounded by amused onlookers.

The giant tortoises may be in the throes of passion, but they sound more like a couple of angry geese.

Savannah Boan, a crocodilian enrichment coordinator, captured their private moment, at Gatorland in Orlando, Florida, on May 8, for Gatorland Vlogs.

This is the moment Savannah Boan was trying to do a piece to camera at Gatorland in Orlando, Florida, when her concentration was disturbed by a pair of randy tortoises in the background 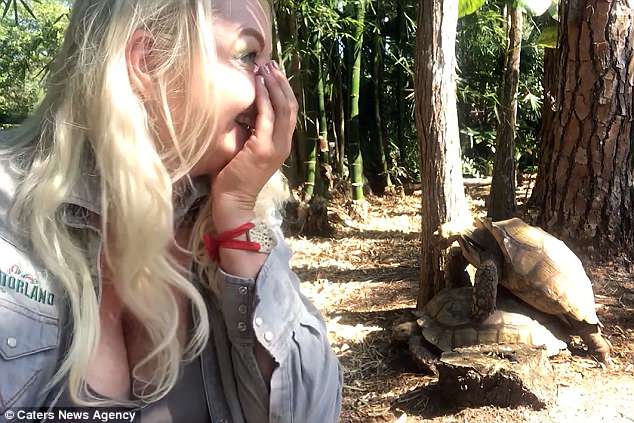 Even though it was something Savannah had seen before, it still made her and everyone around her burst into laughing.

‘I was trying to film an intro to a YouTube video and I thought they had stopped.

‘Just when I was about to start speaking they started again!

‘It’s probably still going on, sulcata tortoises are famous for their mating powers.’