A woman has praised a Starbucks barista for coming to her rescue while she was being harassed by a male customer whose refusal to leave her alone was making her anxious.

Avery Spencer, 23, was working at one of the coffee chain’s locations in Orem, Utah, on Tuesday when a stranger sat down next to her and wouldn’t stop talking to her, prompting her to start filming the uncomfortable interaction.

In the video shared on her @greenybeany420 TikTok account, she looked visibly tense as she tried to brush off the man speaking to her. That’s when Starbucks shift supervisor Tiffany LeMair Clark, 34, came over to check on her and refill her drink. 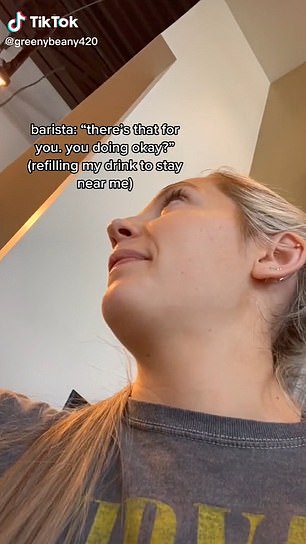 Harassed: Avery Spencer, 23, was working at one of the coffee chain’s locations in Orem, Utah, on Tuesday when a stranger sat down next to her and wouldn’t stop talking 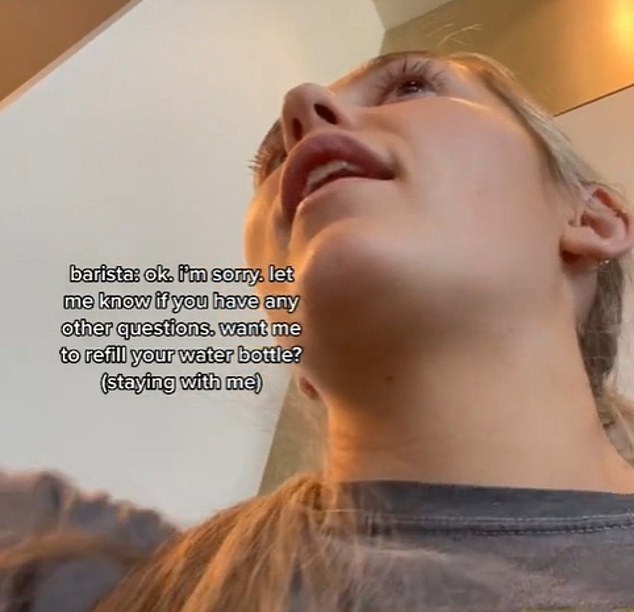 Help: In the video shared on TikTok, she looked visibly tense as she tried to brush off the man. That’s when Starbucks shift supervisor Tiffany LeMair Clark, 34, came over to check on her

The footage then cut to Avery recounting what had just happened while safely in her car in her parking lot.

Avery, who didn’t know Tiffany’s name at the time, noted that as soon as the man started to make her feel uncomfortable a ‘super observant’ Starbucks employee ran over to her and offered to refill her drink.

‘As she goes down to pick up my empty cup, she leans down and whispers and says, “We’ve been having an issue with this man. If he makes you uncomfortable, let us know,”‘ she explained.

‘She basically lets me know that they are going to be watching me, and they know that this man is harassing me, which was already so comforting to hear.’ 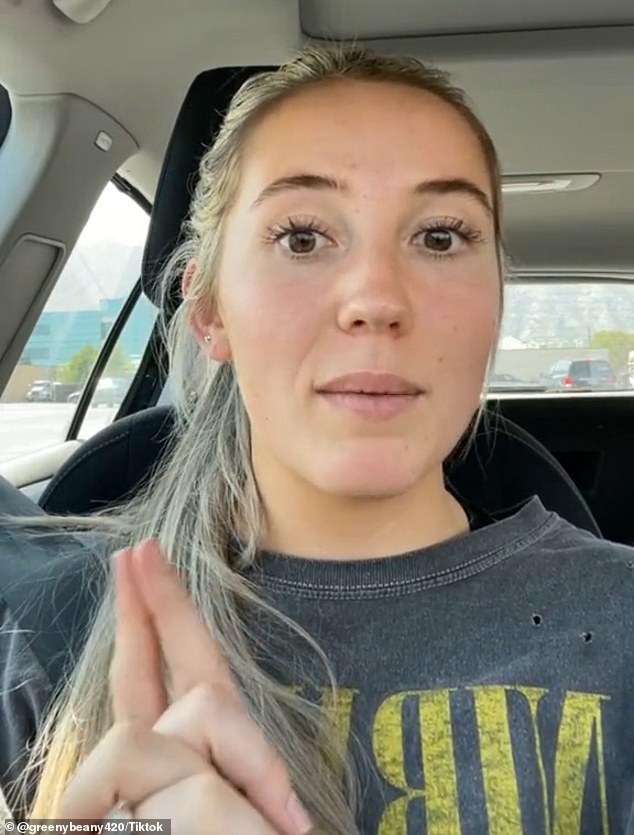 Not alone: Avery, who didn’t know Tiffany’s name at first, said it was ‘so comforting’ to know that the employee was looking out for her

Avery started recording the interaction while Tiffany was refilling her drink, and the video showed how the Starbucks employee went out of her way to stay near her, even offering to refill her water bottle.

The TikToker said she was grateful that the barista was there for her, recalling how there have been a number of times where she was being harassed in a coffee shop and didn’t have any support.

She ultimately decided to leave because she was almost done with her work and was feeling ‘anxious,’ but she was full of praise for the Starbucks team who offered to remove the man from the premises.

‘They were just so observant,’ she said toward the end of the video. ‘They were just immediately there and helpful and I’m just grateful for that. So, thank you to those baristas.’

Avery’s TikTok has been viewed 1.4 million times and has received over 1,000 likes. Many commenters said they were glad she was safe and shared their own harassment stories. 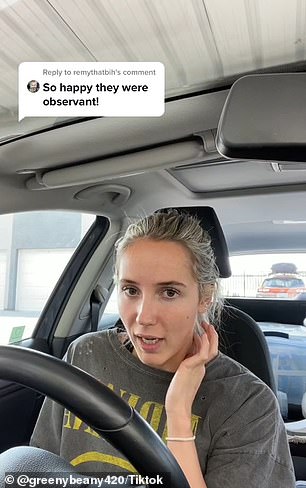 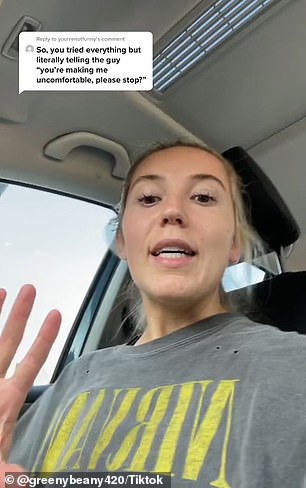 Struggle: Avery explained in a series of follow-up videos she has ‘horrible anxiety’ and was trying to ‘work up the courage’ to tell the man to leave her alone when the worker intervened

Support system: A number of viewers shared their support for Avery in the comments, including Tiffany

However, there were some who chided her for not yelling or being more direct, with one person pointing out that she never specifically told the man he was making her uncomfortable.

Avery explained in a series of follow-up videos that she has ‘horrible anxiety,’ and she was trying to ‘work up the courage’ to tell the man to leave her alone when the employee intervened.

A number of TikTok users came to her defense, with many people pointing out that being aggressive or argumentative with men can make situations like this even worse.

After Tiffany reached out to her in the comments and explained she was the one who had helped her, Avery shared her TikTok handle, telling her nearly 100,000 followers to ‘go hype her up.’

Tiffany posted her own TikTok video about the man, explaining that she was already on high alert when he came in because he has been harassing the location’s baristas.

‘I’ve been working the past seven days, and I’ve seen him almost every day,’ she said. 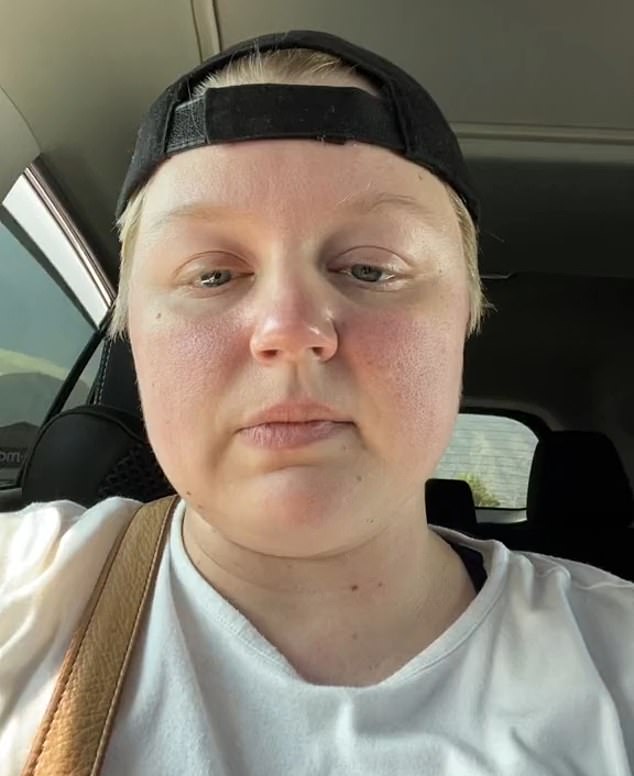 Hero: Tiffany later shared her own TikTok video about the incident, saying she wanted Avery to know she ‘wasn’t alone’

Praise: Avery was among those who took to the comments to thank her for handling the situation the way she did

According to Tiffany, they’ve had customers in the past who would bother the baristas, but they would typically walk away once they realized the employees were busy and couldn’t talk.

‘This gentleman in question did not do that. He, obviously, could not read that he was making my staff uncomfortable,’ she said, noting that he was bothering both the female and male employees at the location.

Tiffany said she struggles with panic attacks, anxiety, and depression herself, so she was quick to notice Avery’s body language while he was speaking to her.

‘I just wanted to let her know that she was being supported, that it wasn’t just her, that she wasn’t alone,’ she said. ‘Because so many people feel that way, and I didn’t want her to feel alone.’

Tiffany ended the video by saying the incidents have been reported, but the police were not involved. She and another employee had personally escorted him off of the premises.

‘I’m glad that she felt safe,’ she said of Avery.