A woman has gone viral for sharing videos of her Tinder date shaming her for not sleeping with him on the first date after pressuring her to drink even though she is a recovering alcoholic.

Madison, 25, from Indiana, explained in a series of TikTok videos that she had been talking to the man for about three weeks on the app when they decided to meet up. They were supposed to go to dinner, but when he picked her up, he said they were going back to his place to watch a movie instead.

She told BuzzFeed News that he made her uncomfortable by trying to get her to drink alcohol with him. The date went from bad to worse when he started yelling at her, telling her she shouldn’t be on Tinder if she doesn’t want to ‘f**k.’

Shocking: Indiana-based TikTok user Madison, 25, has shared a video of a man she went on a Tinder date with shaming her for refusing to sleep with him the first time they met 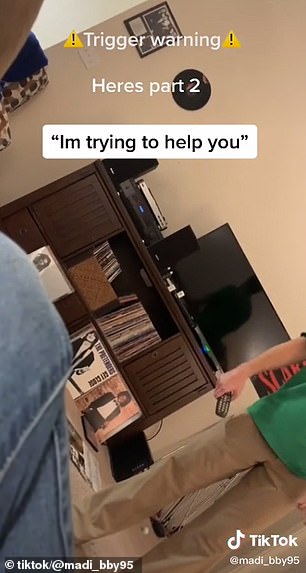 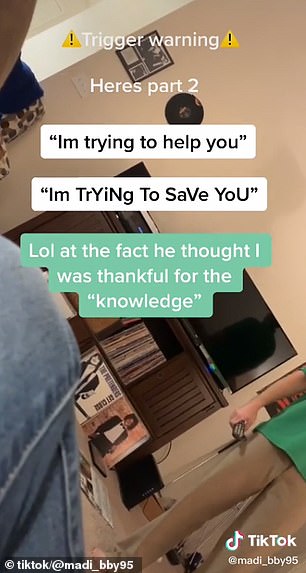 Exposed: In the clip, the unnamed man is heard telling Madison that ‘adults don’t use Tinder to date… they use [it] to f***’

Madison filmed his toxic rant and shared it on TikTok, writing in the caption: ‘He’s saying because we met on Tinder I’m required to have sex with him.’

‘If you say that, then you’re not going to get any Tinder match-ups!’ he argued, clearly missing the point.

Madison reiterated that if he was upfront on Tinder he wouldn’t have to lure girls back to his apartment and ‘get s***y’ when they won’t sleep with him.

‘Fair, but I’m telling you, this how it works,’ he responded.

She stressed that ‘this is literally toxic masculinity,’ but he claimed it wasn’t, all while continuing to mansplain her.

The man insisted he was ‘trying to help’ her, and she sarcastically thanked him for sharing his ‘knowledge.’

‘I’m not trying to be some jack*** guy who mansplains things,’ he said, prompting her to point out that was exactly what he was doing. 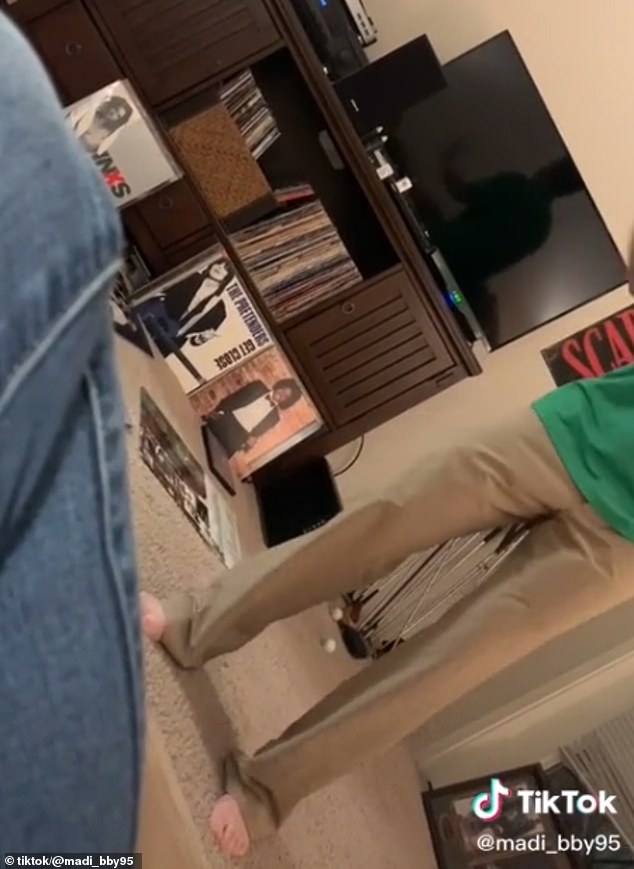 Fear: In a follow-up video, Madison explained that she had originally agreed to meet the man for food, but he suggested they go back to his home to watch a movie 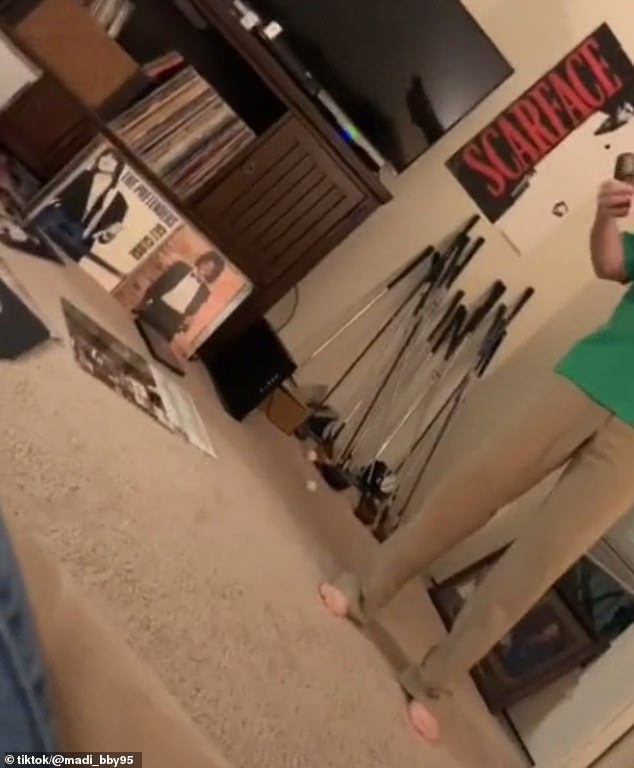 Pressure: She said that she started to feel incredibly uncomfortable when he tried to make her drink alcohol – despite the fact that she is in recovery 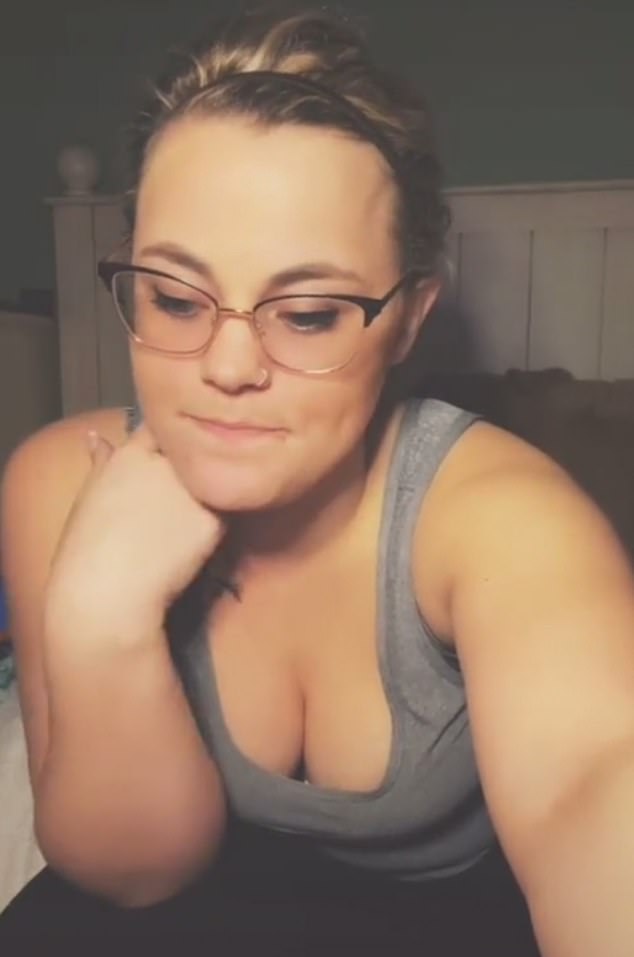 What? Madison told the man that he should make it clear in his Tinder bio that he is only interested in casual sex, but he complained he ‘wouldn’t get any match-ups’ if he was honest

In a series of follow-up videos, she explained that the date took place in November, and she was able to get out safely.

She noted that she didn’t plan on going to his house, but when he picked her up from work, he told her they were going to his place to watch a movie.

Madison stressed that in her Tinder bio it explicitly said: ‘Not here for hookups.’

‘We had been talking for three weeks over Tinder, never talked about hooking up or anything like that,’ she said. ‘He was super respectful, so the whole situation sent me.’

In another video, she detailed what happened after she decided to leave, saying she knew it would take her friend too long to get there, so she ordered an Ube. Even though it was the fastest option, it still took 15 minutes to arrive.

‘So at this point, I hadn’t even told him I had ordered it. He had already sat down, so as he sat down, I got up and started walking towards the door,’ she recalled.

Madison said that ‘after he said that, it clicked like, “Oh my god you have to get out of here.”‘

‘I’m in recovery so a lot of people kept asking why I looked really calm, cool, collected. The only answer I can give that is, I’ve been through a lot worse,’ she shared. ‘And I felt comfortable waiting it out and… I knew I could protect myself if it came to that. 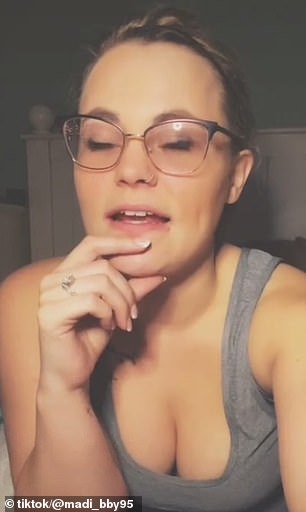 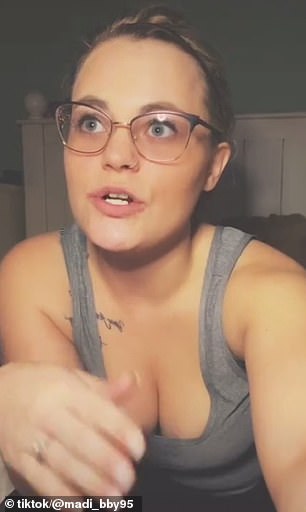 Concern: Madison later reassured her followers that she made it out of the date safely, explaining that, as someone in recovery, she has been in scarier situations in the past 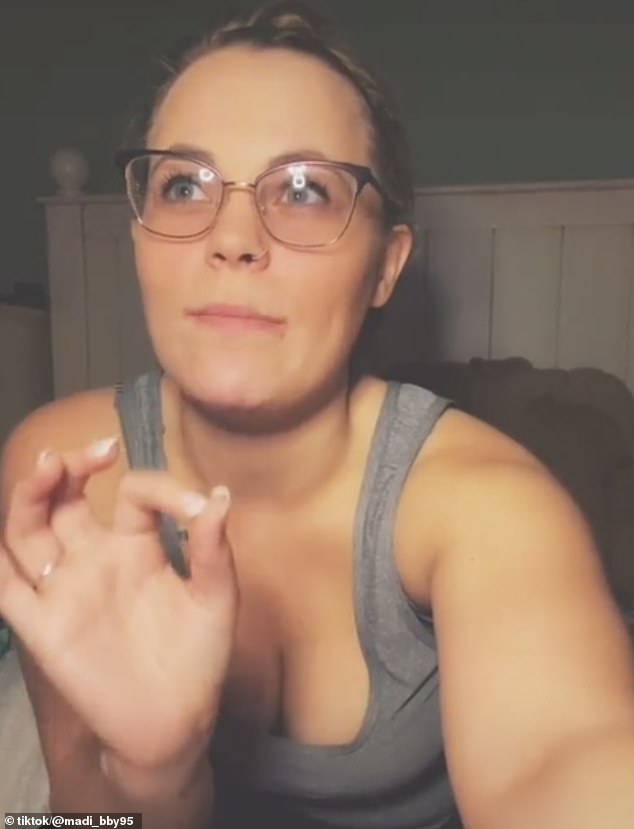 Consequences: She contacted the man’s employer, but never heard anything back from them

Madison said she ‘booked it’ and ran to the elevator when she realized he wasn’t following her. Her Uber was still 10 minutes away, so she sat and waited in front of the building under a security camera.

When she went to screenshot his Tinder profile, she learned he had already blocked her. The entire time, she was worried he would come down to find her.

‘It was the longest 10 minutes I had ever experienced,’ she said.

The one silver lining was that her Uber driver was ‘super, super sweet’ and told her he just wanted the best for her. She said he was an older man with children around her age, and they talked the entire 30-minute drive.

Madison waited until she got home to post the video of him yelling because she wanted to make sure she was safe. She held off posting the follow-ups about what happened because she had contacted his place of employment to report him.

She never ended up hearing anything from the man or his employer, who later deleted the comments on their Facebook saying they were going to look into the incident.

‘I never heard anything, so he got off with nothing,’ she said. ‘Yeah, makes me sad to think of all the girls he’s done it to.’