Woman finds a mountain lion in living room, says she used TELEPATHY to get it to leave

An Oregon woman who found a mountain lion in her living room says she used telepathy to get it to leave.

Lauren Taylor says the lion had been drinking from a fountain nearby her back door, which was open, before letting herself into the home.

‘The door was open and the room has huge plants and stairs built around real tree branches, so she likely didn’t even realize she was walking indoors until she was inside,’ she told friends on Facebook.

‘She immediately tried to leave through a closed window, became frightened when someone screamed, and hid behind the sofa.’

Lauren said the when she came to see what was going on, the animal was ‘frightened, agitated, and determined to exit through a closed window’.

Eventually, the mountain lion calmed down and hid herself behind the sofa. Lauren says she went outside to see through the window what the beast was doing, and was stunned to find she was asleep. 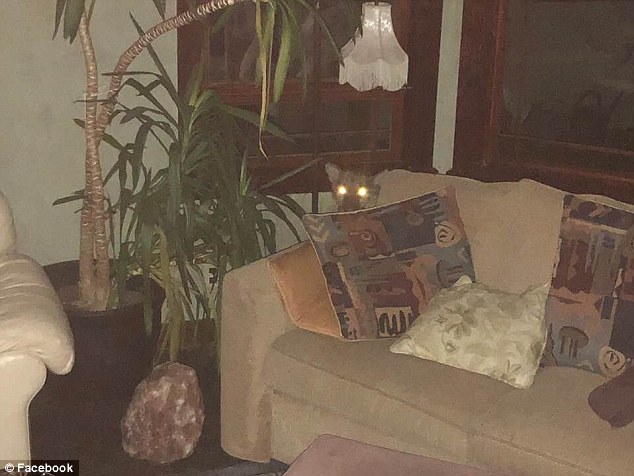 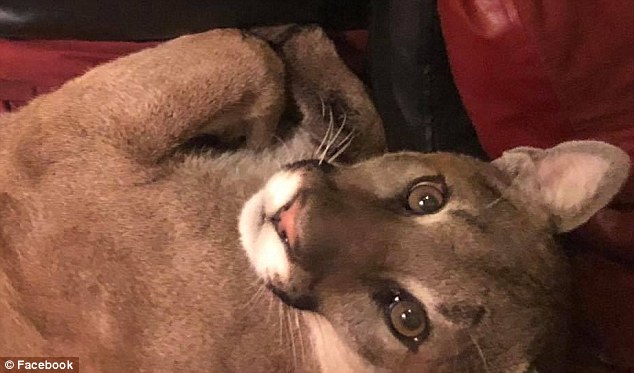 Lauren says the beast was scared and agitated when her housemate screamed and slammed the door, but soon calmed down and went for a nap behind the sofa

The lion stayed behind her couch for six hours – occasionally waking up and making eye contact with Lauren before stretching and going back to sleep.

Finally, Lauren decided the mountain lion was calm enough for her to try and coax the unwelcome house guest back outside.

‘It was just a couple hours to dawn and we needed to prompt her to leave without alarming her so much that she panicked,’ she explained.

‘I sent telepathic pictures of the routes out of the house via open doors and the route out the backyard, across the creek, through an open field, and back up into the hills.

‘We got guidance that the way to rouse her and get her to leave her safe spot behind the sofa without panicking was through drumming.’ 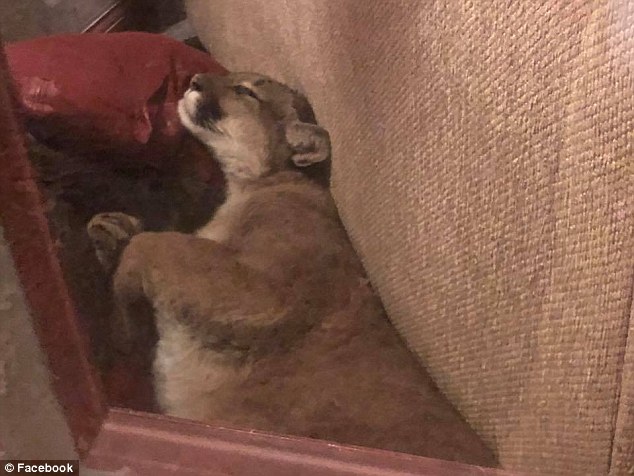 Eventually, after six hours, Lauren knew it was time for the beast to go, so telepathically transmitted a route back to the woods to her unwelcome house guest

Video shows the mountain lion waking up to the sound of bongo drums before effortlessly walking out of the house, taking the same route Lauren had dreamed up for her.

‘She roused and knew just what to do…. walking out through the open doors, through the yard, across the creek, and through the empty field behind us exactly as we had shown her,’ Lauren said.

‘I am hopeful and confident this cougar will not be back.

‘She was urged telepathically to go straight back through the open field into the hills and never come into town again for her own safety.

‘And she did go straight through the open field, away from homes when she left!’ 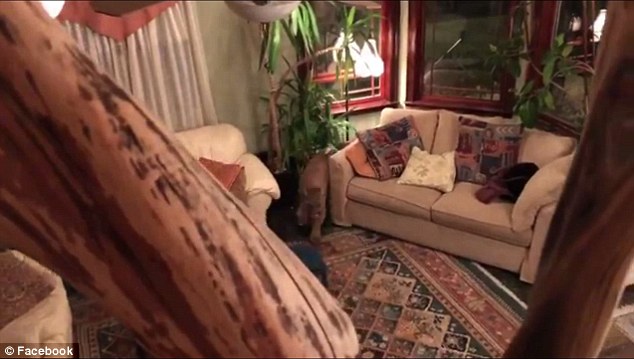 The mountain lion appeared to get the message, and was seen getting up and calmly leaving