Woman finds out she will marry in 24 hours in Greece

This is the moment an unsuspecting girlfriend discovered that she was getting married in less than 24 hours – after her partner spent nine months planning the perfect wedding.

Michelle Williams, 37, from Wirral, Merseyside, was over-the-moon after her partner Scott Williams, 42, proposed at a winery in Santorini, Greece.

After she immediately said ‘yes’, she heard a chorus of cheers – and turned to see over 50 friends and family waving from the rooftop of the building behind them.

Scott then revealed that they were getting married the very next day, explaining how he had organised everything – including the venue, flowers and even her wedding dress – without her suspecting a thing.

While some brides would have preferred to have had a hand in planning the big day, Michelle said she had complete trust in her partner – adding that there was ‘nothing’ she would have done differently.

Michelle Williams, 37, from Wirral, Merseyside, was over-the-moon after her partner Scott Williams, 42, proposed at a winery in Santorini, Greece (pictured). But she was left completely overwhelmed when he told her the wedding was going to be the next day

Describing the moment she found out she’d be walking down the aisle, Michelle said: ‘I was so overwhelmed by it. I get emotional now even thinking about it, as it was all so surreal.

‘We were sitting there enjoying the views. We were about to leave to go back to the hotel, but Scott turned to me and said, “I want to do this first.'” He got down on one knee and proposed to me.

‘I had always wanted to get married, but never even considered that he might propose then. I was so shocked, but of course I said yes straight away.

‘Everyone was saying, “Did you really not know?” I said “Do you think if I knew, I would have been wearing shorts and a t-shirt?” 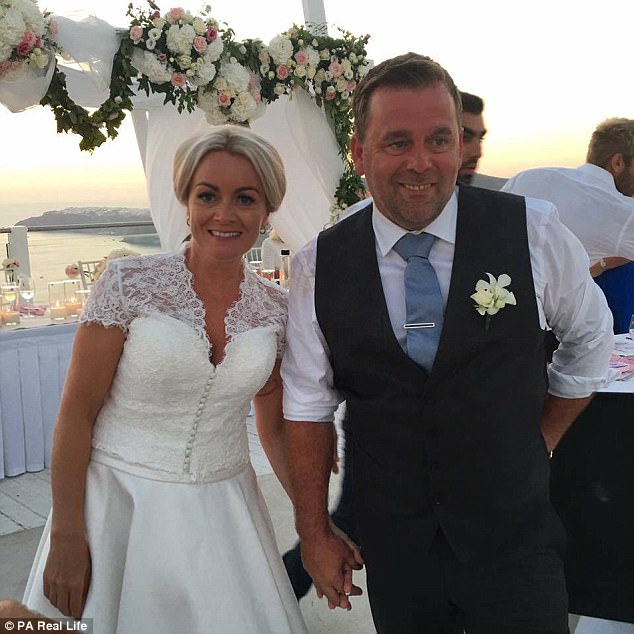 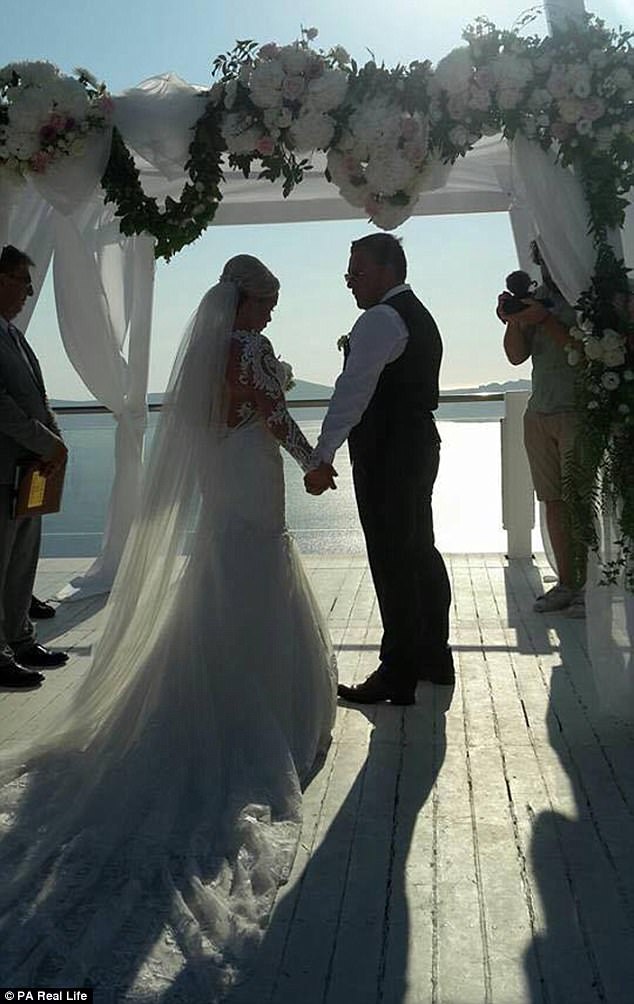 The wedding took place at a stunning rooftop venue, with breathtaking views across the island 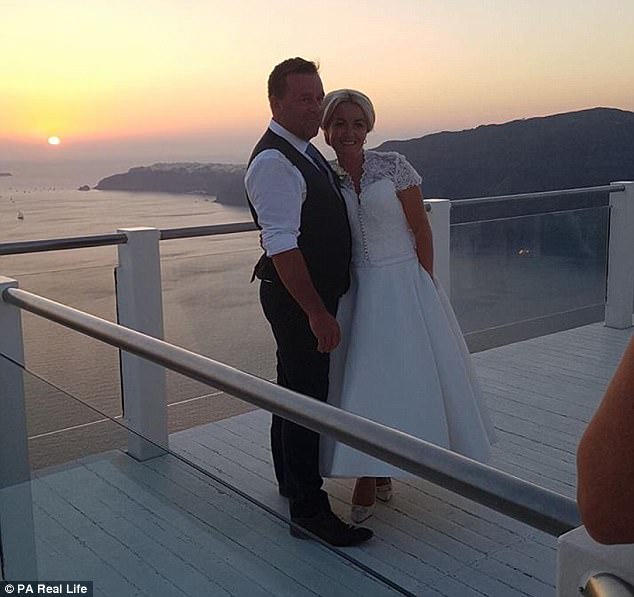 Scott had organised everything, including the dress, the venue and flowers without her suspecting anything

‘I would have put something a bit more glam on. I was dressed for comfort, but this was one of the biggest moments of my life.’

As she hugged her new fiance, Michelle heard rousing cheers in the background and was even more shocked when she realised Scott had flown out their closest friends and family to watch.

Michelle added: ‘Then he said, “By the way, the wedding is tomorrow.” I wasn’t worried about anything, though, because I knew he would do a good job.’

While some brides would prefer to have a hand in planning their own weddings, Michelle said the day was ‘perfect’ adding that ‘there was nothing I would have done differently.’ 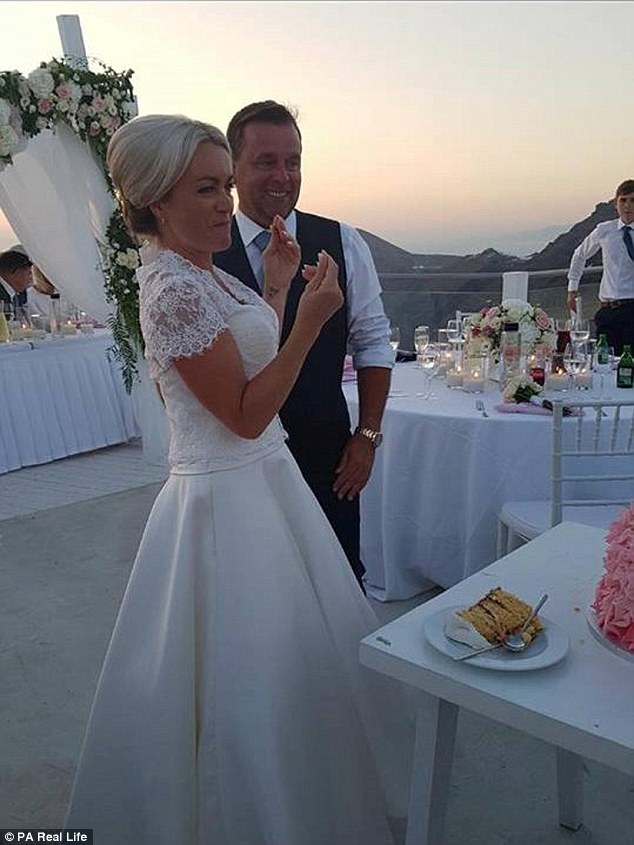 Months before the surprise wedding, Michelle had gone to see Scott’s friend, a wedding dress boutique owner, who convinced her to try on some gowns 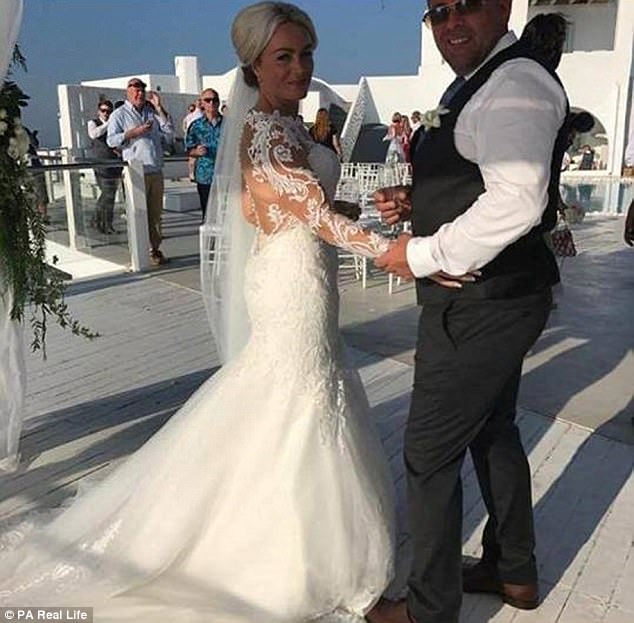 On the morning of her wedding, Michelle discovered that Shelly had travelled to Santorini, bringing her dream dress 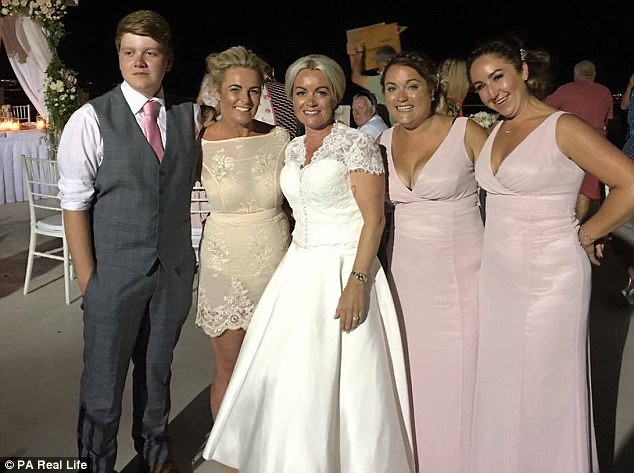 Michelle says she had no idea of the enormous surprise that her partner had in store, adding that she ‘still can’t believe he pulled it all off’.

‘Scott had planned everything with all my friends and family and I didn’t have a clue,’ she said.

‘He’s quite a man’s man, so he’s not usually this romantic. He can be at times, but this was really something special.’

Scott had booked a family holiday to Santorini as a treat for Michelle, who was coming to terms with the death of her mum Janet. 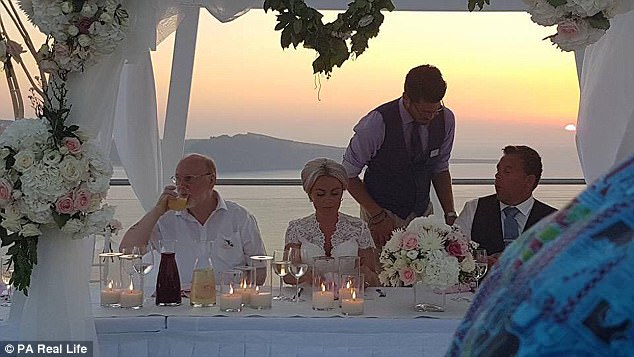 Scott had booked a holiday to Santorini as a treat for Michelle (pictured with her father), a year after the death of her mother Janet 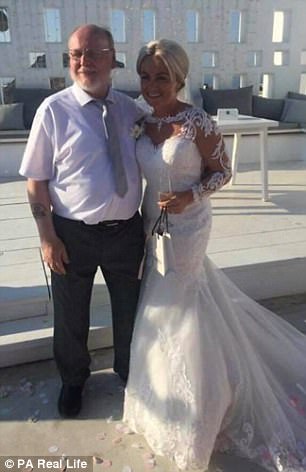 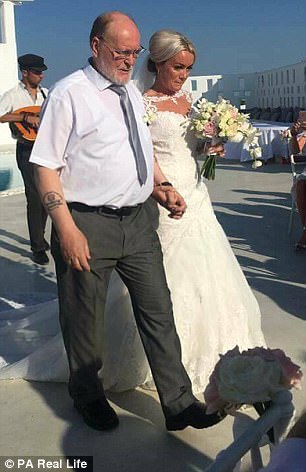 She explained: ‘My mum passed away last year. I thought this holiday was to help take my mind off the anniversary.

‘My brother, sister and my dad were coming with us, as well as my children Molly, 14, and Brandon, 18, from a previous relationship.

‘My dad, Michael, is 79 and he hasn’t been on a plane since he was in the army, back in 1957. When the others told me dad was coming, I was surprised, but thought it would be lovely.

‘I had absolutely no idea that anything else was going on. I just thought it was a big family holiday.’ 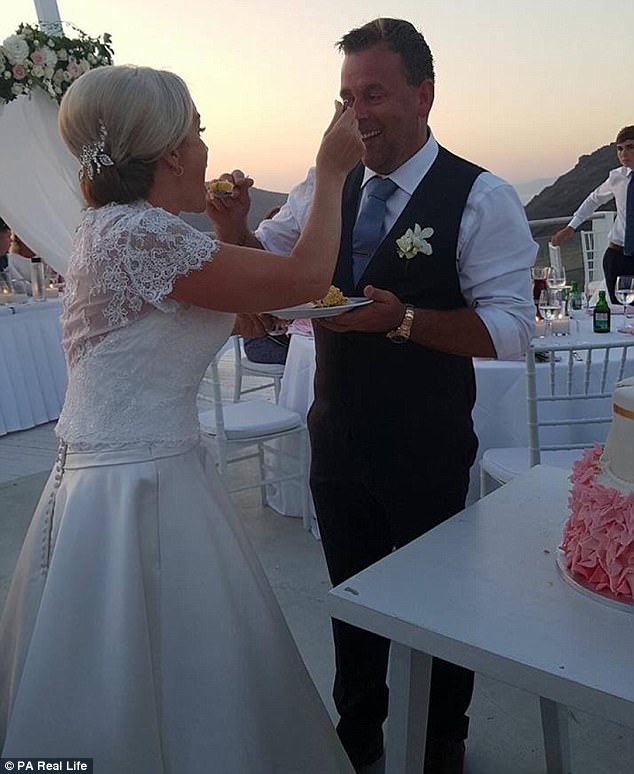 While some brides would prefer to have a hand in planning their own wedding, Michelle said she ‘wouldn’t have changed a thing’ 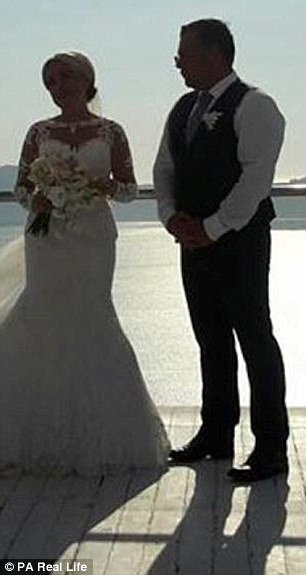 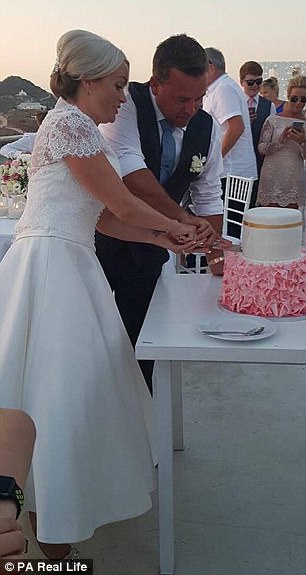 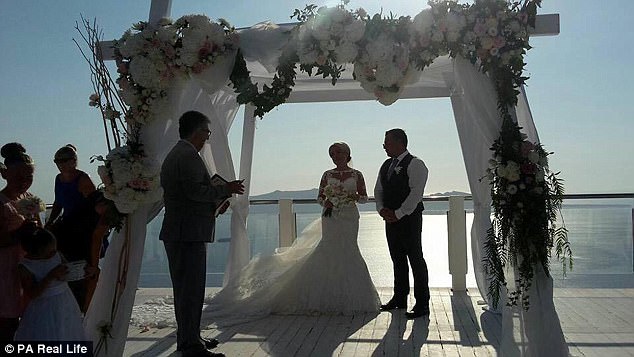 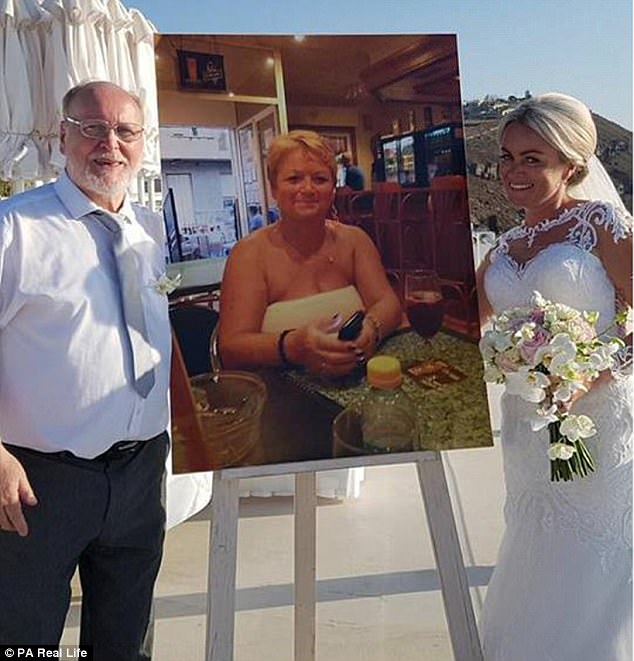 He knew that Michelle would have wanted her mother to be there, so had got a picture of her printed and placed on an easel at the wedding

The morning of her wedding day, Michelle woke up with no idea what was going to happen – and most importantly, what she was going to wear.

Nine months before, she had visited Scott’s friend Shelly Jory-Leigh, who owns the dress shop Brides of Southampton.

Over a coffee, Shelly had suggested she should try on some of their new stock, to help them assess the fit.

Michelle explained: ‘Before she’d even said that, we’d been looking through some brochures and I saw a dress that I just fell in love with. It was white, fitted lace with a beautiful long train. I was really excited when Shelly brought out the ones to try on and it was one of them. 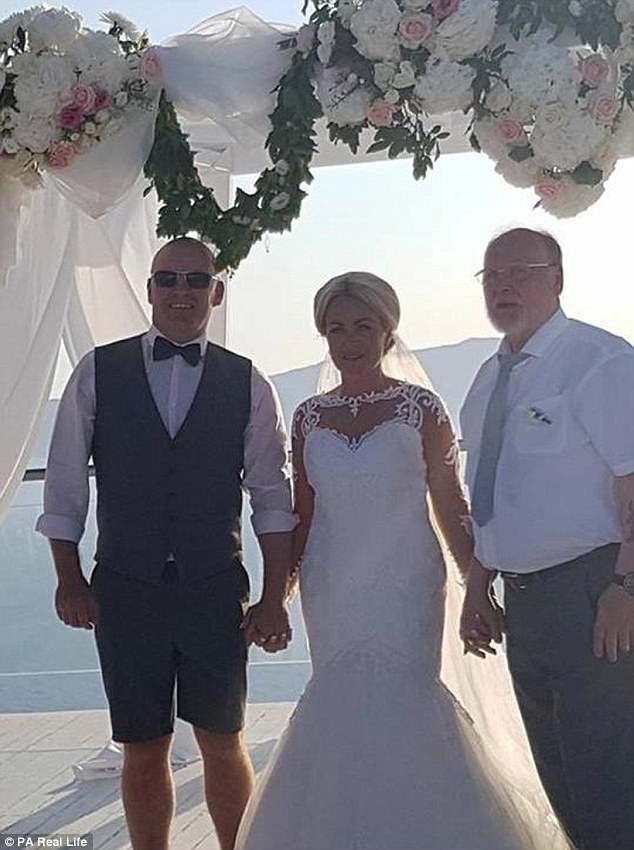 Scott told Michelle that he was going to Russia to look at a boat, when he was secretly looking at wedding venues 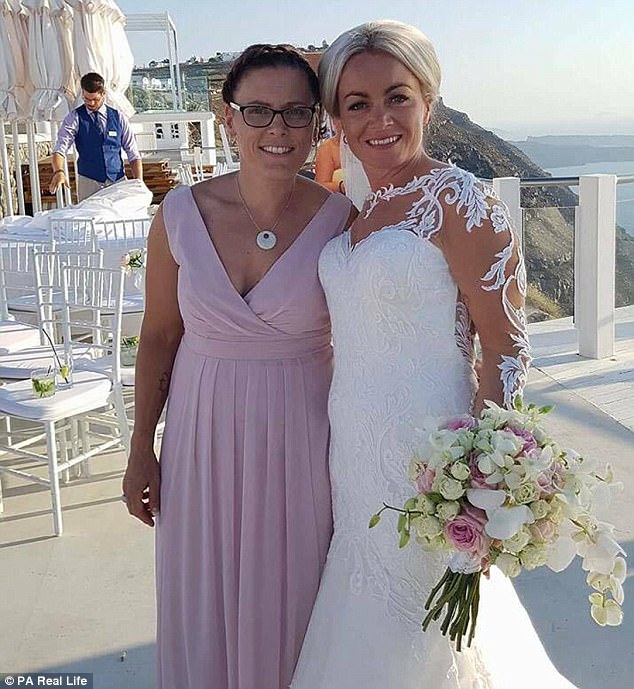 Her partner also picked out matching pale pink dresses for all the bridesmaids. Michelle is pictured with her sister 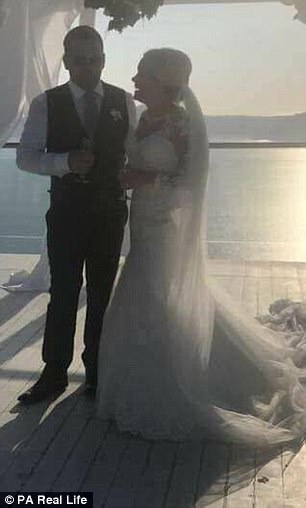 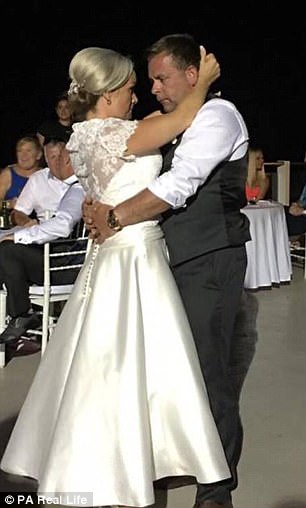 Scott even chose a second second 50s style dress for Michelle to change into in the evening (right). The couple danced to Ed Sheeran’s Thinking Out Loud for their frist dance

‘I tried it on and I started crying, because I was thinking of my mum and I wanted her to see me in a wedding dress, but I just kept saying, “I’m not even getting married.”

‘I had no idea that it was all a ploy so that Scott could pick something that I would like. I thought it was just a bit of dressing up.’

On her wedding day, Michelle was delighted to discover that Shelly had travelled to Santorini, bringing her dream bridal gown – a long fitted, white lace dress together with a shorter frock that Scott had chosen for the reception afterwards.

Shelly, who has no idea what the wedding cost, revealed the dresses, out in the open, with the turquoise sea as a backdrop, with family and friends watching, as she was moved to tears. 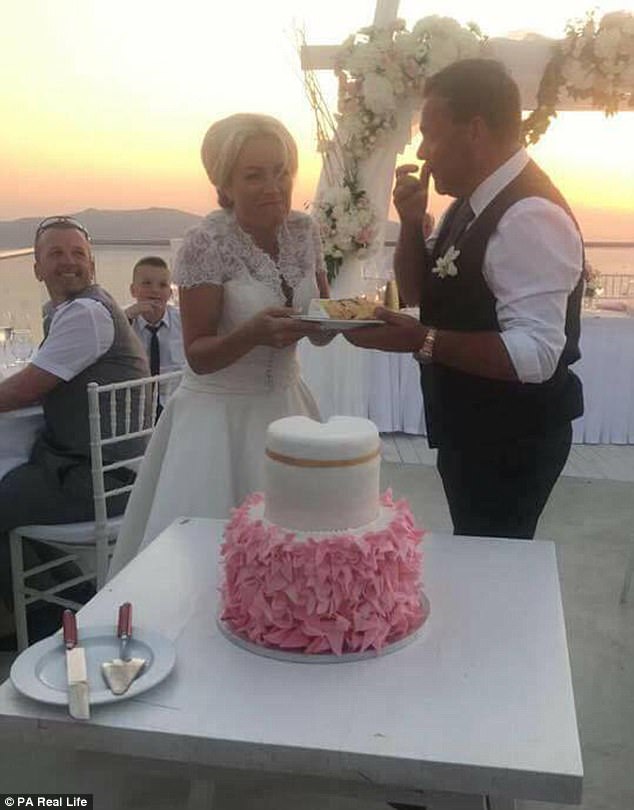 Michelle revealed she has no idea what the wedding, which Scott spent months planning, cost 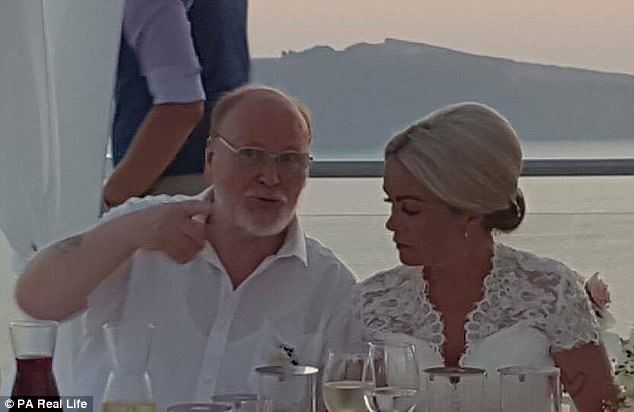 She said he had remembered every last detail, including name tags on the tables 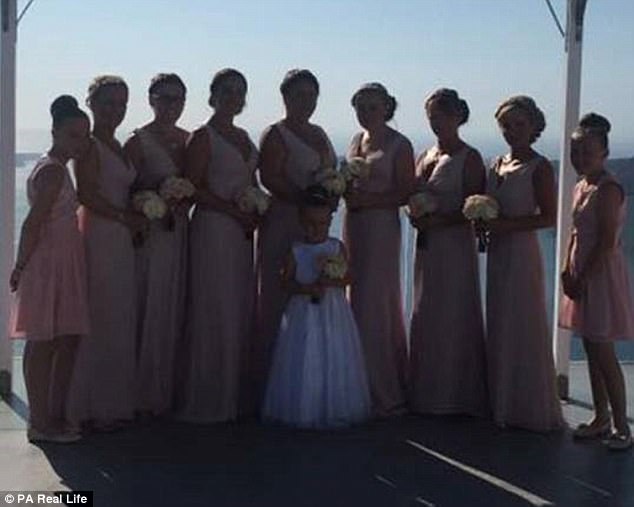 Scott had arranged hair, make-up, flowers and even made sure the eight bridesmaids’ light pink dresses were perfectly fitted (pictured) 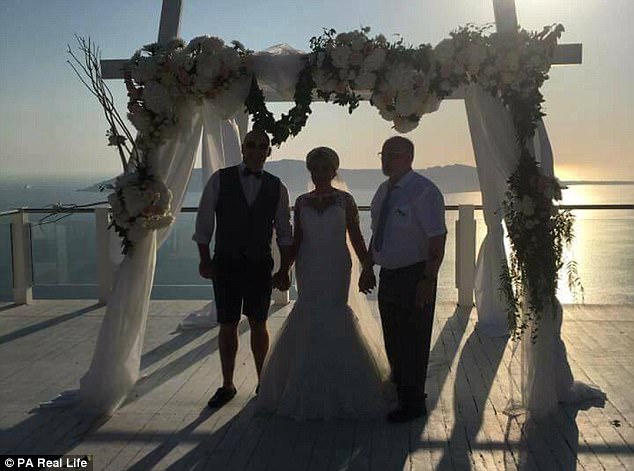 After making the most of the stunning scenery for their wedding photos, the rooftop was transformed into a splendid party pad 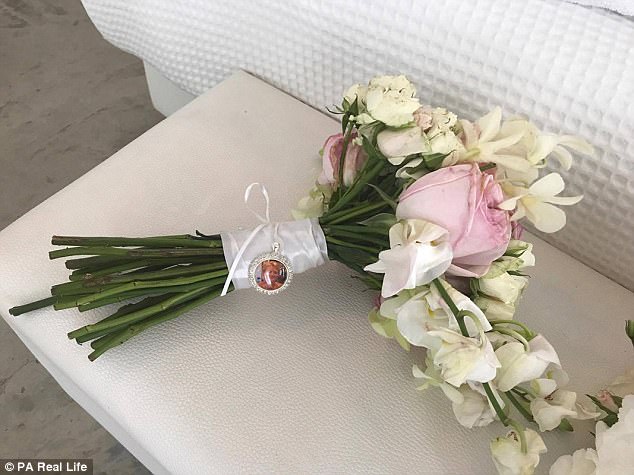 Scott, who Michelle says is not usually romantic, picked out a beautiful bouquet for his bride (pictured)

There were even more surprises to come, as Scott had arranged hair, make-up, flowers and even made sure the eight bridesmaids’ light pink dresses were perfectly fitted.

Michelle’s dad walked her up the aisle, which had been specially constructed outside at a rooftop venue with spectacular views of the island, to meet her charming groom.

Describing her big day, Michelle said: ‘Scott had planned it all so well. He had a photographer, cake and even remembered name tags on the tables. It was amazing.

‘I had so wanted my mum to be there and he had got a picture of her printed and placed on an easel at the wedding. That meant so much to me and my dad. When I was walking down the aisle, I had tunnel vision, but when I was saying my vows, I saw the picture and it was just perfect. 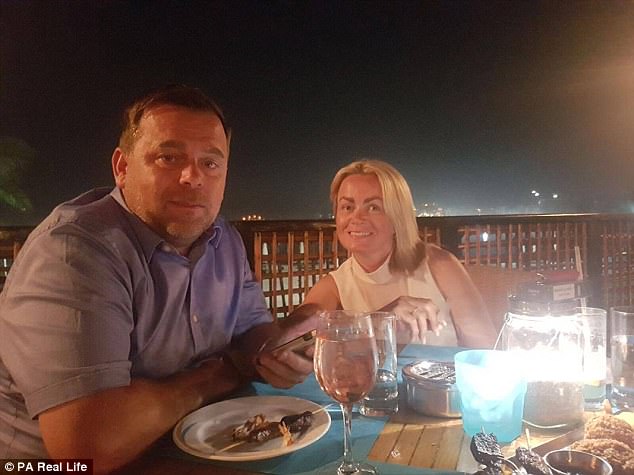 Michelle said she had always wanted to get married, but never even considered that he might propose then 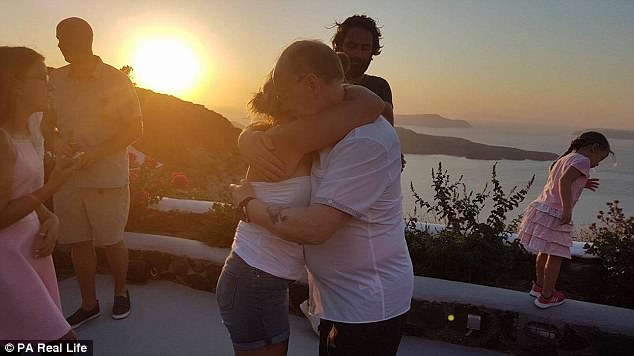 After saying ‘yes’, she turned to see over 50 friends and family waving from the rooftop of the building behind them

‘It made me feel like she was with us. He had just done so many little thoughtful things.’

After making the most of the stunning scenery for their wedding photos, the rooftop was transformed into a splendid party pad.

Michelle changed into her second gown, a short fifties style dress, before enjoying the first dance to Ed Sheeran’s Thinking Out Loud and then boogying the night away with all their guests.

‘I think everyone had a great time,’ Michelle said. ‘Afterwards, I think they were all relieved that they could talk about it and didn’t have to keep it a secret any more.

‘I had never suspected anything. It wasn’t until afterwards that I started putting things together. 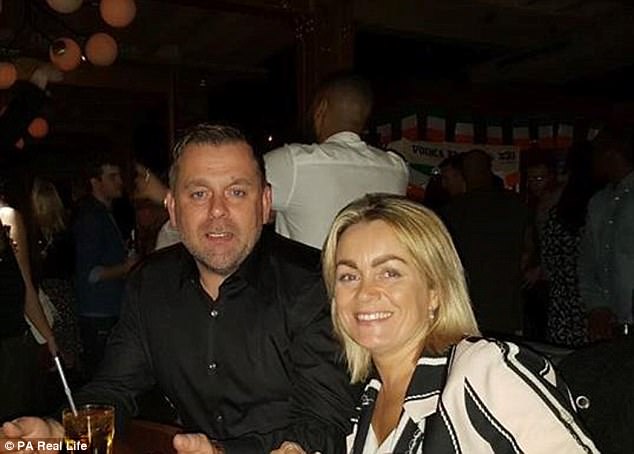 Michelle says they haven’t had a honeymoon yet, adding she needs a chance to get over the wedding first 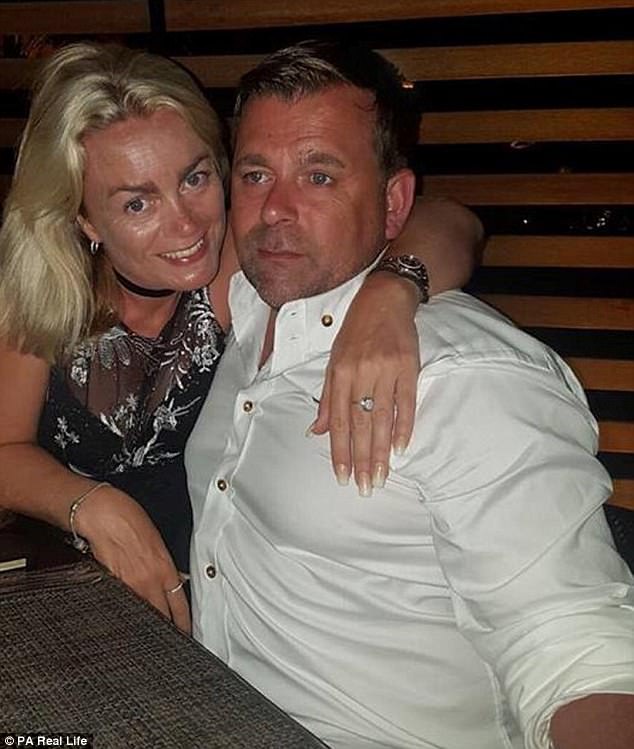 Scott said he started planning everything back in January, admitting there were some moments where he thought Michelle was going to find out

‘Scott, my daughter and our friends Ken and Lorraine had been out to look at venues, but he had told me he was going to Russia to look at a boat, as he’s into powerboat racing.

‘I looked at the temperature and said there was no way I was going. That’s how they ended up sneaking off to look at venues, without me realising.

‘We haven’t had a honeymoon yet, but I think I need a chance to get over the wedding first!’

Scott added: ‘I started planning everything back in January and it was a challenge but I know that organising a wedding is so stressful. After everything that happened with Michelle’s mum, I didn’t want her to have to worry about it.

‘I knew I could do it and I did have a lot of help but it was a lovely day. There were some moments where I thought she was going to find out but luckily she never caught on.

‘I knew she would say yes and I was so glad she did.’