A California woman suspects she inadvertently stumbled upon a dark web illegal drug ring — after making a harmless purchase on Amazon and receiving something far more sinister.

Meagan Day, a writer from Easy Bay, was just trying to order Russian felt sauna caps for herself and her friends, thinking the traditional ethnic hats would be fun to wear the next time they headed to a spa.

But a month later when her package arrived from Ukraine, she opened it up to find a bottle of Vidatox, a Cuban drug made from blue scorpion venom that is used to treat cancer.

How it begins… Meagan Day, a writer from California, has gone viral after telling a story about buying felt sauna hats

Totally innocent: She thought she was buying hats like this one, which are worn to keep heads cool in the sauna. This one has the word ‘Oligarch’ written on it in Ukrainian

Wait a minute! Megan was understandably surprised when her package came in the mail and contained a bottle of Vidatox, a Cuban drug made from blue scorpion venom 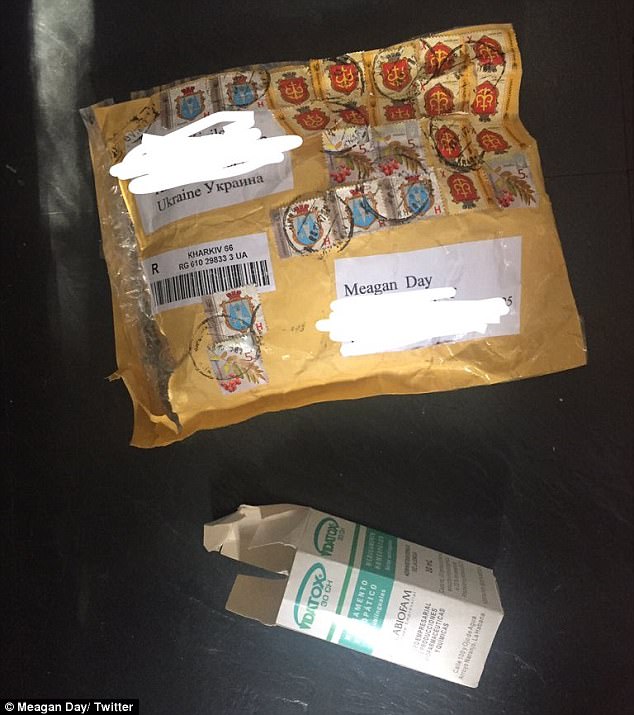 Law and order: Because Vidatox is made in Cuba, it can’t be legally bought in the US., which has a commercial embargo against Cuba that prohibits imports from the country

So weird: Her plans to ‘schvitz in style’ were foiled by a very odd packaging mix-up 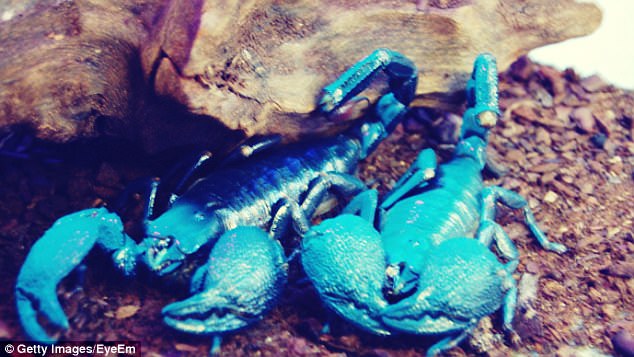 The medicine: Drugs with blue scorpion venom have been shown in some cases to reduce cancer cells

‘Boy do I have a story for you,’ Meagan wrote on Twitter on January 25. ‘I tried to order some felt sauna hats that say “oligarch” on them from an Amazon seller named RussianBear, for me and my friends who like to sauna, like as a joke (though I actually really wanted one).’

In bath houses in Russia and Ukraine, it’s common to wear felt or wool caps when using a sauna. The caps protect the head from getting too hot so the body doesn’t overheat while sitting in the high temperatures.

But Meagan will have to try shopping again if she’s determined to have one.

‘A month later,’ she went on, ‘I got a package from Ukraine containing only a contraband Cuban cancer drug made from blue scorpion venom. That’s it. That’s my story.’

Included in the tweet was a picture of the package, containing a bottle of Vidatox. Vidatox is made using venom from the Junceus Rhopalurus scorpion, also called the blue scorpion, which is found in Cuba. 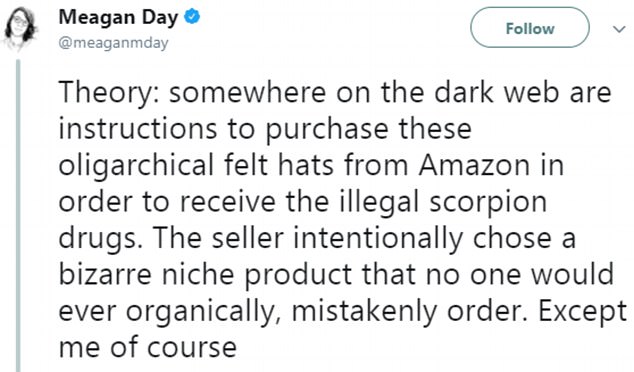 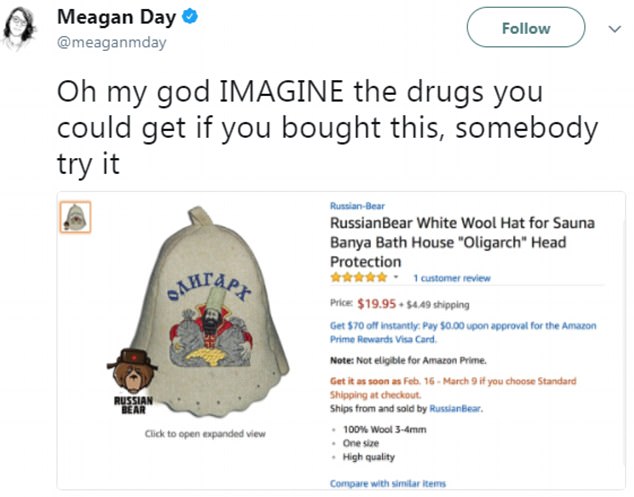 Funny: She joked that this might be another decoy product

Meagan figured that the hat was so niche that a drug-seller might use it as a front, assuming no one would actually choose to buy it unless they knew it was a cover for drugs

Plausible: Several people seemed to think that this made sense 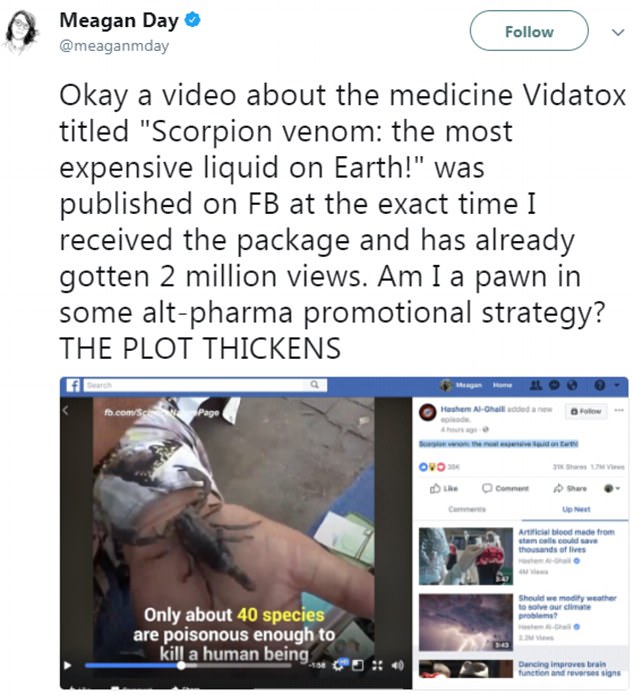 The plot thickens! In a very strange coincidence, she also saw a video on Facebook about scorpion venom the same day the package arrived

Some form of the drug has been used to reduce cancer cells in Cuban patients for over 25 years.

Though it is exported to cancer suffered around the world, the drug is not used in at all in the US, which currently has a commercial embargo against Cuba that forbids any imports from the country.

Meagan’s two-tweet tale was an emotional roller-coaster for readers, who’ve liked it thousands of times.

‘I just wanted to schvitz in style, now I’m an illegal venom owner,’ Meagan joked, adding that she was so confused and taken aback by the delivery that she was ‘malfunctioning.’ 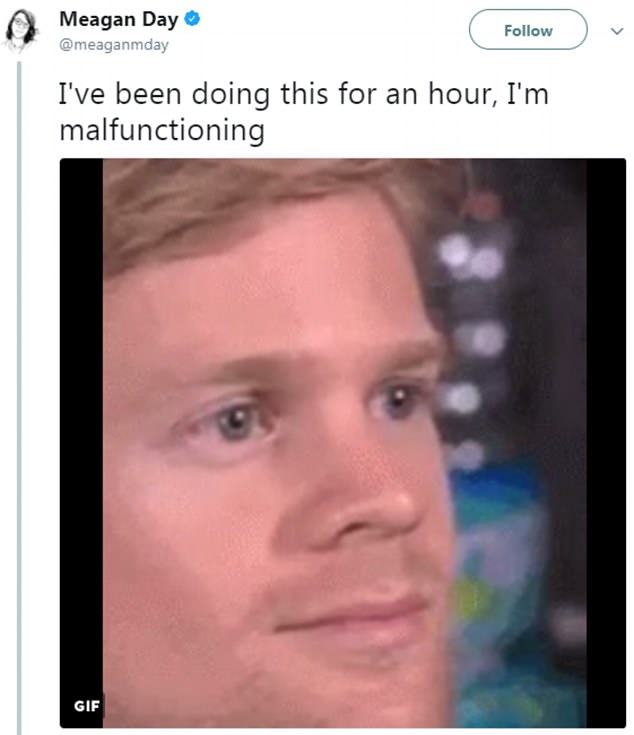 Odd indeed: Needless to say, Meagan was very confused about how such a mix-up could have been made 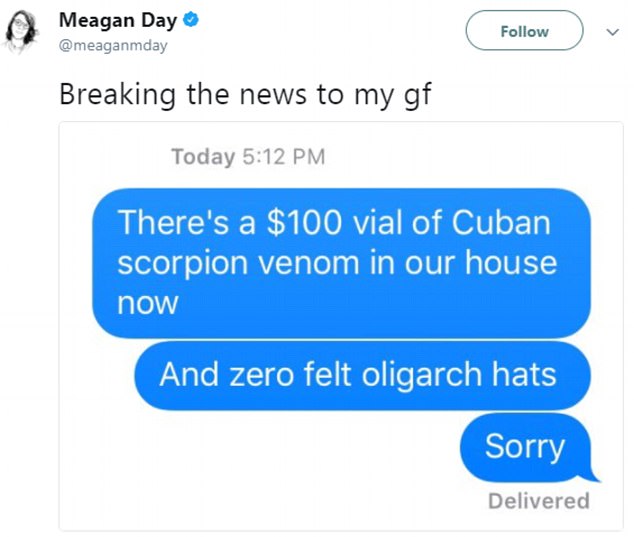 Score! She also appears to have gotten a very good deal on the Cuban drug

Not a front? This person said he ordered the same hat online and actually received the hat, not the drugs 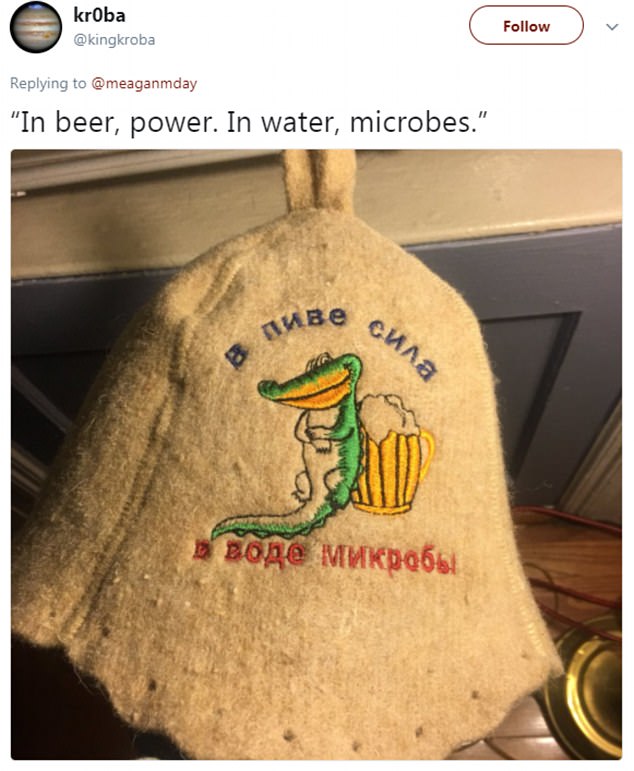 Oh well: He showed off the cap, disproving the theory that the product is a decoy

No worries: Meagan unexpectedly got refunded for her order

Upon thinking about the truly odd mix-up further, Meagan came up with an idea to explain how her felt hat became substituted for something so unexpected.

‘Theory: somewhere on the dark web are instructions to purchase these oligarchical felt hats from Amazon in order to receive the illegal scorpion drugs,’ she suggested. ‘The seller intentionally chose a bizarre niche product that no one would ever organically, mistakenly order. Except me of course.’

‘Extremely plausible that I am the only person who has ever actually wanted the decoy product,’ she added.

It’s still unclear if this is the case, as another Twitter user reported buying the same hat from the same seller without issue.

Yet the seller seems to have realized its mistake with Meagan. 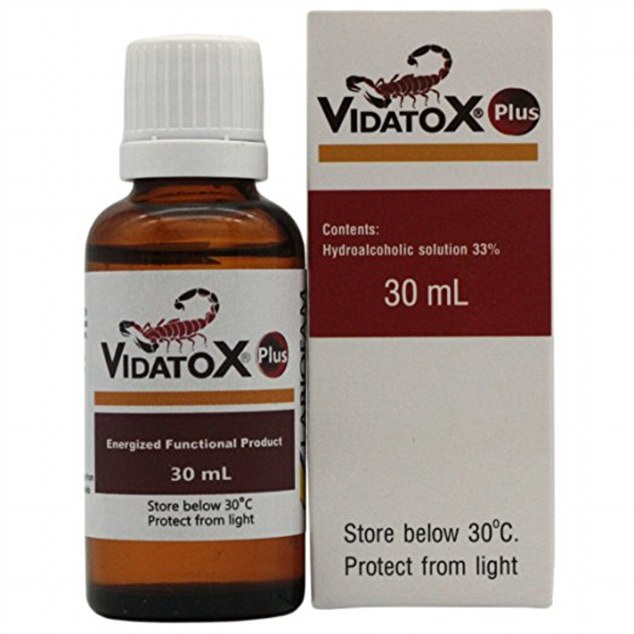 The drug has been used for over 25 years and has been seen to reduce cancer cells, but it can’t be legally obtained in the US 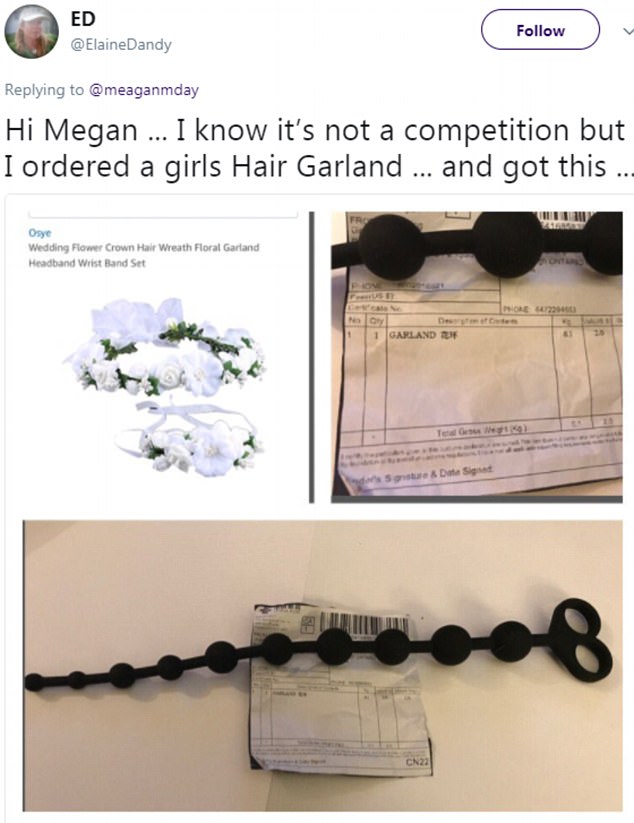 Also strange: This woman could relate, saying she once tried to buy a flower garland and got a sex toy instead 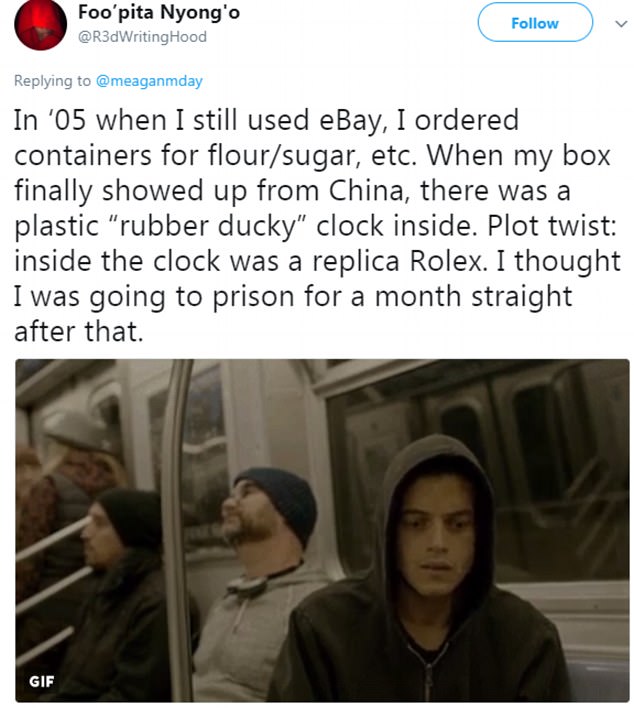 Switcheroo: Another Twitter user freaked out upon receiving a knock-off Rolex in the mail instead of a flour container 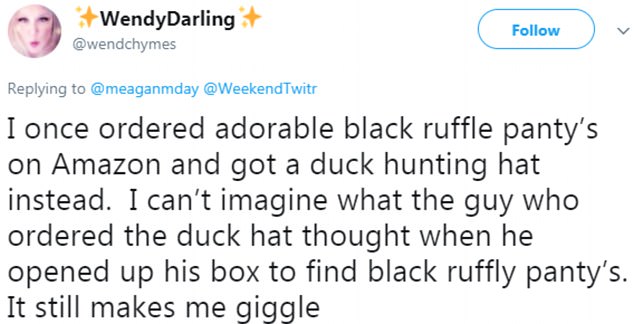 ‘Update: I was refunded for the oligarch hats without comment,’ Meagan said. ‘Also: The scorpion venom is apparently very valuable so if you have any ideas about how to capitalize on that situation in a legal way lmk thanks.’

Hundreds of other commenters have chimed in on the story, expressing awe and amusement, and also giving Meagan some tips for finding a legitimate sauna hat seller.

Yet another recalled buying containers for flour and sugar from eBay in 2005 and ending up with a rubber ducky-shaped clock that contained a knock-off Rolex inside of it.