A Nebraska mother-of-three received a double mastectomy after learning she carried a genetic mutation for breast cancer – only to learn the test results were wrong.

Maureen Boesen, 33, of Omaha, has a family history of breast cancer and learned in 2008 that she carried a mutation that gave her a 70 percent risk of also developing the disease.

She decided to remove both breasts – which would slash her risk by 95 percent – and was planning on removing her uterus and ovaries in 2018 because she was also at risk of getting ovarian cancer.

Before the planned surgery, her insurance provider told her she needed to get a second genetic test to prove she was positive for the mutation.

In a first-person account for HuffPost, Boesen revealed her utter shock when the second test – and three more after that – came back showing that she was actually negative for the mutation.

Maureen Boesen, 33, of Omaha, Nebraska, received genetic testing as part of a study in the 1990s due to her long family history of breast cancer. Pictured: Boesen at a post-mastectomy follow-up appointment at the University of Kansas Cancer Center 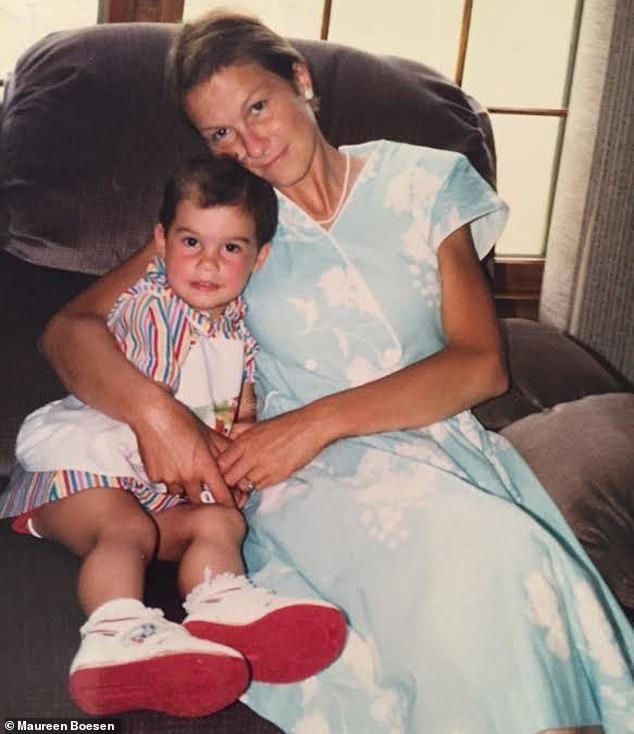 Boesen’s family history dates all the way back to 1863. At age 23, in 2008, she learned that she was positive for the BRCA1 mutation, which raises breast cancer risk to 70 percent. Pictured: Boesen with her mother, Susan, in 1990

Boesen wrote that her family has a history of hereditary breast cancer that dates all the way back to 1863.

Her mother, Susan Winn, had been diagnosed with stage II breast cancer at age 32 and her grandmother, Elda, was diagnosed with ovarian cancer in her 40s.

Between five and 10 percent of all breast cancers are believed to be hereditary and are passed down from generation to generation, according to non-profit Breastcancer.org.

The majority of hereditary breast cancers are due to mutations in two genes, BRCA1 and BRCA2.

Everybody has these genes, which repair damage to cells and inhibit abnormal cell growth.

The average US women has a 12 percent chance of being diagnosed with breast cancer in her lifetime, Breastcancer.org says.

However, women who have one or both BRCA mutations have at least a 70 percent risk of developing breast cancer.

Because of Boesen’s long family history, they were part of a study at Creighton University in the 1990s that focused on identifying breast cancer-associated genes.

All of the family members also received individual genetic testing. Boesen was only five years old at the time, and decided to learn her results at age 23. 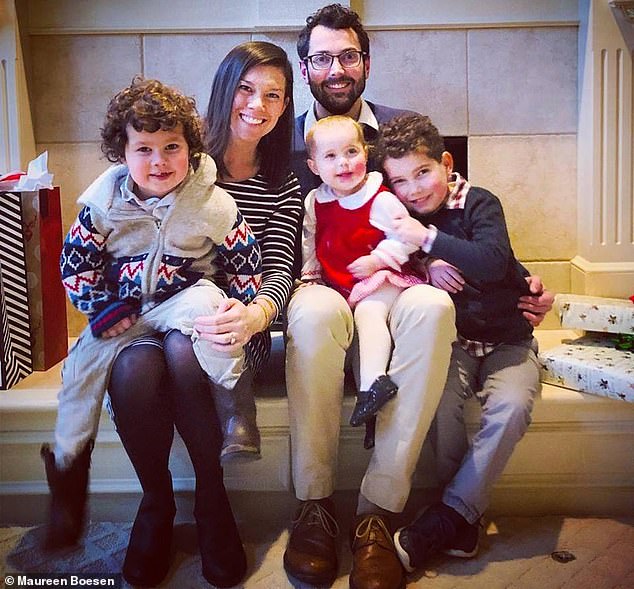 Last year, at age 33, Boesen decided to undergo a total abdominal hysterectomy with a bilateral salpingo-oophorectomy, surgery to remove the uterus, cervix, fallopian tubes and ovaries. Pictured: Boesen with her husband and three children 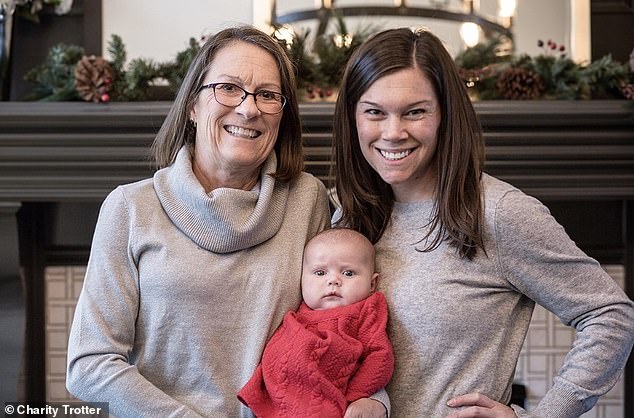 This is because around 45 percent of women with the BRCA1 mutation will develop ovarian cancer by age 80.  Pictured: Boesen, right, with her mother and her daughter, Susie, in 2017

‘I sat down with the genetic researcher who was highly regarded for his work in the field, and he told me I had tested positive for the BRCA1 mutation,’ she wrote.

‘Because of my family’s history, I wasn’t shocked by the result, but I still couldn’t help but ask him if there was any chance the test was inaccurate. He assured me it wasn’t.’

Boesen quickly decided that she was going to undergo a double prophylactic mastectomy, which is a surgery to remove both breasts.

This is the same procedure Angelina Jolie had after learning she also had the BRCA1 mutation, putting her at risk of ovarian and breast cancer.

Her mother, Marcheline Bertrand, died of ovarian cancer in January 2007.

For women with the BRAC1 or BRAC2 mutation, or who have a family history of breast cancer, the surgery can lower the risk of developing breast cancer by 90 to 95 percent, according to the National Cancer Institute,

‘I was not going to let my BRCA1 genetic mutation result disrupt my life,’ Boesen wrote. ‘I got married, had three beautiful children and went on living a very blessed life.

However, because women with the mutation also have a risk of ovarian cancer, Boesen decided to undergo a procedure known as a total abdominal hysterectomy with a bilateral salpingo-oophorectomy at age 33.

This is a surgery that removes a woman’s uterus, cervix, fallopian tubes and ovaries.

‘My grandmother died of ovarian cancer in her 40s when she still had six young children at home. I refused to let this be me,’ Boesen wrote.

Boesen wrote that she was first required by her insurance company to meet with a genetic counselor to undergo another test that proved she had the mutation before her surgery would be paid for. 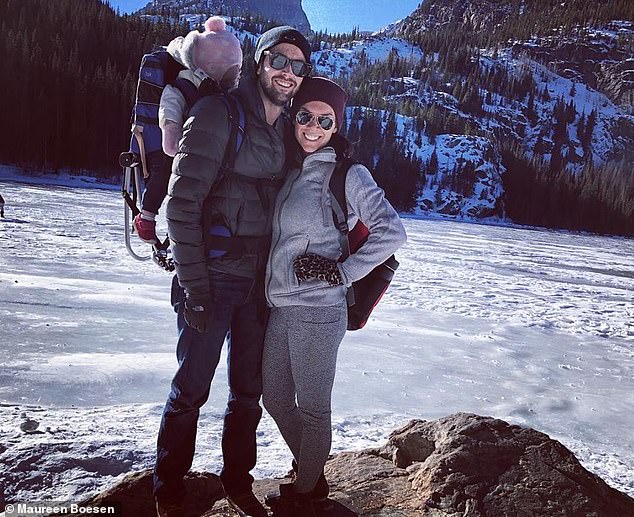 Boesen was required by her insurance company to meet with a genetic counselor to undergo a test that proved she had the mutation before her surgery would be paid for. Pictured: Boesen, right, with her husband 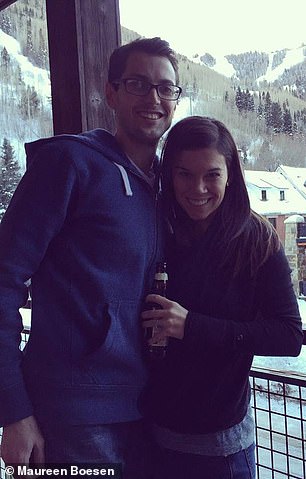 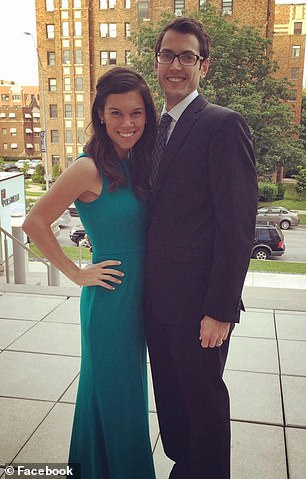 The second genetic test, and three that came after, proved that she actually didn’t have the mutation. Boesen said she hopes her story inspires others to be their own advocated. Pictured, left and right: Boesen with her husband

Four weeks later, her genetic counselor called her to discuss the results of tests, which showed she was actually negative for the mutation.

‘I sat in my office and cried uncontrollably,’ she wrote.

‘I wanted to feel grateful to be negative…but I just couldn’t get past the fact that my inaccurate test result meant I had been carrying around a devastatingly unnecessary burden for more than a decade.’

The mother-of-three first tried to contact a medical malpractice attorney, but he told her the statute of limitations had expired on her case.

Next, she contacted Creighton University, which had ran the original study. They and two other independent labs ran genetic tests, all confirming that she was negative for the mutation.

Boesen wrote that she now hopes her story will inspire others to be their own advocate and to get a second opinion if they have any doubt about what their doctor is telling them.

‘Doctors can be wrong and so can tests. You know your body better than anyone – don’t stop seeking answers and opinions until you are satisfied.’