A woman who says she’s always known she never wants to have children has spoken out about her decision to get sterilized at the age of 25.

Katelyn Stoewsand, now 27, had her fallopian tubes removed two years ago to ensure that there is a ‘zero per cent chance’ she will ever get pregnant.

The correctional case manager, from St. Louis, Missouri, underwent a salpingectomy – a procedure during which the fallopian tubes are surgically removed – after using birth control for ten years, having spent years battling horrible side effects as a result of the hormonal treatments.

Now, she is speaking out about her life-changing operation to prove to other women that they should take control of their bodies and any decisions regarding them, no matter what other people say or think.

Decision: A woman has revealed why she chose to get sterilized at the age of 25 – explaining that she wanted a form of permanent birth control because she knows she never wants kids

‘I’ve known all my life that I didn’t want children, even when I was a kid, I wasn’t interested in interacting with other kids,’ she said.

‘I’m pretty impatient around kids. I’m not much of a people person either. The biggest reason is more about my free time and being able to spend money the way I want to.’

The life-changing surgery that leaves you with a ‘zero per cent chance’ of getting pregnant: What is a  salpingectomy and how is it performed?

A salpingectomy is a surgical procedure during which one or both of the fallopian tubes are removed.

The operation can be carried out for a number of different reasons, including as part of treatment or the prevention of ovarian cancer, and treating an ectopic pregnancy, tubal blockage, or infection.

In some cases, the procedure is also performed on women as a form of permanent birth control.

In these instances, both fallopian tubes are removed – thereby preventing a woman’s eggs from meeting sperm, even if she has unprotected sex.

A salpingectomy is typically performed as a laparoscopic procedure, meaning that the recovery time is relatively short, however there are a number of possible side effects, including pain while urinating, infection, blood clots, uncontrolled bleeding, and reactions to the anesthesia.

Although Katelyn is now unable to ever conceive a child through sexual intercourse, should she change her mind about pregnancy at some point in the future, she says that IVF would still be an option for her.

‘That was intentional. I didn’t want anything that was reversible because it could fail. There’s zero per cent chance that I’ll end up with my own family.’

Katelyn started birth control pills when she was 15 before having an intro uterine device (IUD) placed a few years later.

When her IUD was nearing its expiration date, she decided to move to something more permanent and with less side effects.

‘My hormonal birth control made me gain a bunch of weight, tanked my sex drive, and made me feel depressed,’ she said.

‘I had an awful quality of life when I was on the hormonal birth control; it wouldn’t have been worth it to stay on it.’

Kaetlyn was already following a subreddit that provided a list of doctors around the nation that perform sterilization for women and found one under her insurance nearby.

The doctor initially asked her what she would do if she changed her mind or what her current partner wanted.

‘I told them I would adopt, but was sure I wouldn’t change mind,’ she said. ‘I told them my partner was irrelevant because it was my body and my choice.’

Two weeks after her exam, Katelyn was being prepared for the outpatient surgery right before an already planned trip.

‘It was an easy recovery,’ she said.

‘I had surgery on Friday and left for Boston on Sunday and walked for three hours.’

Katelyn said the people closest to her were supportive of her decision.

‘It was co-workers and acquaintances that had the most to say, which shocked me that they felt they had the right to have an opinion on that,’ she said.

‘But as far as people who matter, they’ve been super supportive.’ 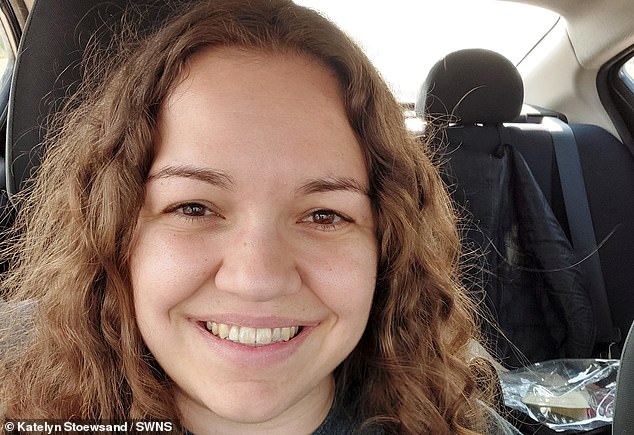 Life-changing: Katelyn Stoewsand, now 27, underwent a salpingectomy – a procedure during which both fallopian tubes are surgically removed – two years ago and says she has no regrets

Katelyn said her decision was also influenced by her mother figure who never put pressure on her to become a mother herself.

‘She always presented it to me as a choice that I was going to get to make,’ she said.

‘She always told me how much work it was, and I was never interested and along with her I came to the decision that I didn’t want to be a parent.’

Katelyn stressed the importance of women being able to control their own reproductivity.

‘A lot of doctors are male, and it makes me sick to my stomach that this is what some women want to do and they’re being told no,’ she said.

‘Showing women that it’s possible to find the right doctor and showing them it’s not a lost cause for what they want is really important.’

She also stressed normalizing women not wanting to have children.

‘It’s important to normalize not wanting to be a parent and not making it taboo to not want a family,’ she said.

She encourages others who are interested to research the procedure and make sure it’s what they really want.

‘If you’re on the fence, I wouldn’t recommend getting sterilized because it’s irreversible,’ she said.

‘You should make absolutely positive that it’s what you want. If you do decide, I would recommend being confident when speaking with doctors and keep on keeping on.

‘I got really lucky that I didn’t have any doctors turn me away, but I know some women work years to find a doctor that’s willing to do it. But keep trying because it’s your body to do what you want to.’