Woman has a leg blown off trying to reach Bangladesh

A Rohingya woman has had her leg blown off by a landmine while fleeing Myanmar as the country plants explosives at its border with Bangladesh to prevent the return of the stateless minority, government sources in Dhaka claimed.

As the news of the refugees being maimed filtered through to Indonesia, protesting Islamists in Jakarta chanted ‘Allahu Akbar’ and demanded punishment for Myanmar as rallies popped up across the globe.

Bangladesh will today formally lodge a protest against the laying of land mines so close to the border as the number of Rohingyas fleeing Myanmar amid clashes between insurgents and the army reached 146,000.

An injured elderly woman and her relatives rush to a hospital on an rickshaw, near the border town of Kutupalong, Bangladesh, on Monday, after her leg was blown off 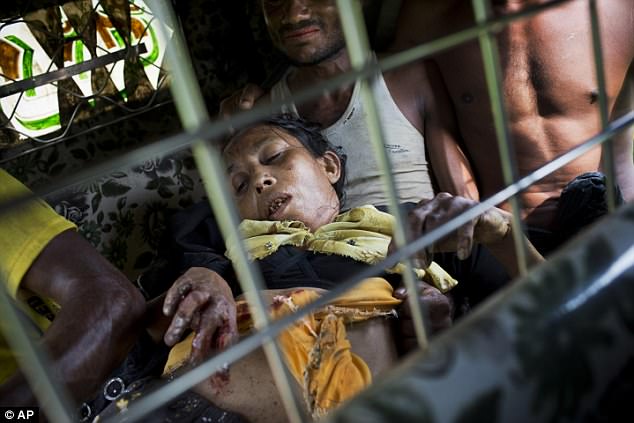 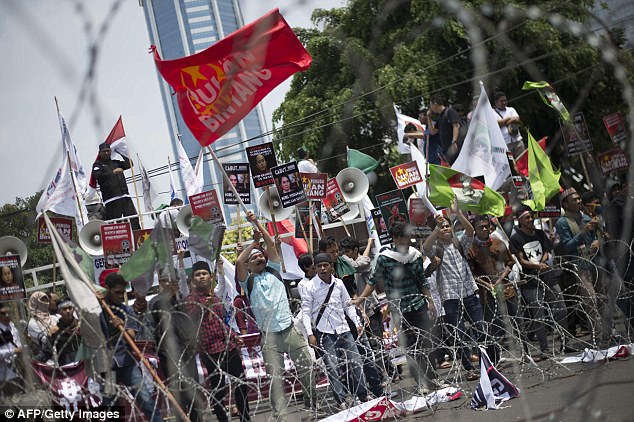 Indonesian demonstrators are seen through barbed wire during an anti-Myanmar rally nearby its embassy in Jakarta on September 6, 2017 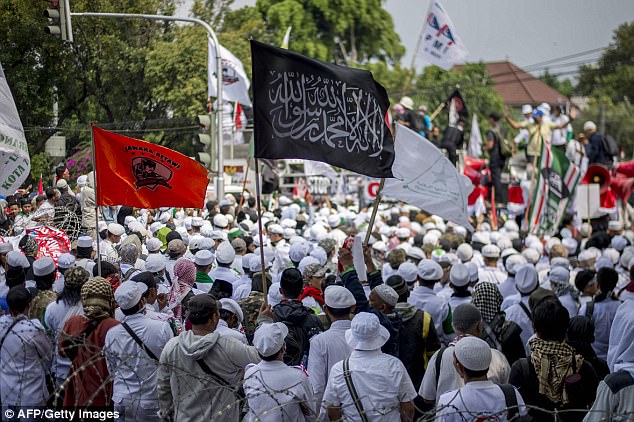 A source, who asked not to be named, said: ‘They are putting the landmines in their territory along the barbed-wire fence.

‘Our forces have also seen three to four groups working near the barbed wire fence, putting something into the ground.

‘We then confirmed with our informers that they were laying land mines.’

The sources did not clarify if the groups were in uniform, but added that they were sure they were not Rohingya insurgents.

One of those who fell victim to the mines was a woman whose leg was mutilated as she tried to cross the border.

Myanmar army has not commented on the blasts near the border and the silence has added fuel to the fire.

Global protests in Chechnya, Indonesia, Pakistan, Germany and Australia have all condemned the latest developments. 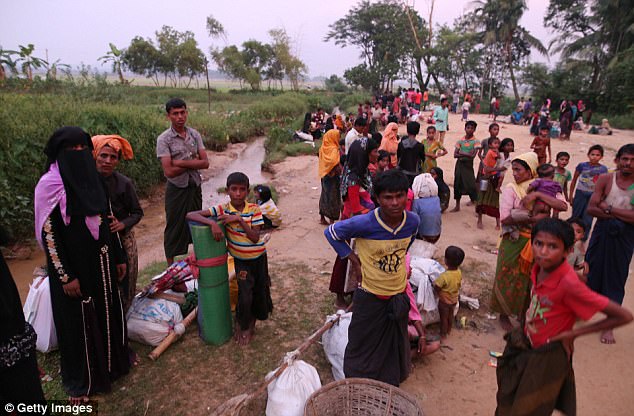 Rohingya Muslims walk towards Bangladesh after crossing the border at night 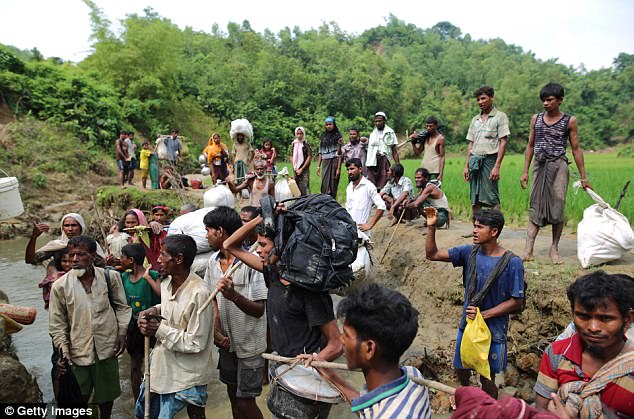 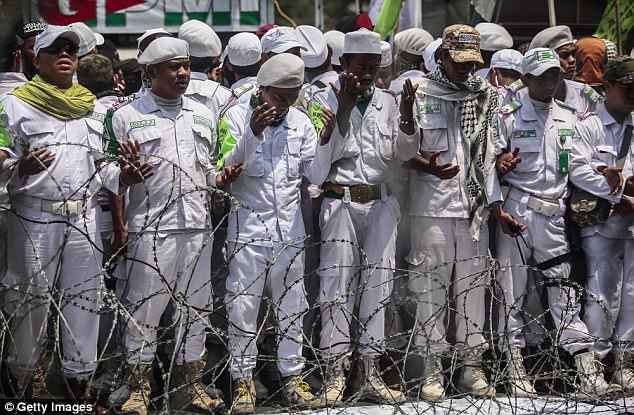 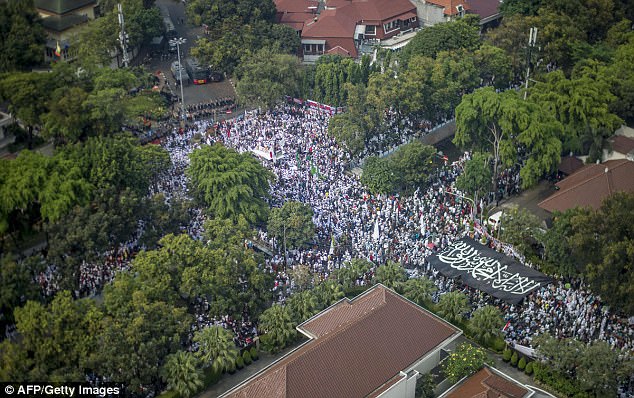 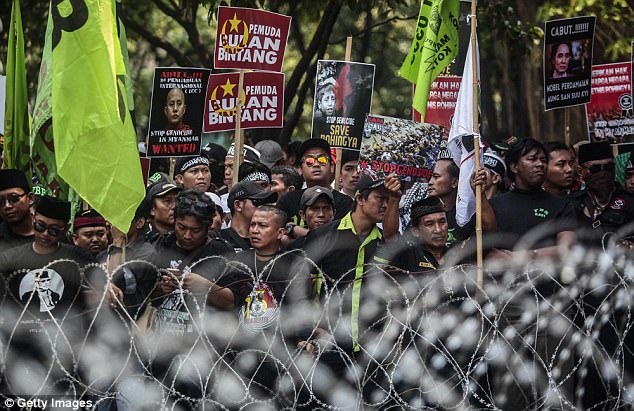 Indonesian Muslims hold banners and shout slogans during a protest outside the Embassy of Myanmar in Jakarta. While some protesters chanted ‘Allahu Akbar’, meaning God is great, others shouted slogans such as ‘Slaughter Myanmar’ and ‘Burn the embassy’

Thousands of Indonesians, led by Islamist groups, held the rally near the Myanmar embassy in Jakarta on Wednesday to protest against the treatment of Rohingya Muslims and demand the snapping of ties between the two countries.

While some protesters chanted ‘Allahu Akbar’, meaning God is great, others shouted slogans such as ‘Slaughter Myanmar’ and ‘Burn the embassy’. 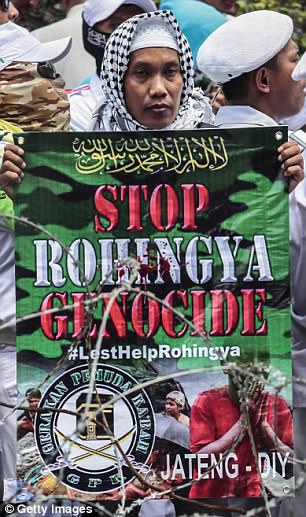 Indonesia has the world’s largest population of Muslims and there have been several anti-Myanmar protests in Jakarta and the Malaysian capital of Kuala Lumpur over the treatment of Buddhist-majority Myanmar’s roughly 1.1million Rohingyas.

Roads were blocked and barbed wire barriers put up around the embassy, in a leafy district of the capital, which was patrolled by police in riot gear who set up water cannons.

Around 146,000 Rohingyas have been forced to flee clashes between Rohingya insurgents and the army in Myanmar’s northwestern state of Rakhine.

Tens of thousands have crossed the border into neighbouring Bangladesh.

Some protesters at the Jakarta rally called for the expulsion of the Myanmar ambassador over the issue, as well as for diplomatic ties between the two countries to be severed.

‘It is the responsibility of the host countries to ensure the safety of all diplomatic missions and their personnel,’ the spokesman said. ‘Indonesia takes this responsibility seriously.’

At the weekend, a petrol bomb was thrown at the embassy causing a small fire.

Indonesian police have also pledged to bar Islamist groups from staging a rally on Friday at the Borobudur Buddhist temple in central Java to protest against the treatment of Myanmar’s Rohingya Muslims.