Woman has dropped four dress sizes due to an app

A woman who became diabetic after gorging her way to more than 17-and-a-half stone has dropped four dress sizes after using a £6.99 hypnosis app.

After struggling to lose weight via diet and exercise, Tracey Hoff, 52, from Chichester, West Sussex, has gone from a size 24 to 16 and no longer requires insulin injections after downloading the ‘Virtual Gastric Band-Lose Weight Fast’ app, which changes how people think about food.

Ms Hoff, who gained weight after gorging on gourmet sandwiches in The Body Shop head office’s American diner-style staff canteen, said: ‘Before, I was far too big. I could barely even walk. I’d push myself to eat until I felt physically sick, but now I know how to recognise when I’ve had enough.

‘I take my time and chew all my food properly. It doesn’t take more than about six mouthfuls to stop my hunger.’

The former carer, who was forced to give up her career due to ill health, is hopeful her weight loss may eventually help her reverse her type 2 diabetes.

Now just one stone off her goal weight, Ms Hoff is sharing her story to raise awareness on World Diabetes Day. 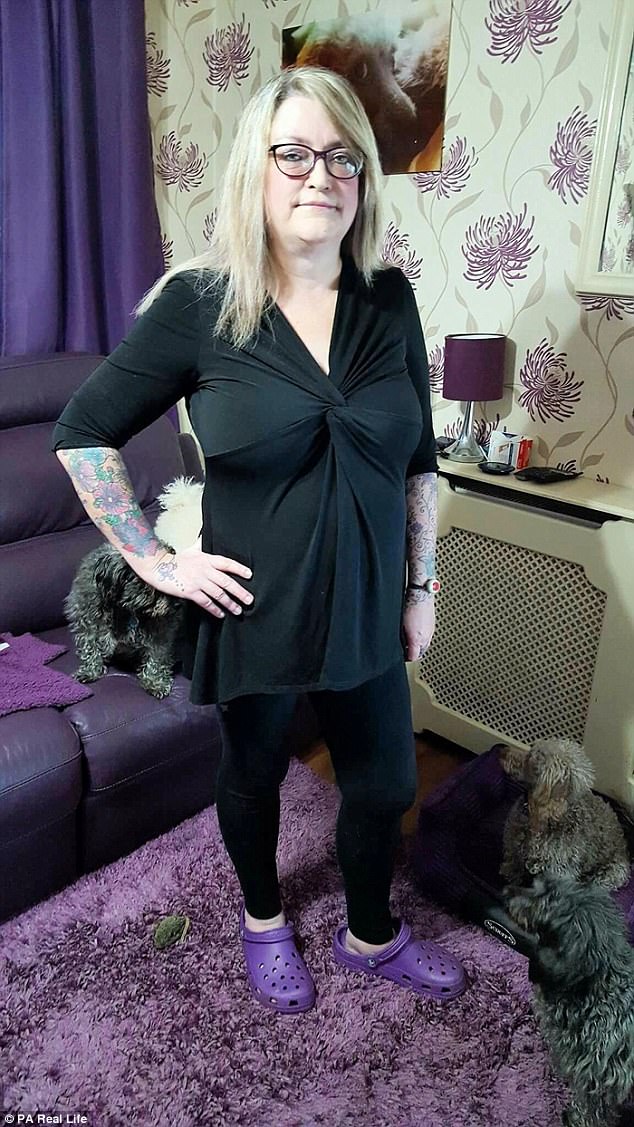 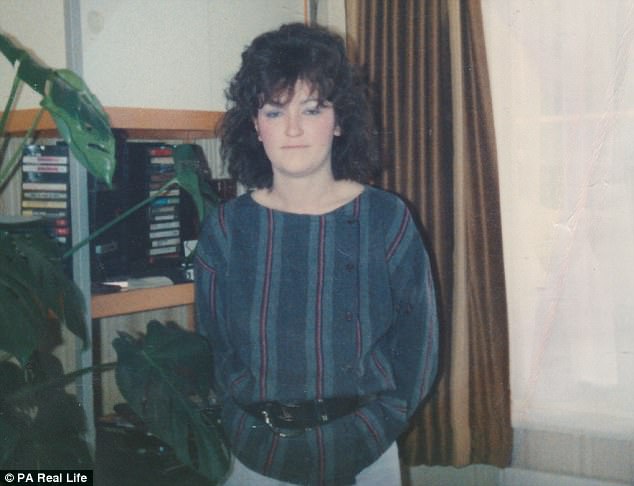 Ms Hoff, who tipped the scales at 17.5 stone, gained weight in her forties (pictured at 17)

WHAT IS THE VIRTUAL GASTRIC BAND-LOSE WEIGHT FAST APP?

Without calorie counting, the app teaches people to eat until they are no longer hungry, rather than full, as well as encouraging them to chew their food properly.

It also includes food and water diaries to allow users to track their intake.

Before and after photos help people see their progress.

It also comes with 100 weight loss tips and membership to a Facebook support group with other users.

‘The app tells you to eat what you want, not what you can’

Unable to shift the pounds via diet and exercise, Ms Hoff worried she would be overweight for the rest of her life, until in summer 2016, she noticed an online article about a hypnotic gastric band app.

Ms Hoff, who is a single mother to daughter Emma, 22, said: ‘The app tells you to eat what you want, not what you can.

‘It also says to eat until you’re no longer hungry, not until you’re full. There’s actually a huge difference, which took me a long time to realise.

‘One of the biggest things I’ve learned is how easy it is to mistake hunger for thirst. Now, if I think I feel hungry, I’ll have a tumbler of water and wait 10 minutes. Usually, the feeling then goes away.’

Without drastically changing what she eats, listening to the app while she sleeps has led to Ms Hoff being just over a stone away from her 12 stone goal weight. 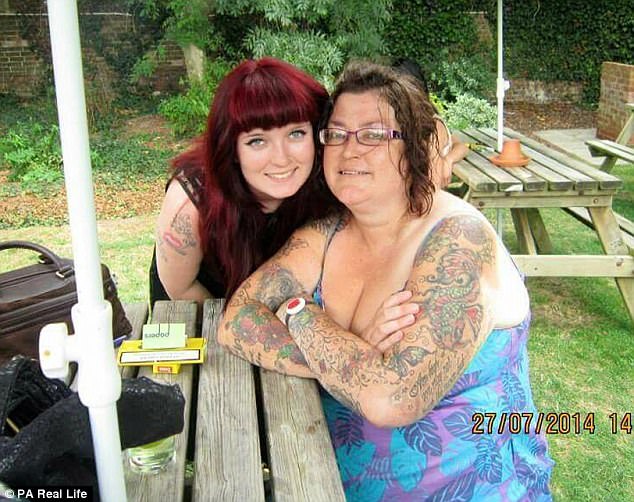 The app ‘reprogrammes’ how people think about food (pictured with her daughter Emma, 22) 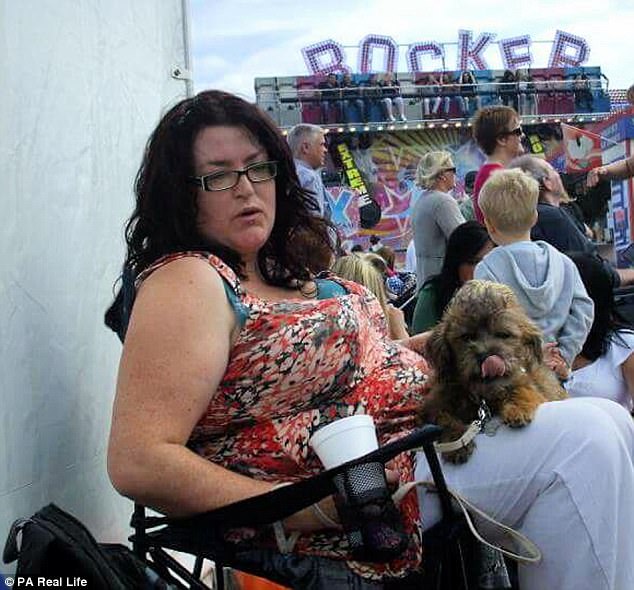 Ms Hoff now eats until she is no longer hungry, not full, and chews her food properly 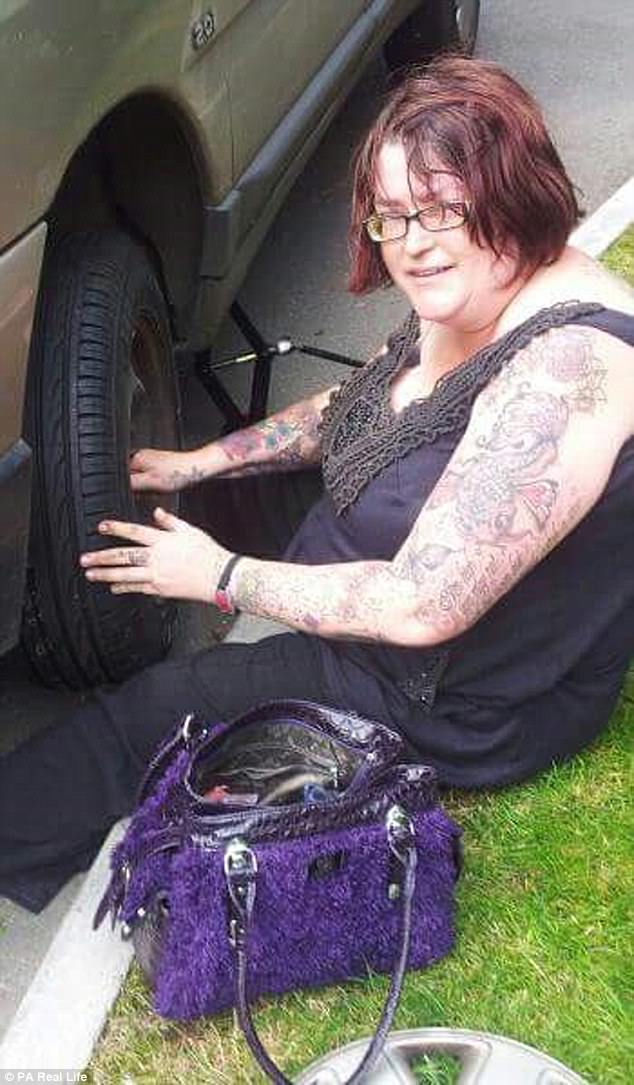 ‘This has been life changing for me’

As well as dropping from a dress size 24 to 16, Ms Hoff has also come off her insulin injections.

She said: ‘At my unhealthiest, my glucose readings would be around 18, but sometimes as high as 28. Now they’re around nine, which isn’t perfect but it’s a huge improvement.’

She said: ‘Though my COPD means my lungs will never magically be fixed, losing the weight has improved my lung function too, taking it from 49 per cent to around 55 per cent.

‘Before, I was far too big. I could barely even walk. I’d push myself to eat until I felt physically sick, but now I know how to recognise when I’ve had enough.

‘I take my time and chew all my food properly. It doesn’t take more than about six mouthfuls to stop my hunger.’

Ms Hoff hopes the app will eventually help her reverse her type 2 diabetes.

She said: ‘It is possible to reverse type 2 diabetes and, hopefully, now I no longer need injections, I’m on my way to that.

‘The hypnosis app is so easy to use. I’m in a Facebook group of other people using it and they’re all so supportive. This has been life changing for me.’ 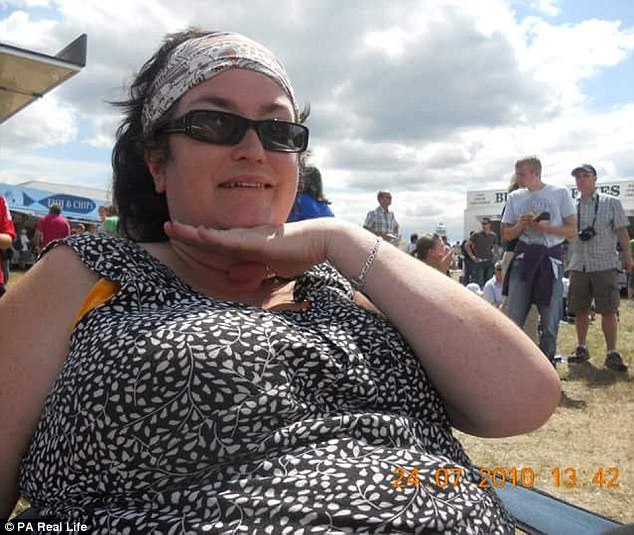 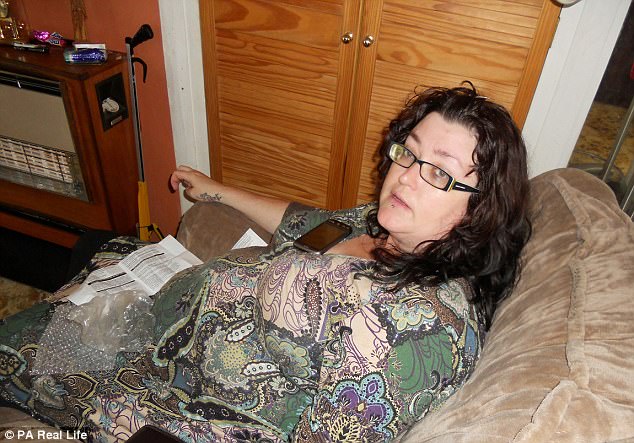 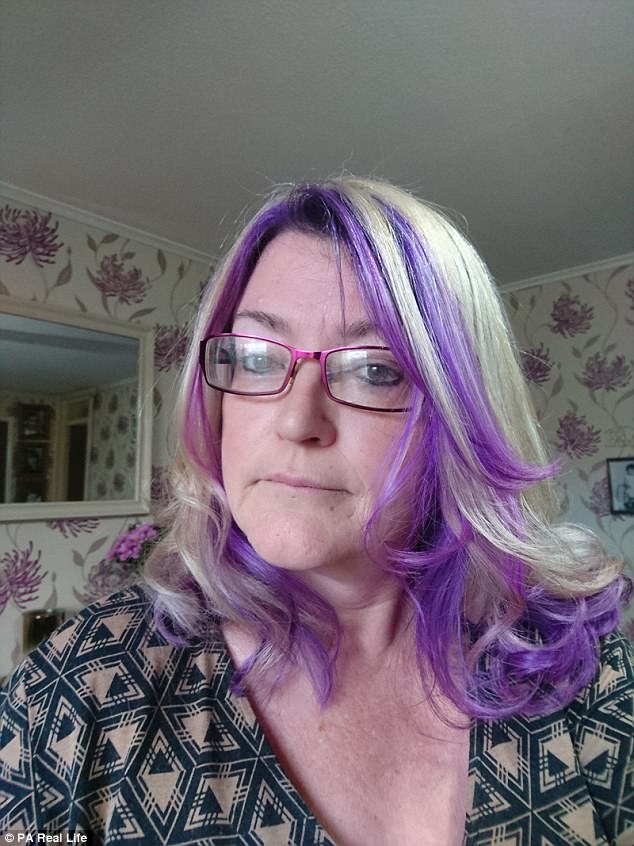 ‘I just got bigger and bigger’

Ms Hoff, who was underweight as a teenager, started to gain weight in her twenties after landing a job at The Body Shop’s head office where she would wolf down fatty food in their canteen, before snacking on crisps and sweets throughout the afternoon.

Ms Hoff whose glucose levels sometimes reached more than four times the recommended levels, said: ‘I just got bigger and bigger. Eventually, a district nurse weighed me during a routine appointment in 2015, and I couldn’t believe it when the scales said I was 17st 7lb. I’d no idea I’d got that big.’

Her weight gain led to her developing type 2 diabetes in her early forties. She said: ‘Doctors were finding my diabetes hard to control. Eventually, it couldn’t be managed with just tablets, so around eight years ago, I started having three large insulin injections every day.’

Ms Hoff struggles to exercise as she also suffers from both COPD, which makes breathing difficult, and cough syncope, which causes her to become unconscious after coughing.

At age 50, Ms Hoff joined a local slimming group, however, the emphasis on food caused her to be more tempted.

She said: ‘It was food, food, food all the time. All we talked about was what we could and couldn’t eat.

‘Not only that, but they’d sell food there, too. It’d be right in your face, when you were lining up to go in, calling to me to buy and eat it while I queued.’

‘This comes with a host of powerful hypnosis sessions that help to reprogramme their way of thinking, allowing them to become more mindful about their eating.

‘Our programme frees you from a lifetime of dieting by getting to the root of your problem and changing the way you think about food. It literally turns people’s lives around, as Tracey has shown with her fabulous success story.’ 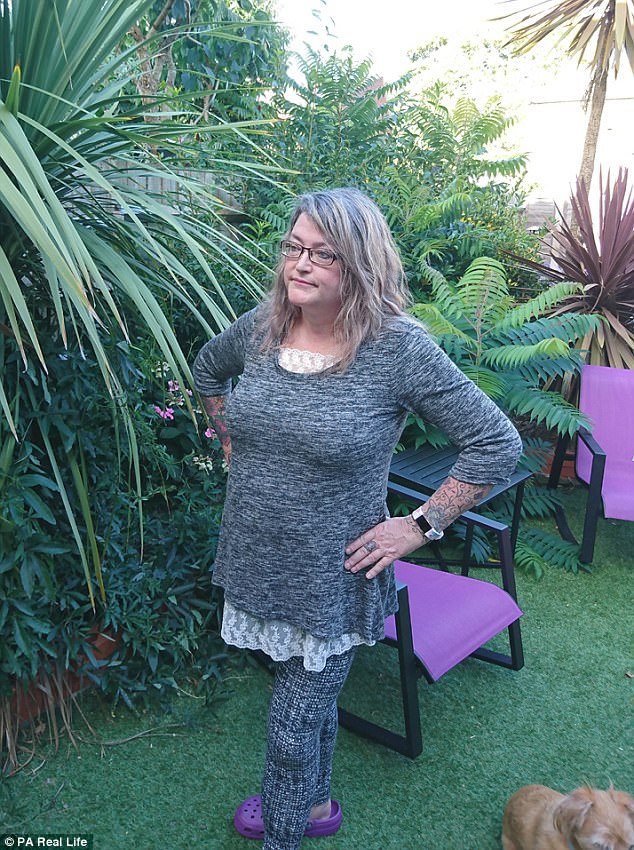 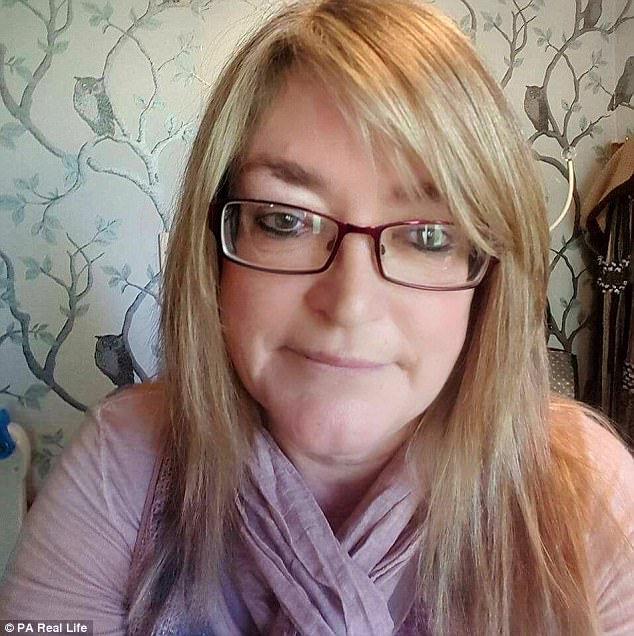 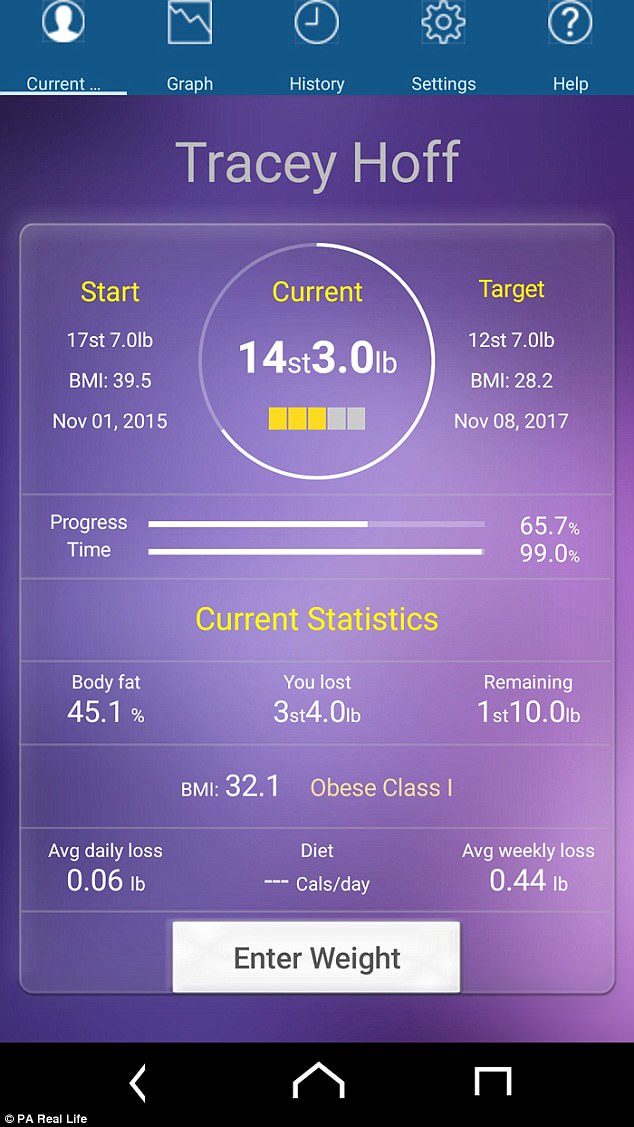 Ms Hoff listens to the app, which costs £6.99 to download, while she sleeps