Woman has parcels delivered to her boyfriend to hide shopping habit

A woman with a serious online shopping habit has revealed the clever way she hides her spending from her in-laws.

Twitter user @Gerbychic, from London, lives with her boyfriend and his parents, and doesn’t want them knowing how much money she spends online.

She told how she has recently started having her parcels delivered in her boyfriend’s name so he gets the blame for all her purchases.

Her tweet has now gone viral, with hoards of other women saying they were going to try the same trick.

Twitter user @Gerbychic , from London, gets all her parcels delivered under her boyfriend’s name for one very sneaky reason

Gerbychic, who doesn’t user her real name on her Twitter account, said her boyfriend’s parents don’t suspect anything.

She tweeted: ‘Currently living with my boyfriends parents and don’t want them to think I’m wasting all my money on parcels so addressing them all under my boyfriends name

‘And when he’s not around agreeing with them about how he’s wasting all his money on deliveries. Sorry hun x.’ 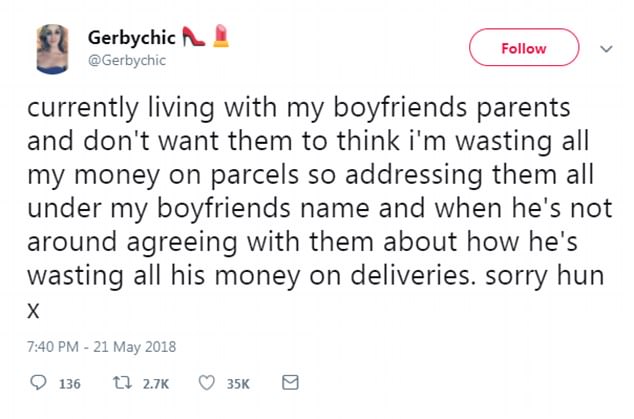 She is worried that her boyfriend’s parents will judge her for buying so many things online, so wants them to think they’re his deliveries-

Other Twitter users found the post hilarious, with one tweeting: ‘I do this too! Sooo glad I’m not the only one omg [sic].’

‘This is diabolical genius. You’re going to go far in life,’ another said.

A third wrote: ‘Need to start doing this to my house so my own Mam and Dad stop judging me.’

Others even suggested ways that Gerbychic could be even more sneaky about hiding her parcels.

The tweet has since gone viral, and other Twitter users have given her tips about how to be more sneaky about it

One said: ‘My husband leaves for eork right before the mail is delivered. I have time to throw the boxes out before he comes home lol.’

‘STOP THIS!!! Incredible! So doing this from now on. (Gonna spell his name slightly wrong so I know tho)’ another posted.

A third admitted: ‘I used to get things delivered to work/my friends to make sure my ex’s mum didn’t see how much I ordered.’

‘I do this when my elderly neighbour signs for mine ”oh what’s she been ordering now,”’ a fourth said.