Woman has to wait hours for ambulance after fall in Boston, Lincolnshire

An 84-year-old woman was left lying on the street for three hours waiting for an ambulance after a fall – despite a passer by dialing 999 13 times to get her help sooner.

Dorothy Smith, took a tumble near the B&M store in Boston, Lincolnshire at around 11am yesterday.

Her husband Derrick, who was in an electric wheelchair beside her, said she lost her footing on uneven ground.

East Midlands Ambulance Service has apologised to Mrs Smith for any ‘distress’ that was caused to her and said at the time it was holding 77 emergency 999 calls that required an ambulance response.

Dorothy Smith, 84, was left on the street for three hours after falling outside a branch of B&M

Speaking after her fall yesterday afternoon, Mr Smith said: ‘She fell and I couldn’t do anything to help her. The ground is uneven in places, and this needs looking at. She is in a lot of pain and has been lying on the cold ground for a couple of hours.

‘We have been told she is not a priority. I know it isn’t the ambulance staff’s fault but the way the service is, it’s not on.’

The couple had travelled from their home in Heckington, Lincolnshire to buy some new clothes from M&S – but never made it there.

Norman Mansell, coach driver for Hunt’s Coaches, heard a woman had fallen while in the town and ran to her aid.

‘She was freezing cold so I went to the police station to get her a thermal blanket. Even the police called the ambulance.

‘We could not move her as I think she may have broken her collarbone. Her leg was also very swollen.

‘It’s disgusting that she was left for so long. She’s 84 and has recently had a hip replacement. This woman should have been made a priority.

‘The staff and B&M have been great – they provided cushions and blankets for Dorothy. One staff member also stood behind her with a cushion to support her so she didn’t roll backwards.

‘It was very cold with a brisk cold wind so Dorothy was freezing.’

A doctor from the hospital and community health staff gathered around Dorothy and stayed with her until the ambulance arrived, around three hours after the first 999 call was made. 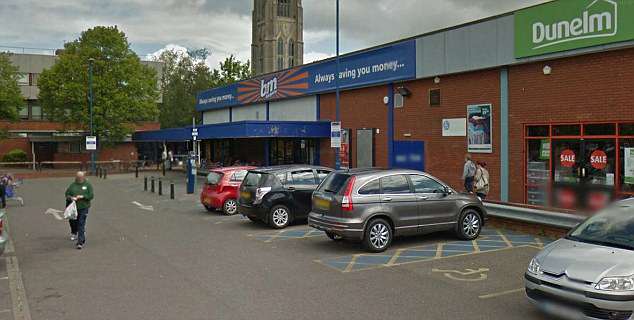 Mrs Smith, 85, was left lying on the ground for three hours waiting for an ambulance to arrive

Brian Jaffery, ambulance operations manager, said: ‘It is important that we provide the right response at the right time for our patients, unfortunately this can sometimes mean delaying help to a non-emergency patient to save the life of another.

‘At the time of Dorothy’s call we were holding 77 emergency 999 calls that required an ambulance response.

‘Every 999 call is assessed based on the information we are given and while we aim to get to all patients as quickly as possible, those experiencing a life-threatening emergency such as cardiac arrest or breathing difficulties have to be seen first.

‘We prioritise all our patients based on their medical need. In this case, the patient has suffered non-life threatening injuries.

‘We are sorry for the distress that this has caused to Dorothy. To enable us to investigate this fully for the patient, we would welcome our Patient Experience team speaking to Dorothy and her husband about the incident.’