An irate woman screamed racist abuse at Telstra workers and told them to ‘go back to China’ after they asked her questions to ensure coronavirus safety.

Video footage showed the shopper scream at the floor manager inside the store at Miranda, in Sydney’s south, at about 11am on Thursday.

Customers who enter Telstra stores are required to apply hand sanister and answer a series of questions, including whether they have recently been overseas or have flu-like symptoms.

The woman – who declared herself ‘Queen of Australia’ – told the worker he would ‘be deported’ during her bizarre rant.

Video footage showed a woman scream at a Telstra floor manager inside the store at Miranda, in Sydney’s south, about 11am on Thursday

‘No, you’ll be leaving and I’ll be making sure that your whole family will be deported,’ she said when asked to remove herself from the store.

‘It doesn’t matter that you were born here because I am the queen of this country… Do you understand that?’

The woman appeared to ignore 1.5metre social distancing guidelines by holding a camera close to the Telstra worker’s face.

The man – who was wearing a face mask – repeatedly said ‘good on you’ as he was racially abused.

She responded: ‘Good on me. You have been served your eviction notice with your whole family.’

The manager told the customer to ‘leave now’ but the woman fought back and demanded he shared his name.

‘Turn your badge around so I can see that,’ she said as the Telstra worker also asked after her name.

The video abruptly cut off.

Additional footage showed the altercation moved to the front of the store where the woman screamed ‘go home to China’ in the man’s face. 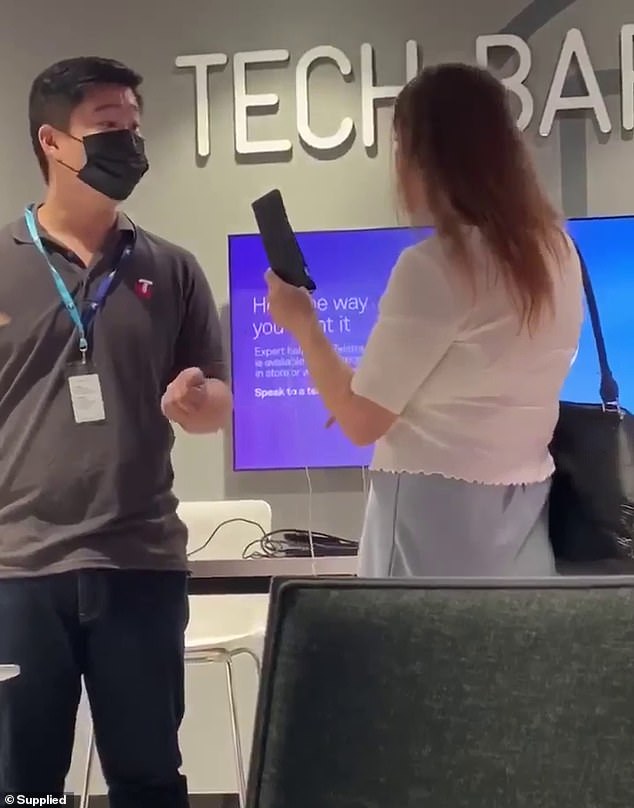 ‘No, no, no, you’ll be leaving and I’ll be making sure that your whole family will be deported,’ she said

The Telstra employee was supported by two other men as the woman aggressively pointed at the trio.

‘My family is going to make sure this shop is shut down immediately,’ she said.

The woman walked off before she turned around and added: ‘And you are too, India.’

‘We are here to help you, we are not here to be scolded,’ he said.

‘I just feel for the Asian Chinese community. It’s not fair on us during these times.

‘We are being mocked and treated like second-class citizens.’ 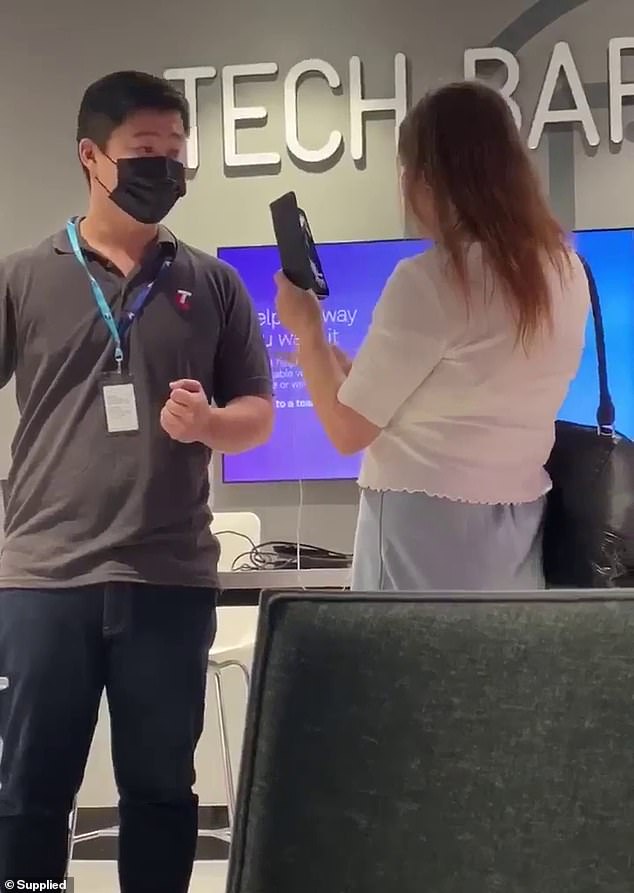 The woman appeared to ignore 1.5 social distancing guidelines by holding a camera close to the Telstra worker’s face

It’s understood the woman refused to be served by an Asian worker and left the store before police arrived.

A NSW Police spokeswoman said they were aware of the video circulating online.

‘The matter is now under investigation by officers attached to Sutherland Shire Police Area Command,’ the spokeswoman said.

‘No further information is available at this stage.’

Sadly, it’s not the first racist attack to be caught on camera during the coronavirus pandemic.

‘I really wanted to hit back’: Sisters ‘who were called Asian dogs with coronavirus’ relive their terrifying ordeal – as girl, 17, is accused of SPITTING at them during racist tirade

A teenage girl has been charged after she allegedly spat at and racially abused two women in Sydney’s inner west.

Shocking footage obtained by Daily Mail Australia on Monday afternoon and shot in Marrickville showed two women copping a torrent of racist abuse before one of them was spat at.

In a reference to the coronavirus outbreak and its origin in a food market in the Chinese city of Wuhan, the siblings were told they ‘brought corona here’.

The argument broke out in the streets of Marrickville, in Sydney’s inner west, at around 3pm on Monday, with a woman in grey (pictured) racially abusing two sisters

A woman in grey was captured on footage screaming: ‘I’ve got a knife in my bag… you little Asian dog.’

Police will allege that the two women were approached by a 17-year-old girl and verbally abused with racial slurs while crossing Petersham Road at Illawarra Road at around 3pm on Monday.

Officers said the teenager allegedly attempted to kick one of the young women, before a bystander intervened and told her to leave.

As she walked away, the teenager allegedly spat towards the younger woman – hitting her in the eye – before leaving the scene, police said. 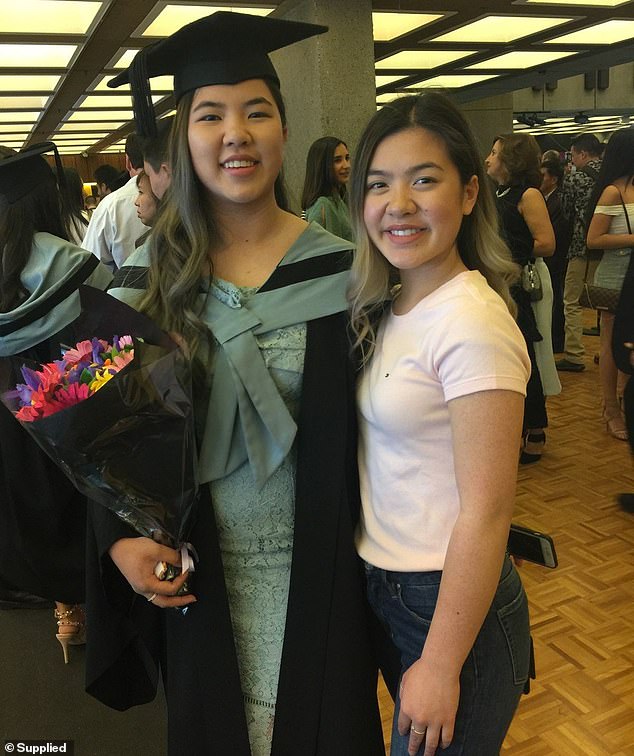 Sophie (pictured, left, with sister Rosa) said no one should be able to get away with racial attacks, which have ramped up in recent months due to the COVID-19 pandemic

‘She had pretty good aim, it hit my eye,’ Rosa told Nine News.

‘Straight in my left eye. It got in my hair, my cheek, everything. I was flabbergasted.’

Her sister added: ‘It was horrifying. I really, really wanted to retaliate.

‘I really wanted to hit back, it took everything in me not to.’

The 19-year-old was helped by witnesses to flush her eye out and seek medical assistance.

Police arrested a 17-year-old woman on Tuesday afternoon and charged her with three counts of common assault, use offensive language in/near public place, and two counts of attempt stalk/intimidate intend fear of harm.

The teenager was granted conditional bail to appear before a Children’s Court on May 1. 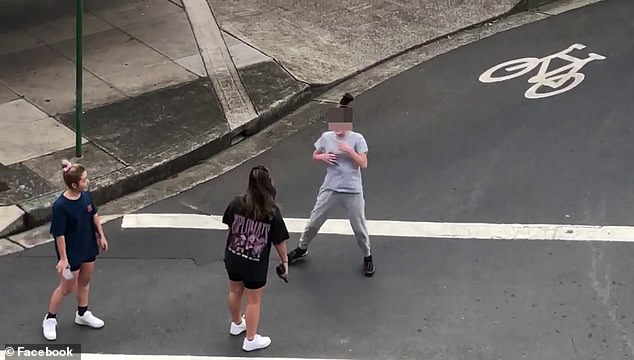 Video captured by the sisters and shocked onlookers shows the woman (pictured, in grey) allegedly scream at the young women 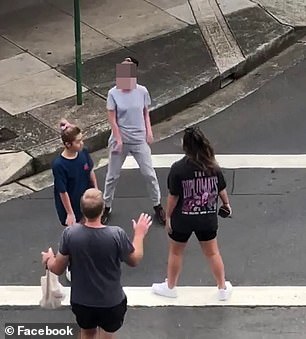 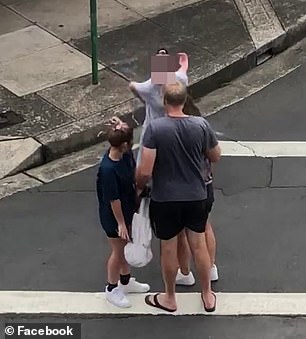 The woman in grey (pictured, centre) was captured on the footage screaming: ‘I’ve got a knife in my bag you little Asian dog’

Police spoke with a second teenage girl who was released without charge.

‘We’re arresting and charging people for spitting and coughing on people every day,’ he told reporters.

‘It’s a disgrace, putting aside the racial slur. We will take action.

The sisters said the ordeal was terrifying. 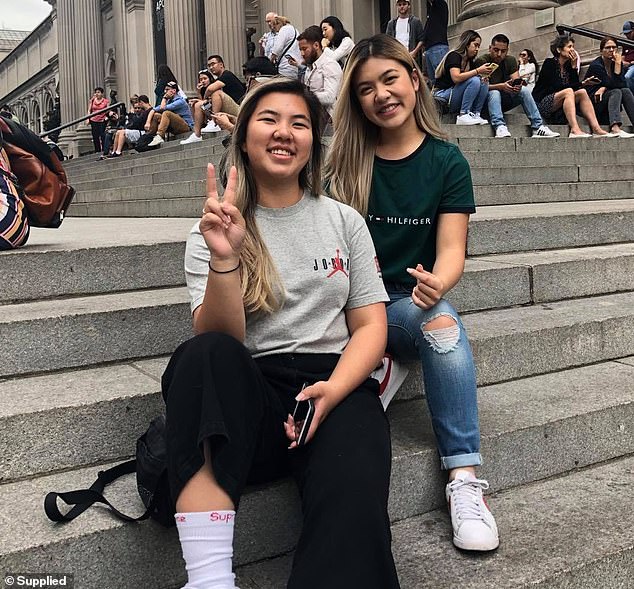 Sophie (pictured, left with her sister Rosa) said hate crimes against Asian people had increased since the coronavirus pandemic began 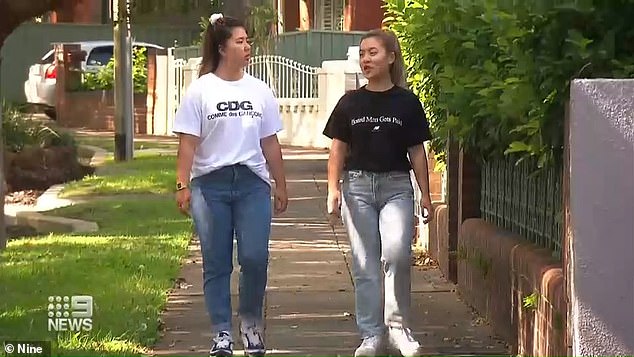 Sophie (pictured, left) and Rosa (right) said they were not going to tolerate racist attacks

‘I simply could not tolerate it so I yelled back and said ”Excuse me? What did you just say? Say it again”,’ Rosa said.

The 19-year-old university student said the two women continued to taunt her and her sister.

‘Get out of here now, who do you think you’re talking to,’ the woman allegedly screamed while shaping up to the sisters.

Rosa said the young women started walking away before coming back to abuse them again. 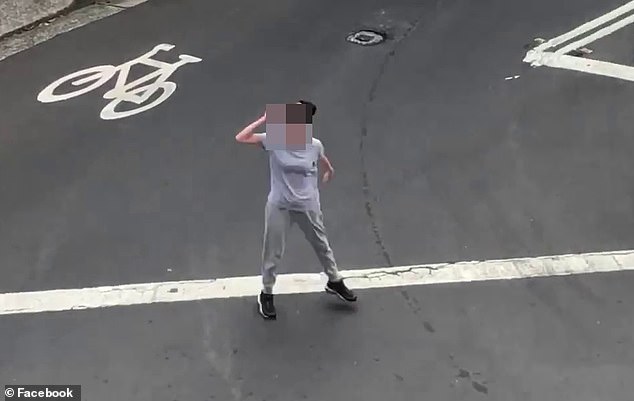 ‘You brought corona here. Eat a bat again you dumb wh***,’ a woman (pictured) was heard screaming while walking away 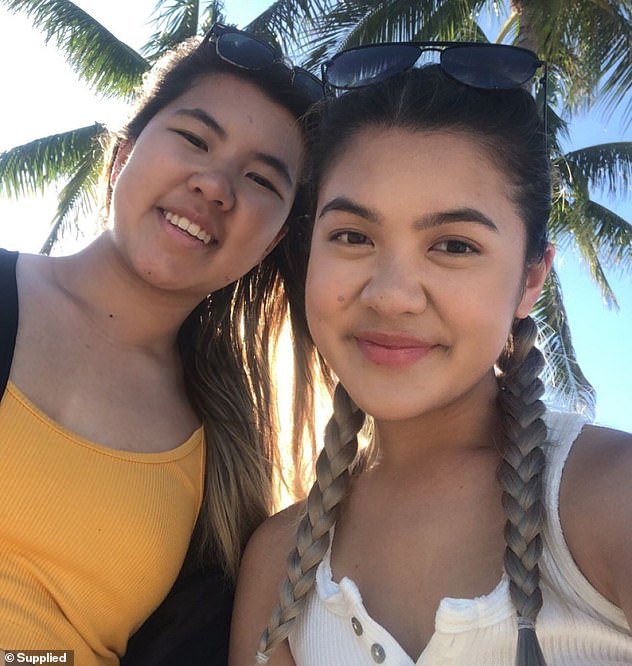 ‘She was untying her jumper from her waist and putting her bag on the ground, ready to fight me,’ Rosa said.

A woman was then seen trying to kick Rosa’s back, but Sophie quickly managed to pull her away.

Sophie said no one should be able to get away with racial attacks, which have ramped up in recent months due to the COVID-19 pandemic.

‘Hate crimes against Asians have increased and I’ve seen disgusting videos from all around the world. I never thought I’d be in one,’ Sophie said.

‘It made me feel afraid for my sisters’ safety. I knew that if I retaliated, it would’ve ended badly for us both. 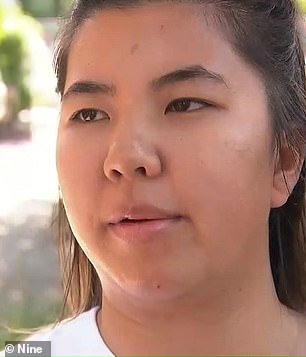 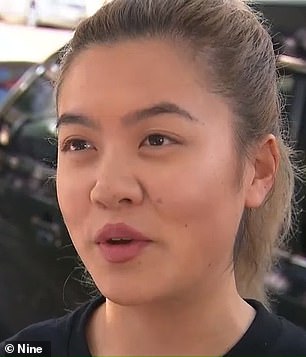 Sophie Do (pictured, left) and her sister Rosa (right) had condemned the alleged attack, saying it is an example of the racist abuse Asian people are suffering amid the coronavirus outbreak

‘So I kept my cool. I knew I took the best approach to ensure we got out of the situation safely.

‘It made angry but mostly disappointed that we even had to hear some of the things she was saying and then be physically assaulted.’

Videos of the incident have since gone viral, with thousands of Australians condemning the the racist act.

‘All the racists have something to do with failure in life,’ one person wrote.

‘That girl in grey ought to be ashamed of herself and her actions,’ said another.

‘I am so so sorry that you and your sister had to deal with this kind of disgusting inexcusable behaviour,’ another person commented.

Racial attacks in Australia amid the coronavirus pandemic

South Korean woman, 27, is brutally bashed by racist thugs who demanded to know if she’d self-isolated for two weeks

The woman was viciously attacked by a group of six people after they demanded how long she had been in the country.

The woman, 27, was left with scratches above her eyes and on her cheek following the attack after 10.45pm on Friday March 20.

She has been living in Australia on a working holiday visa for a year and was visiting Bundaberg when a group of youths accused her of bringing coronavirus to Australia, according to News Mail.

‘We realised they were being abusive about coronavirus,’ she said.

The woman said she tried to ignore the verbal spray. 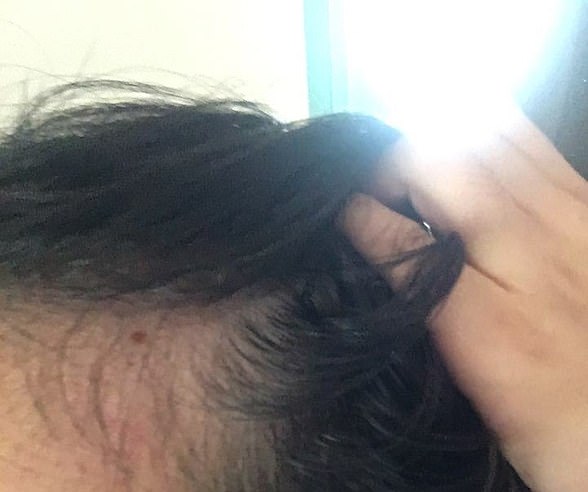 However then one of the youths grabbed her hair and shoved her to the ground.

She said she quickly tried to get up but was pushed down again. Extremely frightened, she then threatened to call the police.

This only aggravated the teenagers more and they began to swear at her and her friend.

She tried to defend herself – but the group began to beat her with their fists.

The woman then desperately tried to call Triple Zero as her hair was pulled and she was kicked in the face.

‘She said ‘go back to your country’ and she kicked me more than ten times,’ she said about one of the attackers.

Passersby then saved the pair – but they were also verbally assaulted before the group left the scene.

On March 27, a mother screamed racist abuse at commuters wearing masks to protect themselves from the coronavirus on a Melbourne train.

A bystander filmed the vile moment the woman yelled at two men to ‘go back to your own country’ as her young daughter begged for her to stop.

‘F*** your face mask, you disease carrying motherf***er,’ she yelled.

The video, which has been shared on Reddit, begins with the woman yelling at two young men.

Passengers can be seen walking away, asking: ‘How do you get security?’

The woman then screams ‘go back to your own country’. 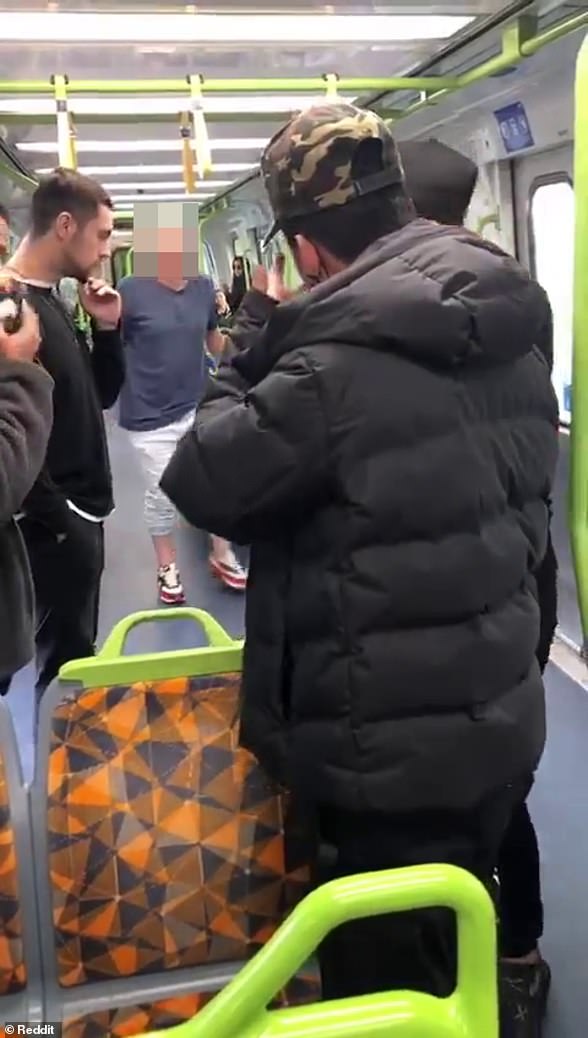 One of the men replies, telling her he is from ‘this country’.

She then continues to tell him he is not Australian.

Her daughter can be heard crying, pleading for her to stop.

‘Are you as Aussie as me?’ the woman asks. ‘F** your face mask you disease carrying motherf***er.’

Others on the train can be heard telling the passengers to ‘rise above it, it’s not worth it’.

When security board the train the woman yells: ‘This c*** is trying to go me.’

The entire train then yells ‘no’ in unison.